Michael Gove has been mercilessly mocked on Twitter after he quoted a Stormzy lyric as part of a bizarre feud with the grime star who recently criticised Boris Johnson.

Stormzy yesterday urged his followers to register to vote ahead of the general election as he said he will support Jeremy Corbyn’s Labour Party on December 12.

In a statement posted on Twitter he described Mr Johnson as a ‘sinister man with a long record of lying’.

Mr Gove hit back today and claimed Stormzy is a ‘far better rapper than he is a political analyst’.

The Tory heavyweight was then attacked by Labour’s shadow education secretary Angela Rayner who said the minister for the Cabinet Office was ‘c*** at both’ politics and rapping.

Mr Gove then responded to Ms Rayner by tweeting a lyric from Stormzy’s hit song ‘Shut Up’: ‘I set trends dem man copy.’

The decision to use Stormzy’s lyrics as his response prompted a wave of online ridicule.

Michael Gove said grime star Stormzy ‘is a far, far better rapper than he is a political analyst’ after he criticised Boris Johnson 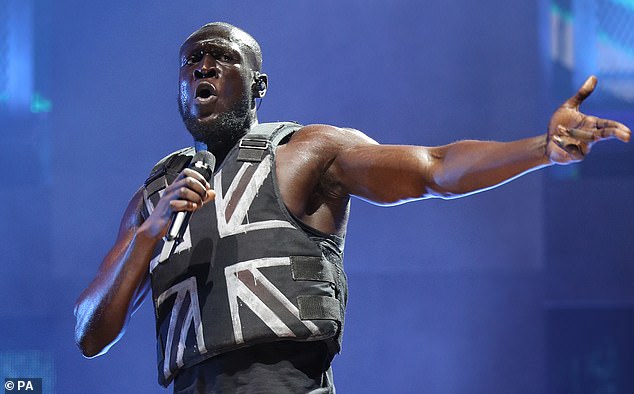 One Twitter user replied to Mr Gove: ‘Astounding how little you lot want young people’s votes. I’m fine with it but whewwww.’

Another demanded Mr Gove resign while another said that ‘if the kids weren’t voting for you before they certainly won’t be now’.

Stormzy said in a statement published on Twitter yesterday: ‘I will be registering to vote and I will be voting for Jeremy Corbyn.

‘There are several reasons as to why I’m voting for him – I would be here all day if I began to list them… but in my 26 years of life I have never trusted politicians or relied on them to be the bearers of hope and righteous people that we’ve needed them to be.

‘And for me, he is the first man in a position of power who is committed to giving the power back to the people and helping those who need a helping hand from the government the most.’

Stormzy has been a vocal critic of the Conservative government and at the Glastonbury music festival this year he led chants of ‘f*** Boris’ while wearing a Union Jack emblazoned stab-proof vest.

Mr Gove was asked about the rapper’s statement during an interview with TalkRadio this morning.

‘I think we again know that Stormzy, when he took to the stage at Glastonbury wearing a stab vest, he made clear what his political views were then,’ Mr Gove said.

‘He is a far, far better rapper than he is a political analyst.’

Stormzy is one of many musicians, artists, rappers and grime MCs who have given their support to Labour ahead of the snap poll on December 12.

Rappers Akala, Kano and Professor Green and singers Katy B and Peter Hooton of Liverpool group The Farm are among 39 artists, including Stormzy, who have signed a letter backing Mr Corbyn.

The letter to the Guardian newspaper said: ‘We’re not voting Labour in the naive hope that they will solve all the problems our communities face.

‘We vote because they offer an urgent alternative to the destructive policies of the Conservatives.’