Michael Gove on food banks: Poor have ‘only got themselves to blame’

Poor forced to use food banks? They’ve only got themselves to blame for making bad decisions, says Michael Gove

Families become so poor they are forced to turn to food banks because of their own ‘decisions’, Michael Gove has claimed.

The Education Secretary argued that people who find themselves unable to buy essentials, including food and school uniforms have themselves to blame for being unable ‘to manage their finances’.

The remarks were condemned by Labour and ‘insulting and out of touch’.

More than half a million people across Britain have turned to food banks to stave off hunger, according to charities.

Ministers have previously argued that a surge in demand has in part been fuelled by jobcentre staff being allowed to refer the unemployed to food banks for help.

Cuts to benefits, frozen or falling wages and rising living costs have been blamed in part for some people struggling to make ends meet.

Mr Gove was challenged over reports that one in four parents are having to borrow to pay for school uniforms and some food banks were distributing uniforms to struggling parents.

He  said he had recently visited a food bank in his Surrey Health constituency.

But he suggested that many cash-strapped families have brought their problems on themselves.

He added: ‘I appreciate that there are families who face considerable pressures.

‘Those pressures are often the result of decisions that they have taken which mean they are not best able to manage their finances.

‘We need to ensure that support is not just financial, and that the right decisions are made.’

Mr Gove was responding to a question from Labour frontbencher Luciana Berger who demanded to know ‘what more can he and his Government do to ensure that no students turn up to school embarrassed because they do not have the right clothes’. 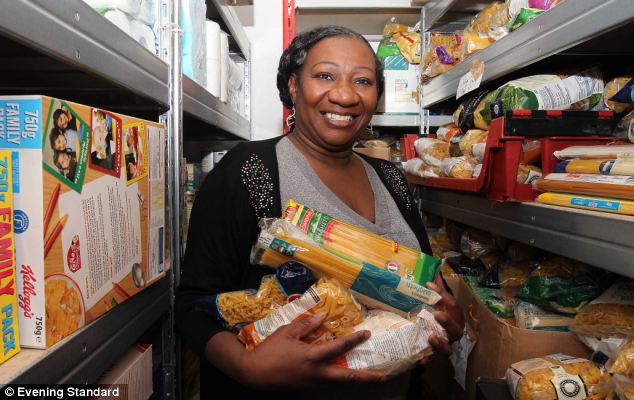 Demand: Charities say there has been a sharp increase in people turning to food banks, including this one in Southwark run by Felicia Boshorin

Labour seized on the response with  Miss Berger saying she was ’appalled’ by Mr Gove’s comments.

The Labour Liverpool MP said: ’People I have met are ashamed to have to turn to food banks.

’I vehemently disagree it is because they have mismanaged their finances.

’This Government has got no answer to the millions of parents that are really struggling to get by.’

Citizens Advice Chief Executive Gillian Guy said: ’It is appalling to suggest the rise of food banks is due to poor financial management.

‘People I have met are ashamed to have to turn to food banks.I vehemently disagree it is because they have mismanaged their finances.‘

’It’s a smack in the face to families who are working hard but can’t make ends meet, leaving them with no other option but to turn to food banks to feed their families.

’These comments are completely misjudged.’

Chris Johnes, director of Oxfam’s UK Poverty Programme, said: ‘Thousands are now turning to food banks, but they do not so out of choice, they do so when they have nowhere else to turn.

‘The staggering rise in the numbers of people using food banks is down to failings in the benefit system, too many low paid jobs and rising prices that are dragging huge numbers into poverty.’

In May a report by Church Action On Poverty and Oxfam suggested up to half of those seeking help were doing so as a direct result of having benefit payments delayed, reduced or withdrawn.

Other factors behind the increase on those using emergency help – the ‘hidden hungry’ – include rising food prices, unemployment and energy costs.

But Energy Secretary Ed Davey told MPs that it was ‘completely wrong to suggest that there is some sort of statistical link between the benefit reforms we’re making and the provision of food banks’.