Michael Holding slams England and Australia for not taking a knee

‘Just because West Indies have gone home you shouldn’t stop respecting the message’: Sky pundit Michael Holding SLAMS ‘lame’ England and Australia for not taking a knee in support of the Black Lives Matter movement

Michael Holding has accused England and Australia of showing a lack of respect to the Black Lives Matter movement and says their ‘excuses’ for not taking a knee are ‘lame.’

The fast bowling great, who made a passionate and articulate address on Sky about continued racism in sport and society at the start of the Test summer, hit out at cricket’s oldest adversaries on the eve of the first one-day international at Old Trafford.

Holding says cricket forgot about the issues highlighted in the wake of George Floyd’s death at the hands of a police officer in Minnesota ‘as soon as West Indies went home.’

And one of the most erudite voices in the game says the lack of any obvious gestures of support from the players on both sides since the start of England’s Test series against Pakistan suggests cricketers only took a knee to ‘jump on the bandwagon.’

‘Just because West Indies have gone home you shouldn’t stop respecting the message.’

England dropped the gesture after the third Test against West Indies in July, with the ECB instead announcing a range of actions to strengthen their inclusion and diversity strategy and ‘continue the changes needed to make cricket a game for everyone.’ 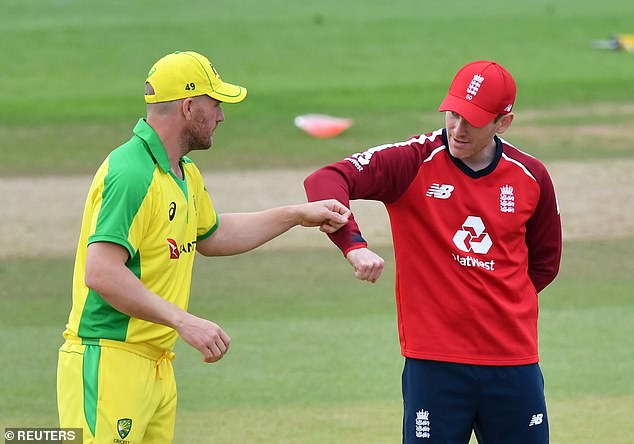 And Australian captain Aaron Finch said before the start of Australia’s Twenty20 series against England, their first matches since Floyd’s death, that he wanted to promote education rather than take a knee.

‘I have spoken to Eoin Morgan and we are not going to do specific gestures as has happened in the past,’ said Finch.

‘For us we are really proud to play a game that is celebrated all around the world and everyone can play it.

‘It doesn’t matter what race, religion or nationality you are from cricket is a game for everyone and I’m really proud of that.’

But Holding does not think that is good enough and said: ‘The ECB came out with a pretty lame statement as far as I’m concerned and now the Australia captain also issues a lame statement. 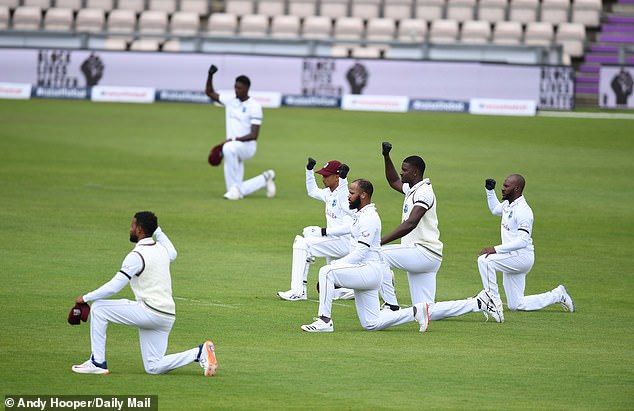 ‘What Aaron Finch’s comments said to me is that as long as sport is multi-racial then everything is OK.

‘So if the apartheid regime in South Africa had allowed multi-racial sport but kept the apartheid laws then everything would have been OK? No it wouldn’t have.

‘Education is important but you can’t just do nothing else. You have to keep the awareness going. Someone sees a person kneeling and they ask why. It keeps it going and going.

‘The England football team have continued to do it. All over the world people are doing it. So why have the cricket team stopped? I can’t accept any flimsy excuse.’

Holding was asked if he had any concerns about the politicising of the BLM movement on the day the Premier League announced the BLM logo will this season be replaced on players shirts with the message ‘No room for racism’ but said: ‘I don’t care about the politics behind the movement.

‘I think people need to keep on recognising that things need to change. You can’t just do something for a week or two and think “OK, I’ve done my bit.” If that’s your attitude don’t bother doing it at all.’