An Australian artist’s work featuring a pickle from a McDonalds’ cheeseburger stuck to a ceiling has raised the age-old question: what is art?

It displays a small slice of pickle on a pristine white ceiling as part of the exhibit of modern abstract works on show until July 30.

‘People don’t have to think it’s art if they don’t want to,’ Mr Moore said.

‘Anything can be an artwork, but not everything is. That’s often the point.’

Griffin’s work is well known for ‘[combining] a wry humour with a DIY sensibility in his sculptures, photography, videos and installations’, notes the Museum of Contemporary Art.

‘His playful approach, often blending references from high and popular culture, disguises a more incisive critique of truth, authenticity and the construction of images in a digital age.’

‘Meaning and value are things that we as humans create together – in art or any other part of life,’ Mr Moore added.

‘What makes an artwork is when whatever an artist makes or does is able to be used as art: when the object or action is thought about or talked about as an artwork. And that’s what we are doing here, which I think is great.’

An image of the work shared to Instagram drew a mostly positive response.

‘I can taste this photo,’ one person commented.

‘Perfection,’ another person appraised the work.

Griffin described his work on his Instagram as, ‘a sculpture comprising the slice of pickle from a McDonalds cheeseburger flung onto the ceiling’.

One of Griffin’s previous works, ‘Anywhere but here’, featured an old plastic chair – similar to one you’d see in a school classroom – precariously balanced on a ceramic dolphin, with a balloon hovering above blown by a hairdryer with the words ‘anywhere but here’ written on it.

Another one of his works, ‘Aske’, was an interactive piece that MCA said, ‘responds to human presence with unexpected and alarming action’.

It was made out of a cardboard cylinder with a picture of a face with its eyes cut out. When an onlooker approached, ping pong balls would shoot out of the empty eye sockets.

This was done through a movement sensor connected to a hairdryer propelling the ping pong balls upwards.

Other abstract works currently on show at MCA in Sydney, are from Juliette Blightman, Prudence Flint and Yona Lee.

Flint’s work titled ‘Banana’ is a stencil on a piece of paper depicting a lady sitting down eating a banana.

Juliette Blightman’s work ‘Pseudopanax’, meanwhile, features a 60-minute loop of sound played through a small speaker – starting every hour on the hour – situated next to a potted plant.

While it might be questioned whether a slice of pickle stuck to a ceiling is really ‘art’, modern abstract works in various forms can attract serious money among collectors.

In 2021, for instance, a digital artwork which only exists as a JPG file sold for $69.3million after being listed for just $100 – making its US creator Beeple the third most valuable living artist behind Jeff Koons and David Hockney.

‘Everydays: The First 5,000 Days’ by artist Beeple became the most expensive ever ‘non-fungible token’ after being sold at auction for a record $69.3million, fetching more than physical works by many better-known artists

Another recent sale in 2021 was of an invisible sculpture which fetched more than $22,000. 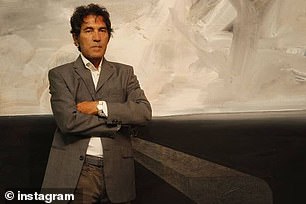 Sardinian-born Salvatore Garau, 67, sold the artwork, titled ‘I am’, to an unidentified buyer earlier this month (pictured, Garau in 2016)

Sardinian-born Salvatore Garau, 67, sold the artwork, titled ‘I am’, to an unidentified buyer and gave them a certificate of authenticity to prove it was real.

How much money Griffin’s Pickle would attract remains an open question, particularly as most people will be able to easily recreate it at their nearest fast food outlet.