An upstate New York man who has to be out of his parents’ home in a week has a new excuse for why he should be given more time – he can’t afford moving boxes.

Michael Rotondo, the 30-year-old man ordered by a judge to vacate his parent’s Camillus home, learned on Thursday that he must be completely moved out by noon on June 1.

Rotondo, who is jobless, told Syracuse.com that the deadline may be an issue because he doesn’t have money to pay for moving boxes.

‘I need to start packing my boxes so I can move,’ he told the outlet. ‘But I have to pay for the boxes, which might be a problem.’

Michael Rotondo, 30, has until June 1 to move out of his parents’ home. He said that’s not enough time because he can’t afford moving boxes 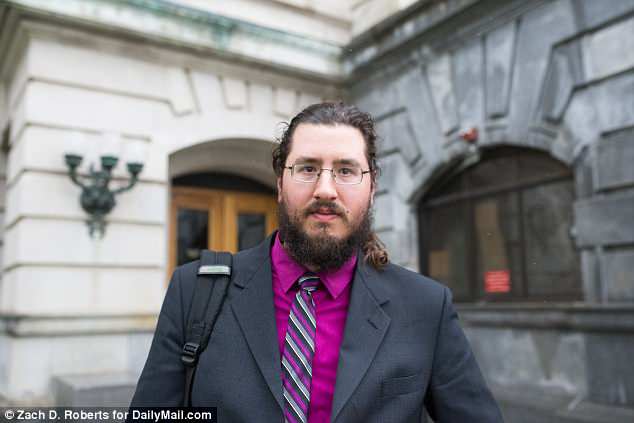 Rotondo spoke with DailyMail.com after he was ordered out of his parents’ home by a judge in Onondaga County, New York court on Tuesday

Villa Italian Kitchen has offered Rotondo a job to help the 30-year-old man, who says part of the reason he can’t move out of his parents’ home is because he is jobless

Rotondo said he knows if he disobeys the court order he could be forcibly put out the home by sheriff deputies, but said June 1 is not enough time for him to get his stuff together and find another place to live.

‘I really don’t understand how that’s necessary,’ he said. ‘I’m aware that that’s how the ax falls. I’m going to try to resolve this as civilly as possible.’

To help with some of Rotondo’s troubles a New York pizzeria chain offered the man a job. In a Facebook post on Thursday, Andrew Steinberg, chief operating officer of Villa Italian Kitchen, said he was offering Rotondo a job because he knows it’s ‘tough out there’.

‘At Villa, we feel for millennials, across the board,’ Steinberg wrote. ‘With that said…Michael, hey dude. We are offering you a store-level gig, complete with extensive training to get you up to speed, at any one of our 250 locations worldwide.’

Steinberg said he was willing to give Rotondo a ‘signing bonus’ of $1,101, a dollar more than the man’s parents offered to give him if he moved out. 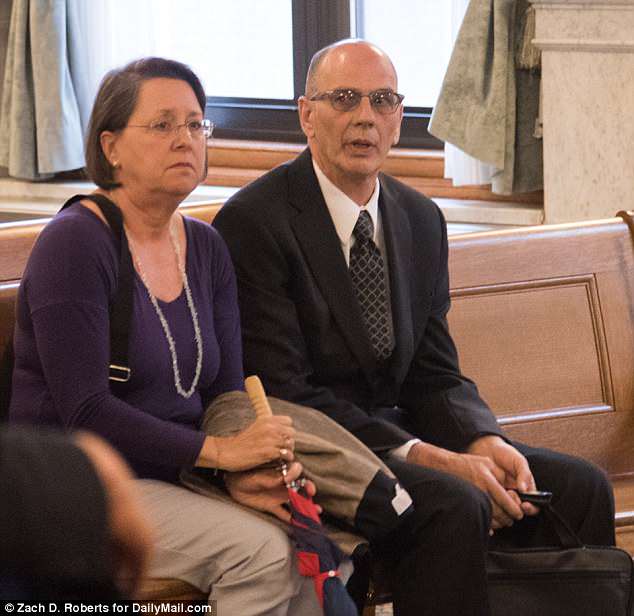 His parents, Christina and Mark Rotondo, are pictured on the right. They say they have been trying to kick him out of their house for months 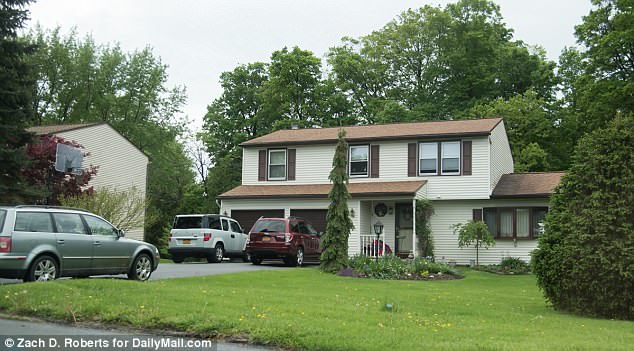 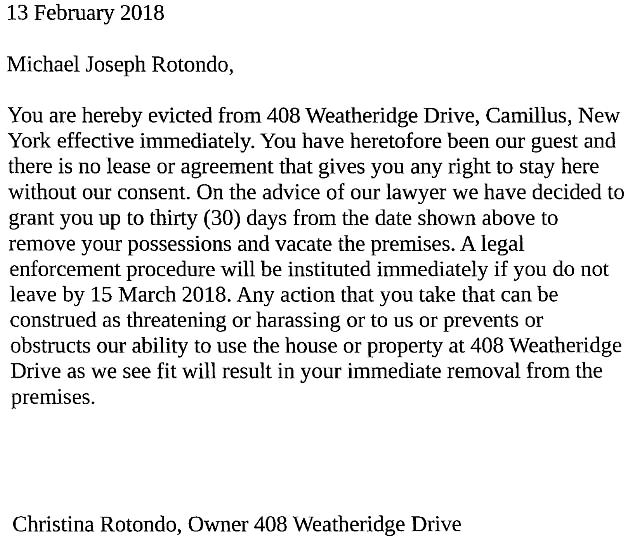 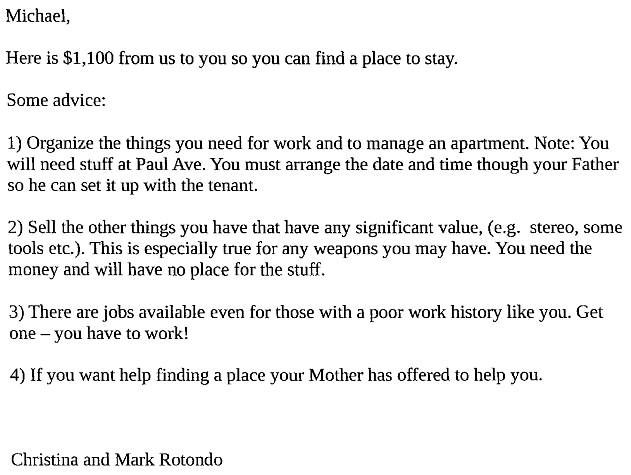 ‘We heard your parents offered you $1,100 to get out. We’ll do you one better. Literally, one. Offer from us is on the table for $1,101 to come join our team. Consider it a signing bonus. We gotchu, bud,’ the Facebook post read.

Rotondo has not said if he plans to take Villa Italian Kitchen up on their offer.

In an interview with DailyMail.com earlier this week, Rotondo said his issues with his parents are tied to his custody battle over his son.

Michael says he lost custody of his son, whose age he wouldn’t disclose, back in September. The boy now lives with his mother full time, who Michael says he was never married to, or in a relationship with.

He says he immediately filed an appeal as a ‘poor person’ so that his court fees could be waived going forward. But he says his parents complicated matters when they said he needed a job and health insurance if he was to continue living with them.

Michael refused, saying that his job at the moment was getting his son back. 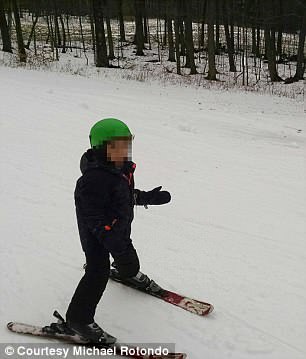 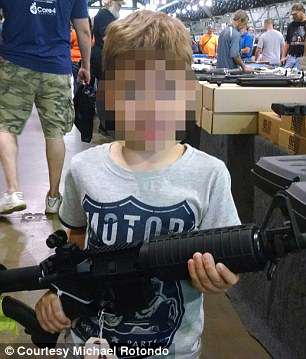 Rotondo’s son is pictured left and right. He lost custody last year and said he is fighting to regain custody 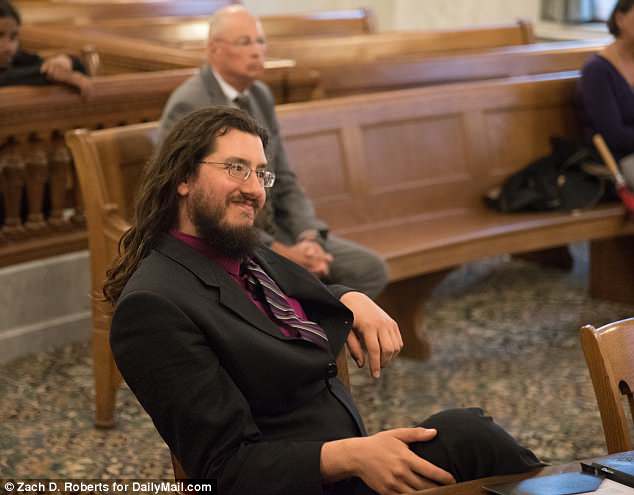 When they offered to pay for his health insurance, Michael explained that he couldn’t take that money because it would compromise getting the ‘poor person’ status.

Shortly after, he says his parents stopped providing food for him, and cut off his cellphone. They also said he couldn’t use the laundry machines in the house anymore.

His parents also went to court to try to get visitation of their grandchild. Michael says it was two days after that hearing that he got his first letter, in which his parents said they had ‘decided that you must leave this house immediately’.

They went on to send him four more letters, but Michael refused to budge.