‘My mum is here and she would have loved to see me drive!’ Michael Schumacher’s son Mick says his first taste of F1 was still useful despite not getting out on the track as bad weather puts paid to first two Eifel Grand Prix practice sessions

Mick Schumacher was left disappointed after his Formula One debut was delayed with his mum Corinna watching on.

The son of seven-time world champion Michael Schumacher was due to get a first taste of F1 by driving in one of Friday’s Eifel Grand Prix practice sessions with Alfa Romeo.

But rain and fog at the Nurburgring in Germany saw the cancellation of all Friday’s action because conditions prevented the medical helicopter from flying. 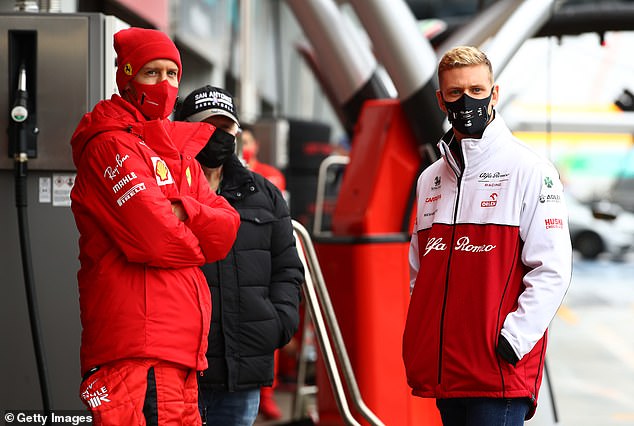 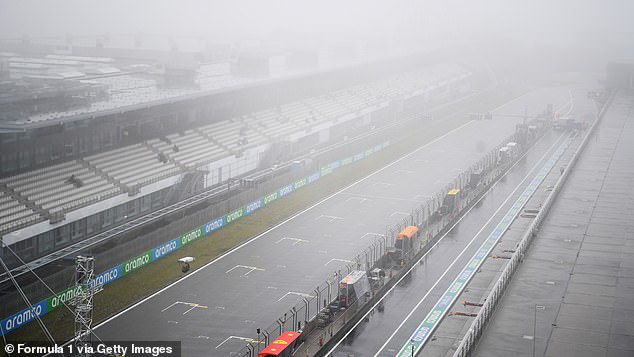 Schumacher Jnr, who leads the Formula Two standings and is part of Ferrari’s young driver programme, is expected to be handed the Alfa race seat next year.

He said: ‘It has been a shame not to be able to get out, we knew the forecast did not look great, this time of year, we knew it might be wet but the preparation was good and we did the meetings and got so much knowledge from it. It has been very helpful.

‘We have to wait and see how things develop. We have lots of tracks coming up that have not been driven on and the usual drivers need their time in the car.

‘An opportunity would be great. F1 is the goal and the dream.

‘It is special to be here and I would have loved to get out and drive in front of the fans – hopefully next time. 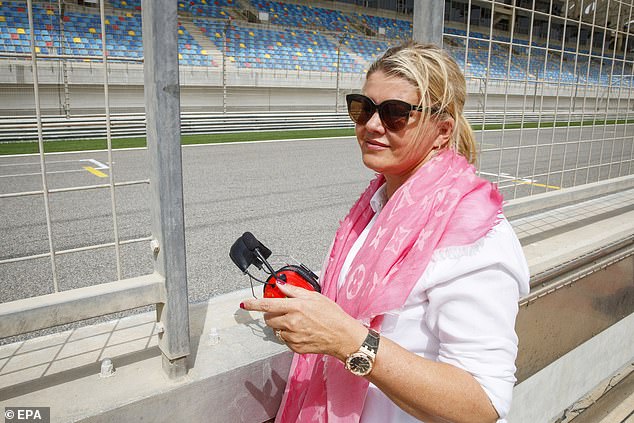 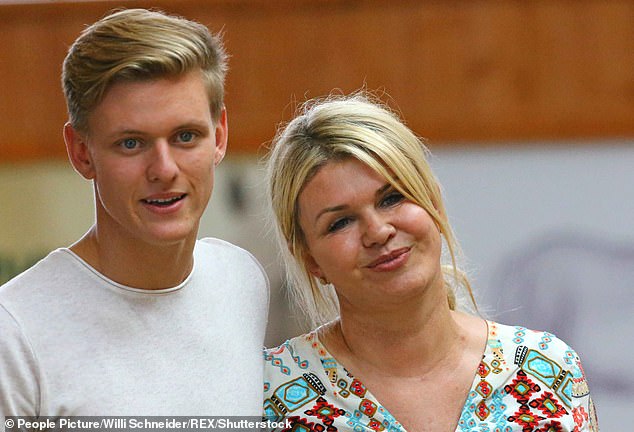 ‘I have my mum here with me who is watching and she would have loved to see me drive, so maybe another time.’

He is now expected to be granted his debut in practice for the season’s final race in Abu Dhabi.

British racer Callum Ilott was also denied his opportunity to get a first taste of F1 with Haas on Friday.

The poor weather and visibility meant there was no quick route to a nearby hospital for the helicopter had there been an accident.

Schumacher, 21, says that if he does win a place in Formula One it will be down to hard work rather than his famous name. 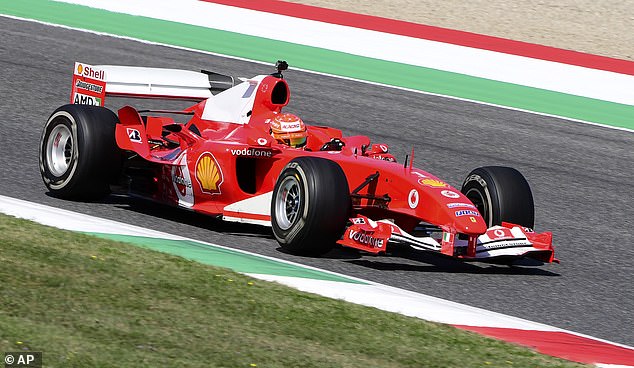 He said: ‘The pressure is always there no matter what your name is. My name won’t bring me the championship but it is the work behind the scenes.

‘We are doing a very good job and it proves we are in the right spot at the right time.’

Schumacher Snr has been recovering from a horrific skiing accident since 2013 which saw him suffer from head injuries and placed into a medically induced coma.

His health is now shrouded in mystery but recent reports have claimed he has been moved to a £27m mansion in Majorca.

Sebastian Vettel paid tribute to the seven-time champion with a customised helmet design, which he showed to Schumacher Jnr on Friday. 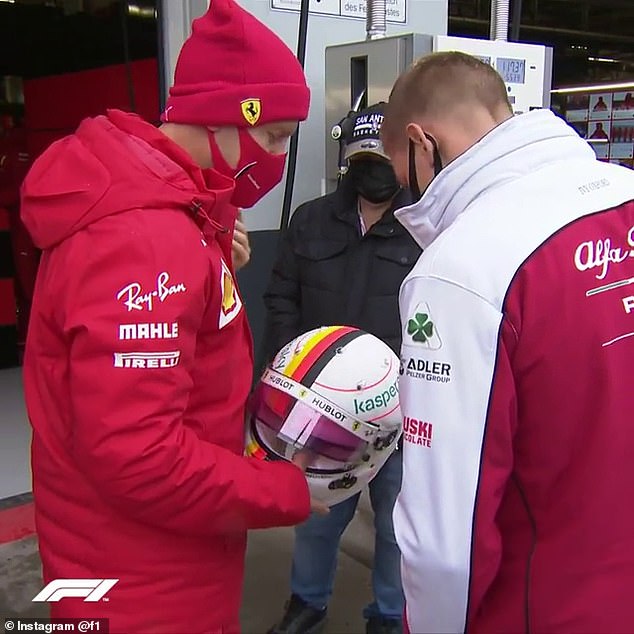 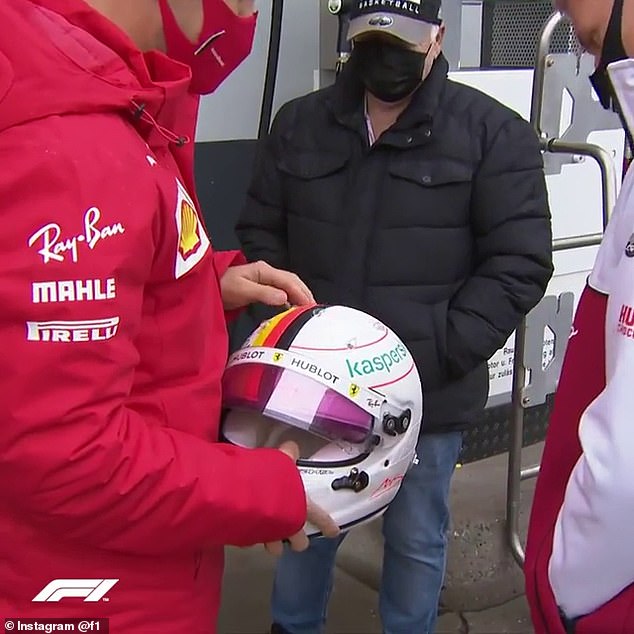 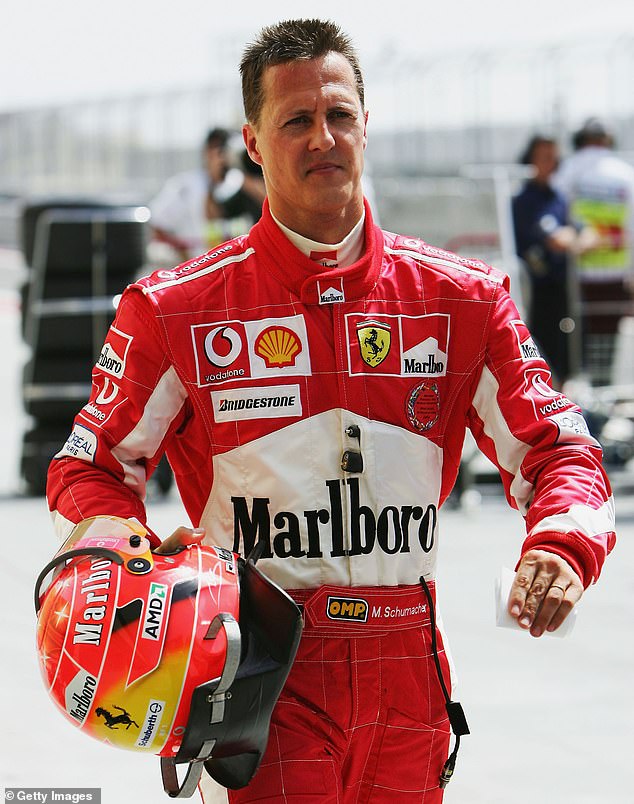 A clip posted by Formula One’s Instagram page sees Mick observing as Vettel points out the various design details around the helmet that were based on his father’s.

Schumacher’s signature can also be found on the sides with a Chinese dragon drawn at the top. Vettel keeps his German flag stripe going through the middle of the helmet, but managed to fuse both designs together.