A Michelin starred restaurant boss has slammed the government’s ‘Eat Out to Help Out’ scheme as it was today revealed that police officers are exploiting the scheme to tuck in to half-price meals at work canteens.

David Moore, owner of Pied à Terre in London, said the scheme should be for small restaurants  and slammed the use of taxpayers money in private canteens as ‘shocking’.

It comes as it was today revealed officers working for police forces in Hampshire and Surrey can enjoy 50 per cent off meals and drinks at their in-house canteens on Mondays, Tuesdays and Wednesday throughout August.

The private company supplying catering to the forces’ largest bases signed up for the Eat Out to Help Out scheme – in which the government pays back the value of the discount from the public purse.

However the public cannot eat at the canteens, leading critics such as Mr Moore to slam the company’s use of the scheme.

David Moore, owner of Pied à Terre in London, said the scheme should be for small restaurants and slammed the use of taxpayers money in private canteens as ‘shocking’

Mr Moore argued that the government’s scheme was designed to help struggling cafes and restaurants, which might otherwise close, attract diners back, not to be exploited by police canteens with a ‘captive’ audience who would eat there anyway.

The 56-year-old, who has worked alongside world-renowned chefs such as Raymond Blanc and who was forced to shut his restaurant due to coronavirus, said: ‘It’s shocking. It isn’t right.

‘It is definitely not what was meant by the Eat Out to Help Out scheme. There should have been some exceptions.

‘It’s for small restaurants. It’s not meant to help Five Guys form a queue around the block or a police officer who should be eating in the community anyway and supporting the community.’

Mr Moore argues that whilst the scheme is a ‘bright idea’ there are loopholes which are being exploited.

He said: ‘When you have a broad stroke initiative like this and the short time frame in which it’s been put together I don’t think there are the checks and balances in place to police it properly.

‘That’s where you get operators and institutions thinking that they can jump on the bandwagon as well.

‘The money is going to the wrong people. I would never want to say the police are not deserving of a hand out or help, they are our great peacekeepers and do a fantastic job.

‘But it does feel wrong. It’s not the police, it’s the companies who run these canteens who are taking advantage. 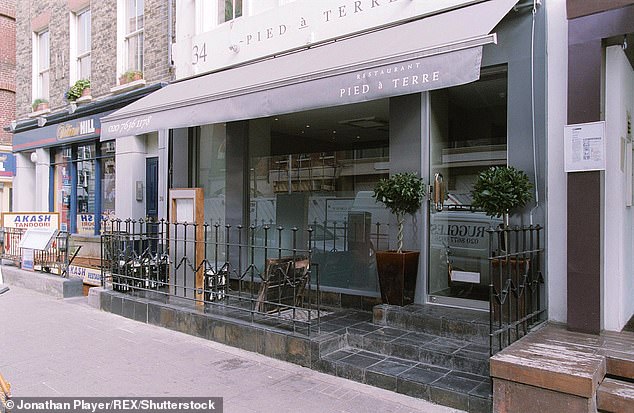 Mr Moore, 56, was forced to close his Michelin starred Pied à Terre in the midst of the coronavirus pandemic

‘When you hear that the operators are already subsidised, it just seems ridiculous.’

Talking of police canteens already having a ‘captive audience’, he said: ‘They are able to feed their staff – with food which is already subsidised – and then have the great British taxpayer help out.

‘The captive audience doesn’t seem right. There should have been a tick box – if you are feeding a captive audience then you shouldn’t be able to do this because they are going to be there anyway.’

Mr Moore, who has run his restaurant for 29 years, added: ‘I feel constantly let down, there is no one who listens to the small businessman. The little guy doesn’t get helped out, that’s the problem.’

His comments come after it was revealed five locations operated by Hampshire Constabulary are implementing the scheme, including its police training centre.

Surrey Police has also revealed the canteen at their headquarters in Guildford is taking part in the deal.

A spokeswoman for Hampshire Constabulary said: ‘The PCC’s [police and crime commissioner] office manages the police estate, including appointing the external suppliers for police canteens.

‘These are located at the larger sites (Southampton Central, Northern and Eastern PICs, the Police and Fire HQ in Eastleigh, and the police training centre in Netley). 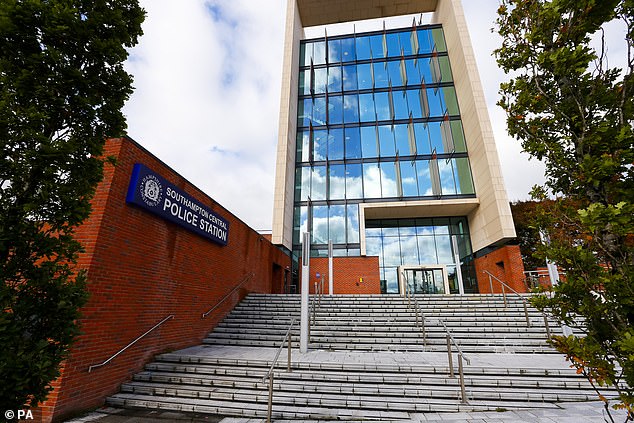 Hampshire Constabulary say the discounts are in place at Southampton Central Police Station (pictured), Northern and Eastern PICs, the Police and Fire HQ in Eastleigh and its police training centre in Netley

‘One supplier is currently contracted to provide food and beverage services at those sites.

A force spokesman also said: ‘Members of the public cannot access [the canteens] and can’t go in there to have a meal.

A spokeswoman for Surrey Police said: ‘The restaurant at our headquarters is taking part in the Government initiative ‘Eat Out to Help Out’.’

Guidelines for the scheme on the government website say, ‘the scheme discount can be applied to food and drink that is sold to employees or students for immediate consumption on premises’.

‘Eat out to help out’ applies to eat-in food and drink on Monday to Wednesdays at more than 72,000 venues.

The discount is capped at £10 per person and does not apply to alcohol.