Michelle Obama revealed she hopes to meet the royal baby ‘soon’ as she sent her congratulations to the Duke and Duchess of Cambridge.

The 54-year-old joked she wanted to be introduced to the prince at a ‘Kensington Palace pajama party’, adding: ‘I’ll wear my robe!’

Pyjama party! Barack and Michelle Obama met Prince George at Kensington Palace in 2016. Mrs Obama shared this photo of the meeting alongside a post congratulating the Cambridges 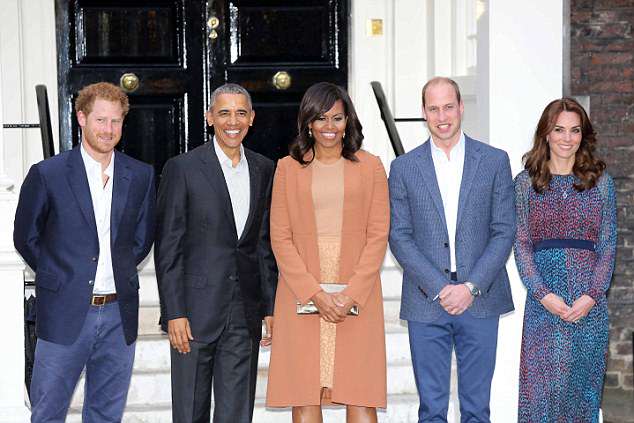 Close: The Obamas enjoy a friendly relationship with the Duke and Duchess of Cambridge, right, and Prince Harry, left. The five pose outside Kensington Palace in 2016

The caption accompanied a sweet photo of when she and President Obama, 56, met Prince George at the royal residence in 2016.

The toddler prince wore his white dressing gown, pyjama bottoms and slippers for the meeting.

In the image, President and Mrs Obama are seen crouching down with Prince William to shake Prince George’s hand.

The couple also presented the young prince with a beautiful wooden rocking horse during the visit. Casual meeting: The Obamas, the Cambridges and Prince Harry at Kensington Palace in 2016

The Obamas enjoy a close relationship with the Cambridges and Prince Harry, with whom they have collaborated on a number of philanthropic and charitable causes.

In a surprise move, both President and Mrs Obama were left off the guest list for the royal wedding of Harry and Meghan Markle next month.

The situation has left royal watchers wondering whether the Obamas, who are close to the prince, may have done the ‘decent thing’ and stepped aside so as not to ruffle the feathers of Mr Trump. Family of five! The Duke and Duchess of Cambridge welcomed a son yesterday, pictured Heading home: William and Kate returned to Kensington Palace at around 6pm yesterday

The Duke and Duchess of Cambridge left the Lindo Wing, at St Mary’s Hospital in Paddington, with their newborn son at around 6pm on Monday night.

The prince’s name has yet to be revealed but bookmakers’ odds suggest he could be called James.

Royal supporters were treated to a rare sighting of Prince George, four, and Princess Charlotte, two, when Prince William, 35, brought his two eldest children to meet their younger brother.

While Kate, 36, is expected to attend the royal wedding of Prince Harry, 33, and Meghan Markle, 36, next month, she will then take time away from the spotlight to focus on spending time with her three young children, aides have confirmed.