Michelle Yeoh is riding a wave on the career front, as the Malaysian actress navigates shooting two films in recent months, and wrapping another.

And on Friday she confirmed she has now been added to the cast of the epic musical fantasy film Wicked, which has already started to shoot principal photography.

That confirmation came on the same day she was being honored with the 15th Annual Kirk Douglas Award For Excellence In Film at the Santa Barbara International Film Festival.

Honored: Michelle Yeoh, 60, was presented with the 15th annual Kirk Douglas Award For Excellence In Film at the Santa Barbara International Film Festival in Santa Barbara on Friday

The award, which benefits Santa Barbara International Film Festival’s year-round educational programs, was presented during a black-tie dinner at the Ritz-Carlton Bacara, Santa Barbara, according to Noozhawk.

Ahead of the ceremony, the actress took to the red carpet to strut her stuff in front of adoring photographers in a white short-sleeve gown.

She spiced up the number by wearing a gold avant-garde choker necklace.

Rounding out her look, Yeoh pulled her long raven tresses back off of her face and into a loose ponytail. 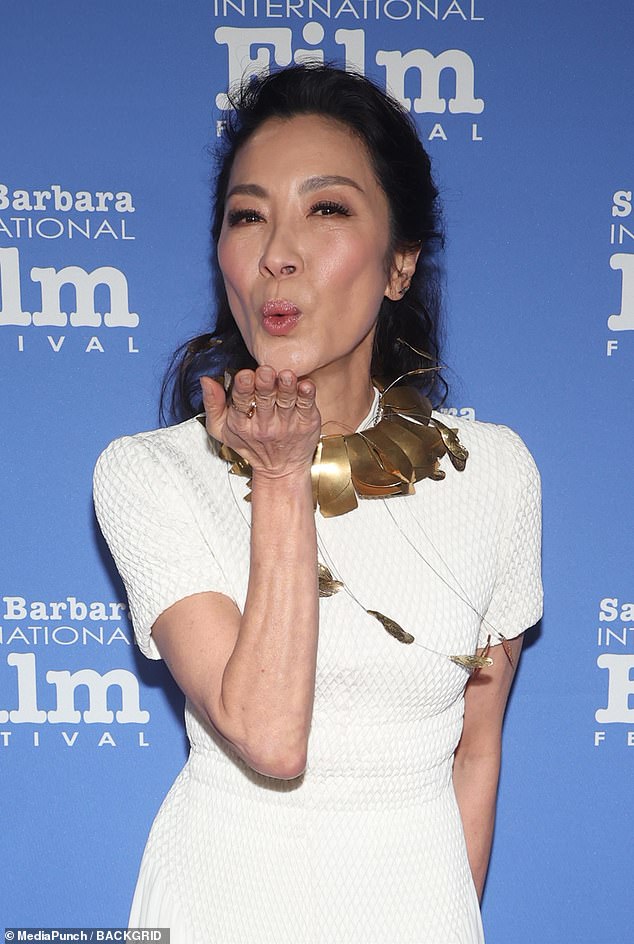 Classy: The Malaysian actress, 60, took time out to blow a kiss towards the camera 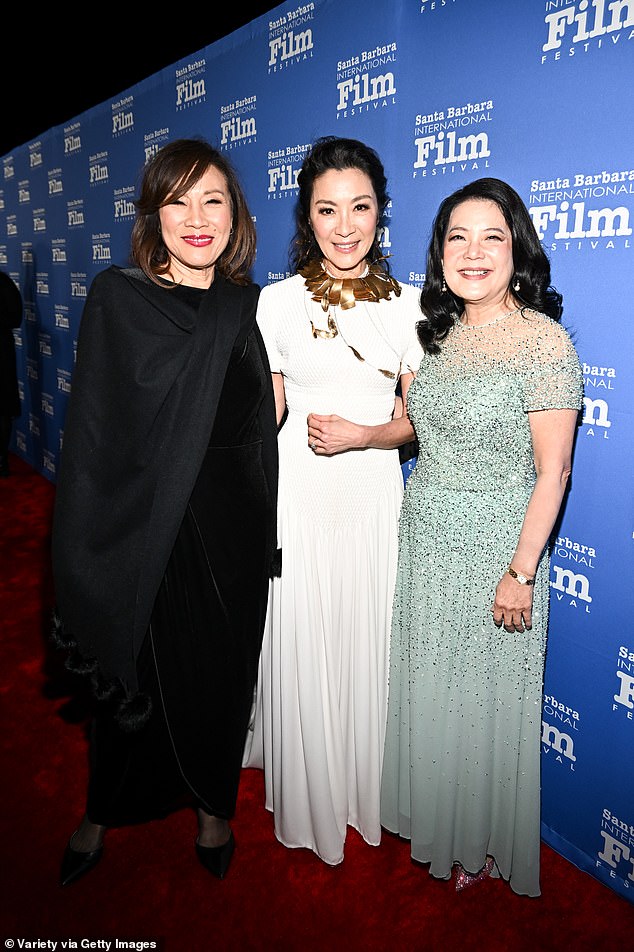 Supportive: Malaysian actress Janet Yang and executive Julia Gouw shared a moment with the actres on the red carpet ahead of the ceremony

After getting playful with the camera by blowing a kiss or two, Yeoh was joined on the red carpet by her Everything Everywhere At At Once crew.

Producer Jonathan Wang and the film’s co-directors Daniel Scheinert Daniel Kwan struck a few poses with the leading lady, and in the process brought their brand of comedy by making funny faces and hand gestures.

At one point, Yeoh jokingly grabbed Scheinert and Kwan by the throat and began to act like she was going to manhandle them.

Actor Christopher Loyd and his wife Lisa Loiacono also stepped out in front of photographers for a series of snaps together looking elegant in their respective black ensembles. 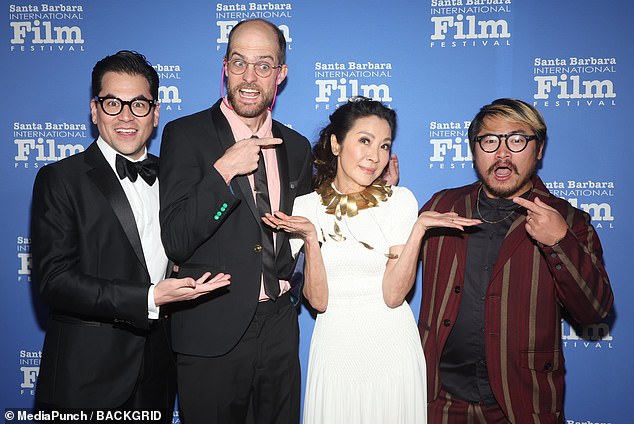 Yeoh was joined on the red carpet by her Everything Everywhere At At Once crew, who proceeded to show off their comedic touches; Producer Jonathan Wang and the film’s co-directors Daniel Scheinert Daniel Kwan flanked the actress 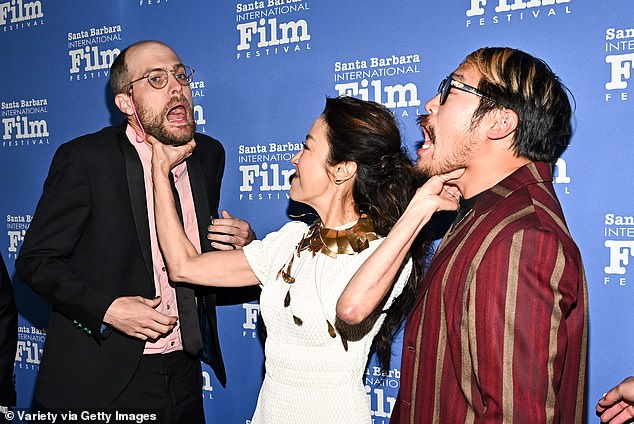 Play time: Yeoh got some revenge and jokingly grabbed Scheinert and Kwan by the throat

She has since gone on to star in a number of blockbusters and acclaimed films, including the film Everything Everywhere All At Once (2022), which has gone on to become a bonafide hit grossing $103.4 million on a $25 million budget.

After joining the cast for Avatar 3, which wrapped in December 2020, Yeoh is currently working on the fourth installment that began two months ago in September.

She has also been shooting the mystery film A Haunting In Venice since late October, with Kenneth Branagh serving double duty as director and one of the stars alongside Jamie Dornan and Tina Fey.

A Haunting In Venice is slated to premiere on September 15, 2023. 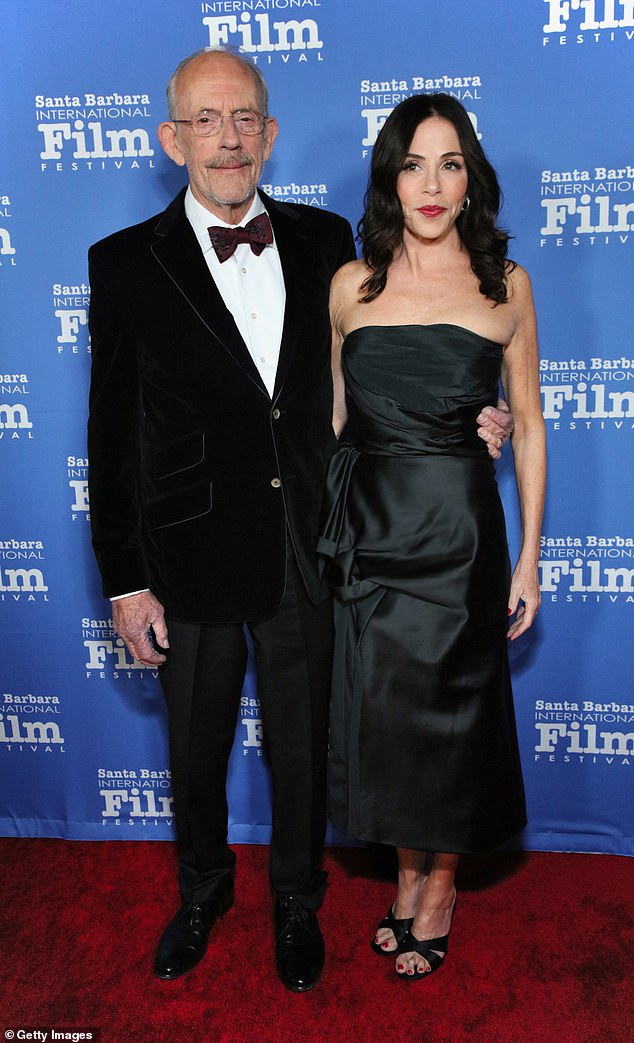 Star power: Christopher Loyd and his wife Lisa Loiacono were also on hand for the event 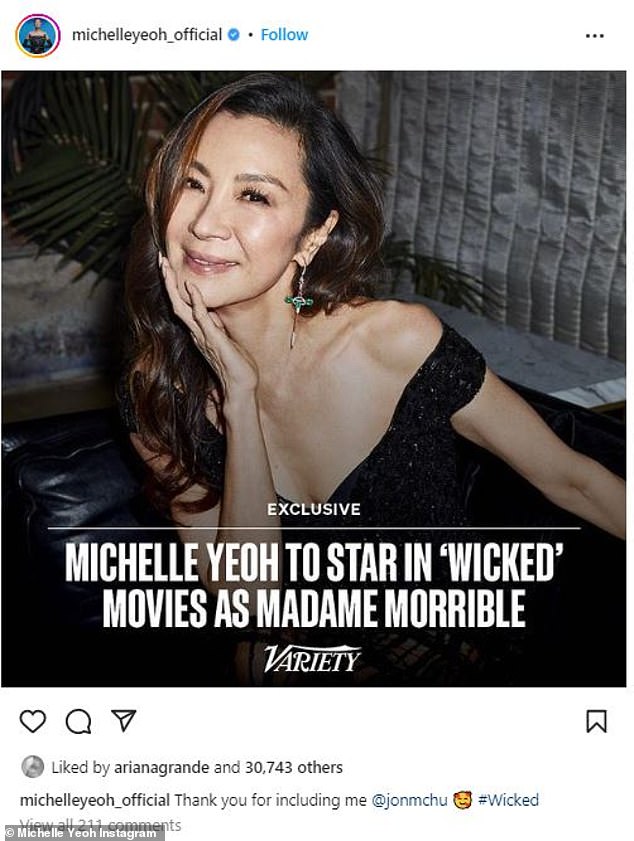 The actress confirmed she had joined the cast of Wicked, which has already begun shooting with John M. Chu serving as the director

On top of those films, Yeoh confirmed she’s been added to the Wicked cast, scoring the role of Madame Morrible

Ariana Grande plays Glinda and Cynthia Erivo portrays Elphaba in the John M. Chu film that’s being shot in two-parts, with the first expected to premiere on Christmas of 2024.

In October, Yeoh wrapped on Transformer: Rise Of The Beasts, with the film now being slated to be released in June 2023.

Along with Everything Everywhere All At Once, Yeoh’s busy 2022 also included voicing roles in the computer-animated comedy film Minions: The Rose Of Gru, the animated film Paws Of Fury: The Legend of Hank, both of which were released in July, and the fantasy film The School For Good And Evil. 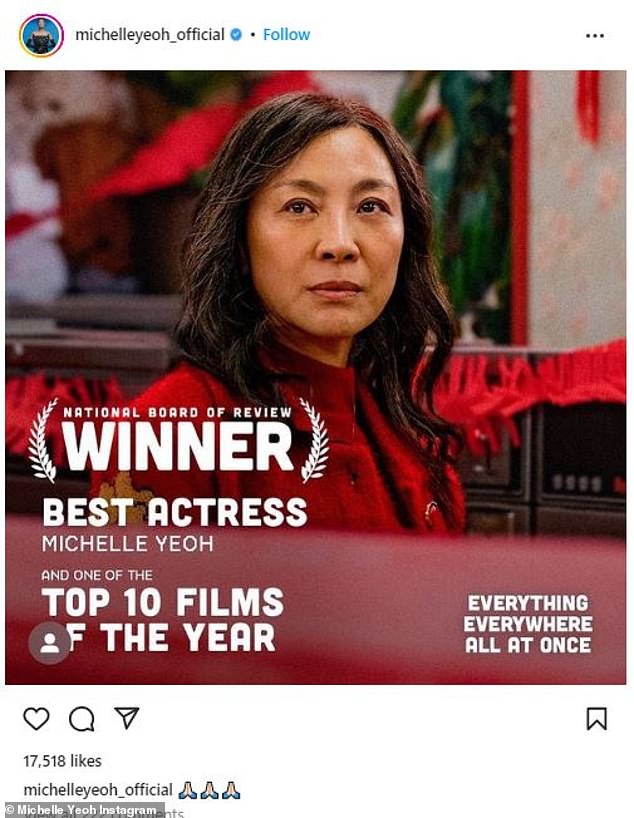 Acclaimed: Yeoh has been celebrated for her performance in the absurdist comedy-drama film Everything Everywhere All At Once, which was released in late March