A Michigan farmer has become the sixth person to die in the state’s historic outbreak of the mosquito-borne Eastern equine encephalitis (EEE) virus.

After being rushed to the ER by ambulance on August 19 with a very high fever, Jim lost consciousness and never awoke.

EEE is infamous for causing life-threatening brain swelling that comes on suddenly and kills one third of those who contract the disease after being bitten by a mosquito.

This year, as temperatures rise and people encroach on the swampy natural habitats of mosquitoes, several states have seen nearly unprecedented numbers of cases, including Massachusetts with 12 cases and Michigan with 10 cases and six deaths.

Jim Whitmore died on Saturday, becoming the sixth person in Michigan killed by the mosquito-borne virus, Eastern equine encephalitis, that has been plaguing unprecedented numbers of Americans this year

Nationwide in 2019, the Centers for Disease Control and Prevention (CDC) has received reports of 36 cases of EEE.

In a typical year, US health officials would expect to see just seven cases.

The last year of unusually high numbers of EEE cases was 2012, when 15 cases were confirmed by the agency – less than half the number seen in 2019.

Like many infectious diseases, EEE tends to strike the old, the young and those with compromised immune systems, initially triggering a high fever and flu-like symptoms.

But if the virus travels up to the brain, it can cause brain swelling – or encephalitis – which, in turn, causes seizures and thrust a victim into a coma.

There is no treatment for the virus which it reaches this disease stage.

All doctors can do is provide support in the form a ventilator and IV fluids and hope that the devastating swelling subsides.

If it does, patients are more often than not left with neurological damage. In a third of cases it never does, and those patients typically die within two to 10 days – but may die much later. 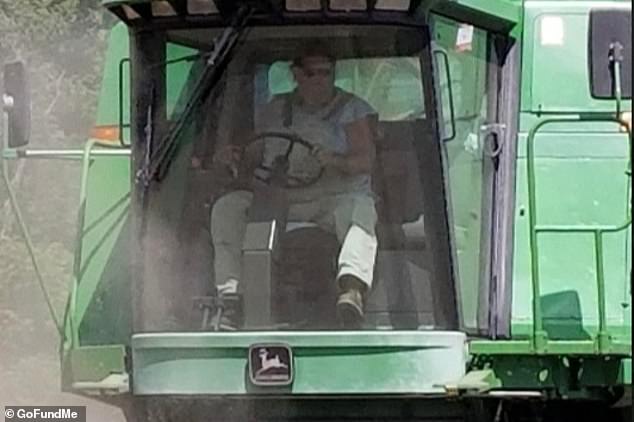 A fourth generation farmer, Jim was likely working his land when he was bitten by a mosquito infected with EEE

Whitright’s fight was much longer but with little variation.

On October 10, 52 days after he was first brought to the hospital, family friend Amanda LaFountain wrote on the GoFundMe set up for the family that little had changed.

‘There is not a lot to update on behalf of Jim, other than he is still hanging in there and fighting the good fight,’ she wrote of the fourth generation farmer.

‘Some days/weeks are better than others and often times feels like it is one step forward and two steps back.

‘We’re hoping and patiently waiting for the day he can wake up.’

It’s undoubtedly agonizing for families to watch their loved ones fight an illness with no treatment or even a vaccine that could have prevented the disease from taking hold in the first place.

As cases of the infection surged in Florida, New York, Michigan, North Carolina Georgia and Massachusetts, Senators Markey and Warren of the latter state requested information from federal researchers about any related viruses to EEE, in the hopes they might find some clues to treating or preventing the disease.

But no developments have materialized, and there was no saving treatment for Whitright.

Another farmer, Bill Teichman, contracted EEE around the same time, according to WNDU. Teichman is ostensibly still battling the condition but his exact status is unclear.

Though no treatments or vaccines have been developed, the virus’s activity is already dying down as winter’s falling temperatures sweep the country, killing off the mosquitoes that carry the disease.