Michigan father, 64, finds $43,000 in cash stuffed in second-hand couch set that he bought for his man cave – and returns it ALL to the woman whose late grandfather hid it there in secret

A Michigan grandfather has been praised for his honesty after finding $43,000 in cash stuffed in the cushions of a second-hand couch he bought for his man cave then tracking down the sofa’s seller and returning every penny.

Howard Kirby, 64, bought the couch and an ottoman for $70 from Habitat for Humanity in Owosso, Michigan. He routinely shops in the store and was picking up items for his man cave.

After a few weeks of finding the ottoman uncomfortable, he and his daughter-in-law decided to unzip the cushion covers and look inside.

They were flabbergasted to find $43,000 in cash inside a box.

Howard Kirby found the money stuffed inside the couch after buying it from Habitat for Humanity in Owosso, Michigan. Image courtesy of Fox 10

Kirby spoke with a lawyer who told him he had no legal right to return it. But he said his faith got the better of him.

‘The Holy Spirit just came over me and said, “No, that’s really not yours,”‘ he said.

Kirby took the money in a box back to the store where he’d bought it and asked them to track down the person who donated it.

They traced the sofa back to Kim Fauth-Newberry whose late grandfather owned the couch.

She had no idea the money was there when she gave it to the charity store after his death.

This week, they all returned to the store to meet and for Kirby to hand the cash back over to Fauth-Newberry and her family. 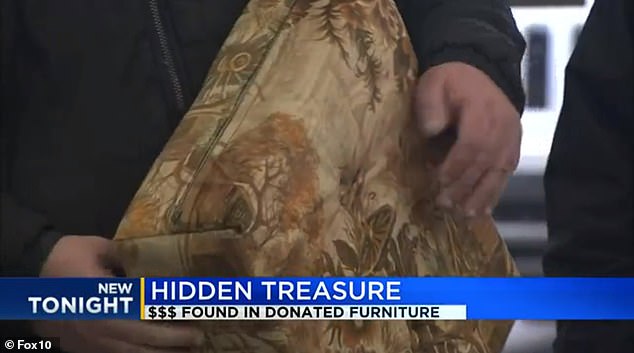 This was one of the cushions where he discovered the money. He bought the set for $70 to put in his man cave 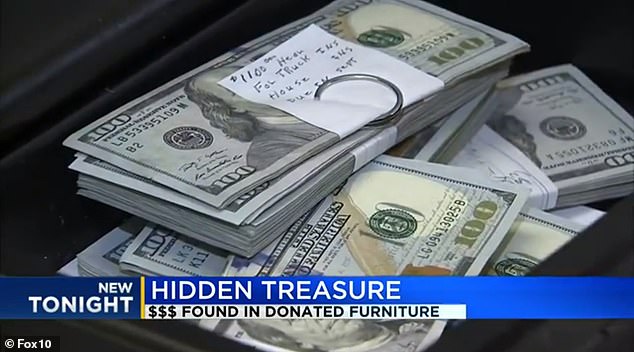 The money was kept neatly in notes, divided with small pieces of paper and annotated by the original owner 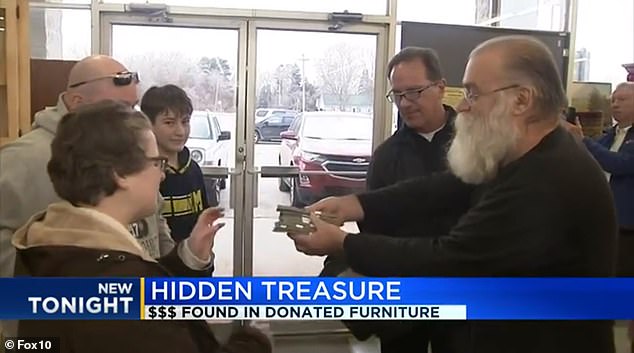 He said he often thought what he would do if he found a large amount of unmarked cash and that now he is pleased to say he has a good conscience.

‘It belonged to them, and I’m glad I was able to give it back to them.

‘I still have to pinch myself to make sure I’m not dreaming or something,’ he said.

The family admitted that they would have burned the couch set if the store hadn’t taken it in. 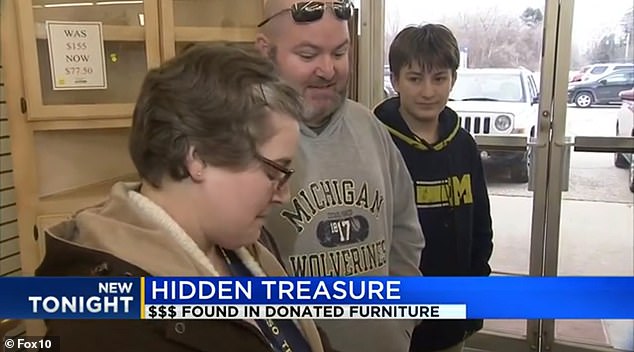 Kim Fauth-Newberry’s grandfather owned the couch originally. She was stunned to receive the money