Michigan officials are preparing for hundreds of anti-lockdown protesters to descend on the capital of Lansing again today as demonstrators are warned they may face arrest if they brandish firearms in an intimidating manner at the event.

Lawmakers will not be in session today and the capitol building will be closed this time, after several armed protesters entered the building during last month’s rally.

Swarms of people began gathering early morning in defiance of the rainy weather, some carrying firearms and waving American flags.

Michigan officials are preparing for anti-lockdown protesters to descend on the capital of Lansing again today demanding an end to lockdown. Pictured the first protesters start arriving 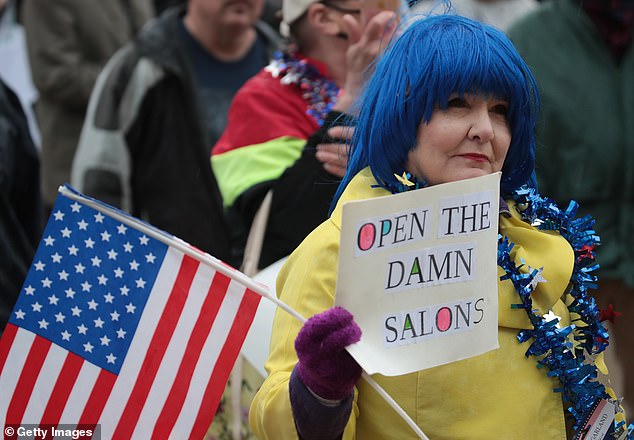 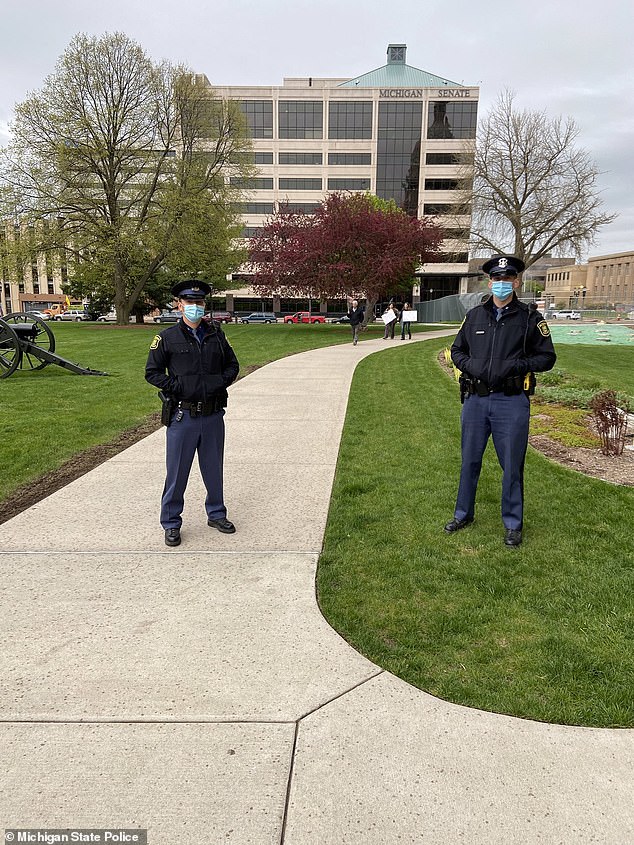 Police presence is expected to be larger than at the last two events. Dubbed ‘Judgement Day’ by organizers Michigan United for Liberty, hundreds of demonstrators are headed for the state capitol building from 9a.m.

A large banner reading ‘Freeedom’ was tied across the statehouse steps as the crowds ignored social distancing rules and huddled under umbrellas below.

One woman with blue hair was pictured carrying an American flag and a sign that read ‘Open the damn salons’.

Whitmer slammed the protesters this week saying their actions could actually lead to an extension of the state lockdown.

‘The fact of the matter is these protests, in a perverse way, make it likelier that we are going to have to stay in a stay-home posture,’ Whitmer told ABC’s ‘The View’ Wednesday.

‘The whole point of them, supposedly, is that they don’t want to be doing that.’

Michigan United for Liberty has insisted the event will be ‘peaceful’ after some lawmakers said they felt threatened during the last protest when demonstrators – some carrying guns – entered the statehouse.

Firearms are permitted both inside the statehouse and at the rally as Michigan is an open carry state.

However law enforcement issued a warning ahead of Thursday’s protest that anyone brandishing a firearm with the intent to create fear could face arrest.

Michigan State Police Col. Joe Gasper and Attorney General Dana Nessel said demonstrators should be safe and respectful and warned that people refusing to obey law enforcement or brandishing a firearm could be subject to criminal prosecution. 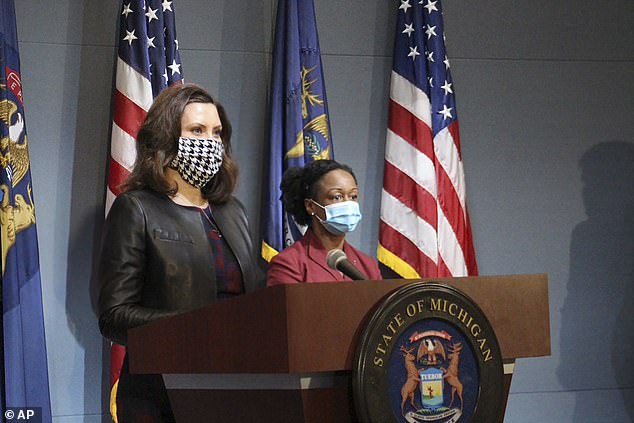 Protesters are demanding an end to Gov. Whitmer’s (pictured) stay-at-home order which has been extended through to at least May 28

‘While our desire is to interfere as little as possible in demonstrations, we will not allow unlawful, threatening or intimidating behavior,’ Gasper said in a statement.

‘Based on safety concerns expressed following previous demonstrations, attendees can expect to see an increased MSP presence on Thursday.’

On Tuesday, Senate Majority Leader Mike Shirkey said that despite a longstanding rule that Michiganders with permits can bring weapons into the capitol, ‘anyone brandishing them in such a way as to intimidate or threaten anyone else should be properly handcuffed, properly taken in and fingerprinted’.

‘Law enforcement needs to take this upon their own hands,’ Shirkey said. ‘When those brandishing activities occur, they need to be addressed and I’m calling on the attorney general and the governor to do so with the cooperation of the Michigan State Police.’

However, the largely Republican legislature stopped short of issuing a blanket ban on bringing firearms inside the statehouse, with the Michigan Capitol Commission deciding to delay a vote on the move on Monday. 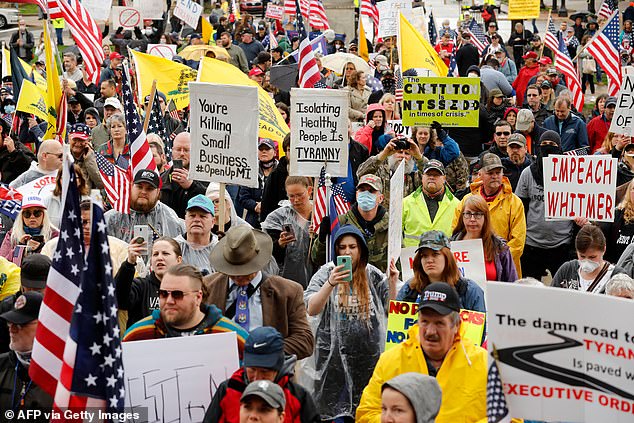 Protesters at last month’s rally on April 30. For Thursday’s protest, demonstrators have been warned they could face arrest if they brandish firearms in an intimidating manner at the event 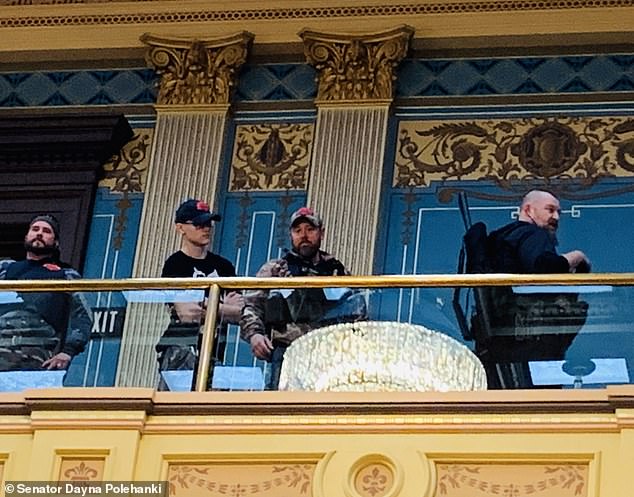 On April 30 several protesters – some carrying guns – entered the capitol building. Firearms are permitted both inside the statehouse and at the rally as Michigan is an open carry state

Democrat Governor Whitmer’s has spoken out in favor of issuing a ban.

‘No one should have to go to work and feel intimidated,’ Whitmer told CNN Wednesday.

‘Making the capitol a gun-free zone is important in making people feel they can do their job safely.’

Police began ramping up patrols of the area Wednesday night ahead of the rally and a larger law enforcement presence is expected compared to previous rallies.

This marks the third time Michigan residents have taken to the streets to protest against Whitmer’s stay-at-home order, which they have branded ‘unconstitutional’. 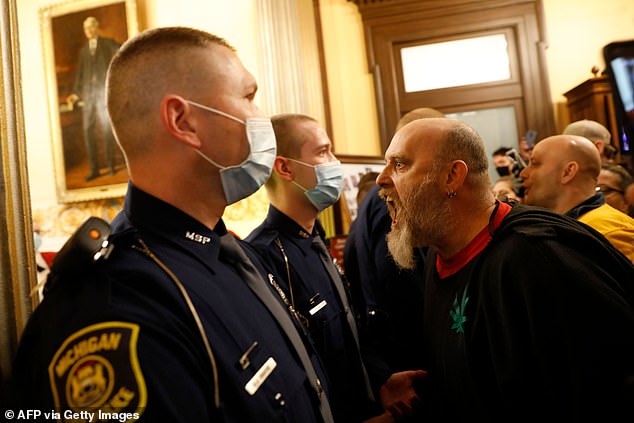 Protesters enter the statehouse on April 30. The largely Republican legislature ruled out a blanket ban on bringing firearms inside the statehouse ahead of Thursday’s protest, against Whitmer’s wishes 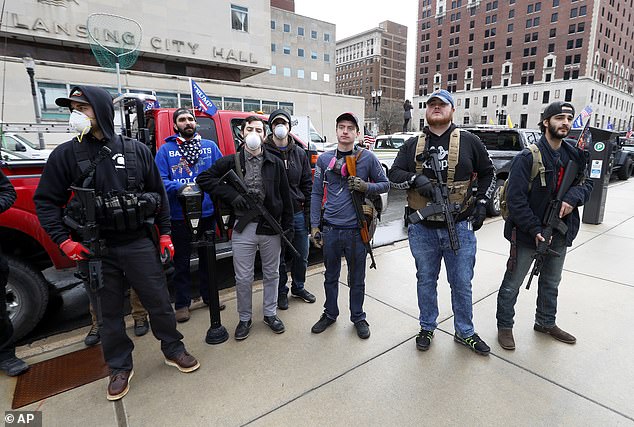 The first protest on April 15. Thursday’s protest will have an increased police presence

Michigan’s stay-at-home order is one of the strictest across the whole of the US and has been extended until at least May 28.

Hundreds of protesters, some armed, gathered at the capitol building on April 30 to protest against the extension last month.

Several protesters spilled inside the building, with some heavily-armed men pictured on the visitor’s balcony in the Senate chambers.

The first protest on April 15 – named ‘Operation Gridlock’ – saw thousands of cars block the streets around the capitol building as demonstrators packed in on the lawn outside.

As of Thursday, it has the fifth highest death toll from COVID-19 among the 50 states with 4,714 residents killed and 48,021 infected by the deadly virus. 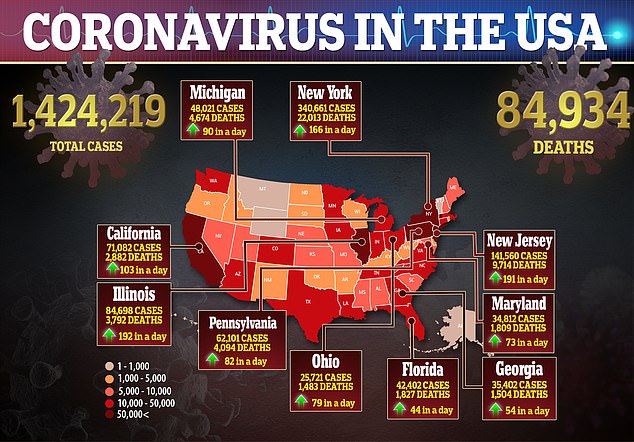