Microplastic pollution found in Antarctica for the first time

Microplastics have been found in the digestive tract of one of the most isolated animals on Earth, a study has revealed.

When scientists visited King George island in Antarctica, almost 100 miles from the tip of South America, they found springtails clinging to the bottom of a piece of polystyrene covered in moss, algae and lichen.

The up-to-two-millimetre-long bugs were collected and taken back to the lab for analysis — which revealed that they contained tiny plastic pollutants.

The results are the first confirmation that microplastics have entered the Antarctic food chain — which springtails form the basis of.

This puts other animals including seals, sharks and penguins at risk.

Previous studies of Antarctic springtails have suggested that they suffer alterations in growth and reproduction due to the ingestion of plastics.

Microplastics have been found in springtails living on polystyrene (left) discovered on a rocky beach on King George island, Antarctica. A collembolans is a type of springtail

The study, published in Biology Letters, analysed 18 springtails found on the foot-square, two-inch-thick sheet of polystyrene, which was picked up in 2016 on a rocky and sloping shore.

An infrared scanner revealed tiny fragments of polystyrene inside their guts, which matched the block that they were living on.

The invertebrates are equipped with powerful jaws for chomping vegetation, which also enabled them to eat through the man-made waste.

‘(This study) shows their ability to ingest plastic,’ first author Elisa Bergami, from the University of Siena, Italy, said.

She said this is a ‘serious concern’ as it shows a ‘potential risk associated with the occurrence of plastic debris in Antarctic terrestrial ecosystems.’

‘It had been unknown whether plastics are able to enter the Antarctic terrestrial food webs,’ she added. 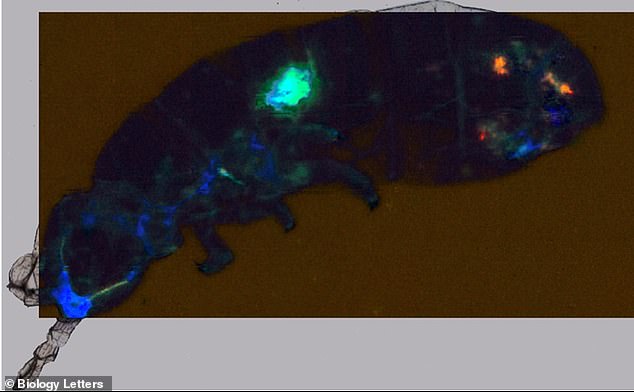 A springtail with microplastics inside it, highlighted. They were identified using an infrared scanner, and came from the polystyrene block where they lived

‘Given the large presence of C. antarcticus in the Antarctic terrestrial environment, the ingestion of microplastics could contribute to their spread along the food chain in the South Pole, with potential risks for the entire ecosystem.

‘Further studies are needed to better understand the possible environmental consequences due to the presence of microplastics, which have already deeply penetrated the soil and food webs.’

The finding comes after small bits of plastic were detected in the Antarctic seas earlier this year.

Scientists at the University of Tasmania said in April they had identified 14 types of plastic smaller than five millimetres from an ice core taken in 2009.

Their presence could mean the regions krill — which feed largely on algae growing on sea ice — may have been exposed to microplastics. 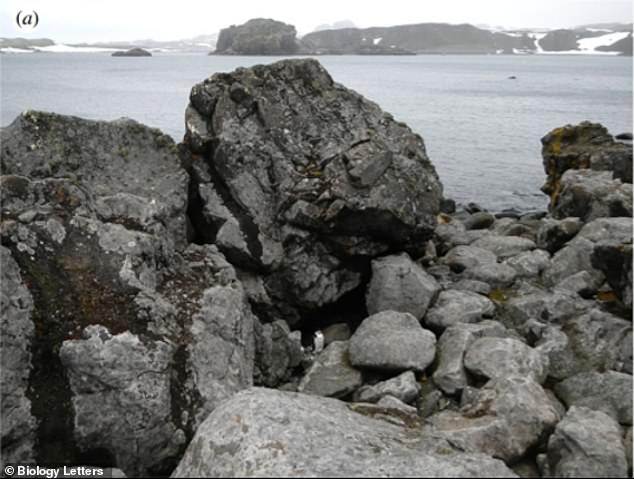 Anna Kelly, from the Institute for Marine and Antarctic Studies at the University of Tasmania and lead study author said: ‘The remoteness of the Southern Ocean has not been enough to protect it from plastic pollution, which is now pervasive across the world’s oceans.’

Springtails are considered to be the foundation of most ecosystems across the world, as they are relied on for food by tiny invertebrates and insects.

In turn, these get eaten by small animals, who then may be consumed by larger animals, allowing the microplastics to move up the food chain.