The microscopic remains of political prisoners executed by the Nazis will be buried in Berlin more than 70 years after the Second World War.

The 300 tissue samples, which are a hundredth of a millimetre thin and around one by one centimetre large, were uncovered by the descendants of the late Hermann Stieve, an anatomist who worked on the bodies of Third Reich opponents.

Professor Andreas Winkelmann, who had been tasked to determine the origin of the samples, said: ‘Such small tissue samples are usually not deemed worthy of burial.

Professor Andreas Winkelmann (pictured standing next to a poster from 1926 detailing the human body as an ‘Industry Palace’, in his office in Neuruppin, Germany, on April 30) has been tasked with finding the origin of 300 microscopic tissue samples from Nazi victims

‘But this is a special story, because they came from people who were actively denied graves so that their relatives would not know where they are buried.’

A ceremony will be held on Monday with descendants of the Nazi victims expected to attend, before the remains are finally laid to rest at the Dorotheenstadt cemetery in central Berlin. 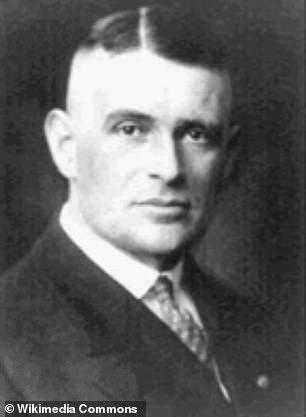 The samples were found by relatives of the late Hermann Stieve (pictured), an anatomist who worked on the bodies of Third Reich opponents

The site had been picked as there are many graves and memorials for the victims of Nazism there, said Johannes Tuchel, director of the German Resistance Memorial Centre, which is organising the special event along with Berlin’s university hospital Charite.

Tuchel said a decision was made to bury the specimens as they are ‘the last remains of people who were victims of the Nazi unjust justice system’.

‘They were denied a grave at that time, and so today, a burial is a matter of course.’

A plaque will also be put up to explain the find.

More than 2,800 people held at Berlin-Ploetzensee prison were put to the guillotine or hanged between 1933 and 1945 – and most were then sent for dissection at the Berlin Institute of Anatomy.

Most of the 300 specimens found in Stieve’s estate stemmed from women, said the plaque, which would not list the names of individual victims at the request of relatives.

Prof Winkelmann, who had done extensive research into Stieve and his controversial experiments, said it was unclear how many individuals’ remains were included in the batch of specimens.

Some 20 specimens came with names, others only numbers. 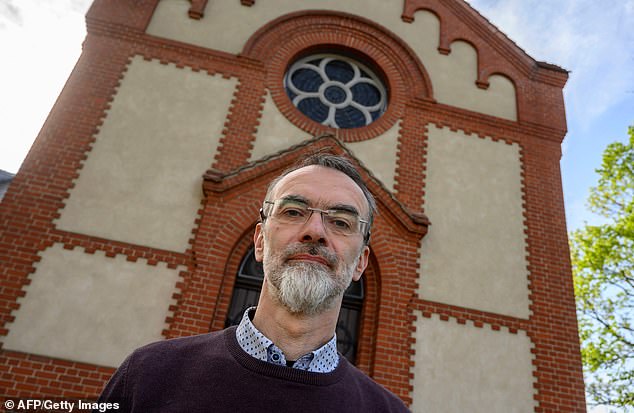 Prof Winkelmann (pictured) said: ‘Such small tissue samples are usually not deemed worthy of burial. But this is a special story, because they came from people who were actively denied graves so that their relatives would not know where they are buried’

The clues have however helped draw a firm link with the Ploetzensee victims.

Crucially for the history books, the specimens each set on two by seven centimetre glass plates provided rare concrete proof that prisoners’ bodies were sent for dissection.

Stieve was the director from 1935 to 1952 of the Berlin Institute of Anatomy, where he carried out his controversial research on the female reproductive system.

Some of his scientific insights derived from histological probes on the genital organs of executed women.

Among those executed at Ploetzensee were 42 resistance fighters from the Berlin group Red Orchestra.

Stieve is believed to have dissected at least 13 of 18 female Red Orchestra fighters executed. 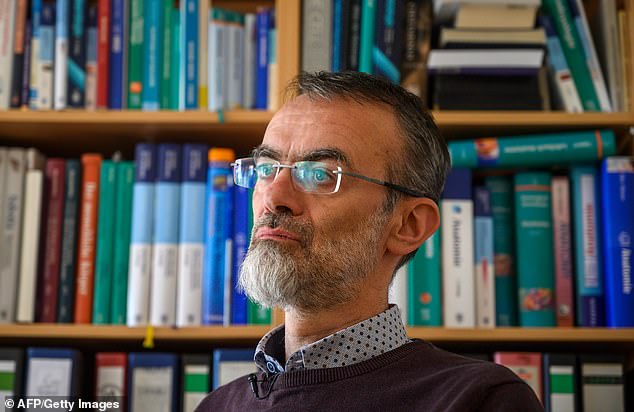 He has done extensive research into the late Hermann Stieve, an anatomist who worked on the bodies of Third Reich opponents. His descendants found the tissues. Prof Winkelmann said it was unclear how many individuals’ remains were included in the batch of specimens. A ceremony will be held on Monday where the remains will finally be laid to rest at the Dorotheenstadt cemetery in central Berlin

He was never charged with a crime and continued his career after the war like many other scientists who collaborated with the Nazis.

Only the highest-ranking physicians under the Third Reich were prosecuted at Nuremberg in the so-called Doctors’ trial for grotesque human experimentation and mass murder under the ‘euthanasia’ programme.

Prof Winkelmann said it was particularly ‘objectionable’ that while Stieve did not directly experiment on live victims, he was examining the physical impact of fear experienced by the women sitting on death row.

‘The Nazi justice system found that interesting for them, not because they wanted to back Stieve’s research, but because it was a way to humiliate the victims once again,’ Prof Winkelmann said.

‘First, by sending them to anatomy – something that not everyone wants… and it was also a way to deny the victims a grave.’

Adolf Hitler’s regime sought to dump the remains in unmarked mass graves because it did not want sites where relatives could mourn the victims, and from where political demonstrations could ensue.

While Monday’s burial may finally provide a form of closure to relatives of victims, Prof Winkelmann said ‘there are still open questions that haven’t been answered about Hermann Stieve and how he went about his research’.

‘I don’t want to close this chapter, because the future generations need to be informed about what happened there and why we think it was wrong. All that is relevant for the future.’