A survey of staff which asked them for their opinions on the merger – worth a reported $50billion – found 63 per cent were opposed with just 18 per cent in favour.

Microsoft entered the running to buy TikTok earlier this month after Donald Trump threatened to ban the app unless it cut ties with its China-based owners.

The deal, which would have to be concluded by September 15, could be worth up to $50billion – which Trump has suggested the government should get a cut of.

Microsoft staff are opposed to the company buying Chinese social media giant TikTok, leaked messages have revealed, with 63 per cent voting against it in a survey (file)

Bill Gates, who co-founded Microsoft in 1975 and quit the board this year, has already described the deal as a ‘poisoned chalice’ – and it seems staff agree with him.

Posting on an internal company social network called Yammer, staff said it feels like ‘we’re not doing the right thing’ by entering into the negotiations.

In a survey on Yammer, seen by Business Insider, 63 per cent of staff said ‘no’ when asked whether Microsoft should buy TikTok.

In a comment thread about the deal, one user wrote: ‘Especially since Satya [Nadella] became CEO, I’ve felt nothing but pride to be part of this company.

‘This is the first time in a long time that I’ve had doubt gnawing at the pit of my stomach that maybe we’re not doing the right thing.’

Another added: ‘This deal is unethical from pretty much any perspective. That Microsoft would even be considering stepping into this situation is unthinkable.’

Last week, Trump moved to ban TikTok’s owners ByteDance from operating in the US on national security grounds, over fears that data collected by the app is being sent back to Beijing.

But a last-minute intervention by Microsoft CEO Satya Nadella convinced the president to offer TikTok a lifeline: It can continue to operate provided ByteDance sells it to an American company.

‘A very substantial portion of that price is going to have to come into the Treasury of the United States, because we’re making [the deal] possible,’ Trump added.

Those comments raised eyebrows across the business world, and was likened to a Mafia-style shakedown by some.

Mark Almond, a lecturer in modern history at the University of Oxford, said Trump appeared to be asking for ‘pizzo’ – an Italian mob term for protection money. 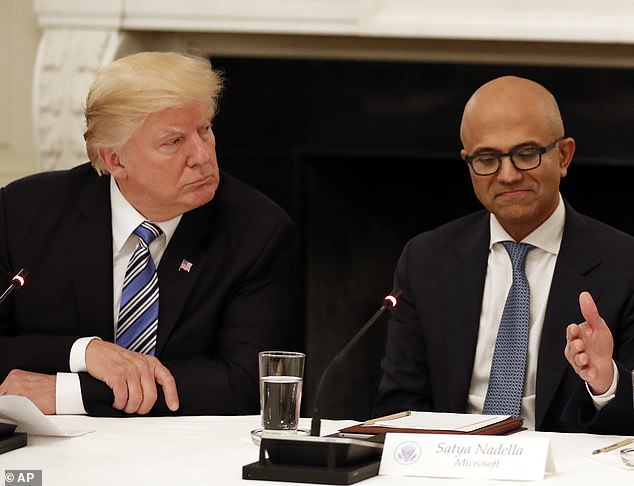 Microsoft entered the running to buy TikTok after CEO Satya Nadella spoke to President Trump (pictured together in 2017) and persuaded him not to ban the app, if a US firm took it over

‘This may be intended as a signal to Beijing, but it may also send a message to others who are at the moment not remotely hostile towards the United States,’ he said.

‘It gives his enemies, and his enemies in the US, grounds to say that it looks like a Mafia shakedown.’

The deal appeals to Microsoft because it would allow the computer manufacturer to increase its presence in the social media space, competing with the likes of Facebook and Google.

The only social network currently owned by Microsoft is LinkedIn – its previous largest purchase, which it paid $26billion for in 2016.

Neither Facebook or Google can enter the running for TikTok, because of anti-trust issues they are facing.

Some experts have suggested TikTok could be worth up to $200billion in a few years, provided the right opportunities to grow.

But wading into the social media space would mean Microsoft contending with issues such as content moderation and free speech, which have piled pressure on the likes of Facebook and Twitter in recent weeks.

As the app grows, it could also expose Microsoft to antitrust investigations that saw Mark Zuckerberg, Jeff Bezos, Sundar Pichai and Tim Cook brought to testify in front of Congress two weeks ago.