Microsoft’s paperclip mascot Clippy is coming back as an emoji

Microsoft’s much-hated paperclip mascot Clippy, which frustrated users with his unwarranted advice, is coming back as an emoji.

Clippy, a friendly anthropomorphic paper clip, was introduced as a ‘virtual office assistant’ in Microsoft Office back in 1997.

The digital mascot was designed to help Microsoft Office users carry out a number of tasks by offering advice and tutorials.

But it became loathed by many as a distraction and an annoyance for frequently popping up on screens unprompted and the firm killed him off in 2007.

Now, Microsoft is bringing him back – but not in his previous capacity as an over-eager helper.

Microsoft has tweaked designs for its more than 1,800 emojis on Office, by making them more ‘fluent’ and three-dimensional. This includes replacing its current long, flat paperclip emoji in its suite of Office software with Clippy. 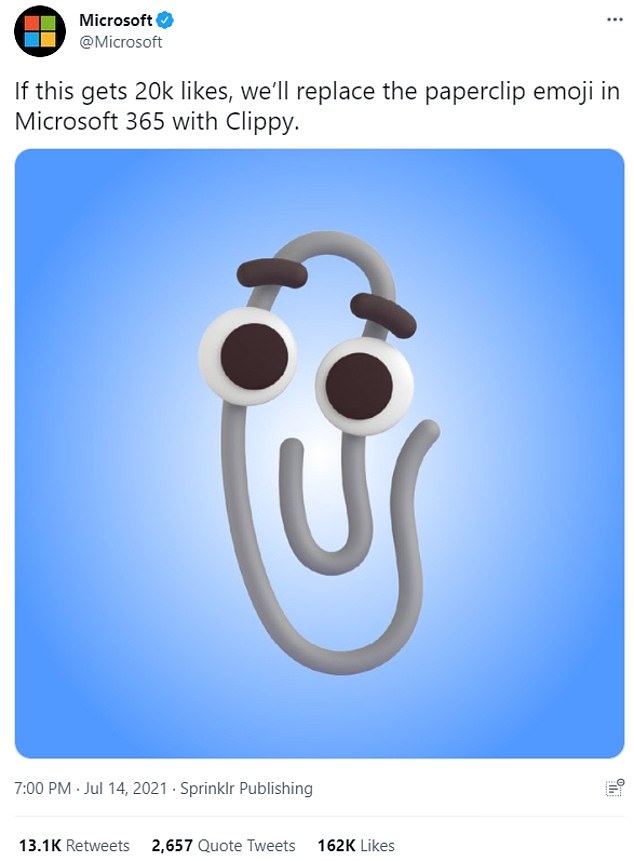 Microsoft is promising – or threatening, depending on how you look at it – to bring back Clippy as an emoji

In 1997, Microsoft introduced its virtual assistant, Clippy,  to users of Microsoft Office.

The anthropomorphic paper clip would appear on-screen to help users carry out a number of tasks and provide advice.

Eventually, after coming to be loathed by many, Clippy suffered its ultimate blow and was killed off by Microsoft entirely in 2007.

The legacy of Clippy, however, has endured in memes, parodies, and most recently, a deleted sticker pack in Microsoft Teams.

Microsoft tweeted an updated emoji-fied photo of Clippy on Thursday with the words: ‘If this gets 20k likes, we’ll replace the paperclip emoji in Microsoft 365 with Clippy.’

As of Friday morning, the tweet has nearly 163,000 likes, so the firm will have to keep its promise.

Once the like count surpassed 20,000, one Twitter user replied to the company, ‘Microsoft, you playin?’ Microsoft tweeted back coyly: ‘Wait and find out’.

But Claire Anderson, art director and ’emojiologist’ at Microsoft, has already confirmed his comeback in on the Microsoft Design blog post, which she used as an opportunity preview updated designs of some of its more than 1,800 emoji in total.

These refreshed designs from Microsoft, which better support ‘the new landscape of work’, will roll out in ‘over the coming months’, Anderson said in the blog post.

‘We opted for 3D designs over 2D and chose to animate the majority of our emoji.

‘We had to use this opportunity to make a change that only we could truly make – so long flat, standard paperclip, and hello Clippy! 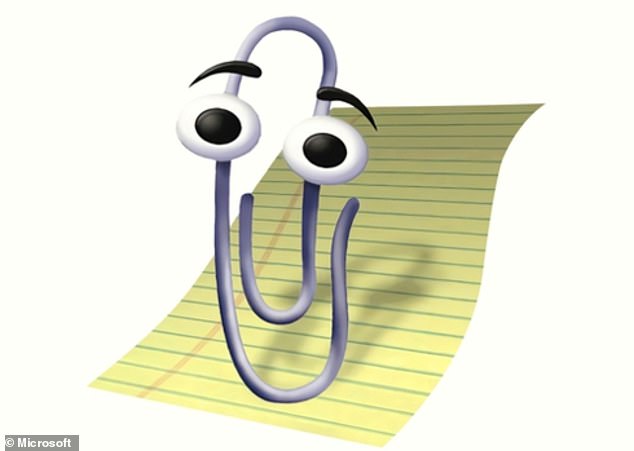 Pictured, the original Clippy. Eventually, after coming to be loathed by many, Clippy suffered its ultimate blow and was killed off by Microsoft entirely in 2007

‘Sure, we may use fewer paper clips today than we did in Clippy’s heyday, but we couldn’t resist the nostalgic pull.’

Clippy has already made a very brief comeback fairly recently – in 2019, he made an appearance in a sticker pack for Microsoft’s unified communications platform, Teams, and then later in the company’s official Github page for Office developer.

But just as easily as Microsoft brought the virtual personality back, the company’s ‘brand police’ – its marketing department – took him away almost immediately.

According to Adobe’s 2021 Global Emoji Trend Report, which also coincides with World Emoji Day, the most popular emoji worldwide is Face with Tears of Joy.

Face with Tears of Joy is the favourite emoji of global emoji users around the world, according to Adobe’s 2021 Global Emoji Trend Report

Rounding out the top five global emoji are Thumbs Up, Love Heart, Face Blowing a Kiss and Crying Face.

For the report, Adobe surveyed 7,000 people in the US, the UK, Germany, France, Japan, Australia, and South Korea.

It also found 55 per cent of global emoji users are more comfortable expressing emotions through emojis than phone conversations.