As a Treasury Minister in the mid-1980s, John Moore helped to oversee the biggest privatisation the world had ever seen – the flotation of BT in 1984.

The transaction was a rip-roaring success, raising nearly £4billion for the Government and turning millions of people into stock market investors for the very first time.

Not everyone in the City was convinced this was a good idea. As one broker reportedly said to Moore (who died in 2019): ‘But John, we don’t want all those kinds of people owning shares, do we?’

Promise: BT’s flotation on December 4, 1984, was hailed by brokers at the London Stock Exchange but for two decades it has disappointed investors

Regular dividend payments, amounting to about £5.50 a share since the company floated, have provided investors with some comfort. But there is no escaping the fact that BT’s share price performance has been execrable.

Even the dividend gravy train dried up last year, when chief executive Philip Jansen suspended the final payment for 2020 and said no money would be coming investors’ way for the year to March 2021 either.

Recent figures for that year explain why Jansen chose to be so tight-fisted.

Turnover fell 7 per cent to £21billion, profits dived 23 per cent to £1.8billion and the group is forking out billions of pounds upgrading its fibre cable network so that 25million households – equivalent to 80 per cent of the country – will have access to ultrafast broadband by 2026.

BT also owns EE and Plusnet, and more money will be spent upgrading mobile networks to 5G over the coming years so super-speed online services are available not just at home but when people are out and about.

Jansen hopes that investing more than £15billion in better infrastructure will prove to be money well spent, bolstering BT’s reputation with the Government, regulators and, of course, customers.

Fibre optics and 5G networks are not everything, however. For years, BT has been associated with doddery connections, inexplicable bills and frustratingly poor service by call centre staff.

People who are supposed to help customers on the phone can be surly, inefficient or both. Engineers tend to follow suit.

Jansen wants to do better. He envisages a BT that offers top-grade internet access at all times, a company where staff treat customers with respect and solve their problems, and a firm whose bills are easy to read and make sense.

Anyone who has dealt with BT recently knows the company is not there yet and senior staff freely admit that there is still work to be done.

Nonetheless, Jansen is optimistic – so much so that he spent £2million of his own money buying 1.25million BT shares at £1.63 each last week.

Jansen is a wealthy man. At the helm of Worldpay for six years he amassed a personal fortune of more than £100million from the flotation and sale of the payments group before joining BT in January 2019. The 54-year-old father of five was buying stock before then and has now spent more than £10million of his own money on BT shares.

Most of those purchases were made when the price was higher than it is today. Even so, last week’s spending spree made big investors take notice. The stock rose 10p between Monday and Friday, dealing Jansen a tidy paper profit of £125,000 in days. 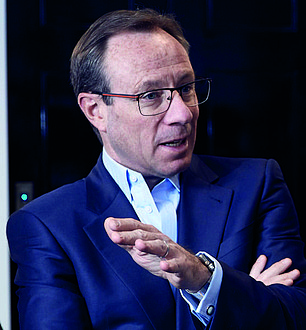 Individual shareholders have benefited, too, but that cannot make up for the repeated disappointments of the past two decades. So what should they do now?

Jansen clearly believes the future is bright. His show of faith in BT was not just manifest in the decision to up his own shareholding, but also in a distinctly upbeat assessment of group prospects, when figures to March 31, 2021 were announced ten days ago.

While the results were lacklustre, the statement from Jansen was anything but.

‘After a number of years of tough work, and as we look to build back better from the pandemic, we’re now pivoting to consistent and predictable growth,’ he said.

Turnover is likely to be flat in the current year, but profits should increase and dividend payments will resume, with a 7.7p payout scheduled for the 12 months to March 2022, rising steadily thereafter.

Looking beyond the next five years, those payments may increase substantially. By that time, investment in fibre cables and 5G will have been largely completed and BT should be reaping the rewards of its labours.

The group’s cable-laying business, Openreach, counts companies such as TalkTalk, 3 and O2 as customers. They all rent space on the fibre network so they can offer broadband to their own customers.

The more cables there are – and the faster the connectivity they offer – the more Openreach can charge and the more money BT will make.

BT’s own customers are likely to face higher bills, too. Ultrafast broadband and 5G networks may allow consumers and businesses to access the internet more quickly than ever before but there is a price to be paid, which ultimately should feed into increased turnover for the business.

Profits should also benefit as Jansen attempts to make this juggernaut of a business more efficient.

The company operates from more than 300 locations, some of which have just a handful of people in them. That perhaps helps to explain why so many customers feel they are pushed from pillar to post whenever they have a problem and that no single member of staff has the least idea what any of their colleagues are doing.

Encouragingly, Jansen recognises that this is an issue and is keen to reduce the 300-plus locations to 30, even as more flexible working practices are introduced.

Inevitably, unions are not happy and discussions are ongoing, but the status quo is clearly well past its sell-by date so changes need to be made.

At a corporate level, there is a chance that BT Sport could be sold, either outright or in part. An expensive service, it has consistently failed to deliver the benefits that Jansen’s predecessor Gavin Patterson expected, and a disposal could prove timely.

There is even talk of finding a partner to help fund some of the fibre network costs, a move that would allay BT’s financial burdens in the next few years.

Jansen is parting ways with chairman Jan du Plessis, too. Amid talk of tension and turmoil, robustly denied, Du Plessis announced his departure in March and a search is under way for a successor.

What this means for the business and its shareholders remains unclear but it appears that Jansen is firmly in the driving seat and likely to remain so.

Midas verdict: BT has more than 800,000 individual shareholders, most of whom, including me, have been there from the start.

‘Those kinds of people’ have been poorly served by the business, with the shares making precious little headway for years. But now is not the time to sell.

Jansen is making progress, albeit slowly, and his decision to shell out £2million of his money on stock suggests he believes the price should rise. I am inclined to believe him.