Almost 600,000 middle earners will be lifted out of the 40p rate of income tax, the Chancellor announced yesterday.

From April next year, workers will only pay higher-rate tax when their incomes reached £45,000, up from the current £42,385 threshold today.

The move will hand an average £400 tax cut to hundreds of thousands of families, and George Osborne described the move as the biggest giveaway to higher-rate taxpayers since the 40p rate was introduced nearly 30 years ago.

‘It is going to lift over half a million people who should never have been paying the higher rate out of that higher tax band altogether,’ Mr Osborne said.

Just over 1.6million workers have been dragged into the 40p tax band since 2010, including teachers, nurses and train drivers. The total number paying higher-rate tax, which was originally supposed to be only for the wealthy, has hit 4.6million.

They have been dragged into the band because the Government has failed to increase the higher-rate threshold in line with rising wages.

The Government had already announced that the 40p threshold would rise to £43,000 next month. Experts said the faster jump to £45,000 showed the Chancellor was committed to his goal of increasing the 40p threshold to £50,000 by 2020.

Teachers Olivia and Chris described the rise in the higher rate tax threshold as ‘reassuring’.

The couple, both 39, who live in a £300,000 four-bedroom home in Hampshire with their son, both teach music full-time at independent boarding schools.

They currently sit just below the 40p tax rate threshold, with Olivia earning £40,000 and her husband earning just over that figure.

She welcomed the Chancellor’s announcement, which should protect her and her husband from moving into the higher tax band over the next few years.

She said: ‘The rise means that when I have an inflationary rise in my salary it’s going to take me a very long time to get to that threshold. So I should just stay under, which is good news.’

The couple currently spend £14,000 a year on school fees for their son, who is a chorister.

He is due to move home from boarding school next year, so the couple have just submitted plans for a £25,000 first floor extension, which would give him a bigger bedroom.

Olivia said she thought it was important the higher rate tax threshold stays in line with inflation. She said: ‘They had to do something to increase it.

‘CPI [consumer prices index], RPI [retail prices index], and inflation have gone up, so if the tax [threshold] didn’t go up then a lot of middle earners like teachers, policemen and other civil servants would be really feeling the pinch. So it’s reassuring.’

The new threshold will slash the number of higher rate taxpayers by 585,000. It will cost the Government £2.1billion by 2021, according to Treasury figures.

Iain McCluskey, of PWC, said: ‘This will be a welcome tax cut for many taxpayers. The 40p band has failed to rise in line with inflation for many years, dragging many more taxpayers into the higher rate. The Chancellor has made good progress in this budget as he drives towards a £50,000 limit by 2020.’

Harry Fairhead, of the TaxPayers’ Alliance, said: ‘People on middle incomes will be relieved at the rise in the higher income tax rate threshold as it leaves more money in their pockets and not in the hands of the often wasteful public sector.

‘There is clearly further to go as so many more people pay the higher rate now than in 2010.’ The 40p rate was introduced by the then chancellor Nigel Lawson in 1988 when he cut the top rate of tax from 60p. When the rate was introduced it was supposed to hit only high earners.

At the time only one in 15 were caught by the 40p rate. Now that figure is almost one in six – many on modest incomes. Approximately one in ten nurses is trapped in the higher rate band.

But David Finch, of the Resolution Foundation, said: ‘These income tax cuts will largely benefit higher income households. That is hard to justify at a time major fiscal pressure.’

Frances O’Grady, TUC general secretary, said: ‘Most working families earn too little to benefit from this. They will wonder why the Government can spare so much for a tax handout to higher earners when they are losing children’s centres and facing longer hospital queues.’

1.3 million will pay no tax at all

Around 1.3 million of the lowest paid will escape paying income tax altogether, after the Chancellor announced a further increase in the tax-free personal allowance.

From April next year, workers will be able to earn £11,500 before they start to pay tax, up from £10,600 currently. The move will also benefit pensioners on modest incomes.

George Osborne said in his autumn statement last November that the allowance would reach £11,200 by 2017, but yesterday he increased the speed of the rise. 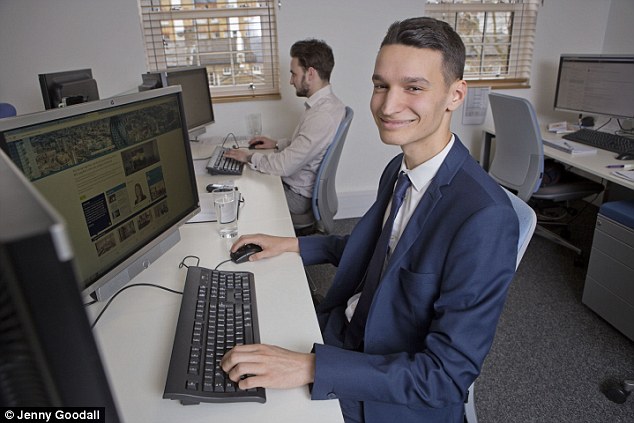 Josiah Norman earns between £8,500 and £12,500 working with a marketing firm in Chiswick, West London

The Government has committed to raising the personal allowance to £12,500 by the end of this Parliament in 2020.

Mr Osborne said that the new limit would take 1.3 million people out of income tax and provide a tax cut of £1,000 on average for 31 million workers.

One of those likely to benefit welcomed the change: Josiah Norman earns between £8,500 and £12,500 as a marketing apprentice at a serviced apartment agency firm in Chiswick, West London, depending on performance and attendance bonuses.

Although he potentially could be liable for the standard rate of tax, his income may well fall under the new limit of £11,500.

Josiah said each penny counts at his level of earnings: ‘I wasn’t sure what to expect from the Budget, but I think it’s been remarkably positive for me. On my salary, every little bit of money goes a long way, so it means a lot that the Government are tailoring the change for lower earners.’

He lives with his parents and sister in Brixton, spending £70 a month on rent and £83 a week travelling on the Tube to work – and tries to save £200 or more a month.

The 18-year-old opted for an apprenticeship rather than going to university, for financial reasons, and said: ‘I’m very strict with my money. I know exactly what I’m spending. The fact that the Government are supporting people like me is really good.’

Robin Williamson, technical director at the Low Incomes Tax Reform Group charity, said of the allowance increase: ‘This is good news if you’re earning a bit more than £11,000.’