Migrant teens are dragged unconscious from under truck

Two migrant teenagers were discovered hiding underneath a British removal man’s truck as he arrived back in the UK from Spain.

Wayne Francis, 47, who lives in Poole, parked up in the French port of Caen last Tuesday afternoon to wait for the ferry home on the last leg of a 2,600-mile round trip to Marbella.

He was in the northern port city for around two hours and, after leaving his truck, returned to find a coat by the side of his vehicle.

He thought nothing of it and boarded the ferry to Portsmouth.

But as he departed Portsmouth following the six-hour journey, he was flagged down by port staff who spotted an arm dangling from under his van.

Wayne Francis was stunned to find two migrants hidden under his truck at Portsmouth (pictured one is given a blanket, while officers spent 15 minutes pulling the other teenager out 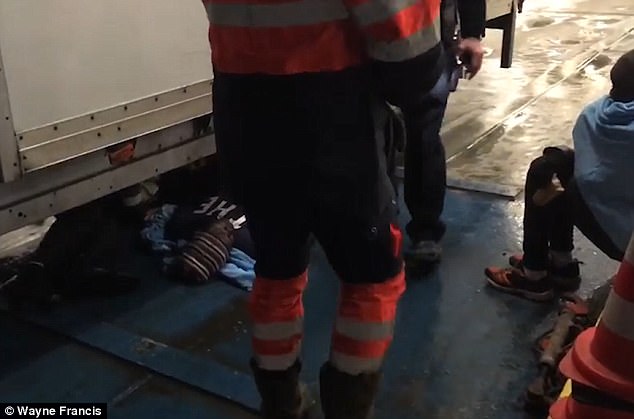 As one stowaway was given a blanket, the other man was pulled unconscious from under the truck in Portsmouth 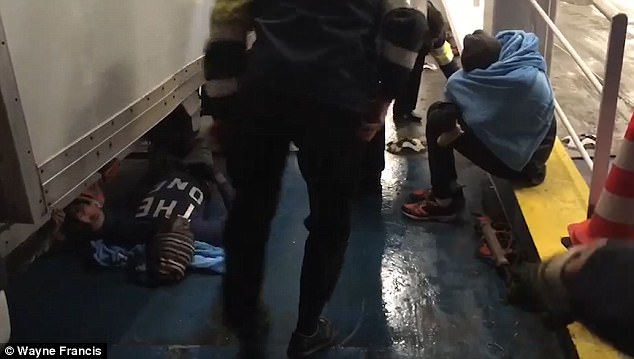 Mr Francis, a removal man, was shocked to find the two migrants had been hiding under his truck as he returned from Marbella

Speaking to MailOnline Mr Francis said: ‘I’m a removal guy and on my return journey I went back through France and got a ferry from Caen to Portsmouth on Tuesday afternoon.

‘I parked up for a couple of hours in Caen and went to get a bite to eat.

‘When I came back I could see a coat by the side of the vehicle…I went through it and checked the pockets and then threw it back in the bush and drove to the ferry port, where I queued up.

‘In the queue in front of me someone got stopped as a migrant had hidden in their headboard. I had my truck checked but nothing was found.’ 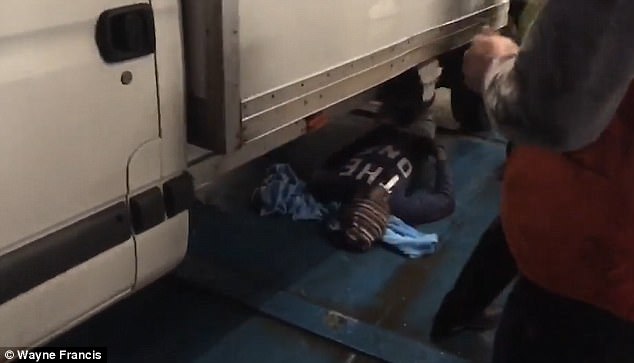 Mr Francis described the older migrant, who was around 17, as being ‘lifeless…totally not there’

Mr Francis explained how he was on the ferry for six hours and it was delayed by 30 minutes because it was a terrible crossing.

However when he returned to Portsmouth, just after 10pm, he was shocked to see a worker waving frantically at him and urging him to stop.

He said: ‘I pulled to one side and checked under the van. I saw there was a pair of trainers there…there were two migrants underneath my van.

‘One guy got out, the younger lad who looked around 15, and then I saw another guy who was unconscious.

‘He was lifeless…he was totally not there. It was very frightening and all sorts of things were going round in my head. 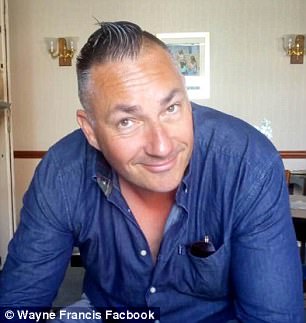 Wayne Francis, 47, was stunned to find two migrants hidden under his truck after a 2,600-mile round trip from Spain

‘He would have died if he hadn’t been spotted or until I smelt decaying flesh coming from my vehicle.

‘The two lads must have been under my vehicle for about 10 hours, with a wind chill factor of about -15 degrees. The one who was unconscious, he was around 17, he was lucky he was found.

‘His arm had been dragging on the floor because he had passed out.

‘The younger one came out and sat on the side and had a blanket wrapped round him, while the other one was put on a stretcher and tended to by paramedics.’

Mr Francis, who is originally from Nuneaton, said he was given a ‘firm talking to’ by customs and excise officers.

He said: ‘I had mixed feelings…I was angry the migrants had picked my vehicle and I had already driven for a day and a half. It was freezing cold and it was the last thing I needed.’

The removal man admitted it was ‘my vehicle and so my prerogative’ but said the stowaways were hidden in half-a-foot gap in the chassis of his vehicle.

He said: ‘It was a very tight fit and it took the officers around 15 minutes to get the guy out and they had to do it limb by limb. He looked dead…but he was breathing.’

The 47-year-old added: ‘They were definitely migrants trying to get in. I go to the continent on a monthly basis but this is the first time this has happened to me.

‘It goes to show how desperate people they are to get in…they are putting their lives in danger…it’s crazy.

‘I left my details with the authorities…it then took me another two hours to get home in the freezing cold.’