Migrants are stuck waiting in hours-long lines in freezing cold temperatures to be processed by Border Patrol after illegally crossing from Mexico into El Paso, Texas.

A DailyMail.com exclusive tour of the U.S.-side of the border Wednesday shows migrants – including women and children – bundled up in blankets as temperatures are set to reach a low of 24 degrees this week.

Migration has not slowed at the El Paso crossing as thousands continue to filter in from Ciudad Juárez, Mexico over the last week with just days left until the end of pandemic-era expulsion policy Title 42.

Newly erected fencing is forcing migrants to queue along the U.S.-side of the Rio Grande River bank to await transportation to overwhelmed processing facilities in El Paso. Many migrants started bonfires along the river bank to keep warm while camping out on the ground overnight or waiting for their turn to be processed.

At least 500 who made it through processing were released into the Texas city and hundreds are taking shelter on the streets with nowhere else to go. Some are using cardboard boxes as mattresses.

Migrants lining up along the U.S. side of the southern border in El Paso on Wednesday, December 14 bundle up as they wait in freezing cold temperatures to be processed by Border Patrol 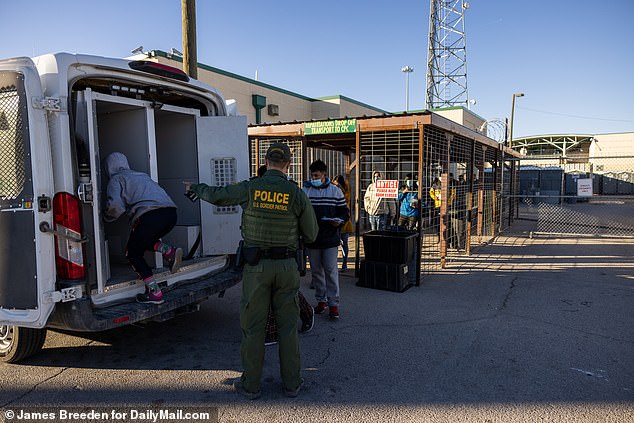 DailyMail.com got an exclusive tour of the U.S. side of the border in El Paso on Wednesday. Pictured: A Border Patrol agent direct migrants into a vehicle to be processed after crossing illegally 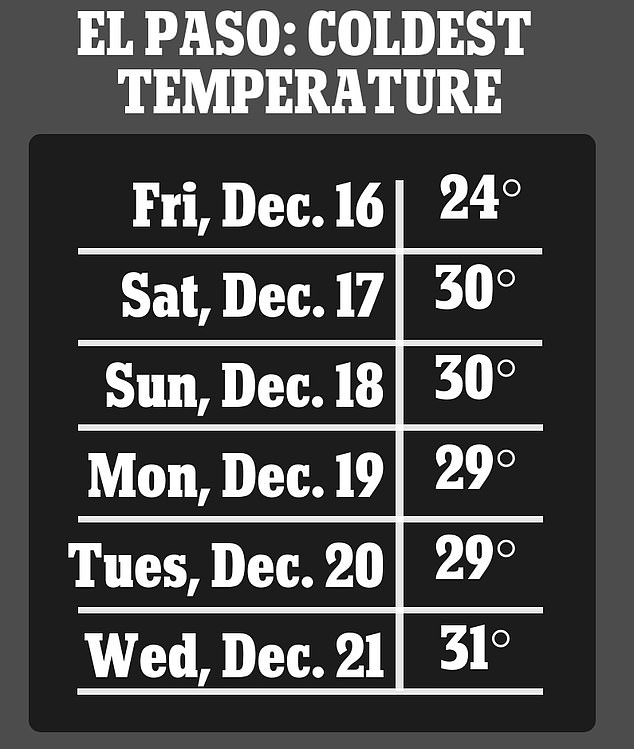 Temperatures in El Paso are expected to dip to 24 degrees this week as thousands of migrants wait to be processed ahead of the end of Title 42 on Wednesday, December 21

‘Good samaritans’ are handing out blankets, scarfs, gloves and shoes to migrants trying to keep warm, according to a Fox News reporter on the ground in El Paso.

Donald Trump weighed in on the prevailing crisis on Truth Social Thursday morning, writing: ‘The thousands of people illegally coming into our Country on a daily basis is a DISASTER and, considering how many of them there are, and what they’re bringing with them, not so much different than a military invasion.’

‘Two years ago we had the safest Border in U.S. history, now we have, by far, the WORST!’ he added. Trump ran on the platform of securing U.S. borders from illegal immigration and building a wall along the entire southern border.

When Trump left office and President Joe Biden took over, the number of illegal crossings surged and has failed to slow. Biden stripped several of Trump-era border policies on Day One of his presidency.

In Fiscal Year 2022, which ended in September, Customs and Border Protection (CBP) encountered a record-breaking high of nearly 2.4 million migrants along the southern border. The new year starting in October kicked off poorly with the third-highest month of encounters in U.S. history. 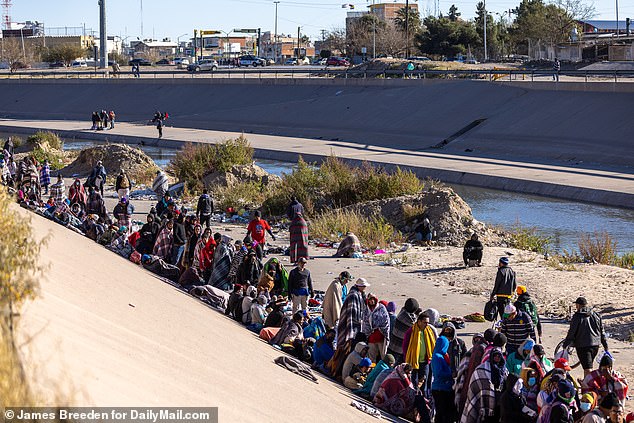 Hundreds of migrants queue in lengthy lines on the U.S. side of the Rio Grand River as they wait to be processed 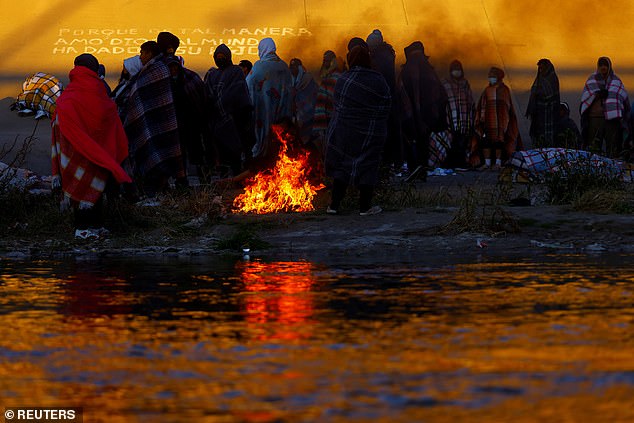 As the sun goes down and temperatures drop below freezing, migrants set small fires along the river bank to keep warm 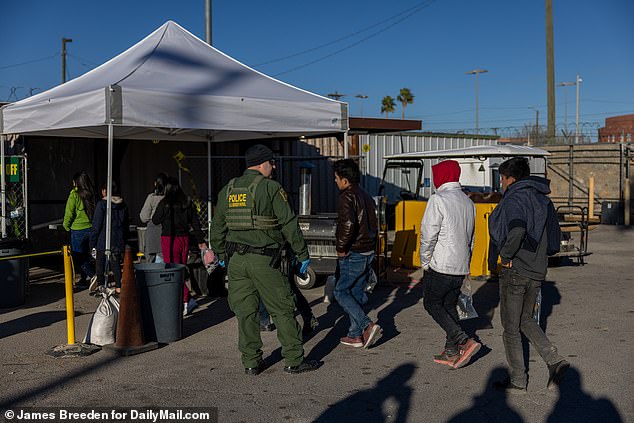 El Paso Border Patrol facilities are only able to hold approximately 1,500 migrants at a time, National Border Patrol Council President Brandon Judd told DailyMail.com – and with more than 5,000 migrants crossing in just a few days, NGOs and other shelters in the area are also too overwhelmed to take in every person who needs a bed and a warm place to stay.

Between Sunday and Monday in the El Paso sector alone, the average number of asylum-seekers crossing the border reached a daily average of 2,460, according to Border Patrol’s El Paso Sector Chief Peter Jaquez. A dashboard maintained by the city of El Paso showed as of Sunday that more than 5,100 migrants were held in the Border Patrol Central Processing Center in the Texan city.

Immigration officials released 1,744 migrants in El Paso on Saturday and Sunday. Of those released, 611 were left on the streets in Downtown El Paso after shelters run by NGOs in the area also ran out of bed space and became overcrowded.

Agents are facing warnings that the number of crossings will only get worse ahead of Christmas.

The end of Title 42, a COVID-19 health-related expulsion policy, could lead to a massive surge in migration at the entire southern border – with one report predicting the daily figures could reach 14,000 crossings.

Title 42 was enacted under former President Trump and allowed for the instant expulsion of asylum-seeking migrants who illegally crossed the southern border during the public health emergency.

Republicans and other critics claim that President Joe Biden and Homeland Security Secretary Alejandro Mayorkas do not have an alternate plan in place to quell migration once Title 42 is no longer in play.

The Biden administration, however, claims that nothing will change at the border once the policy ends next Wednesday – just four days before Christmas. 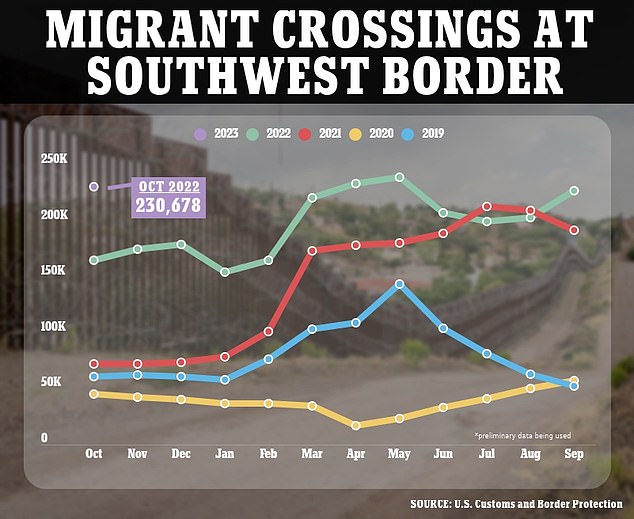 The first month of Fiscal Year 2023 showed more than 230,000 encounters with CBP, the third-highest month in recent history, all occurring under President Joe Biden