Mika Brzezinski is revealing the moment that she and husband Joe Scaraborough  made the decision to end their relationship with former friend and current president Donald Trump.

The Morning Joe host said in an interview with human rights activist Zainab Salbi on her show Through Her Eyes that it all came to an end after she spoke with President Trump privately about his use of what she perceived to be racist comments and language.

She claims that after she spoke to President Trump about his rhetoric he responded that those remarks ‘work’ for him, at which point Brzezinski said her and Scarborough decided they ‘can’t support this.’

Turning tables: Mika Brzezinski was interviewed about her relationship with President Trump by human rights activist Zainab Salbi on her show Through Her Eyes (above) 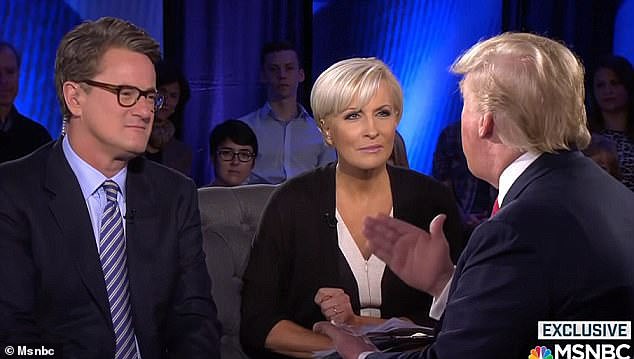 Former friends: She recalled the time she spoke to President Trump privately about his use of what she perceived to be racist comments and language (Brzezinski, Scarborough and Trump in 2016)

‘A lot of people misunderstood the relationship. We were very critical of Donald Trump during the campaign,’ said Brzezinski.

‘When he said racist things, we called him out on it. We even went and assailed him in private and said, “You’ve got to stop this. It’s disgusting. It’s wrong, and it’s not what we know.”‘

President Trump balked at the idea according to Brzezinski.

In that same interview, Brzezinski also speaks about the changes she has been forced to make in her life since speaking out against President Trump.

‘There have been times where he sent the National Enquirer after us,’ claimed Brzezinski.

‘Calling my daughters, calling people who have worked for me over the years, personal friends.’

She later noted: ‘It’s gotten scary. And we’ve made changes in our life to deal with the fact that it has gotten scary’

The feud between the Morning Joe hosts and President Trump became very public back in June 2017 when the later tweeted: I heard poorly rated @Morning_Joe speaks badly of me (don’t watch anymore). Then how come low I.Q. Crazy Mika, along with Psycho Joe, came to Mar-a-Lago 3 nights in a row around New Year’s Eve, and insisted on joining me.’

He then added: ‘She was bleeding badly from a face-lift. I said no!’

The pair recounted how shortly after those tweets were posted, President Trump called them up ‘screaming’ about Scarborough’s treatment of Stephen Miller on their program.

‘He said, “I invited you over to lunch and you’re so rude! You’re killing this kid!”‘ said Scarborough, referencing a lunch at Mar-a-Lago.

He went on to claim that President Trump told him he should have invited Sean Hannity to the lunch. 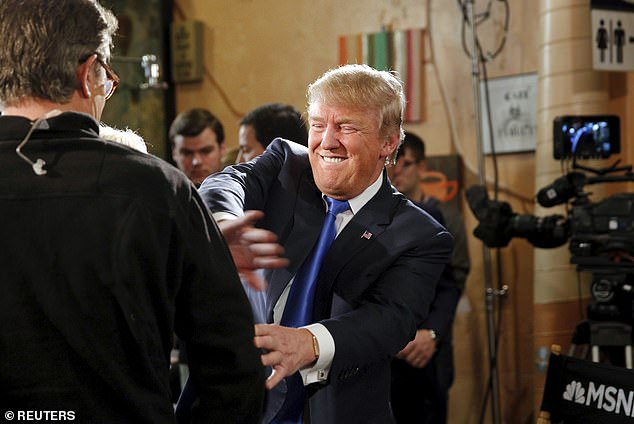 Brzezinski fired back after those tweets by sharing her own salacious tale about a frustrated Ivanka Trump being forced to shout at her father during a White House meeting when he ignored her attempts to discuss woman’s issues.

Brzezinski said that the ‘disturbing’ interaction made it clear that the billionaire businessman was ‘way too into’ being president.

At that point the two already believed that President Trump was ‘long gone,’ with Scarborough claiming that winning the election ‘has just amplified as of his insecurities,’ a conclusion he came too just hours after the inauguration when he got a phone call from the new Commander-in-Chief. 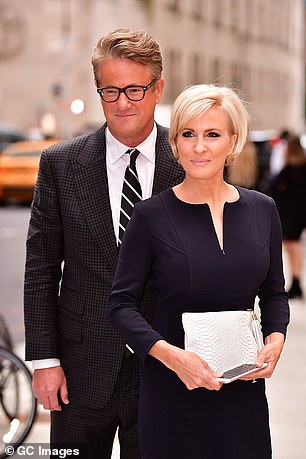 ‘I talked to him for three seconds. You know when you talk to somebody and you know they’re gone,’ explained Scarborough in a interview with New York last year.

‘Oh, this place is so great!,’ he recalled the President saying during that call, while also ‘talking about the phone system and all the, basically, toys, new toys he had — not his words.’

Scarborough added: ‘I remember getting off the phone really fast and, to Mika, I said, ‘He’s long gone. This is bad.’

Brzezinski soon found out first hand she said in the interview.

‘When I spoke to Ivanka that morning, she was like, “We’re really going to talk to him about some of these things that I want to do,”‘ recalled Brzezinski.

‘And I was all about supporting anything that’s good for empowering women, whether it’s a Republican as president or a Democrat. I’m open to hearing it all.’

Ivanka was still months away from actually having a formal position in the White House at the time, but that did not excuse the way her father treated her that day said Brzezinski.

She claimed that the First Daughter tried to bring up a discussion of woman’s issues, but was ignored by her father, who eventually offered up a ‘what?’

That eventually resulted in Ivanka shouting out ‘Women!’ and then ‘Woah-men!’ for emphasis said Brzezisnki.

Ivanka also began drawing the figure of a woman in the air with her fingers to try and help her father.

Brzezinski went on to state that President Trump finally responded to his frustrated daughter’s outburst by saying: ‘Oh, women. Yeah, honey. Yeah, honey. We can do that.’

On top of all this, President Trump also kicked things off that day by asking Brzezinski if she had been to the White House prior to visiting him in the Oval Office earlier that month.

Brzezinski explained that she first visited when she was 9 because her father Zbigniew Brzezinski was the national security adviser to former president Jimmy Carter.

President Trump tried to bounce back by then saying: ‘Well, I bet it was your first time, Joe.’

Scarborough informed President Trump that he got the chance to previously visit as well when he served in Congress two decades prior.

‘That was pretty much it for both of us,’ said Scarborough.

Brezezinski spoke about her father while appearing on Through Her Eyes.

‘When Trump’s name came up when I was reading him the paper in the hospital, how his face would cringe,’ she said.

‘And what I saw in his face was real pain, a real kind of knowledge that this was bad.’