Mikaela Shiffrin has confessed nerves, not illness or fatigue, were to blame for her vomiting before Friday’s slalom race at the Winter Olympics after she entered as the heavy favorite but finished in fourth place.

After her first run left her nearly a half second out of first, she told NBC she had thrown up before stepping into the starting gate.

‘That was kind of sudden. It almost felt like a virus,’ Shiffrin said, laughing. ‘Kind of puking, less about nerves. But we’ll see.’

She said there were concerns she may have picked up the norovirus that had plagued security staff at the Games and has now affected its first athletes.

But the 22-year-old later said she felt fine and dismissed that as an excuse after the race.

‘I don’t feel sick right now, I don’t think I have a virus,’ she told reporters after the race.

‘I was thinking that after the first run but it might have been a little bit of me trying to make an excuse.’ 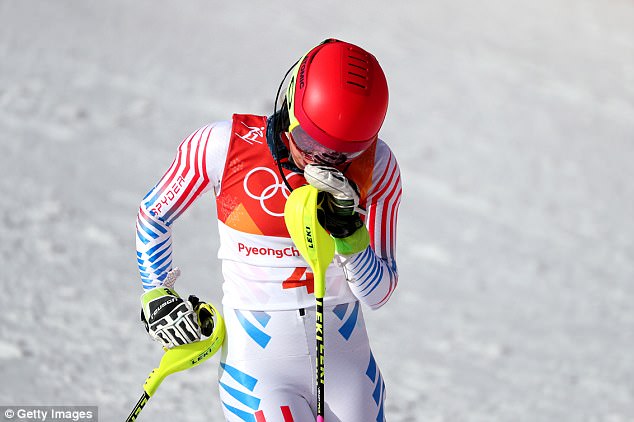 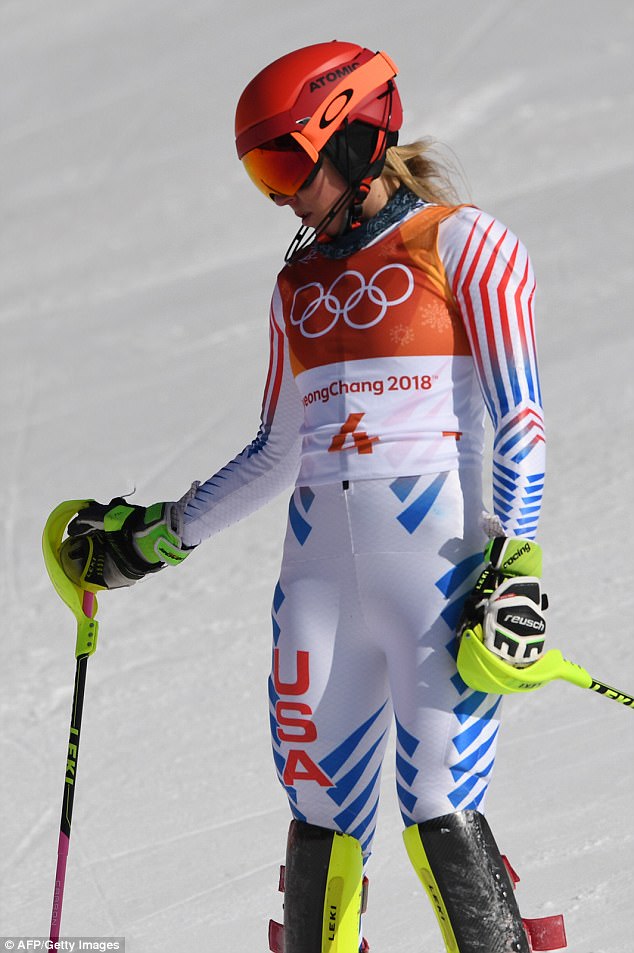 Shiffrin looks down after the race. She told NBC she was drained after her win in the giant slalom on Thursday 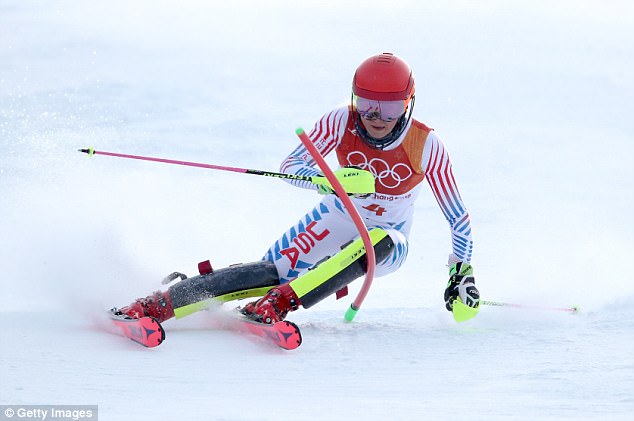 She had earlier said she was a little drained after all the interviews and other commitments that followed her win in the giant slalom on Thursday.

The medal ceremony didn’t start until about 8 p.m., and she didn’t get to bed until 10 p.m., which is very late for her these days.

‘I don’t think that, in and of itself, had a huge impact on my first run today.’ 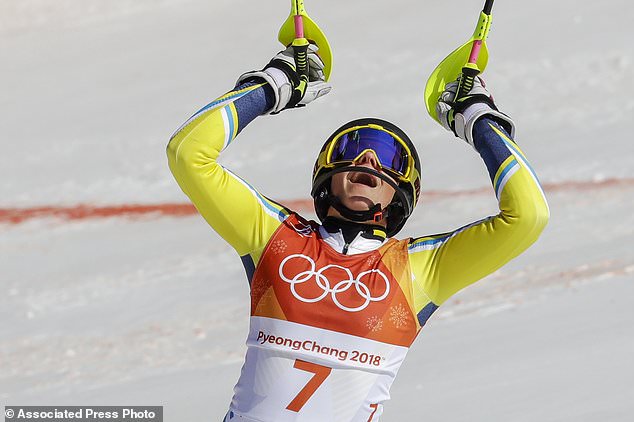 Frida Hansdotter, of Sweden, celebrates after her second run of the women’s slalom at the 2018 Winter Olympics in Pyeongchang, South Korea on Friday 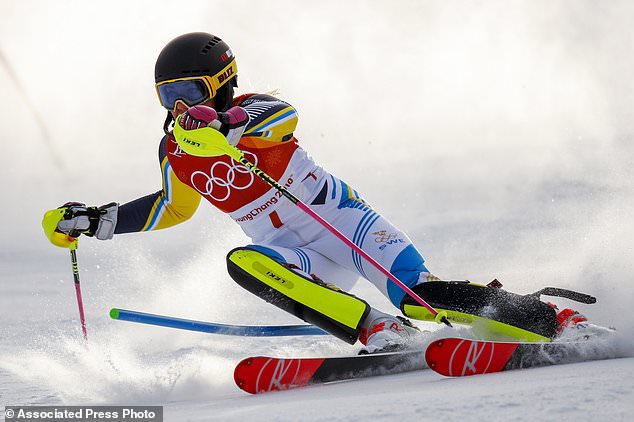 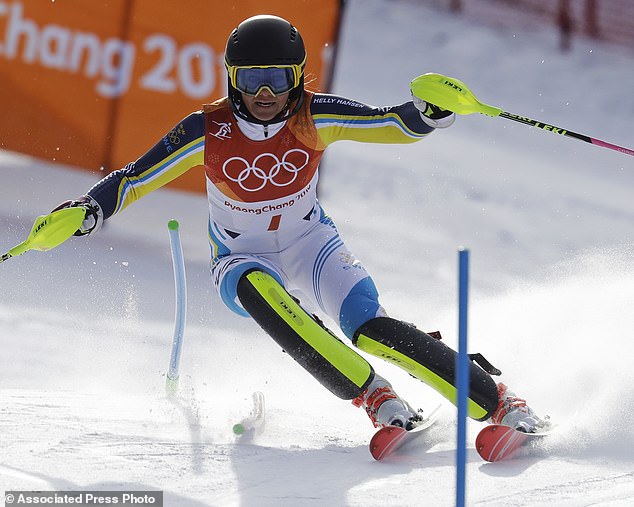 Hansdotter powered through the course on her final run to finish in a combined time of 1 minute and 38.63 seconds

In second after the first run, Swedish skier Hansdotter powered through the sun-splashed course on her final run to finish in a combined time of 1 minute, 38.63 seconds.

Shiffrin wound up fourth. The American standout won the Olympic slalom title four years ago in Sochi when she was only 18. 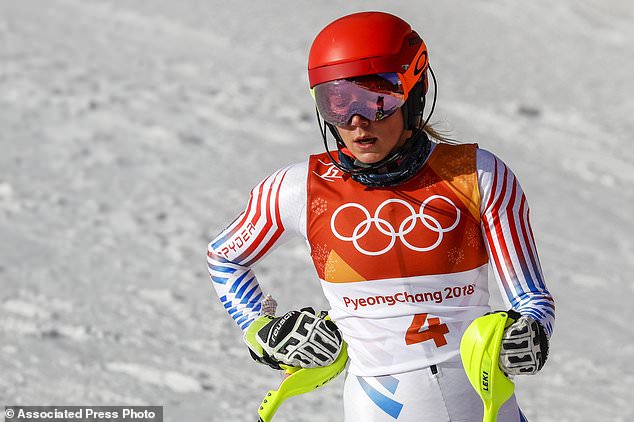 Shiffrin said she was her own worst enemy at the Yongpyong Alpine Centre.

‘I know I have the best slalom turns in the world but I didn’t put it out in the two runs where it mattered.

‘Coming here and today and skiing the way that I did, really conservative, was a huge, huge disappointment. It’s hard to explain how that feels but that’s how life goes.

‘It’s a really big bummer but I will learn.’

Shiffrin’s failure to medal in the event in which she is the World Cup leader and was the 2014 Sochi winner, came as a surprise even to her competitors.

‘When I went to the finish I thought, Mikaela must be in front but then I saw Frida cheering,’ silver medallist Holdener said.

‘So there have been a lot of surprises today. But Mikaela skis that good and she will do it another time.’

On Saturday, Lindsey Vonn will make her Pyeongchang Games debut in the super-G at the speed course in Jeongseon. Vonn missed the Sochi Games with a knee injury.

Shiffrin will skip the super-G race. 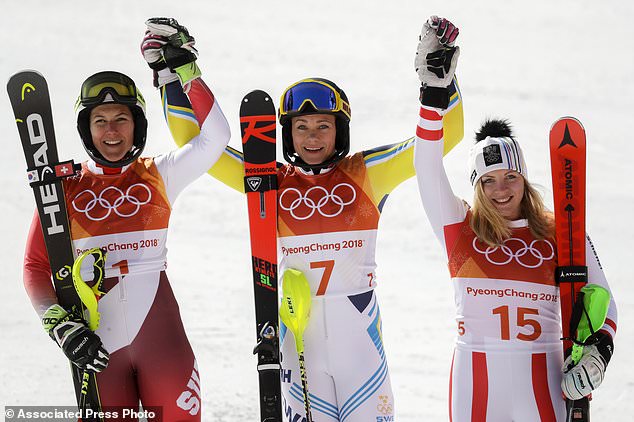 From left, Wendy Holdener, of Switzerland, Frida Hansdotter, of Sweden, and Katharina Gallhuber, of Austria, celebrate after their second run of the women’s slalom at the 2018 Winter Olympics in Pyeongchang, South Korea on Friday