Mike Tindall admitted he ‘hates’ wearing medals to formal royal engagements after coming under fire for sporting his honours at the Queen’s funeral events.

The ex-England rugby ace wore his MBE and Diamond and Platinum Jubilee medals as he joined his wife Zara Tindall at the Queen’s state funeral earlier this month.

He faced some criticism online from people who questioned why he was wearing medals when he hadn’t served time in the military.

Speaking on The Good, The Bad and The Rugby podcast he admitted he ‘hates’ wearing them but he ‘can’t control it’. 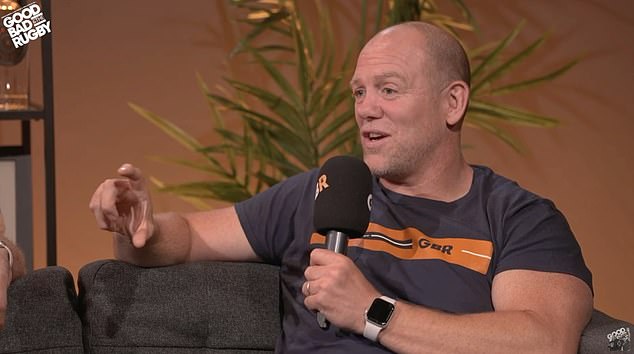 Speaking on The Good, The Bad and The Rugby podcast he admitted he ‘hates’ wearing them but he ‘can’t control it’

He said: ‘It has been an interesting one, we’ve had this discussion on the fact that I hate wearing them anyway.

‘I think you would be the same because you class medals as a military honour.

‘Any serviceman, I am deeply appreciative of your service and I have not served anywhere and actually haven’t done anything to achieve those medals apart from being in the family.

‘So the Jubilee medals, obviously I got married in 2011, so 2012 was her Diamond Jubilee and you get a medal if you’re part of the family.

‘The people who work in her household get a medal, and if you’ve been serving in the armed forces for five years, and you’re actively in service you get one too. 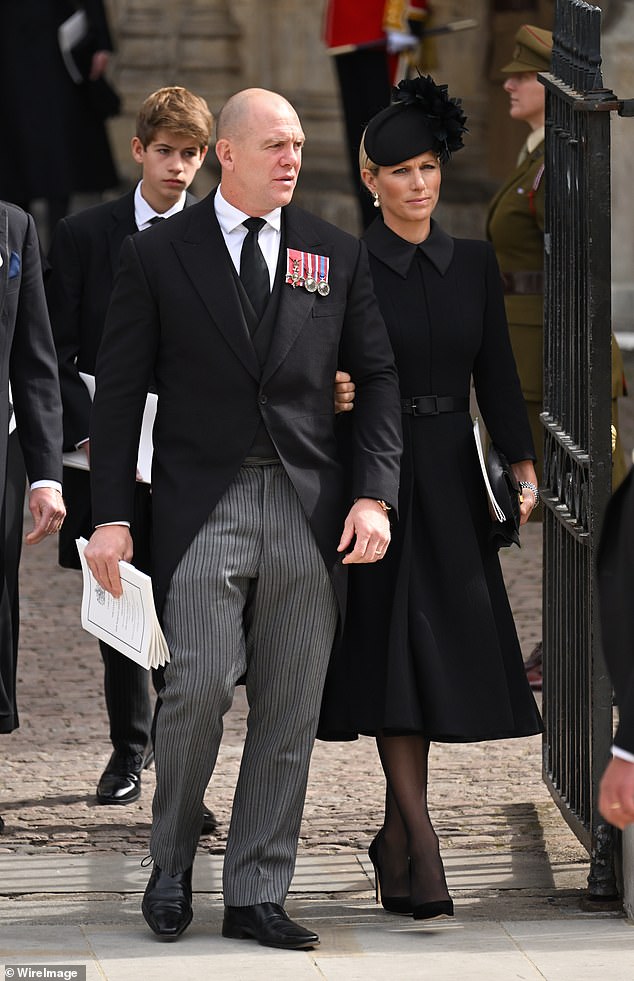 Mike, who is married to Princess Anne ‘s daughter Zara Tindall, revealed the heat he received was ‘unnecessary’ as he was wearing his MBE, awarded after his triumph in Australia, and his Diamond and Platinum Jubilee medals

‘So it’s harder for [people in the] military to actually get a Jubilee medal unless they served for a long time.

After his fellow podcast hosts James Haskell and Alex Payne raised the topic of the online controversy surrounding the medals Mike said it was ‘unnecessary’ because there is a ‘strict dress code’ and he ‘can’t control it.’

He said: ‘I did get a lot of unnecessary… you don’t have to shout at me on social media by the way. You can just ask and if you just ask I’ll probably reply to you, as one person did.

‘I can’t control it, you get a uniform list and it says the dress code is strict, you wear a morning suit unless you’re military. 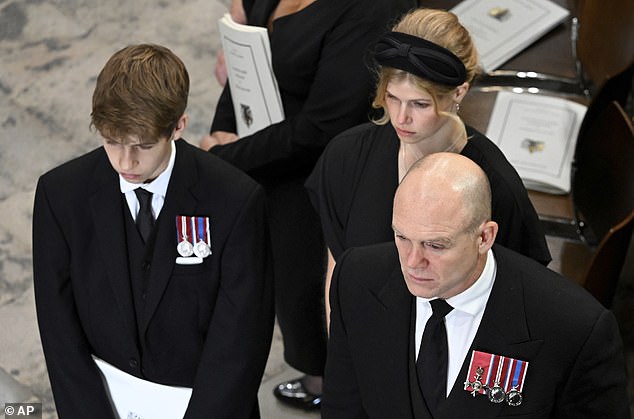 Mike admitted he ‘can’t control’ what he wears saying ‘you get a uniform list’ and their is a strict dress code (Pictured left, James, Viscount Severn, Lady Louise Windsor and Mike at Westminster Abbey) 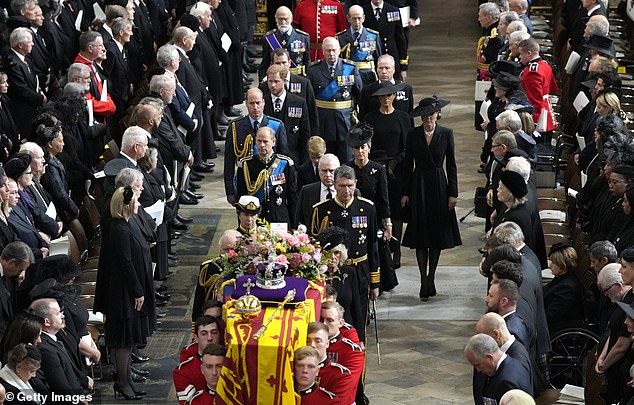 In a previous episode he spoke of how the Royal Family ‘came together overnight’ following the death of the Queen.

Mike also admitted he is ‘full of regret’ for not asking the Queen more questions during his time with her.

Tindall reflected on his relationship with the Queen in a special episode of his podcast after he death.

He said: ‘It’s been sad, emotional but happy. In some ways amazing. To see the family come so close together overnight.

‘You never predict it. A 96-year-old lady, you know it’s going to happen but you’re never ready for when it does.

‘Watching what Zara had to go through, obviously she loved the Queen beyond everything else. Their connection with horses, they had a real bond around that.

‘It’s like the world has lost its grandmother in some way.’

He continued: ‘I also have loads of regrets about not asking her so many more things… Having nervousness when you sit there get that lucky seat of being sat next to her. 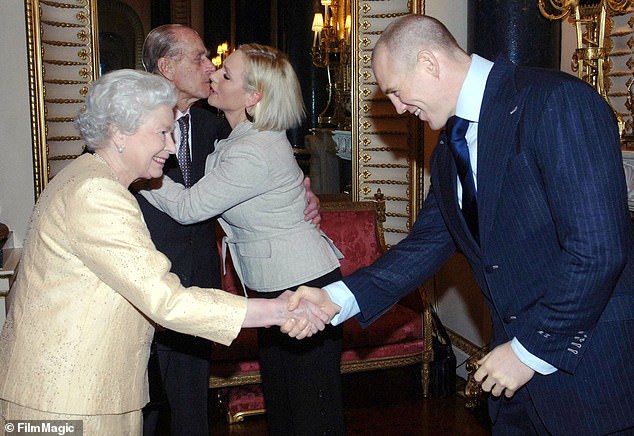 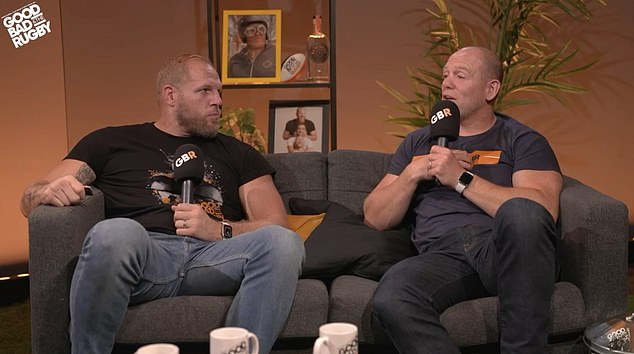 ‘Going back through history and everything she’s possibly seen; 15 prime ministers, I don’t know how many presidents.

‘To go through everything when she’s meeting dictators she has to stay neutral she has to perform her duty.’

Later in the podcast, he said the Royal Family had been ‘blown away’ by tributes from members of the public.

‘You expect an outpouring of love but I think how it was, the world leaders that came in accepted their invitation without question. Immediately came back and said ‘yeah we’re coming’,’ he said, adding there was ‘no jostling for positions’ between the hugely important guests.

Talking about the Queen’s funeral arrangements, which she was consulted on before her death, Mike revealed he had been told a story (although he could not verify it) about the plane that was due to fly Her late Majesty’s coffin from Scotland back to London.

He said the plane that was originally intended to carry her was too small, and instead officials had suggested a larger plane that had been used to carry the bodies of servicemen back from Afghanistan. 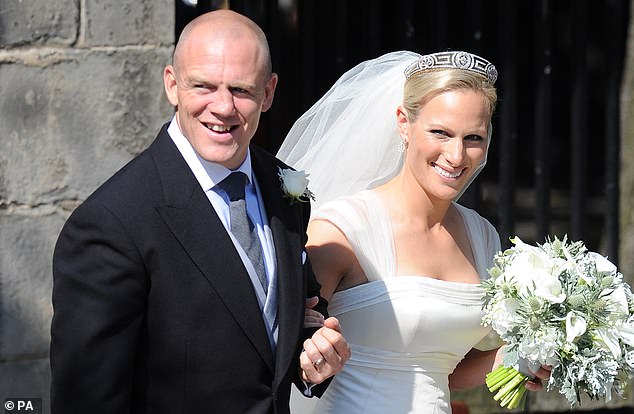 Mike added: ‘It sort of sums her up that it was ‘her boys’.’

As other podcast hosts James Haskell and Alex Payne admitted they had shed tears following the Queen’s death, James said he ‘woke up every single morning with… a dull ache internally’ that someone so remarkable had passed away.

Speaking about the Queen’s state funeral which was attended by some 2,000 world leaders, foreign royals and civilians, Mike admitted the family didn’t necessarily realise how big the televised event – watched by an estimated 4 billion people worldwide – was until he switched on the highlights later on.

He added it was ‘positive’ to be a part of the funeral because so many people showed unity in lining up to pay their respects to Her late Majesty.

Mike also praised the Queen’s strength in keeping some parts of herself private from the rest of the world – using the example of how Her late Majesty sat alone at the funeral of her beloved Prince Philip.

He said: ‘Because of where the pandemic was at that time, she made the real statement to everyone else – unfortunately our government wasn’t watching – of how he needed to be.’

The ex-England star appeared to be referring to reports a party was held in 10 Downing Street the night before the Duke of Edinburgh’s funeral.

Although Mike officially joined the Royal Family in 2011 when he married Zara, he revealed he had actually met the Queen 19 years earlier in 1992, when she came to visit his school, Queen Elizabeth Grammar, on its 400th anniversary.

‘I think I was in a science class and she came in… got the Bunsen burner on,’ he said. ‘I got to say hello to her then.’

As the Royal Family and the nation gets used to the new monarch, King Charles, Mike revealed old habits die hard.

‘I almost curtseyed to the King the other day,’ he said. ‘I was just following behind my wife, I saw her curtsey and fortunately didn’t… it was a lower bow.’

He added he ‘styled it out alright’ and hopefully got away with it.