Mikhail Baryshnikov has opened the doors to his opulent vacation home in the Dominica Republic after restoring the spacious property he built two decades ago.

The 70-year-old Russian ballet dancer and his wife Lisa Rinehart, a ballerina-turned-journalist, posed in various rooms in their home for a stunning editorial featured in the latest issue of Town & Country magazine.

Located in the residential community at the Puntacana Resort & Club, the property features an infinity pool near the ocean, a dance studio where the choreographer develops new pieces, and a massive ‘Romeo and Juliet’ balcony that would even make the star-crossed lovers swoon.

Paradise: Mikhail Baryshnikov, 70, has opened the doors to his opulent vacation home in the Dominica Republic for a stunning Town & Country spread 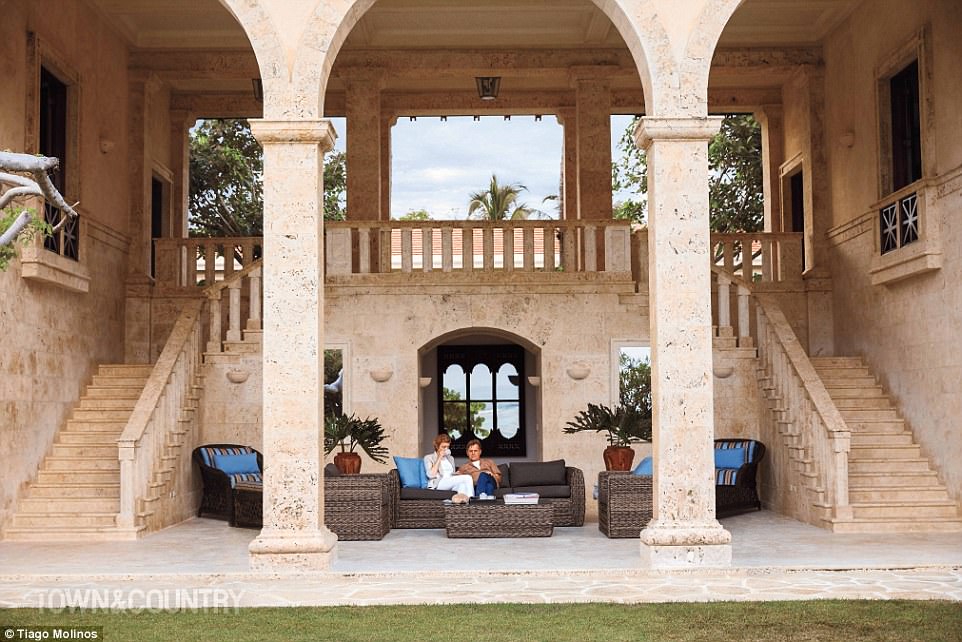 Romance: The Russian ballet dancer and his wife Lisa Rinehart struck a pose underneath their ‘Romeo and Juliet’ balcony 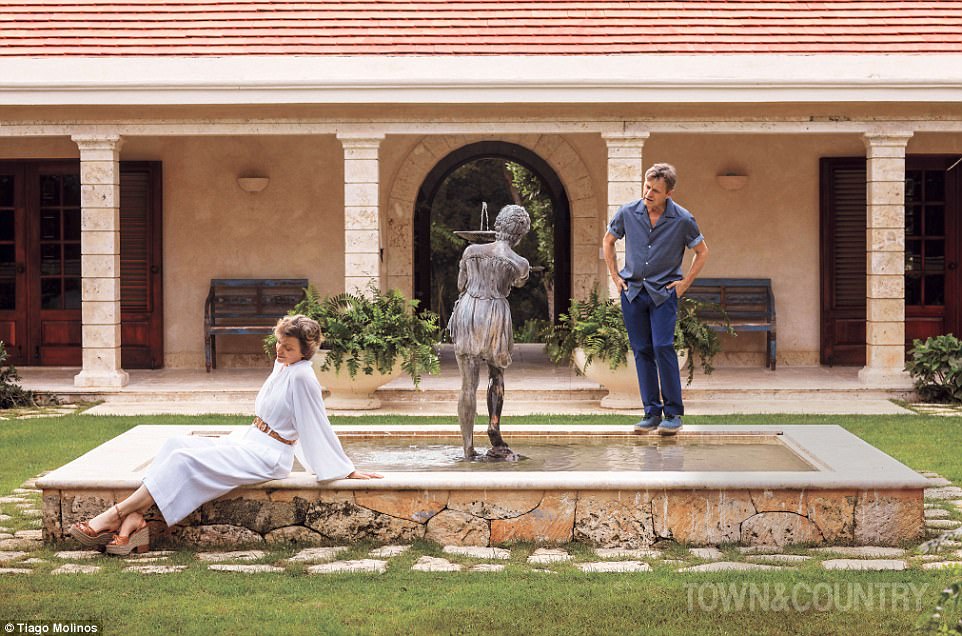 Home away from home: Baryshnikov said the section of the home facing the driveway (pictured) is ‘like a deconstructed Roman villa or a cloister’

Baryshnikov told the magazine that he fell in love with the Dominican Republic in 1998 after the late designer Oscar de la Renta asked him to perform at a benefit for an orphanage he built in La Romana.

Once the dancer saw the designer’s beautiful home and the views of the water, he became ‘totally smitten’ with the area.

‘Oscar [who died in 2014] and his wife Annette are people of such extraordinary taste in everything they do — gardening, furniture, food. You can’t imagine the beauty of the place,’ he said.

Rinehart noted that her husband isn’t one to call to gush about where he is staying, so she knew it meant something when he called her that morning to say he was ‘in Eden.’

She said the ‘seduction’ was complete when Baryshnikov had a lengthy lunch at Julio Iglesias’ home, which was also located at the resort. 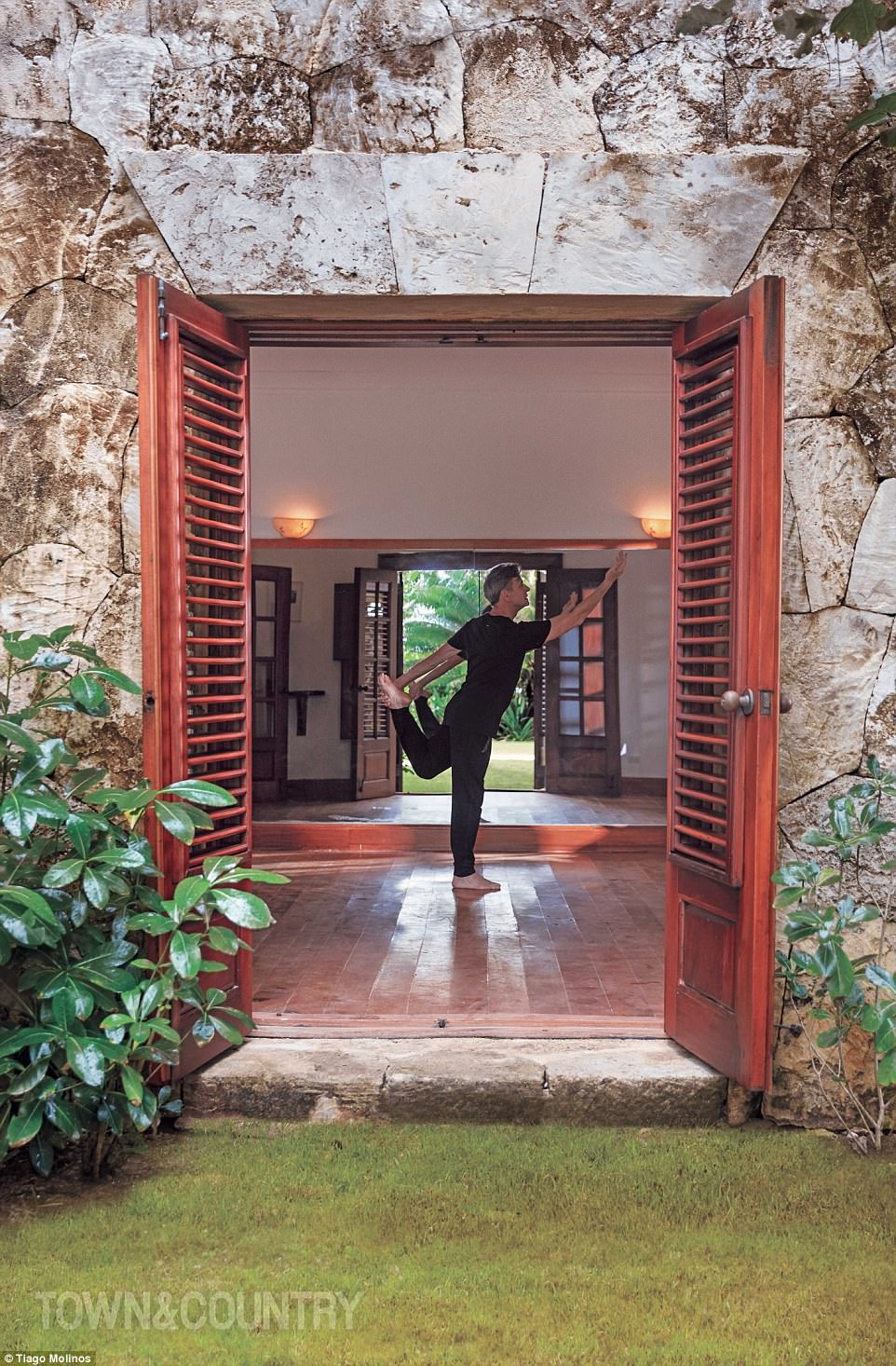 Added touches: The home boasts a dance studio for the choreographer to develop new pieces, as well as space to host visiting dancers 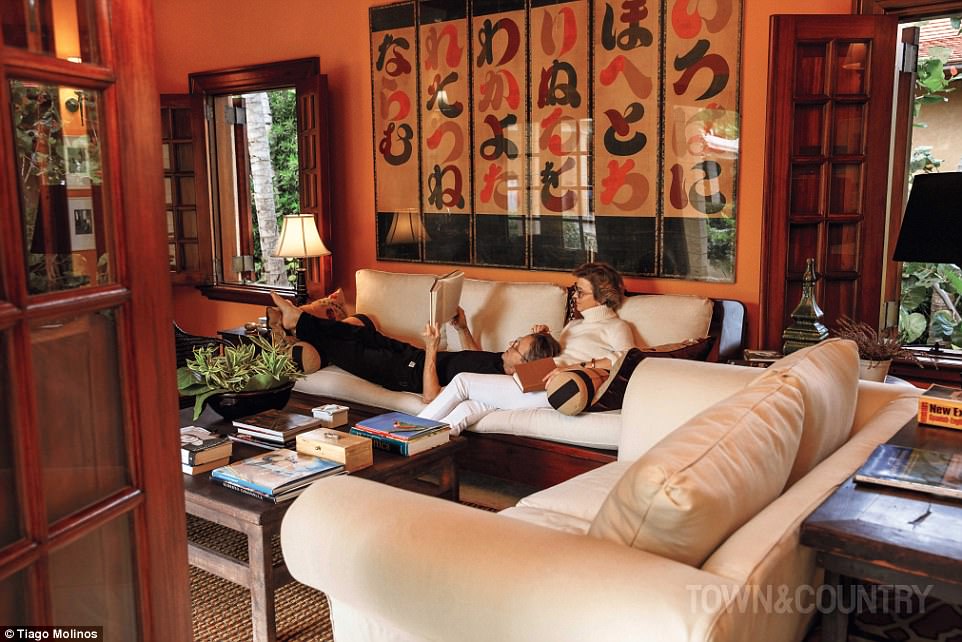 Art collectors: The couple, who redecorated their vacation home last year, has an antique Japanese screen hanging in their upstairs reading room 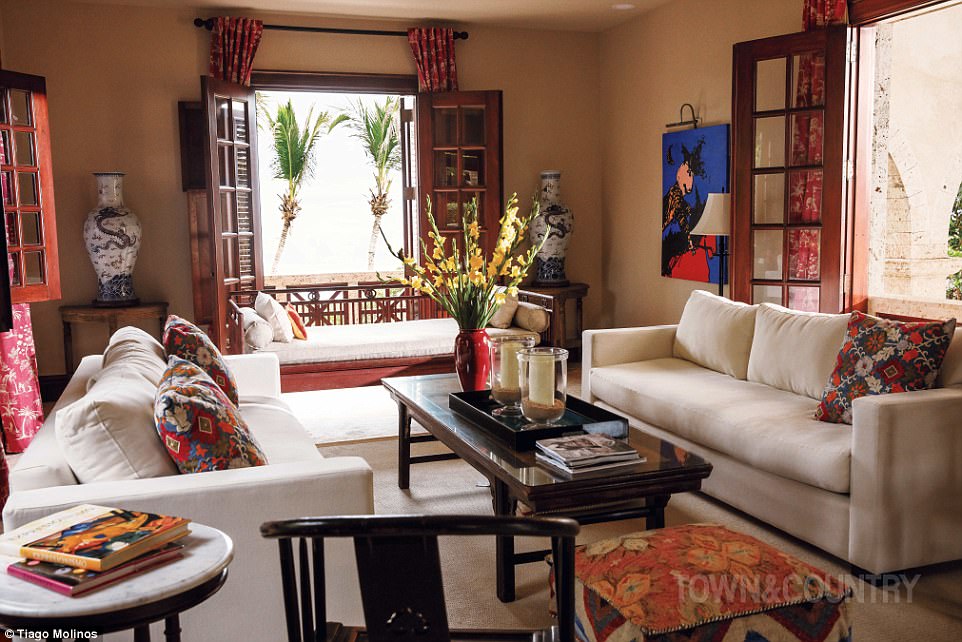 Choice seating: An antique daybed that Baryshnikov bought in China was place be a window with a view of the water

De la Renta and Iglesias were the first two people to build homes in the area, and designer explained to Baryshnikov that there was going to be a residential community called Corales built inside the Puntacana Resort & Club.

They promised him there would be ‘very few people’ in the area before offering him a piece of land for a ‘very good price.’

Baryshnikov accepted their generous offer, and de la Renta suggested he meet with Ernesto Buch, the architect who had designed his home.

When Baryshnikov and Rinehart sat down with him, the architect said he wanted to do ‘something theatrical’ with ‘squares, arches, colonnades, and a touch of Spanish.’

It took two years to construct the spacious home, which was built into a land slope on two levels. 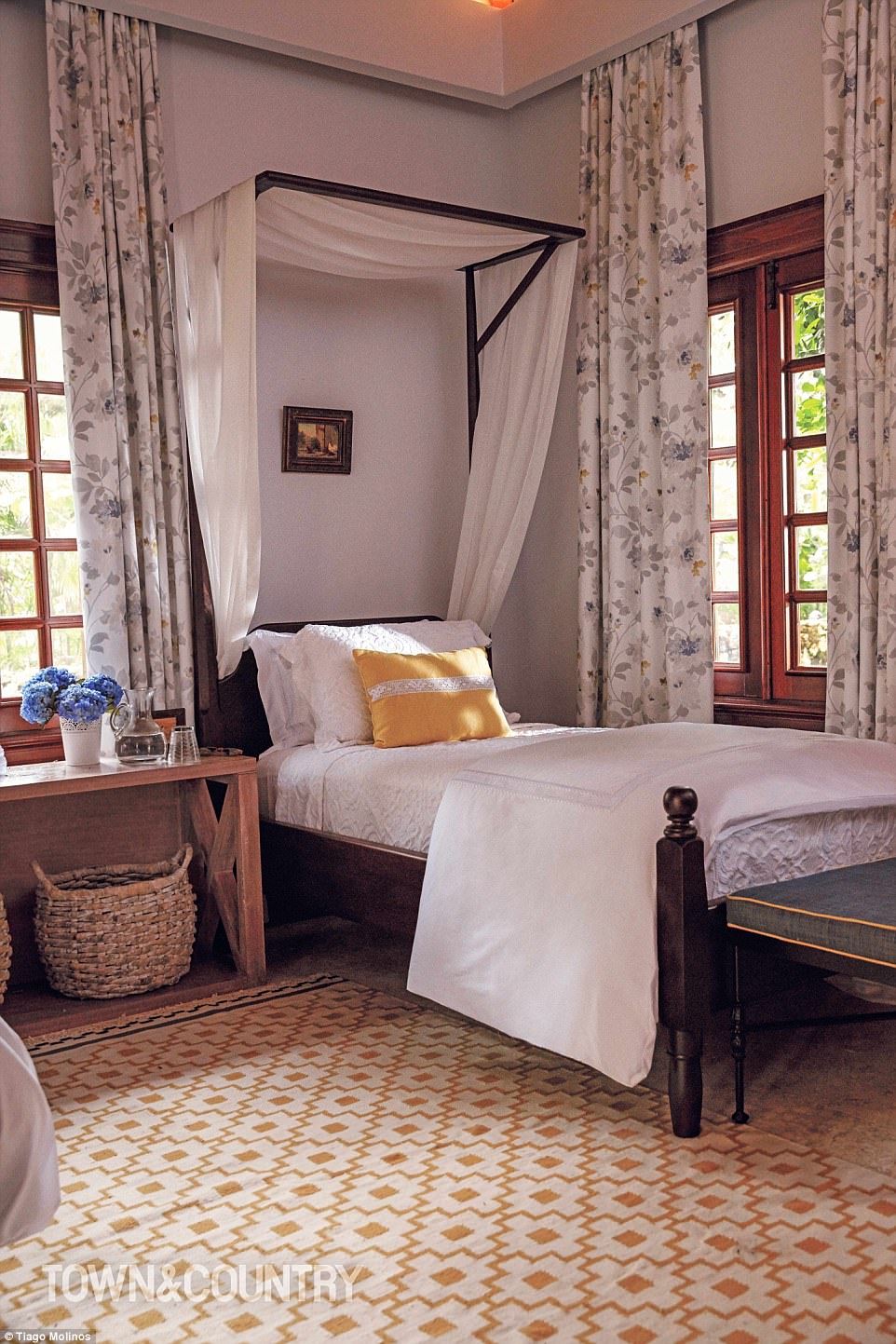 Elegant decor: One of the bedrooms in the house features a cheerful yellow and white rug and floral curtains 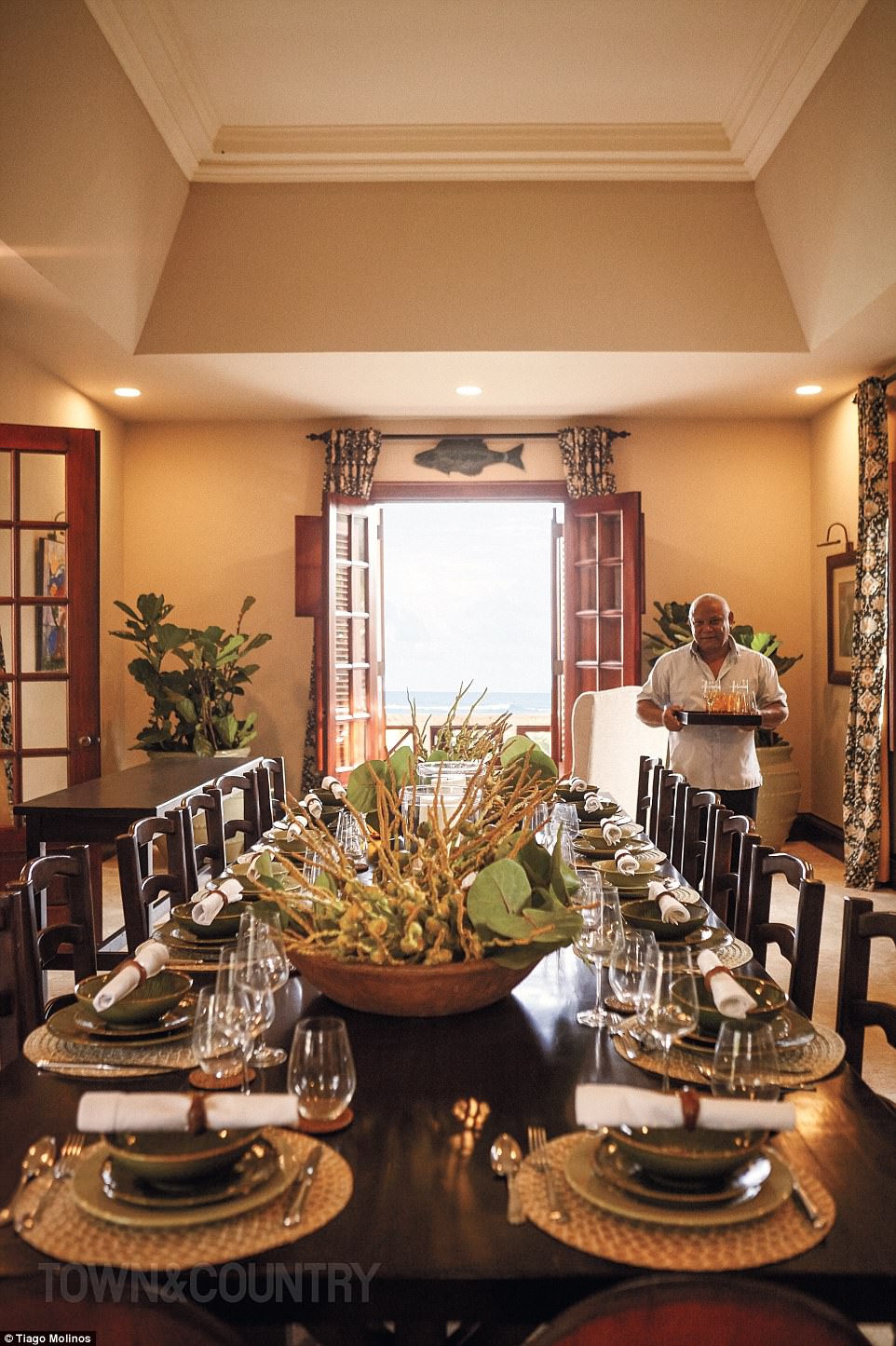 Spacious property: Baryshnikov and Rinehart said their children love to entertain their significant others and friends at the home 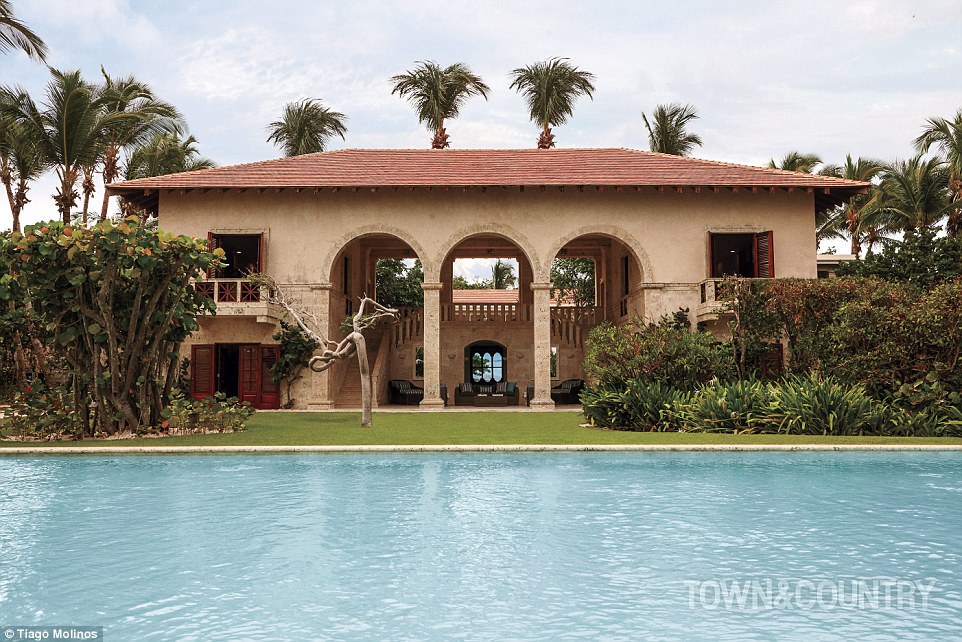 Exclusive: The property, which they built two decades ago, is located inside the residential community at the Puntacana Resort & Club 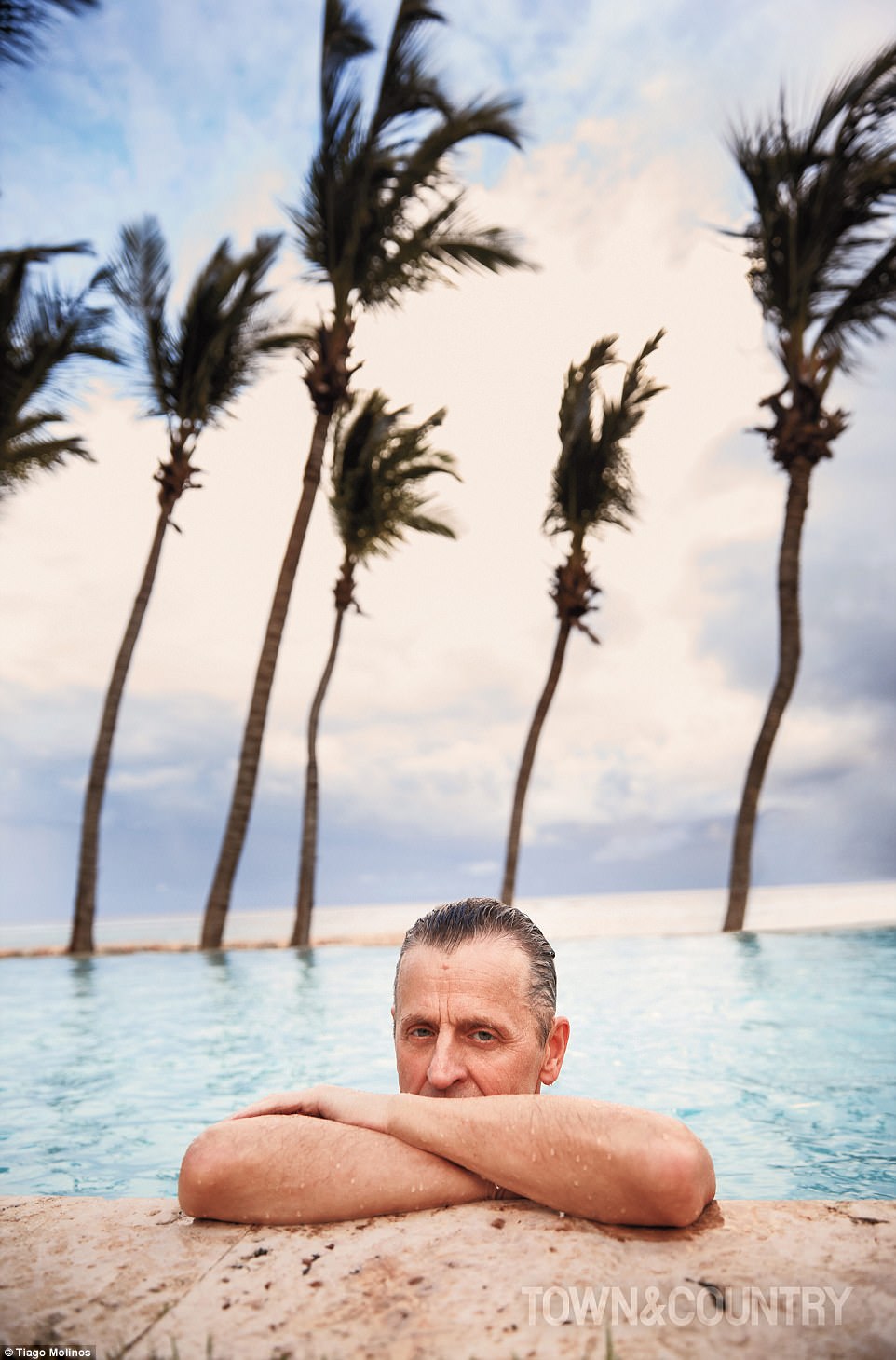 Can’t beat the view: The home features an infinity pool that overlooks the ocean. When the couple isn’t using the property, they like to rent it out

‘The upper section facing the driveway is squarish, with a courtyard surrounding a little fountain. It’s like a deconstructed Roman villa or a cloister,’ Baryshnikov explained.

‘The side facing the ocean is two stories and has what I like to call a Romeo and Juliet balcony. The house looks rather grand from the ocean but not imposing from the land side.’

Baryshnikov and Rinehart have three children together, Peter Andrew, 28, Anna Katerina, 25, and Sofia-Luisa, 23. The dancer also has a 36-year-old daughter, Shura, with his former partner, actress Jessica Lange.

Their children were still young when the property was completed, and they didn’t have a lot of furniture at the time. The couple got the impression that their kids would have rather been on vacation somewhere that was a bit more entertaining.

However, Baryshnikov noted that they ‘adore it’ now that they are adults and can use the property to entertain their significant others and friends. 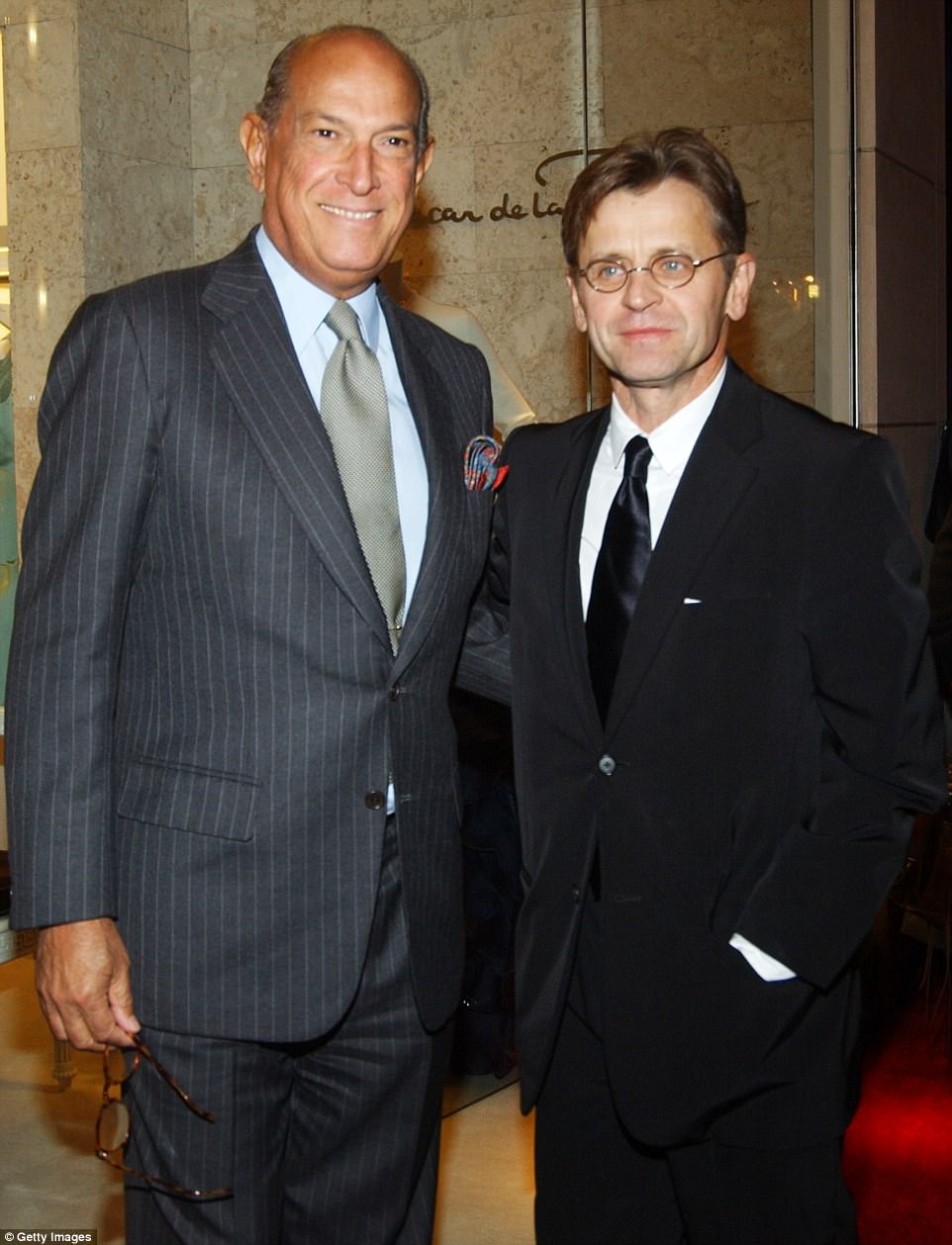 Start of it all: Baryshnikov fell in love with the area when he visited Oscar de la Renta’s Punta Cana home in 1998. It was the late designer who urged him to buy property in the community. They are pictured together in 2004 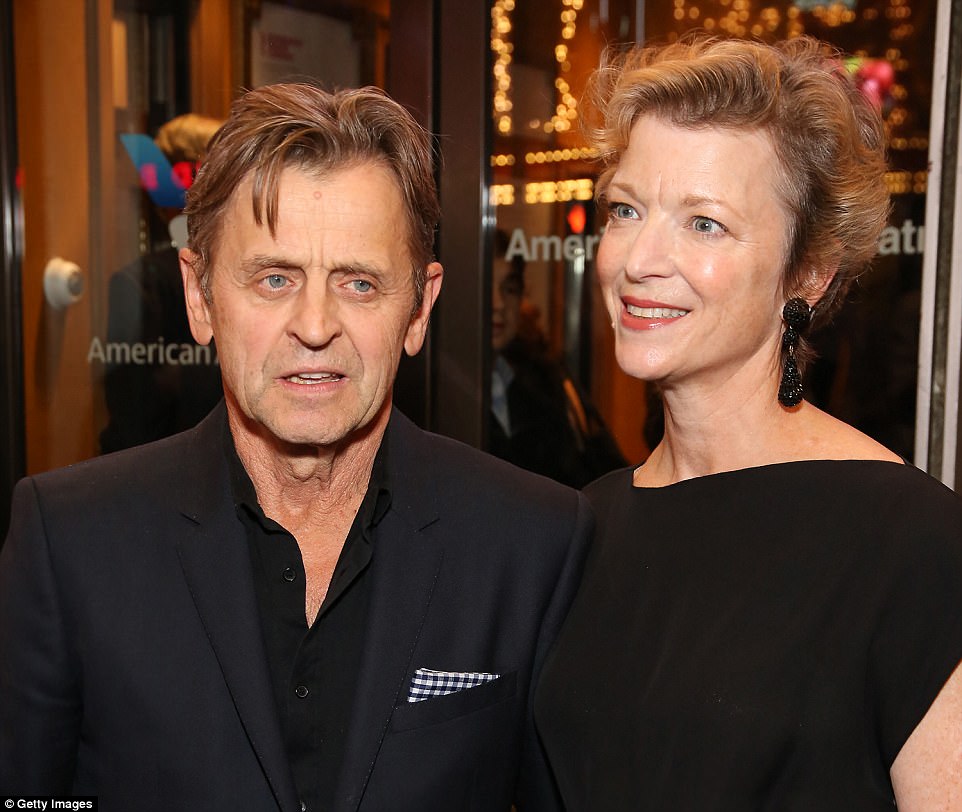 More than a vacation house: Baryshnikov and Rinehart (pictured in October 2017) see the home as a place to get together with friends and family, as well as pursue their passions 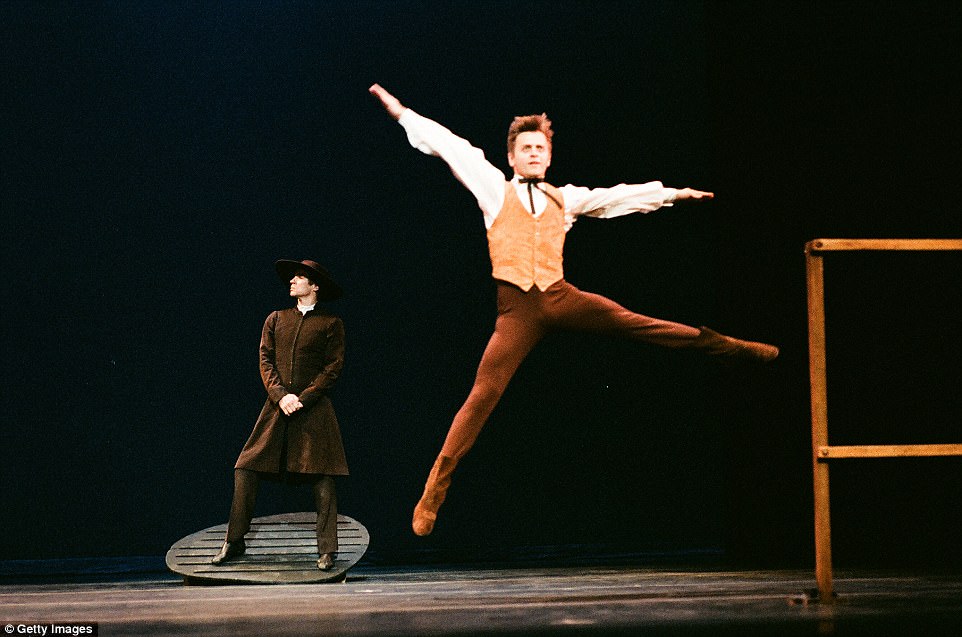 Throwback: The Russian-born dancer is pictured performing Appalachian Spring in 1987 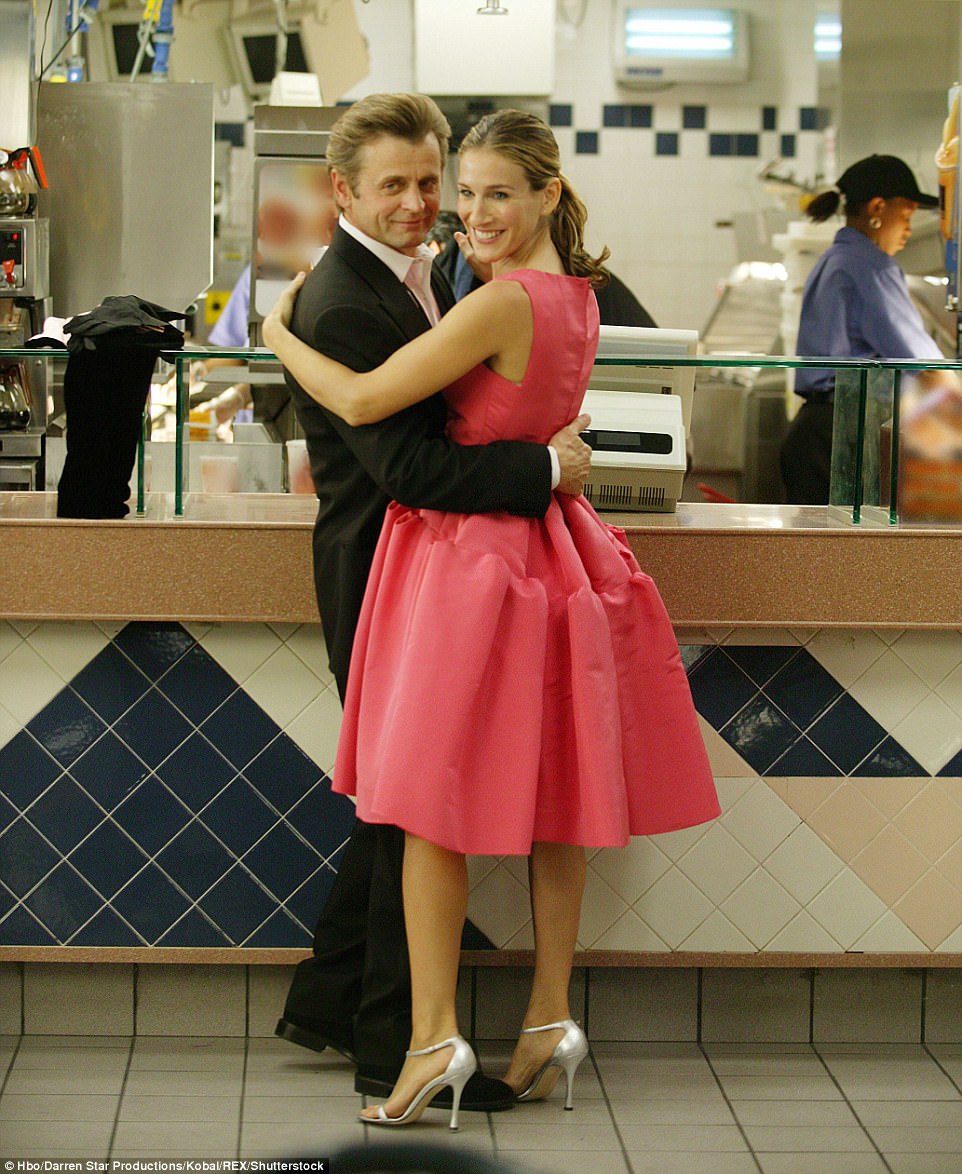 TV star: Baryshnikov famously played Aleksandr Petrovsky, the love interest of Carrie Bradshaw on Sex and the City. He is pictured on set with actress Sarah Jessica Parker, who played Carrie

The furniture they accumulated over the years has come from all over the world, including pieces from their previous homes in Connecticut and St. Bart’s.

The home also features pieces  from their homes in New York and Paris, furniture from an antique store in China, and Russian furniture that came from the St. Petersburg apartment of Baryshnikov’s late teacher.

Last year the couple decided to restore and redecorate the home. They added more amenities, chose new linens and curtains, and had their furniture professionally restored.

The family uses the home to get together and pursue their passions. Rinehart likes to read, write, and visit friends, while she staying on the property.

Baryshnikov, meanwhile, has completed a few projects at his studio inside the home. He also likes to play golf and go fishing in his down time.

‘The furniture and art serve as a sort of history book,’ he explained.

‘Every painting and every chair triggers something different from the last 40-plus years, since I’ve been in the United States, and all the places Lisa and I have been.’

Fans of the dancer will be happy to know that the couple rent the place when they’re not using it, but it’s safe to say it probably costs a pretty penny.