Mila Kunis honored as Hasty Pudding’s Woman Of The Year

Mila Kunis got her very own parade in Cambridge, Massachusetts, on Thursday.

The actress, 34, beamed as she was driven around town in celebration of Harvard’s Hasty Pudding Theatricals honoring her as Woman Of The Year.

Mila was flanked by members of the satirical group as she rode along in a Bentley Convertible waving to the crowd. 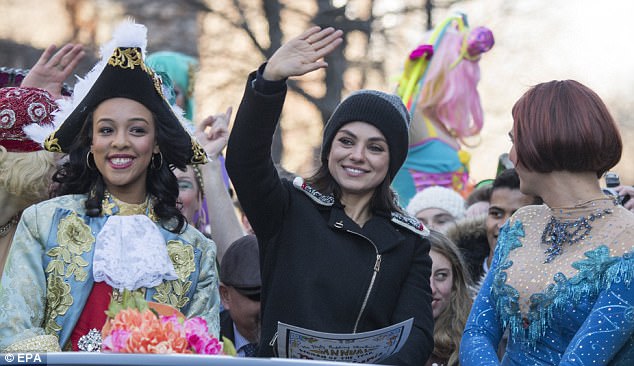 Quite an affair: The 34-year-old actress waved to the crowd as she was driven around in a Bentley Convertible flanked by members of the group 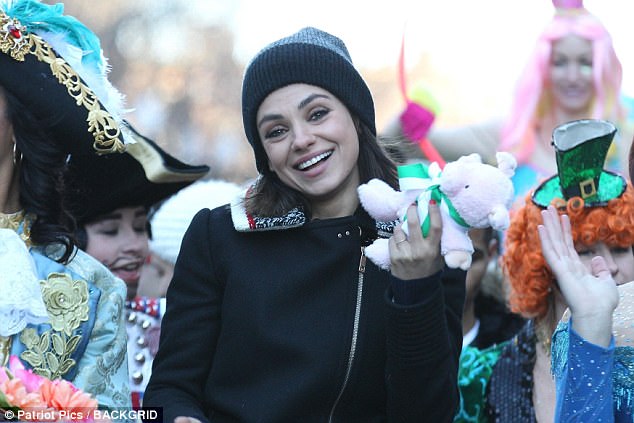 Stayed warm in style: The Black Swan star wore a beanie and a warm winter coat

The LA-based celebrity, who is married to Ashton Kutcher, wore a striped beanie and a warm black winter coat.

Hasty Pudding members had joined her during the parade, dressed in elaborate period costume and slathered in heavy makeup.

Mila grinned as the two Hasty Pudding members at either side of her leaned in and each planted a kiss on her cheek. 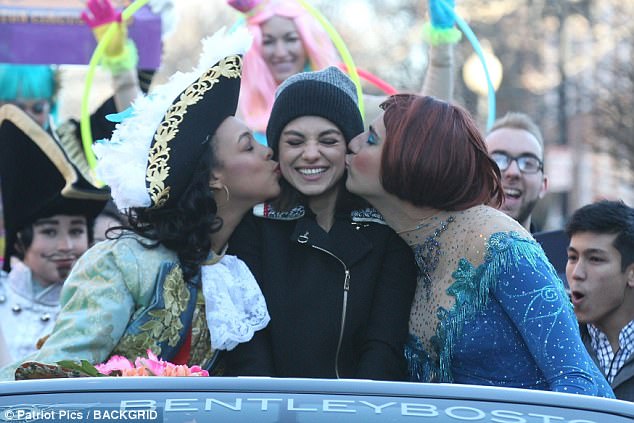 So much love: Mila grinned as the two Hasty Pudding members at either side of her leaned in and each planted a kiss on her cheek 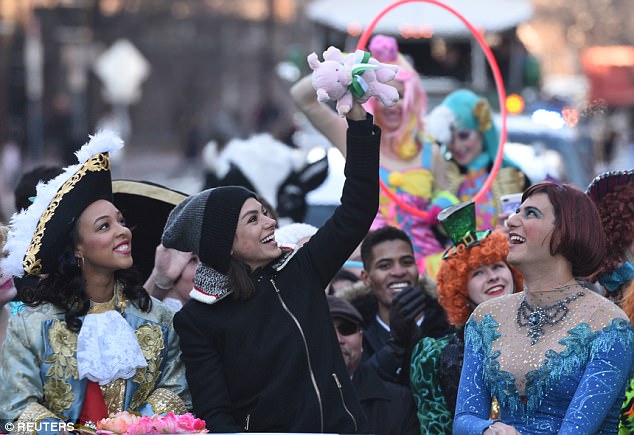 Feted: Mila seemed to be having a wonderful time during her parade

Inside the event, Mila lost the coat and hat and was photographed laughing during her roast.

She did manage to get her own back as well, at one point, she standing up and smearing a dessert onto the face of one of the troupe’s cast.

Once the roast was over, Mila posed up a storm with her Woman Of The Year trophy, which was shaped like a pudding pot.

The Black Swan star was snapped in Farkas Hall, standing in front of a plaque that bore her name along with several past Hasty Pudding honorees. 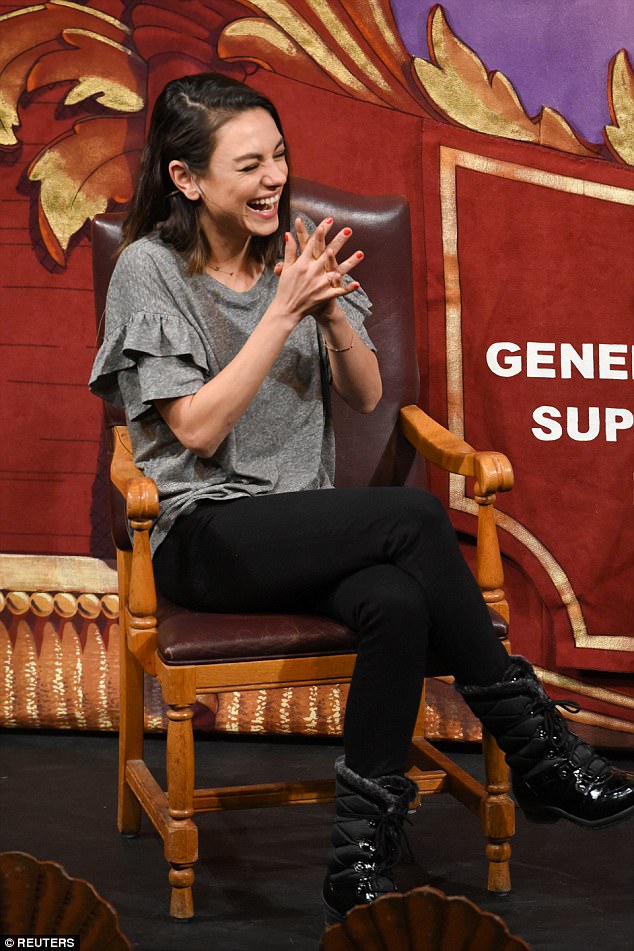 Taking it in stride: Inside the event, Mila, dressed in black skinny jeans and a gray t-shirt,  laughing uproariously during her roast 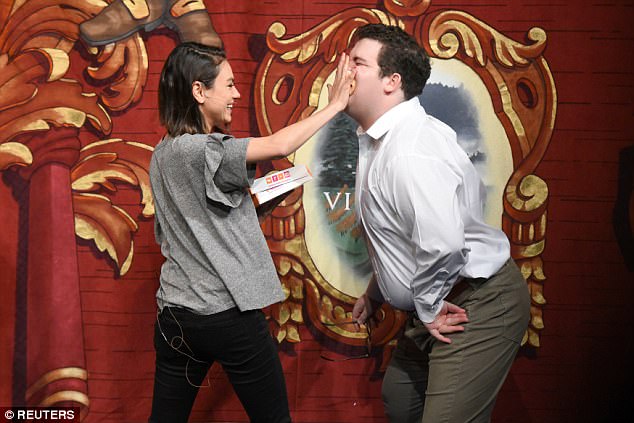 Slapstick: She did get her own back, smearing a dessert onto the face of one of the troupe’s cast 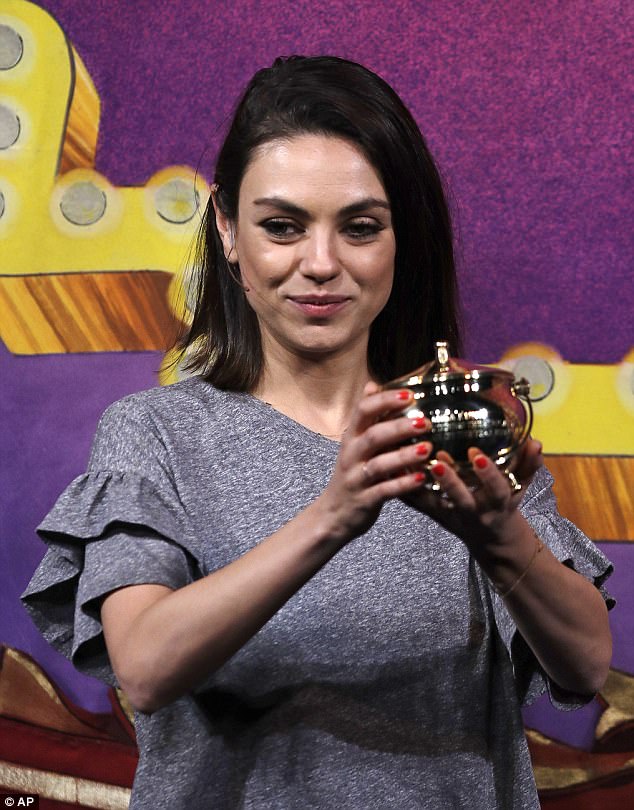 The spoils: Once the roast was over, Mila posed up a storm with her Woman Of The Year trophy, which was shaped like a pudding pot 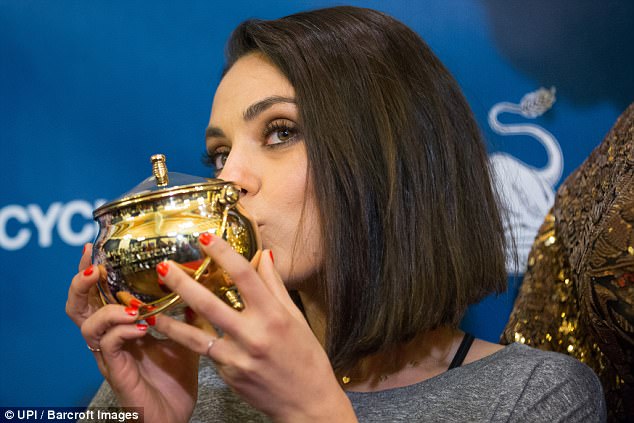 It’s not an Oscar: She planted a smooch on her new accolade

A small number of protesters had arrived to denounce Hasty Pudding, which did not cast women in its yearly shows and instead featured men in drag.

However, during the festivities for Mila, Hasty Pudding revealed it would begin admitting female cast next year, the Associated Press reported.

Two women protesters were also seen with cheery smiles on their faces as they posed carrying their signs.

One of them read: ‘PATRIARchy IS A DRAG,’ while the other blared: ‘TAKE YOUR Misogyny And Shove it up your FARK-A**’.

Farkas Hall is the building at Harvard where Hasty Pudding is based.

Two other protesters were photographed unsmiling and holding signs, one of which read: ‘Shut up, Meg!’

Meg Griffin is the character Mila voices on the animated comedy series Family Guy. Perpetually unpopular, she is often snapped at: ‘Shut up, Meg!’ 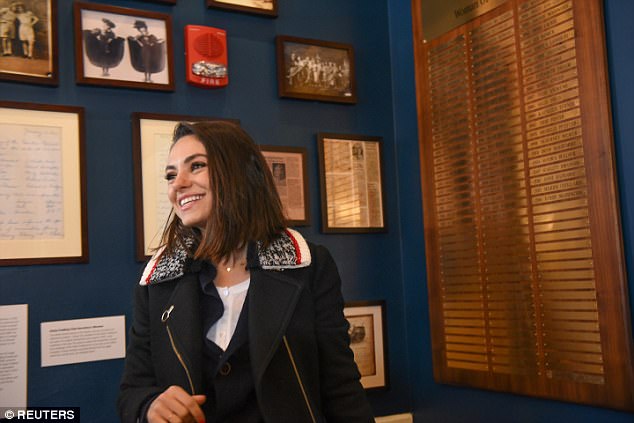 What a treat: Mila also posed for photos standing in front of a plaque listing Hasty Pudding winners on which she put her name 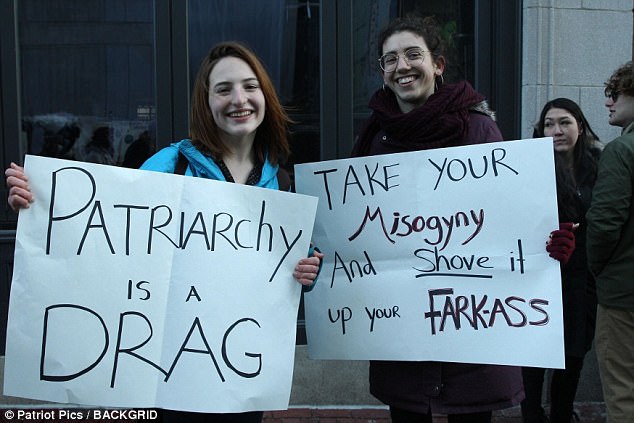 Not everyone was impressed: Some protesters came out to protest the history of the Hasty Pudding Theatricals that until now has been men only 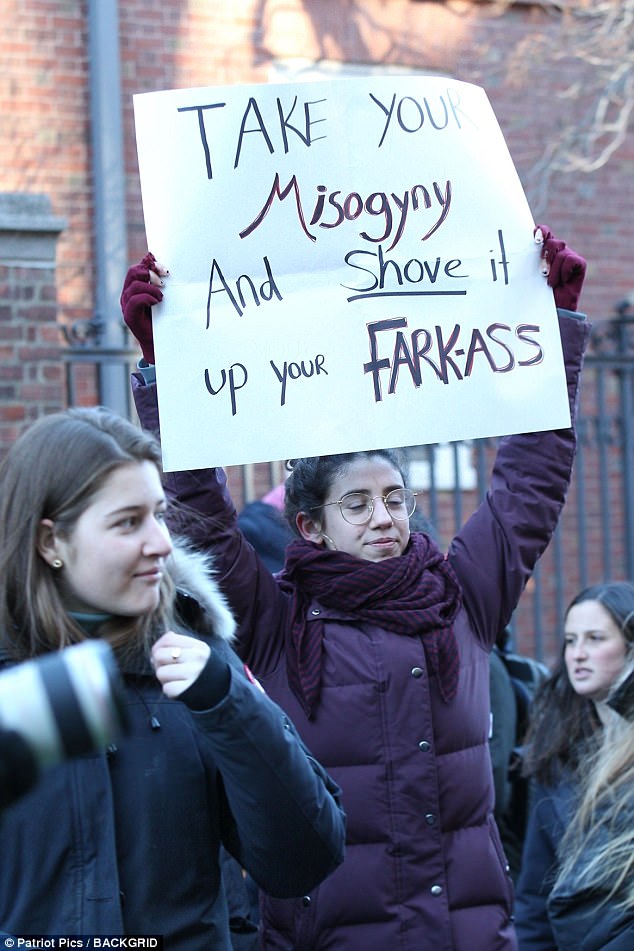 Effecting change: However, the AP reported that the society has agreed to change its rule and start allowing women to join 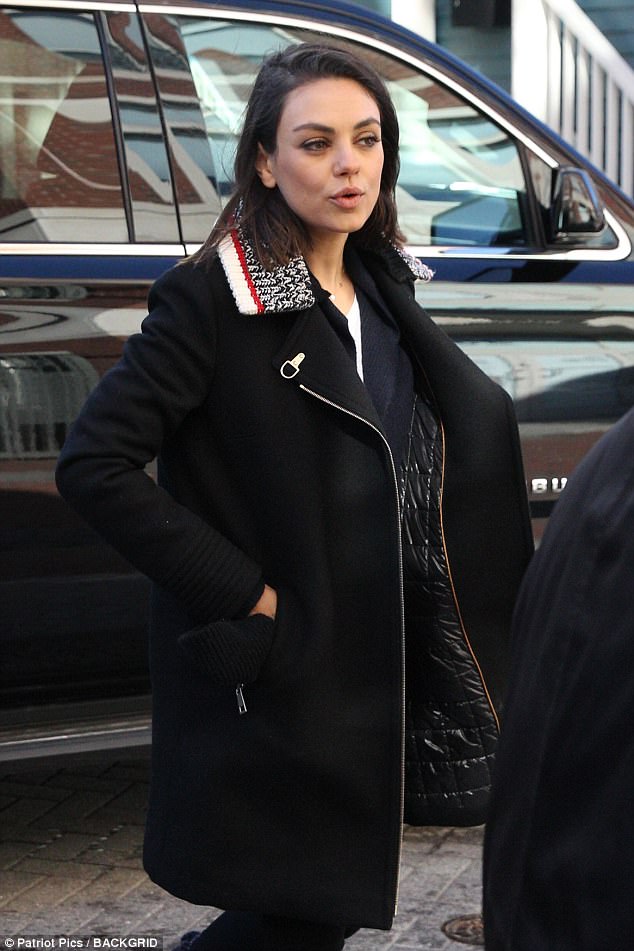 Out and about: Mila was also seen that day strolling outdoors on the Harvard campus

So stylish: She teamed a pair of glinting black boots with matching skintight pants, shielding her hands from the cold by shoving them in her pockets