Millions of Christians gathered in churches around the world to celebrate Mass on Christmas eve and early on Christmas Day.

President Trump and wife Melania were pictured at the National Cathedral in Washington DC while Pope Francis led a midnight Mass service at St Peter’s Basilica in Vatican City.

From Bosnia to the United Arab Emirates, and Kosovo to Iraq, people joined together in a moment of solemn reflection and prayer as they prepared to celebrate the birth of Jesus Christ. 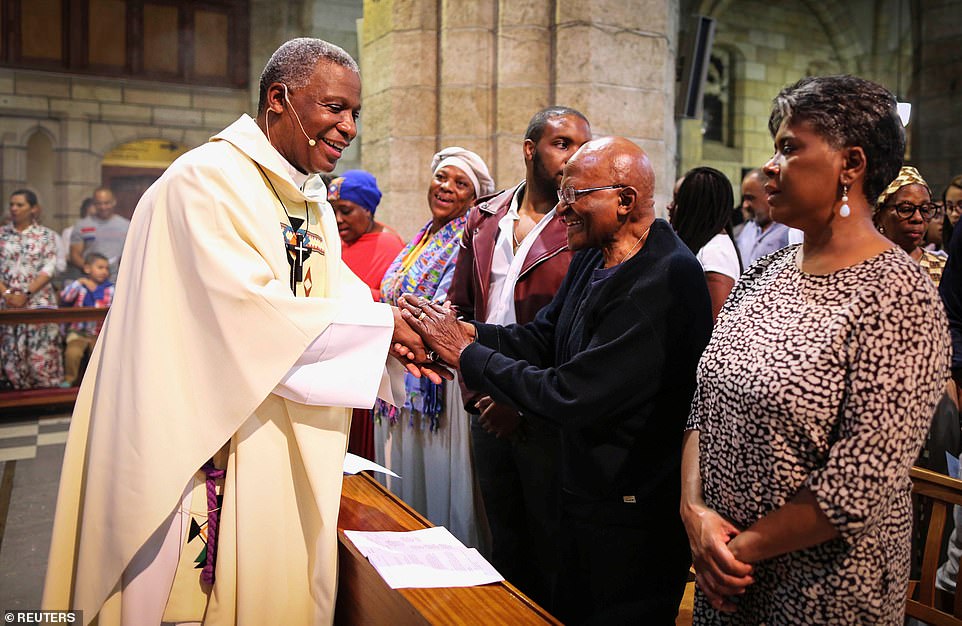 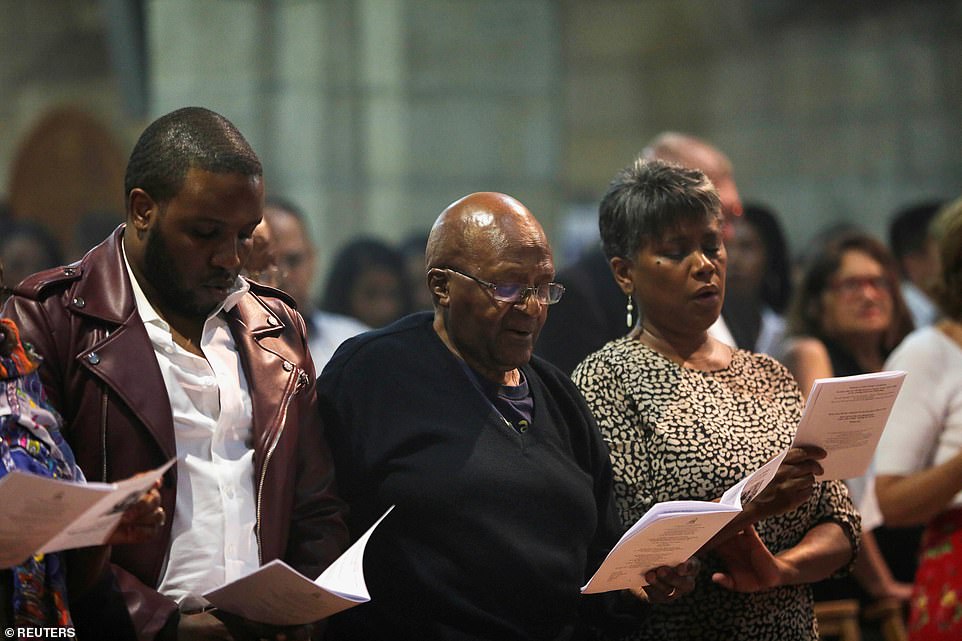 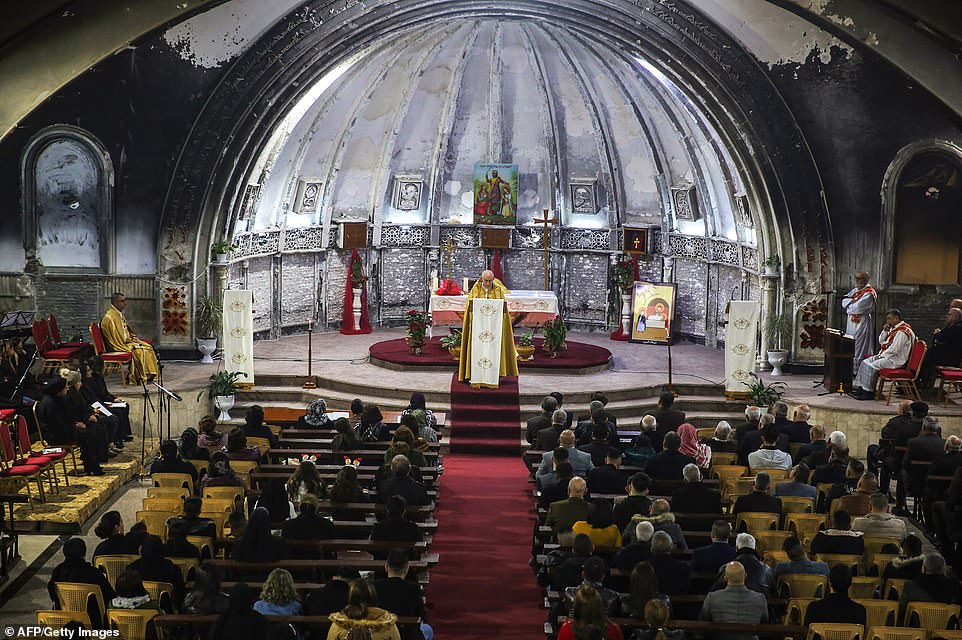 A priest leads worshippers in prayer during the Christmas morning mass at the Mar Behnam and Mart Sarah Syriac Catholic Church, located around 30 miles south of Mosul in Iraq 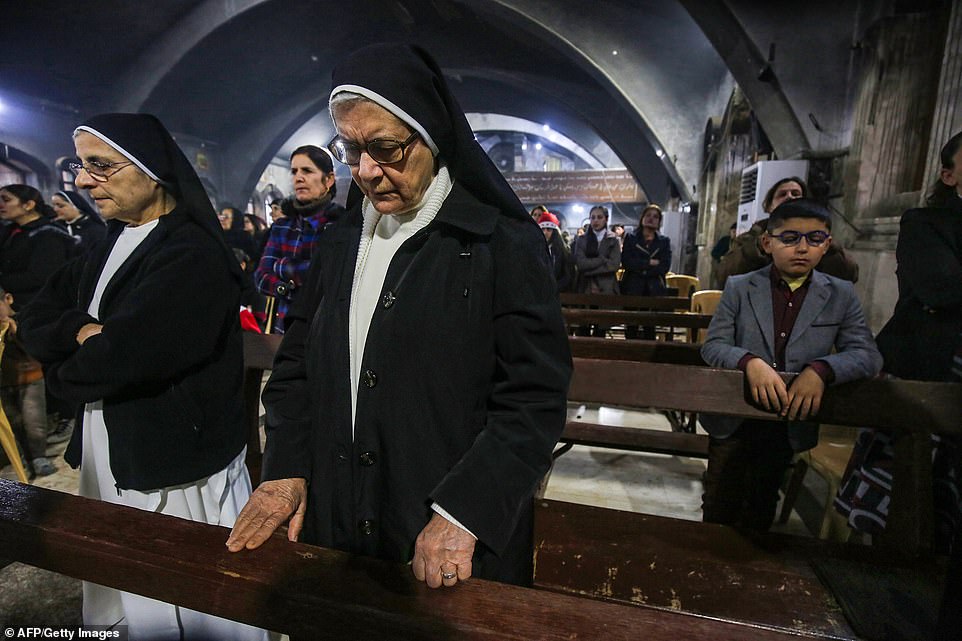 Worshippers pray during Christmas morning services held at a church in the largely Christian town of Qaraqosh, in Iraq 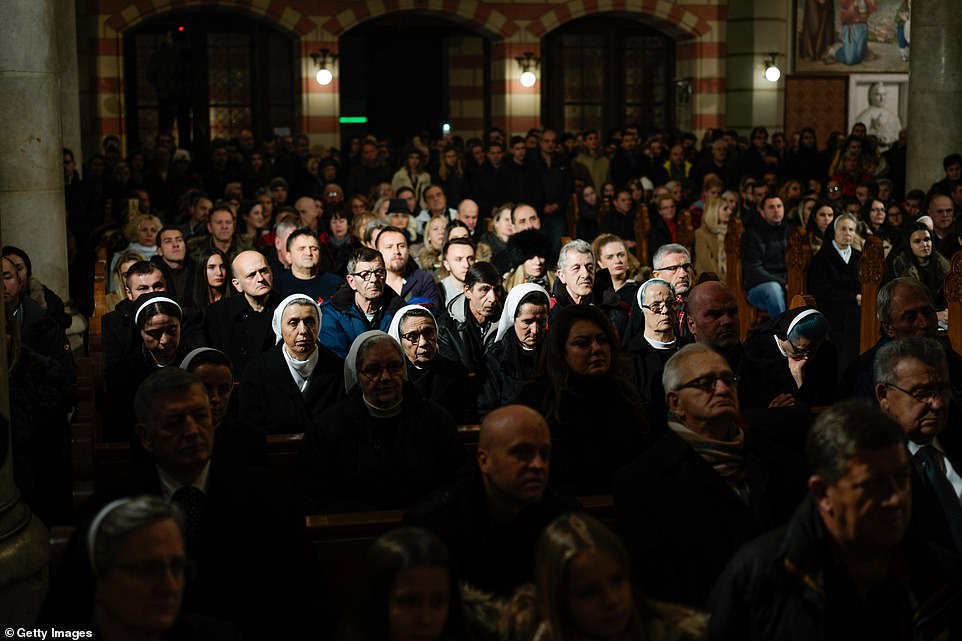 Sacred Heart Cathedral in Sarajevo, Bosnia and Herzegovina, is packed at people attend a midnight Mass on Christmas eve 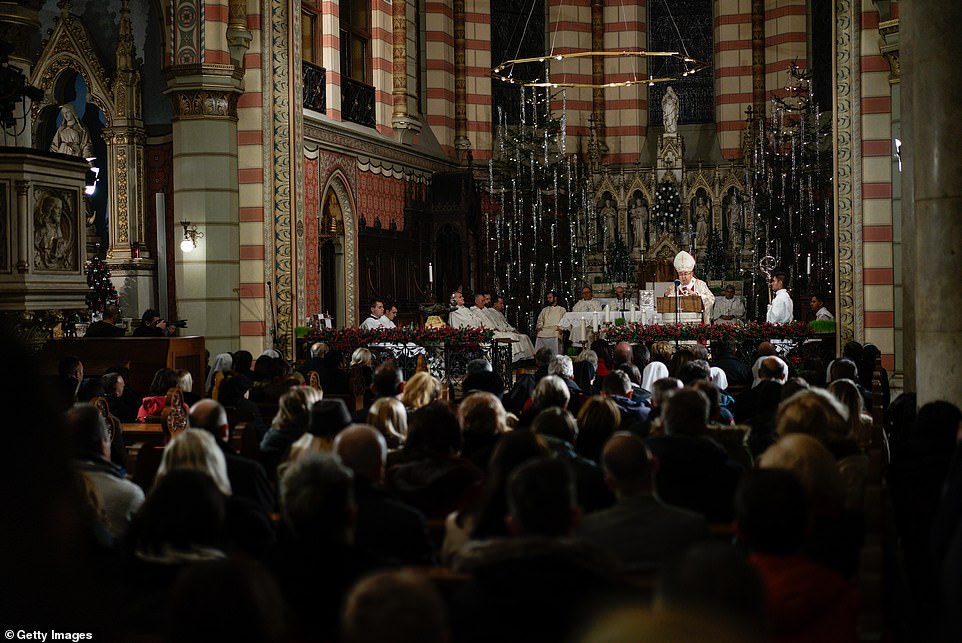 Christians attend a midnight mass on the eve of Christmas at the Sacred Heart Cathedral in Sarajevo, Bosnia and Herzegovina 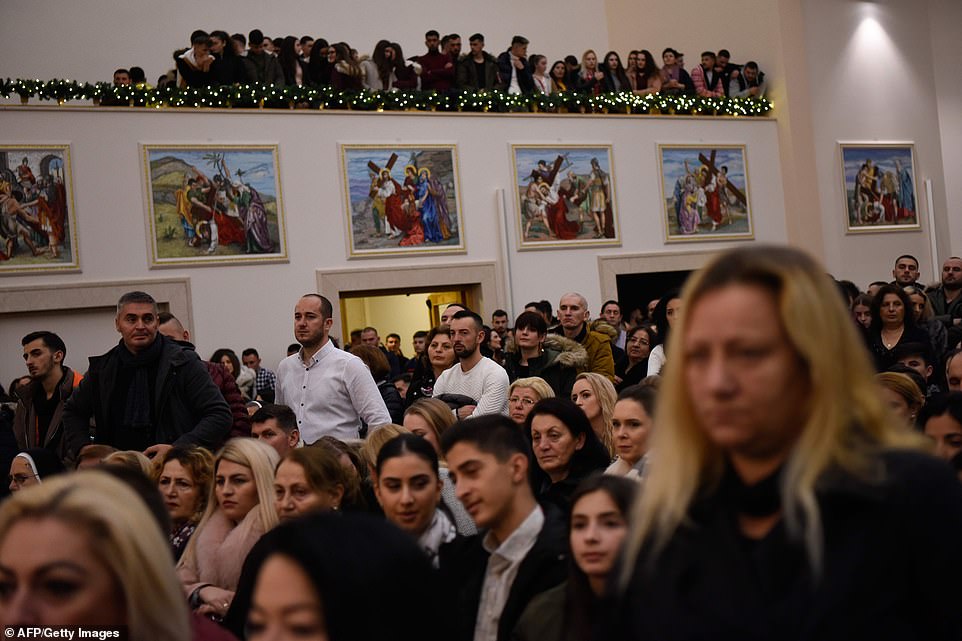 Worshippers attend the Christmas Mass celebrations at a church in the town of Gjakova, Western Kosovo 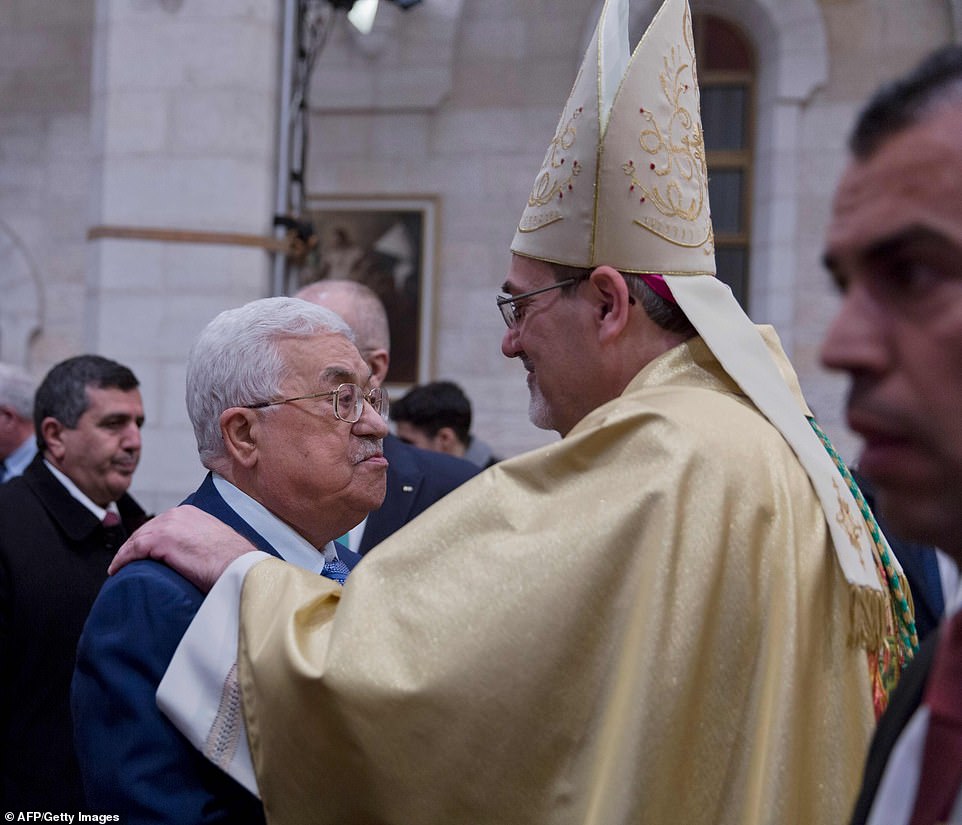 Palestinian President Mahmoud Abbas meets Archbishop Pierbattista Pizzaballa after attending a Christmas midnight mass at Saint Catherine’s Church, in the Church of the Nativity, in Bethlehem

During his homily Monday, Francis lamented that many people find their life’s meaning in possessions when the biblical story of Christ’s birth emphasizes that God appeared to people who were poor when it came to earthly possessions, but faithful.

‘Standing before the manger, we understand that the food of life is not material riches but love, not gluttony but charity, not ostentation but simplicity,’ Francis said, dressed in simple white vestments.

‘An insatiable greed marks all human history, even today, when paradoxically a few dine luxuriantly while all too many go without the daily bread needed to survive,’ he said.

Meanwhile visitors from around the world gathered in Bethlehem in order to queue and see the grotto where it is believed Mary gave birth to Jesus.

Palestinian president Mahmud Abbas was among the dignitaries who attended a service at Saint Catherine’s Church in the Church of the Nativity on Monday evening. 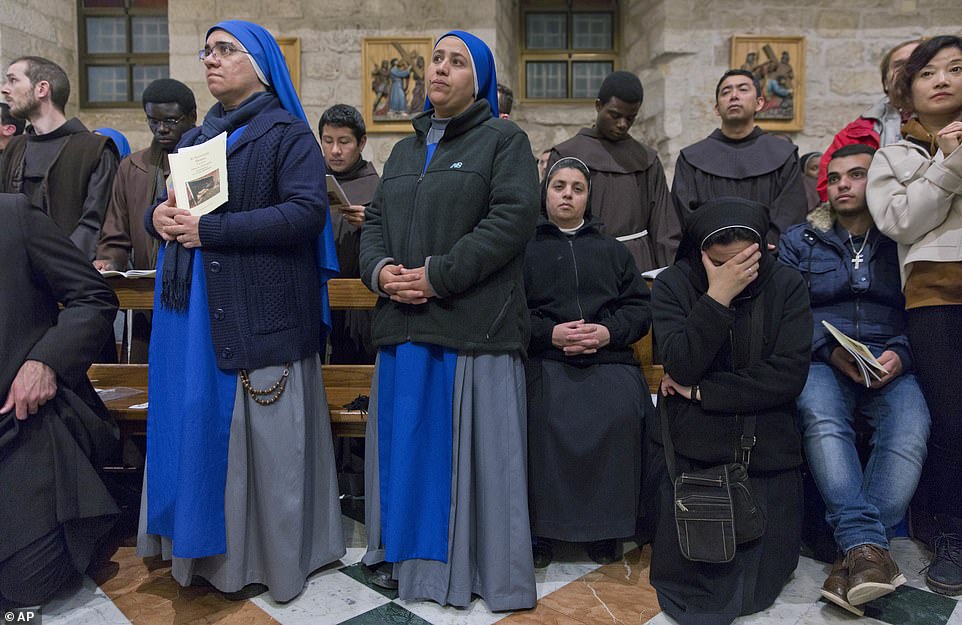 Christian worshipers pray during a Christmas midnight mass at Saint Catherine’s Church, in the Church of the Nativity, traditionally recognized by Christians to be the birthplace of Jesus Christ 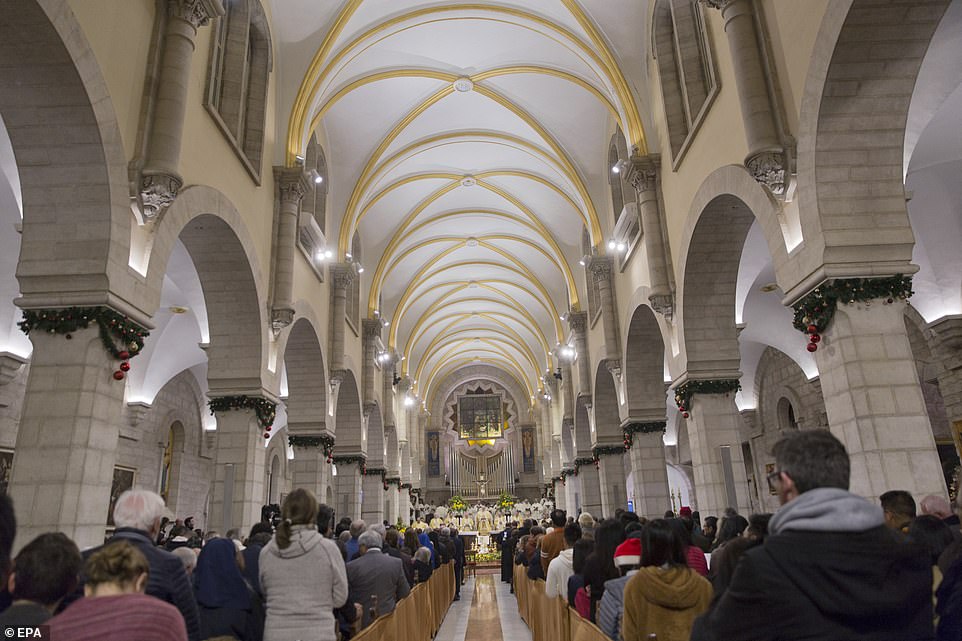 Archbishop Pierbattista Pizzaballa leads a midnight Mass at Saint Catherine’s Church, in the Church of the Nativity 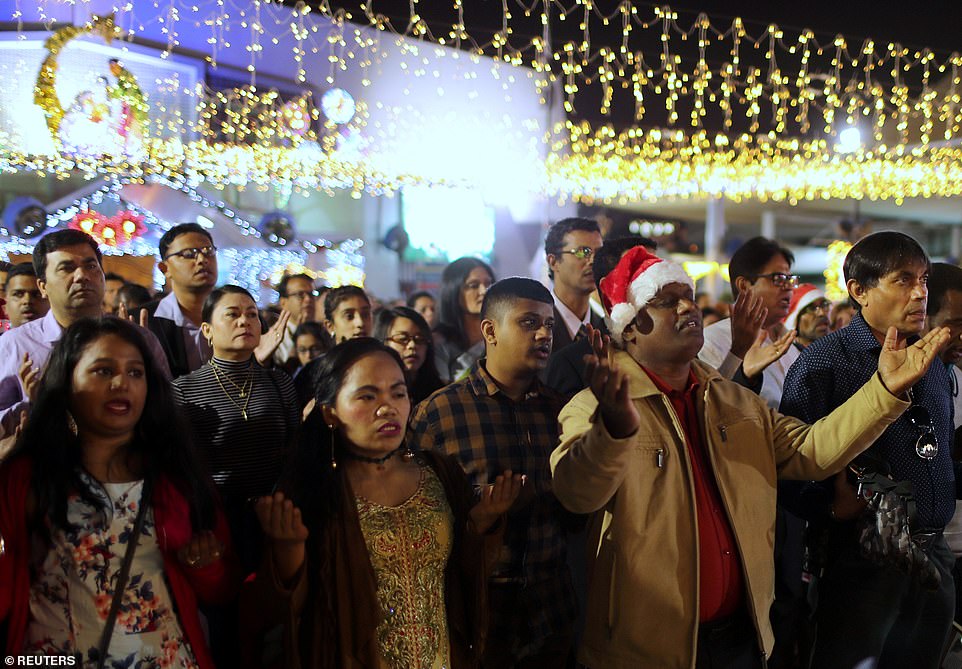 Members of the Christian community attend a mass on Christmas eve at Santa Maria Church in Dubai, United Arab Emirates 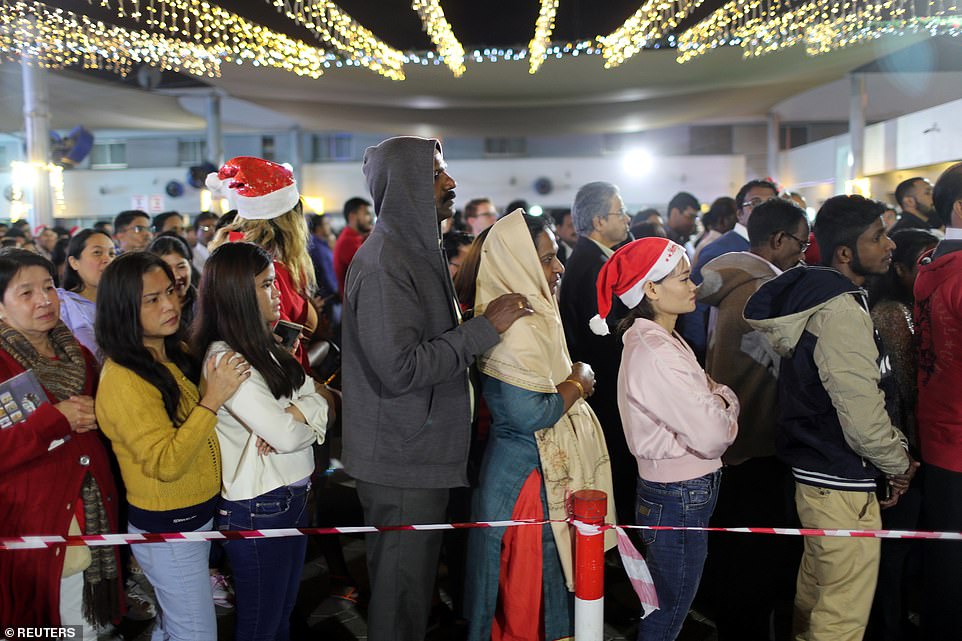 Christians listen as prayer are offered during a service at Santa Maria Church in Dubai, United Arab Emirates 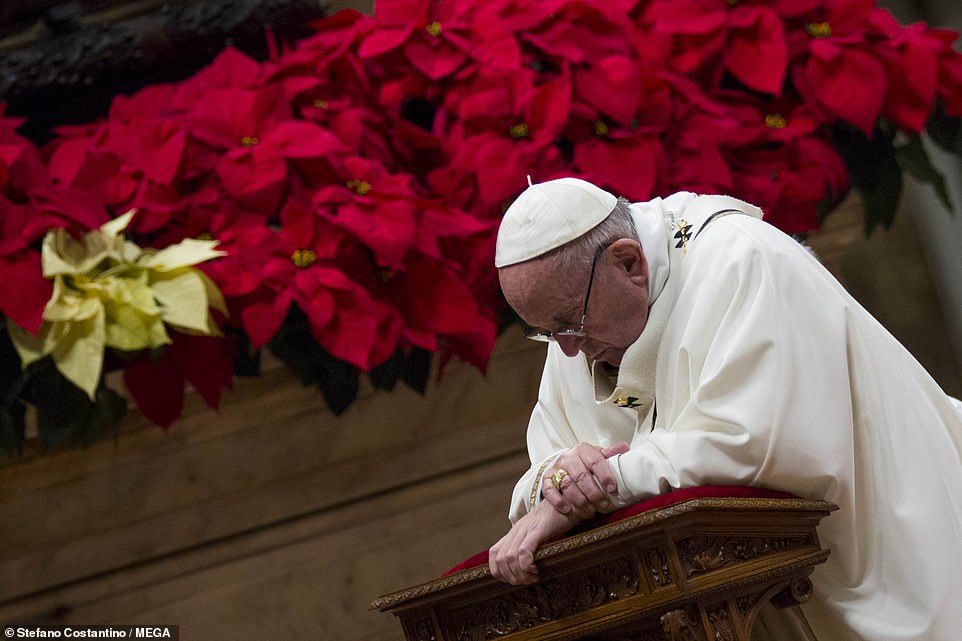 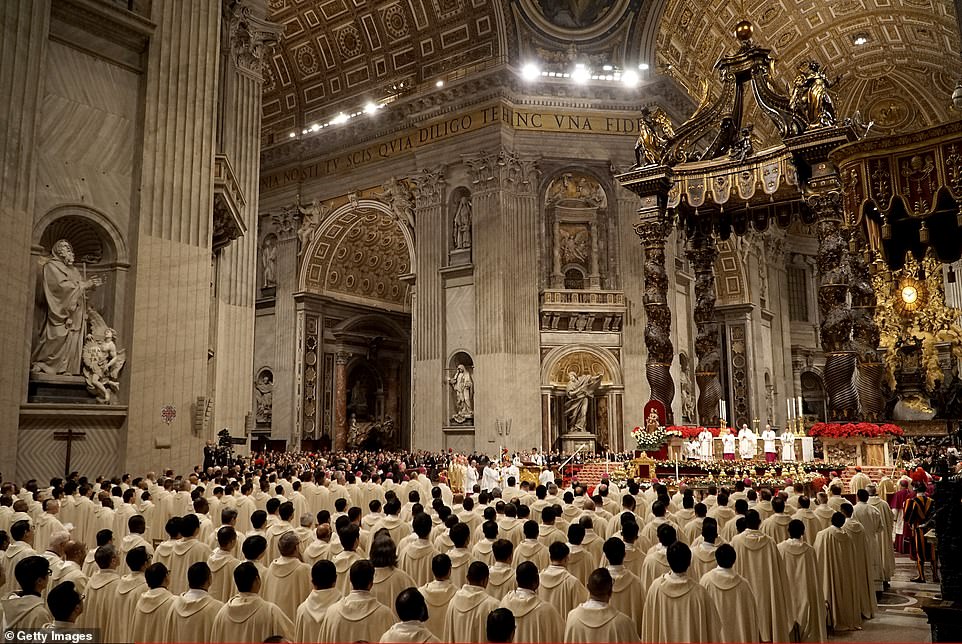 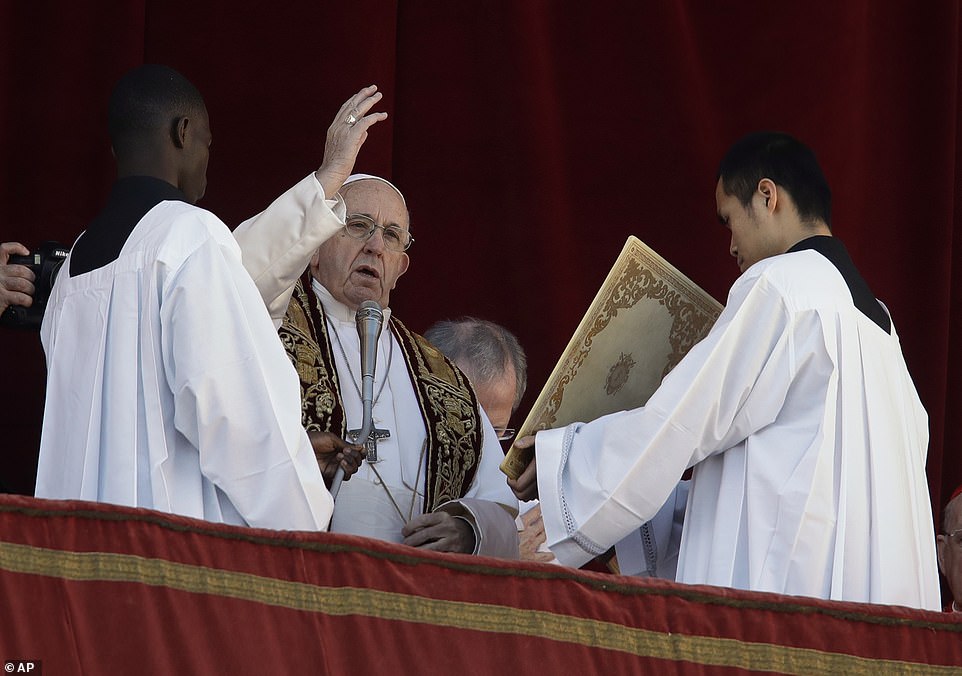 Francis reappeared on Christmas Day to deliver his main blessing from the main balcony of St. Peter’s Basilica 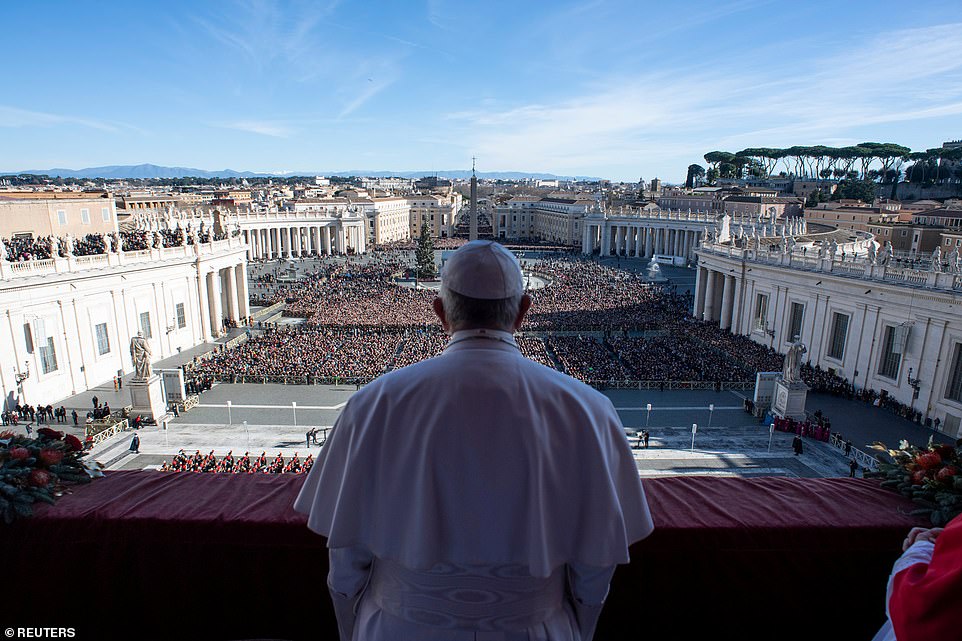 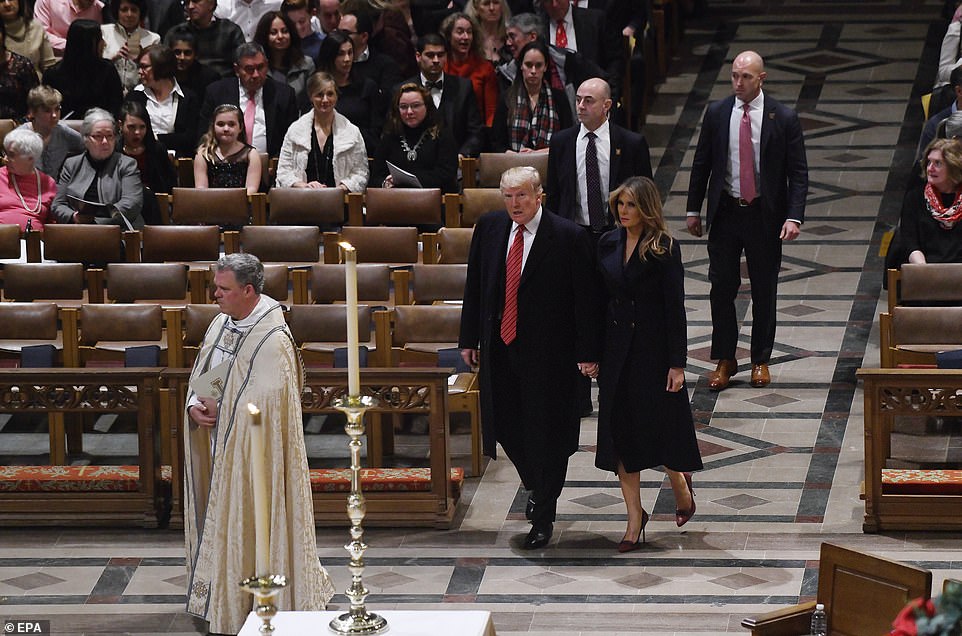 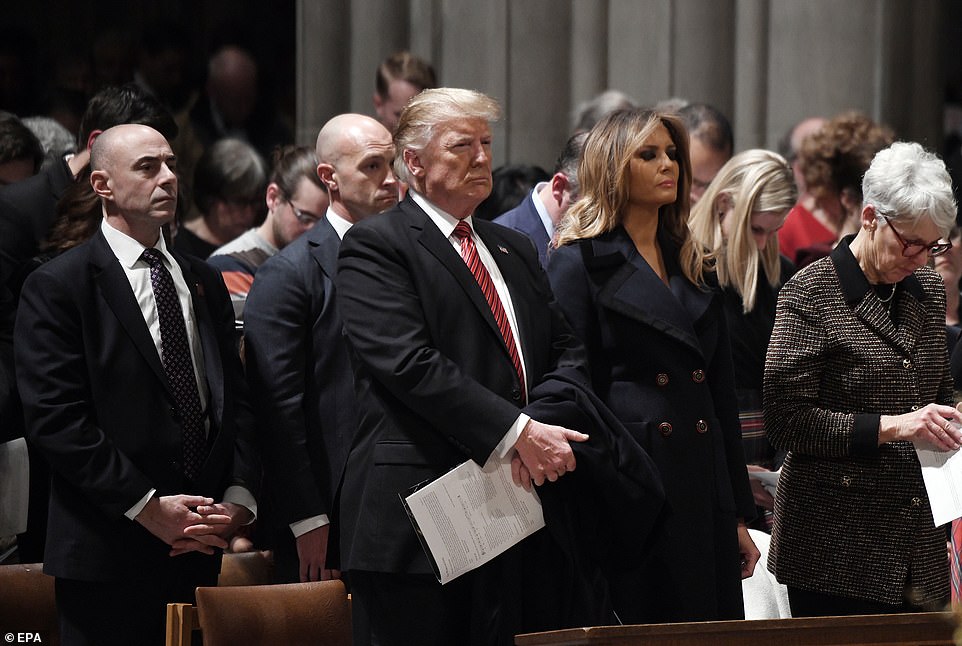 The President had planned to spend Christmas in Florida, but cancelled amid a government shutdown in a row over funding