A fly-in fly-out worker at one of Western Australia’s largest mines is facing rape charges after he allegedly followed her from the village’s pub back to her accommodation.

The 35-year-old from Vasse in the state’s south-west allegedly sexually assaulted the woman in her 20s at the Pilbara BHP mine in November, 2020.

The $4.64billion South Flank mine, which includes the Mulla Mulla village the woman was allegedly raped, is the mining giant’s most diverse production with women making up 40 per cent of the workforce.

The 35-year-old from Vasse in the state’s south-west allegedly sexually assaulted the woman in her 20s at the Pilbara BHP mine in November, 2020

BHP in a statement said they were helping with investigations and that ‘sexual assault or harassment is unacceptable at BHP, full stop’.

‘We are absolutely clear on this, and all employees, contractors and those that come to our sites are made aware of their obligation to support a safe and respectful workplace.’

The mining giant has recently introduced a ‘walk to room service’ scheme where women uncomfortable walking home alone can be escorted either from the site, dining halls or pub.

The $150million Mulla Mulla village where the rape allegedly occurred is the most luxurious BHP has provided for its sites – including a three-storey cafe, cross-fit gym, 2,500 rooms, a swimming pool, sports fields, virtual golf course and a 3,000 book library. 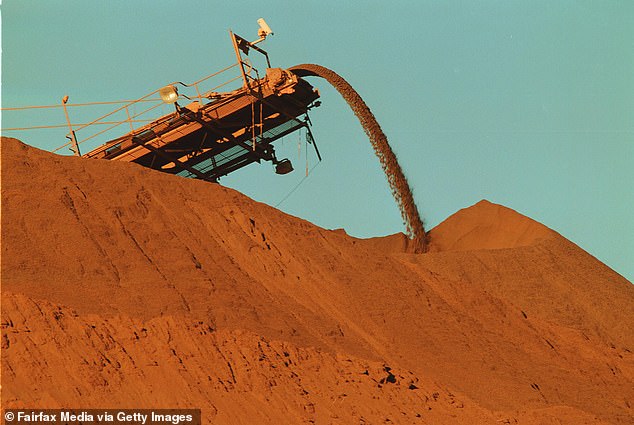 BHP in a statement they were helping investigations and that ‘Sexual assault or harassment is unacceptable at BHP, full stop’

Construction, Forestry, Maritime, Mining and Energy Union state secretary Mick Buchan said the alleged incident was ‘unacceptable’ and slammed the idea of needing an escort to get women home safely.

‘You should not have to rely on a chaperone when you’re living away from home.’

‘Once upon a time when you arrived on a mine site for a new construction job, you were given a donga, a room, and that room remained your room until you left that project… for up to 24 months, even longer,’ he told The West.

‘You developed the community within that block that you lived in, and everyone looked after each other.

‘Nine times out of 10, it’s a different room in a different area. It sort of takes that community feel away from the camp site.’

The man has been charged with two counts of sexual penetration without consent and will face Perth Magistrate’s Court tomorrow.

BHP say they won’t comment on ‘specific incidents’ but are attempting to introduce ‘stricter controls on alcohol consumption’.