House prices in parts of central England have spiked by more than 9 per cent as ‘mini booms’ ride against the otherwise sluggish growth trend.

Northamptonshire, Derbyshire and Norfolk were identified by property website Rightmove as the ‘hottest markets’, with asking prices in these counties surging annually by 9.1 per cent, 7.9 per cent and 7.4 per cent respectively.

This is almost triple the national average, which has seen a 3.1 per cent annual increase in asking prices. Recent predictions from estate agent Countrywide suggest things will stall even further, slowing to 1.5 per cent as inflation eats into household incomes.

House prices in parts of central England have spiked by more than 9 per cent as ‘mini booms’ ride against the otherwise sluggish growth trend (pictured above, a town in Derbyshire)

He continued: ‘With a shortage of suitable choice in many parts of the country, buyers are becoming increasingly adept at hunting down property that fits their budget, ticks the boxes on their checklist and stirs their emotions.

‘Properties in the counties that have seen above-average price rises over the last year are clearly meeting the needs of home hunters at relatively affordable prices.’

Adam Wellesley, director of Horts Estate Agents in Northamptonshire, revealed he has seen an influx of Londoners relocate to the county. 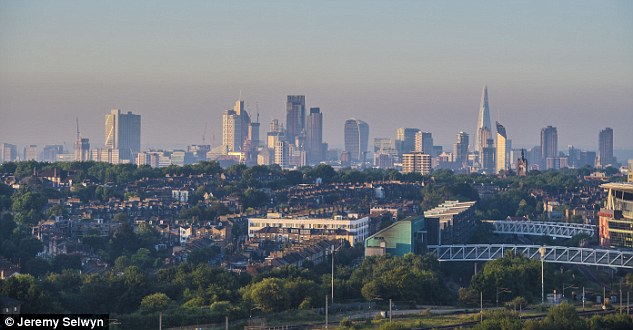 Capital pain: In London, asking prices were up by 1.6 per cent annually – around half the pace of the national average

Explaining what’s behind the uptick, he said: ‘The annual growth running at three times the national average in Northamptonshire is likely to be down to the close vicinity for commuters to get to London Euston, as you can now get there within 48 minutes.’

Looking ahead on the subject of regional variances, Brian Murphy, head of lending for Mortgage Advice Bureau, believes that there is a ‘likelihood is that the market will continue in a similar vein in the coming months’.

Here are the eight counties in central England identified by Rightmove as seeing a mini-boom in asking prices, with the annual increase each enjoyed:

Elsewhere across the country, Rightmove said the best performers in the north of England in terms of annual asking price growth were Merseyside at 5.6 per cent, the East Riding of Yorkshire at 5.4 per cent and Cheshire at 5.3 per cent.

Meanwhile, while the south’s ‘less impressive trend-buckers’ were Kent at 5 per cent, Somerset at 3.8 per cent and and Bristol at 3.6 per cent.

House prices in the south however will tend to be rising from a higher base to start with.

In London, asking prices were up by 1.6 per cent annually – around half the pace of the national average.

Rightmove said the monthly fall is in line with trends usually seen during late summer, when potential buyers and sellers are distracted by holidays.

Mr Shipside concluded: ‘With newly-marketed property seeing a monthly fall of 0.9 per cent and a muted yearly rise of just 3.1 per cent, the heat has come off much of the market.

‘A combination of traditional summertime price blues and the chill of uncertainty in the air has cooled price growth in some parts of the country, and affordability also remains very stretched.’

Countrywide, recently announced that house price growth in the UK is expected to slow to 1.5 per cent.

The figures suggest regionally the North East and Greater London will be the hardest hit.

As Brexit negotiations continue, Countrywide said that confidence will be volatile, having implications for the pace of economic and housing market recovery.

The estate agent added that the outcome of these negotiations is the biggest risk to performance and is weighted to the downside.