Minicab drivers should be subject to tough new restrictions in order to address failings highlighted by child sex exploitation scandals in Rotherham and Rochdale, according to a Government review.

In a report published today said that minicab and taxi drivers should be banned from working outside the area where they are licensed where there have been grooming scandals.

If it is approved the recommendation would close the ‘cross-border’ working loophole that lets drivers work in one particular area even though they are licenced by a council to work elsewhere where there might be poorer safety standards.

The recommendation is set out in an inquiry commissioned by the Department for Transport last summer, The Times reported.

The review is calling for national standards to control licensing in all English councils, which are compulsory CCTV in every cab.

It is also calling for the requirements for drivers to speak and write in English and those who are flouting regulations to be slapped with on-the-spot fines.

The report also recommended new powers are introduced to allow local councils cap the number of minicabs in their area.

If this happens it would enable authorities –  including Transport for London –  to limit the number of minicabs for the first time.

This proposal comes following concerns that apps such as Uber have led to increased congestion in the capital due to more cars being on the road.

The number of taxis and minicabs licensed to operate in England increased by 26 per cent between 2011 and 2017 to a record 281,000, according to figures.

This was spearheaded almost exclusively by minicabs which have to be pre-booked.

Today’s report warned that existing laws governing minicabs and taxis were ‘inconsistent, ineffective and incompatible with the protection of vulnerable people and must not be allowed to continue’.

The inquiry, led by Professor Mohammed Abdel-Haq, an expert in finance at Bolton University.

Some legislation controlling the industry was written in 1847 while the regulation of minicabs outside London was written up in 1976.

Currently, the licensing of cars and individual drivers is devolved to 293 separate councils in England.

The report warned that there was ‘significant variation in both policy and practice’ between areas.

Concerns over the licencing of cars were raised in light of a series of child sexual exploitation scandals across the country, in places such as Rotherham and Rochdale,  in which minicab and taxi drivers were heavily implicated. 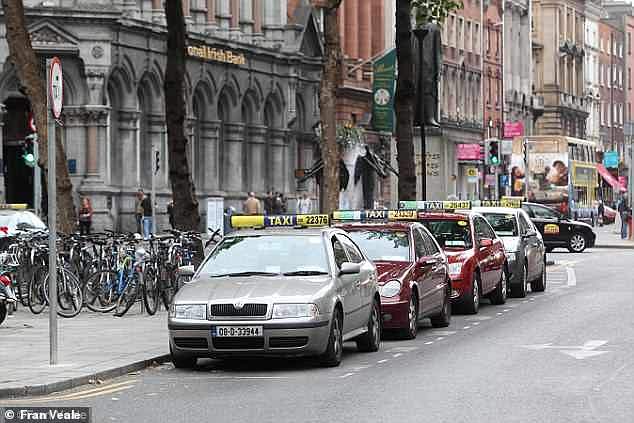 Review is calling for national standards to control licensing in all English councils.  Stock picture

Licensing officers in Rochdale said sexual exploitation  efforts were undermined by the number of drivers working under licences issued by neighbouring Rossendale council.

An investigation by The Times earlier this year found that for at least six months until the summer of 2016 Rossendale renewed scores of taxi licences without knowing drivers’ up-to-date criminal records.

Today’s findings said new national minimum standards should be created that all councils have to follow when issuing licences.

The report said, the government should ‘legislate that all taxi and [private hire vehicle] journeys should start and/or end within the area for which the driver, vehicle and operator are licensed’.

The review called for enhanced criminal record checks to be carried out against drivers every six months and the creation of a new national database of taxi drivers for the first time.

What’s more it asked for all minicabs and taxis to be fitted with CCTV ‘in the interests of passenger safety, particularly in light of events in towns and cities like Rochdale, Oxford, Newcastle and Rotherham,’.

Further measures include forcing all drivers to undertake training in spotting signs of child abuse or exploitation among passengers and requiring all drivers to read and write in English ‘to a standard that is required to fulfil their duties’.

There has not been any response from the government to the report.

A source told The Times that large numbers of the recommendations could be accepted.

The explosion of popular minicab apps such as Uber, which are hugely popular, means that powers to cap minicabs numbers are unlikely.

The government has already resisted calls from the London Mayor to introduce such powers in the capital.