The Government has spent nearly £240 million on public inquiries over the past 13 years without demonstrating it learned from many of them, a damning report says.

The National Audit Office (NAO) found it was ‘not always clear’ whether inquiries had had their intended impact, and that there was no central body monitoring and tracking whether recommendations had been implemented.

Of the 26 inquiries looked at by the NAO – which had made more than 600 recommendations – easily accessible information on the action that had been taken was found for just half.

The report added: ‘For other inquiries, the minister gave general updates to Parliament but did not give specific detail on action taken in response to each recommendation.’

In the case of the 2012 Leveson Inquiry into the ethics and culture of the UK media, ‘no clear response’ was reported to the public with regards to any of its 92 recommendations.

According to the public spending watchdog, a total of 26 inquiries have been concluded since 2005, costing at least £239 million.

This ranged from £24.9 million for the five-year Al-Sweady Inquiry, which investigated accusations of mistreatment of Iraqi prisoners by the British Army, to £200,000 for the Harris Review into self-inflicted deaths in custody of 18 to 24-year-olds.

Legal costs were the biggest outgoing, while the average duration of an inquiry was 40 months.

The NAO criticised the Government for a lack of evidence that they had consistently monitored and scrutinised the cost and progress of inquiries.

It also said ministers had not acted on recommendations for how inquiries should be run, adding: ‘Since 2014, the Cabinet Office and the Ministry of Justice have committed to various actions to improve the efficiency and effectiveness of inquiries originating from two parliamentary select committee reports. 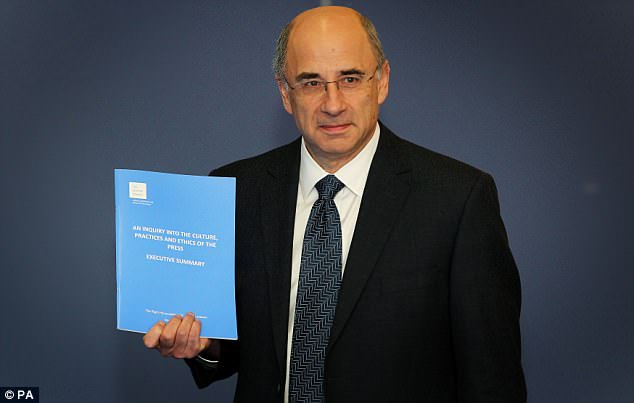 In the case of the 2012 Leveson Inquiry (pictured is Sir Brian Leveson with his report in 2013) into the ethics and culture of the UK media, ‘no clear response’ was reported to the public with regards to any of its 92 recommendations

‘None of these commitments have been fulfilled. For example, they have not acted on recommendations to share best practice from inquiries, or update and publish guidance for inquiry chairs and sponsor departments.’

But it did find that the Home Office had developed its own ‘bespoke processes’ for running inquiries, having instigated six since 2005, which gave inquiry teams more support.

A Government spokesman said: ‘Inquiries are only called to investigate events of significant public concern and play an important role in giving victims closure, establishing where mistakes have been made and ensuring those responsible are held to account.

‘Lessons are learnt from every inquiry, and while each one is unique in its size and length depending on the complexity of the investigation, measures are always put in place to ensure it represents value for money.’