Minnesota girl, 1, thriving after surgery in the WOMB to remove a spinal tumor

A Minnesota toddler is thriving nearly two years after undergoing surgery to remove a tumor from her spine while she was still in her mother’s womb.

When Christie Mendoza was 19 weeks pregnant, doctors found a mass near her daughter Alexa’s tail bone.

Within just a few weeks, it was one-third her size and preventing her from developing properly, reported KARE 11.

Surgeons at Children’s Minnesota’s Midwest Fetal Care Center in Minneapolis discussed all the options with Christie and her husband, including a risky in-utero surgery to remove the tumor.

So, in August, the operation was successfully performed. There were no complications and Christie gave birth at 29 weeks.

Now one year old, Alexa is crawling and climbing like most children her age and learning how to talk and walk. 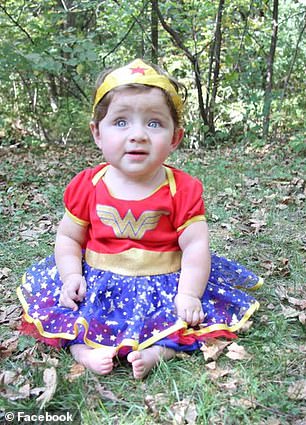 Christie Mendoza, from Bloomington, Minnesota, was 19 weeks pregnant when her daughter, Alexa (left and right), was diagnosed with a spinal tumor. The tumor was one-third her size and preventing her from developing properly 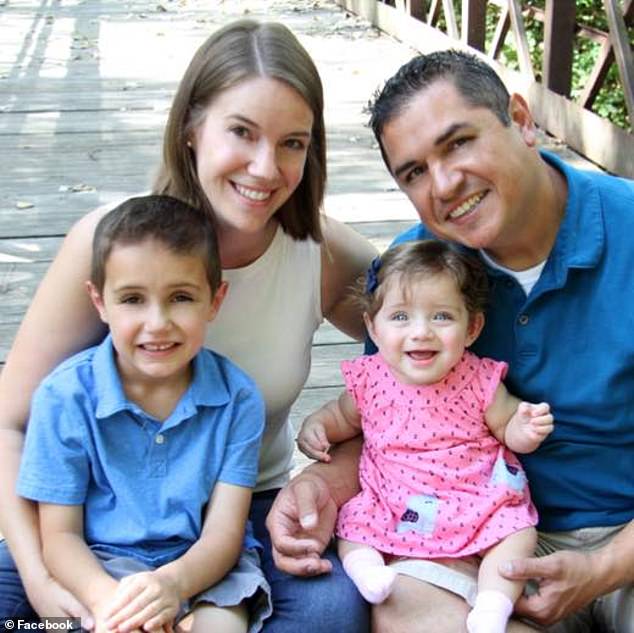 Doctors performed an in-utero surgery, that’s only been done about a dozen times worldwide, on Alexa to remove the tumor. Pictured: Christie and Gus Mendoza, with their children Jackson (left) and Alexa

Christie’s pregnancy with the couple’s first child, Jackson, went smoothly with no complications, so she assumed her second pregnancy would be similar.

Doctors in the Mendozas’ hometown of Bloomington didn’t sense anything was wrong until a routine 19-week ultrasound.

But the ultrasound showed a tumor growing at the base of Alexa’s spine.

It’s not clear what type of tumor Alexa had, but it’s believed to be a sacrococcygeal teratoma, a tumor located at the coccyx, also known as the tail bone.

Doctors don’t know what causes them, but they appear to be benign in most cases.

These tumors occur between one in 35,000 and one in 40,000 live births, according to Michigan Medicine.

The Mendozas were referred to Children’s Minnesota’s Midwest Fetal Care Center, where they met with Dr Joseph Lillegard, a pediatric general and thoracic surgeon.

‘We had a difficult decision to make,’ he told KARE 11.

‘We can accept that this is a very substantial problem that would lead to fetal demise – the loss of Alexa. Or we gave the Mendoza family a chance at a fetal intervention.’ 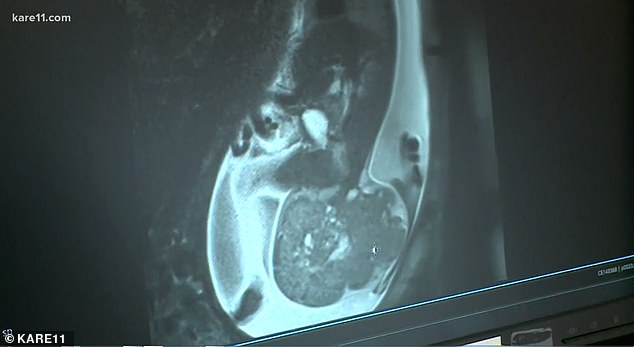 Surgeons begin by making an abdominal incision to expose the uterus. Then the uterus is opened to remove the tumor from the baby’s back. Finally, all three wounds are closed. Pictured: The tumor on Alexa’s spine 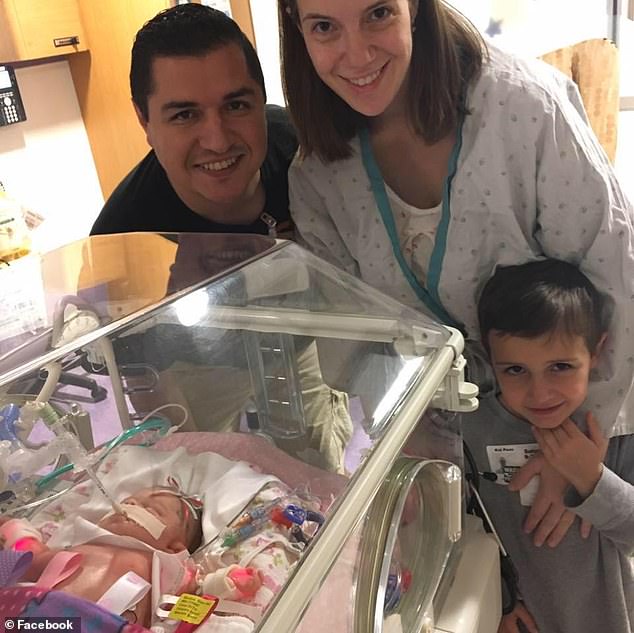 Alexa was delivered at 29 weeks’ gestation in October 2017. Pictured: Gus and Christie with Jackson and Alexa shortly after she was born 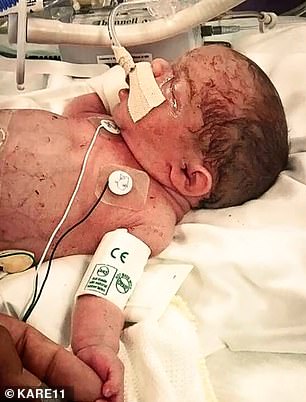 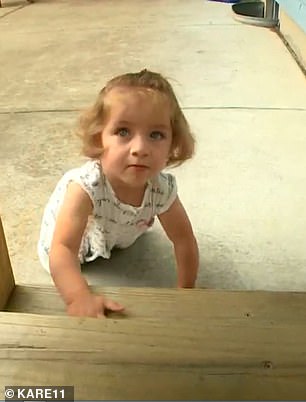 Alexa currently crawls and climbs, and is learning how to walk and talk. Her parents call the day her surgery was performed her ‘second birth’ or ‘sneak peak day’. Pictured: Alexa as a newborn, left, and as a toddler, right

The procedure is risky and, according to Dr Lillegard, has only been performed about a dozen times globally, but the family decided to take that chance.

‘We figured she was in there fighting and we decided to fight with her,’ Alexa’s father, Gus, told KARE 11.

When Christie was 23 weeks pregnant, doctors began the five-hour procedure by making a cesarean section-like incision to expose the uterus.

Then, surgeons open the uterus to remove the tumor from the baby’s back.

Once that’s completed, the wound on the baby’s back is closed, the uterus is closed and the incision on the abdomen is closed.

Baby Alexa grew for five more weeks before she was delivered at 29 weeks’ gestation. Christie said it feels like her daughter was born twice.

‘We did celebrate the one-year anniversary of her fetal surgery as kind of her first entrance into the world,’ she told KARE 11. ‘We call it her “sneak peak day”.’

Alexa had six more surgeries and now she is doing the things most toddlers do including climbing, crawling and learning how to walk and talk.

‘One of the things Dr Lillegard told us was that he was going to do everything he could to make this like [the tumor] never happened,’ Christie said.