Minnesota girl with no arms learns to ride a bike

A five-year-old girl with no arms has defied all odds by learning how to ride a bike.

R.E. Pranke was born with bilateral phocomelia, which is a birth defect that meant she has no arms.

But she hasn’t let this disorder stop her from living a normal life like other children.

While R.E.’s family turned the option of prosthetic arms for now, they asked doctors if they could find a way to let her ride a bike.

Her specialists at Gillette Children’s Specialty Healthcare in St Paul, Minnesota, took on the challenge and created a special device for her.

R.E. Pranke, five, learned how to ride a bike with a device that allowed her to steer with her shoulders. She said she feels like she is flying when she is riding her bike 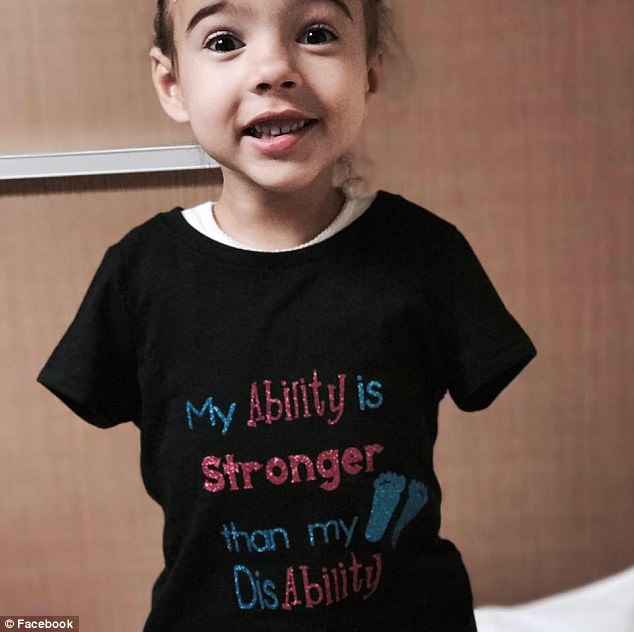 She has bilateral phocomelia, which is a birth defect that causes the shortening or absence of limbs. In her case, she was born with no arms

This isn’t the first time that R.E. has been able to be self-sufficient with her disorder.

Her mother, Karlyn Pranke, told KSTP News that R.E. uses her feet to feed herself, brush her teeth, drink and even color in between the lines.

But this technique would be futile if she wanted to try cycling.

What is bilateral phocomelia?

Bilateral phocomelia is a congenital disorder, or birth defect, that causes the shortening or absence of limbs.

Children can be born without legs or arms.

The most common cause for this disorder is genetic inheritance.

It is a recessive gene, so both parents have to be carriers for it to occur in the child.

If both are carriers, the child has a 25 percent chance of getting the disorder.

Treatment is hard because there is a lack of nerves and bone tissue in the area that is absent.

Surgeons can sometimes reconstruct the area or fit prosthetic limbs to the patient.

Bilateral phocomelia is a birth defect that typically occurs if both parents have the recessive gene for the disorder.

It can cause the shortening or absence of legs or arms in a person.

For some people, the condition can stunt the growth of just one arm. In R.E.’s case. she was born without either.

R.E. could get fitted for prosthetic arms if she wanted to, but her family said she didn’t want them.

‘I wanted to be like other kids,’ R.E. said to KSTP News.

Instead, she asked her specialists to help her ride a bike like everyone else but without needing to use arms.

Her specialists created a device made out of P-V-C pipes and braces.

It wraps around her back and slots into the handle bars of her hot pink and purple bike.

R.E. is then able to steer the bike with her shoulders while keeping it balanced and she said it feels like flying.

Her favorite part about riding a bike is pedaling because of how fast she can make the wheels move.

‘Just the freedom… I mean you should hear her giggle when she is able to do it,’ Kathryn told KSTP.

‘I want people to know that just because she was born without arms, she can do the same things as everyone else.’