A miracle baby who was born 13 weeks early and weighed just 1lb 16oz has returned home to meet her siblings for the first time after spending 82 days in intensive care in three different hospitals.

Forrest Gardiner was born at 26 weeks, two days before lockdown, without toenails or fingernails, with her eyes still fused together and her skin so delicate she had to be kept inside a plastic bag.

Her mother, 22-year-old Abbey Gardiner from Porth, Rhondda, in South Wales, was told she had pre-eclampsia, a condition that causes high blood pressure during pregnancy and after labour, at her 24 week anti-natal appointment at the beginning of March.

Miracle baby Forrest meets her siblings Chadley and Hunnibelle (left) for the first time after returning from hospital after 82 days in intensive care. Pictured with parents Abbey and Keri Gardiner, both 22 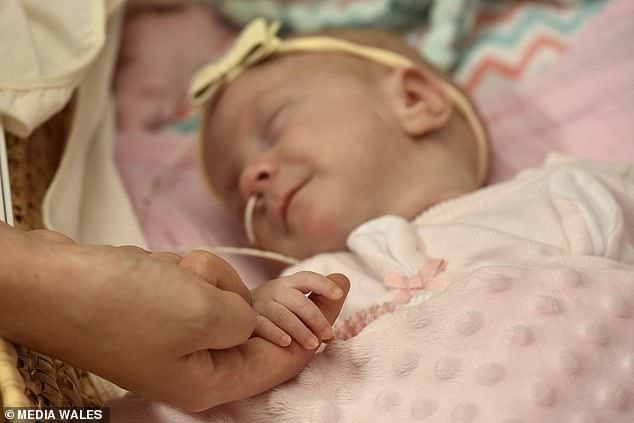 Baby Forrest has had an incredible start in life, surviving being born at 26 weeks and battling a series of medical issues

Despite doctors efforts to see her pregnancy through to 30 weeks she was rushed into theatre at 26 weeks for an emergency c-section as her symptoms began to worsen.

After the operation, the baby was ventilated for nine weeks on and off, her lungs collapsed on four separate occasions and at one time she was pronounced dead in Abbey’s arms before being brought back to life.

Speaking about her 24-week appointment, Abbey said: ‘There was six grams of protein in my urine. They said ‘I don’t know how you are still walking about’ but I felt absolutely fine, that was the scariest part of it.’

Pre-eclampsia affects up to 6% of pregnancies and severe cases develop in about one to 2% of pregnancies, with the only treatment for the condition being to deliver the baby.

‘I was admitted to hospital at 24 weeks then they discharged me but I was seen everyday, then about a week later I was rushed to Singleton Hospital in Swansea.’

However, Abbey’s case became severe and there was a worry she could develop eclampsia, life-threatening fits for mother and baby. 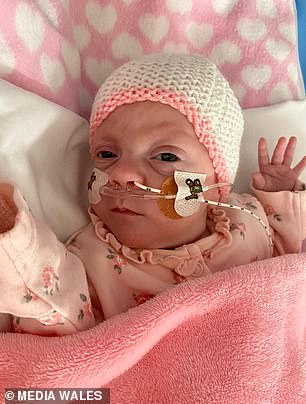 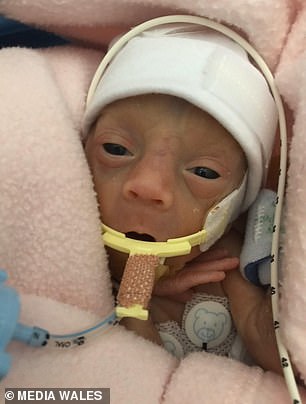 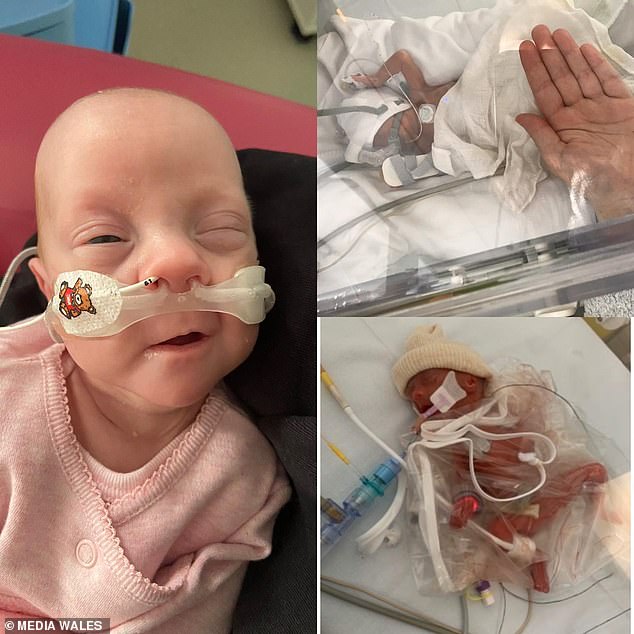 She was due to give birth in Prince Charles Hospital in Merthyr but consultants sent her to Singleton as they have the better facilities to support premature babies.

The day after her admission to Singleton, the mother-of-three became dizzy and started showing signs of eclampsia so she was rushed to theatre.

‘I have had two natural births before and I would give birth 100 times over the c-section.

‘I couldn’t be awake for it as I was dizzy and in and out of consciousness so I woke up not knowing if she had survived. I was so out of it, I didn’t get to see her until 16 hours after.’

Forrest was kept in what Abbey, who is also mother to Chadley Bees, five, and Hunnibelle Gardiner, four, described as a plastic bag to protect her see-through skin, which is designed to replicate the womb.

Her partner Keri Gardiner, 22, was present for Forrest’s birth, and showed Abbey photos of their second daughter together when she first come around.

However, Forrest was born on March 21, which was just two days before the coronavirus lockdown was put in place and restrictions around visiting in hospitals meant that both parents were not allowed to visit the anti-natal ward.

Keri didn’t get to visit his daughter for the first five weeks of her life, which Abbey said had a massive strain on the couple both physically and emotionally. 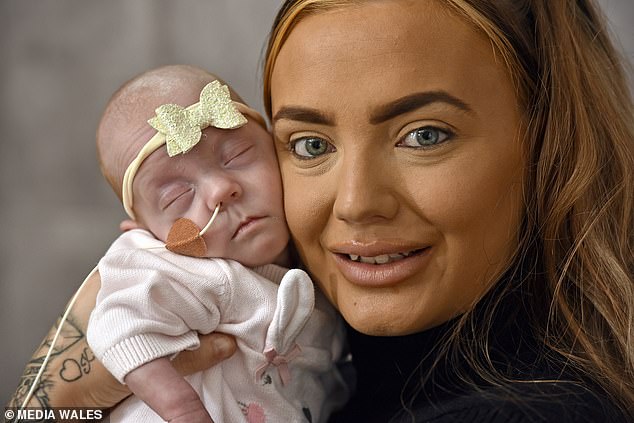 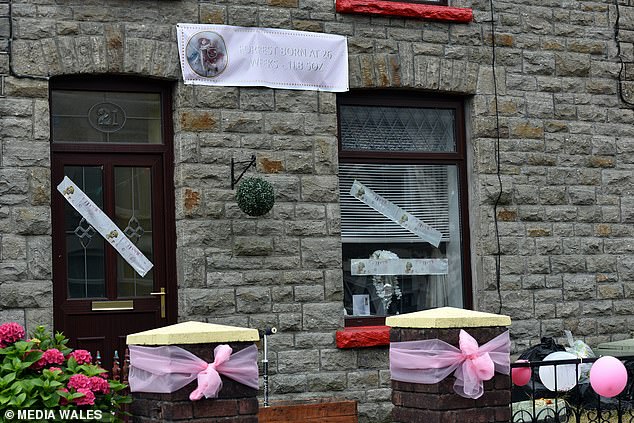 When Keri did finally get to see his daughter again, the hospital was still operating a one parent on the ward at a time which meant Abbey had to wait outside.

‘She was put on his chest for skin to skin and she pulled her oxygen tube out.

‘So the doctors had to do CPR on her and that was the first time Keri got to see her and that happened. It was so traumatic. I was outside crying knowing what was going on but not able to go in.

‘She is four months old and he has only held her once because he is so scared.’

Abbey described the endless amounts of procedures Forrest was put through while in hospital, which she had to go through and take-in without the support of her partner while in the hospital.

On top of this, in the first few weeks where Abbey was travelling to and from Singleton Hospital, she was pulled over by the police on five occassions.

‘They would ask me where I was from and when I would say Rhondda they’d say “What are you doing down here” and I had to explain every time that my baby was in the anti-natal unit.

‘It was fine and they would let me go but it was just an extra stress. In the end the nurses wrote a letter for me to keep in my glove box explaining why I was away from home.’

Complications continued to arise for Forrest and after she had her nine-week immunisations she developed a life threatening condition called nectrotising enterocolitis (NEC).

According to Great Ormond Street Hospital for Children, NEC is a serious illness in which tissues in the gut become inflamed and start to die.

This can lead to a perforation (hole) developing, which allows the contents to leak into the tummy and could cause a dangerous infection. 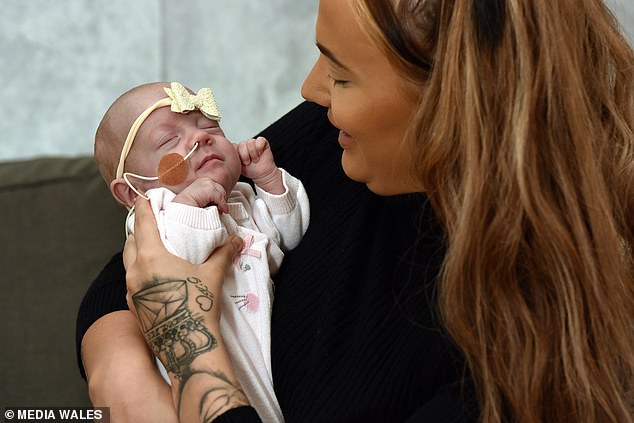 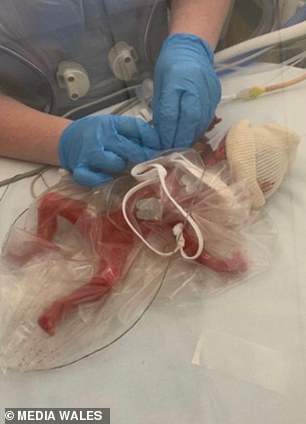 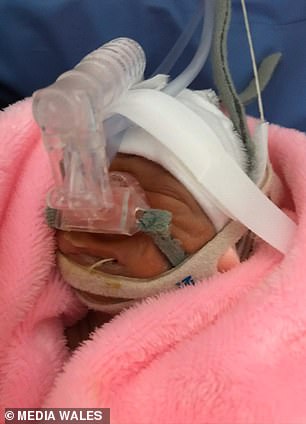 ‘That night she was pronounced dead in my arms for six seconds and then they revived her. There was about 20 doctors rushed over.

‘I remember the doctor saying they don’t think she is going to make it through the night. It was the worst night out of the entire experience.’

At this point, Forrest had already been moved to the Prince Charles Hospital in Merthyr but was blue lighted down to University Hospital of Wales in Cardiff for emergency bowel surgery.

‘The doctors worked so quick, they saved her life, they caught it just in time.’

At the same time, Forrest also caught sepsis and weighed only 3lbs.

‘Even now, four months down the line, it is still hard to believe. It has literally been absolutely horrific, I would not wish this feeling on my worse enemy. The things I have seen they will stay with me for life.

‘On the ward by yourself it is horrendous. Babies die next to you and the mothers are on their own, it is hearbreaking.

‘When we nearly lost Forrest one of the nurses held me. She said I don’t care about this virus I have to hug you and she was crying with me.’

Another condition Forrest has had to deal with is a patent ductus arteriosus, which is like a hole in the heart.

For most babies this closes soon after birth but it is common among premature babies to not resolve itself. 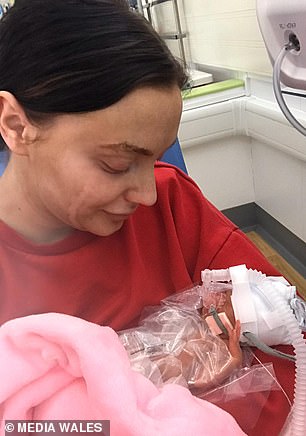 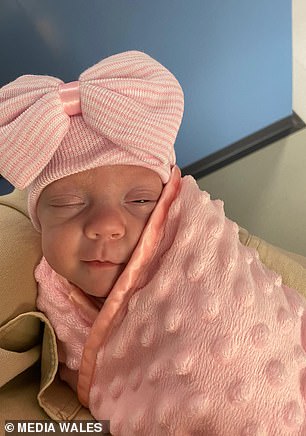 Forrest will need surgery for this in the future, as well as care for her chronic lung disease.

With Forrest being in hospital at the height of the pandemic in April, she was tested for the virus on three separate occasions.

The first being at the end of March when she was just a few days old after a parent on the ward tested positive. Abbey said those affected were subsequently isolated from the rest.

‘To be told she had to be tested for coronavirus was horrific. We all weren’t allowed to hold our babies or touch their skin without gloves on.’

Abbey said going through this during lockdown definitely made things harder, as not only was she able to seek comfort when at home from friends and family but other services she was expecting to have were no longer there.

‘When we found out I had pre-eclampsia, me and Keri had counselling together.

‘They spoke to us about what to expect, what services would be available for us afterwards, obviously having a premature baby is extremely hard.

‘But after I gave birth, I found there was nothing there for me. I was in the hospital for two days before I went home. When I got home I cried and I cried.

‘Swansea is a fair bit away from where we live. It was awful leaving the hospital without my baby and with her being an hour away with strangers looking after her.

‘I could have stayed in longer but Keri was out of work and I have two other children at home that I wanted to get back to aswell. 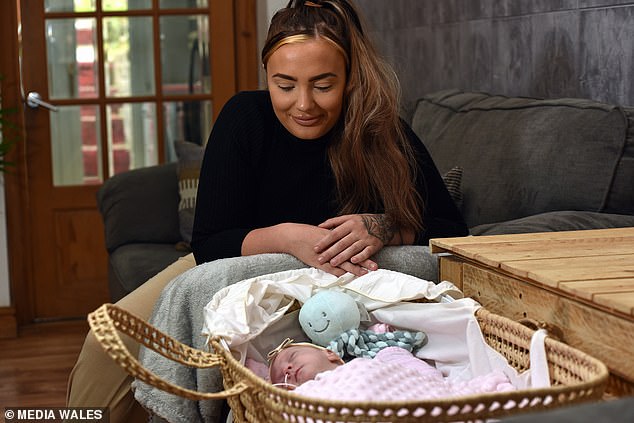 ‘Travelling to Swansea was costing at least £15 in fuel every day.’

As well as this, Abbey said her personal aftercare almost completely disappeared.

She had no health visitor or midwife check to see how she was doing while going through an emotionally stressful time.

Abbey also had post-natal depression when she had her first child Chadley but has received next to no support medically following the birth.

‘Forrest’s nurses weren’t there to help me but they did more than anyone else did.

‘I have had to just go along as it is not me that is fighting for my life it is her.’

One example of how coronavirus complicated services was a phone call Abbey received before Forrest’s nine-week immunisations. Her GP surgery called her to request she wear a mask when bringing Forrest in.

She had to explain that Forrest was born prematurely and was therefore still in hospital.

But baby Forrest finally returned home on Thursday evening, and her brother and sister were ecstatic to finally meet her.

‘She was only three and a half months old when she came off her breathing tubes last month but really she should have been a week old.

Abbey and Keri picked Forrest up on Thursday evening and introduced her to her big brother and sister.

‘They were a bit apprehensive at first, they didn’t know what to think, I don’t think they actually believed me when I said she was coming home,’ said Abbey.

The family are over the moon to finally be home together after a long and hard four months.