New parents are being warned to be mindful of ‘misleading’ marketing tactics used by baby food makers. Experts say promotional material on the packaging of products is confusing parents and fuelling childhood obesity.

The wording is largely unregulated and often implies some indirect health benefit, known as the ‘healthy halo effect’.

Some products described as having ‘vegetable tastes’ can actually contain a higher proportion of fruit which are naturally more sugary. Wording like ‘no added sugar’ could also lead parents to wrongly believe that items are completely free from sugar, it is feared.

It comes as the baby food market in the UK booms, growing 2.5 percent a year, with the market predicted to reach £1billion by 2024.

But experts say the absence of any legally binding regulations for the composition and promotion of manufactured baby foods means the market is ‘something of a free-for-all’.

The survey, published in the Archives of Disease in Childhood, revealed baby food products sold in the UK had a total of 6,265 promotional claims, with an average of nine per product. Some carried up to 17. 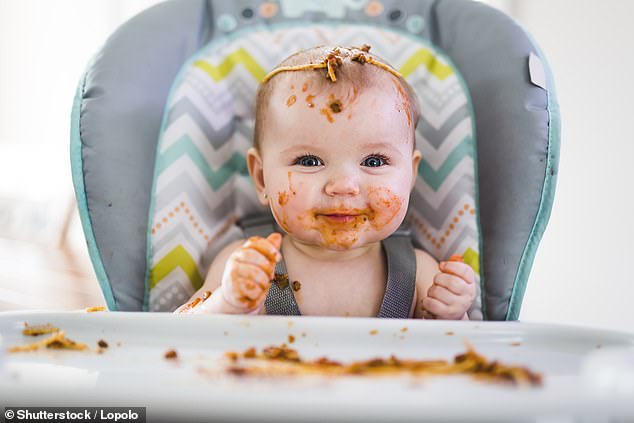 A survey of baby foods sold in the UK found a number of concerning trends on how they are promoted, leading the authors to say new parents face a free-for-all

When to start? Introducing your baby to solid foods, sometimes called complementary feeding or weaning, should start when your baby is around six months old.

In the beginning, how much your baby eats is less important than getting them used to the idea of eating.

They’ll still be getting most of their energy and nutrients from breast milk or first infant formula.

If your baby was born prematurely, ask your health visitor or GP for advice on when to start introducing solid foods.

How to start? In the beginning, your baby will only need a small amount of food before their usual milk feed.

Do not worry about how much they eat. The most important thing is getting them used to new tastes and textures, and learning how to move solid foods around their mouths and how to swallow them.

They’ll still be getting most of their energy and nutrients from breast milk or infant formula.

There are some foods to avoid giving to your baby. For example, do not add sugar or salt (including stock cubes and gravy) to your baby’s food or cooking water.

Babies should not eat salty foods as it’s not good for their kidneys, and sugar can cause tooth decay.

What is baby-led weaning? Baby-led weaning means giving your baby only finger foods and letting them feed themselves from the start instead of feeding them puréed or mashed food on a spoon.

Some parents prefer baby-led weaning to spoon-feeding, while others do a combination of both.

There’s no right or wrong way. The most important thing is that your baby eats a wide variety of food and gets all the nutrients they need.

There’s no more risk of choking when a baby feeds themselves than when they’re fed with a spoon.

Baby-led-weaning claims, where babies are given food to eat themselves rather than spoon-feeding, were found on 72 percent of baby snacks, like food bars, something the authors said was ‘questionable’.

The researchers said the promotion of snacking habits as a way to help babies eat for themselves had the potential to encourage overeating and obesity later in life.

As a whole, they argued the widespread use of unregulated claims on manufactured baby foods was of concern. They specifically highlighted the use of the term ‘vegetable taste’ on some products which in reality were composed of a combination of fruit and vegetables with a predominantly sweet taste.

The lead author of the study, Dr. Ada Garcia, said influencing eating preferences in early life could have long-term consequences for babies’ health. ‘Since food preferences are formed early in life and infants have an innate preference for sweet and salty foods, promoting sweet baby foods containing a high amount of sugar could be detrimental,’ she said.

She said that findings indicate more should be done to regulate the claims made on the packaging which could be misleading parents who are vulnerable to such suggestions as they seek to give their baby a good start in life.

‘Promotional claims on packaging are extensively used which could mislead parents’, she said.

‘The unrestricted use of messages and health halo statements on the packaging of calls for policymakers and stakeholders to update guidelines, legislation, and policies to protect this vulnerable demographic so that infant feeding recommendations are not undermined.’

The Government is planning new restrictions on the advertising of junk foods from April this year in an attempt to tackle childhood obesity. Part of these measures includes banning junk food advertisements online and before 9 pm on TV.

Obesity is a growing problem, in both the UK and the US up to a third of youngsters are considered overweight.

You can also find more baby nourishing tips in this article from Serenity Kids.