The winner of a neo-Nazi online beauty pageant was among those arrested yesterday when Italian authorities seized a huge stash of weapons and far-right memorabilia from 19 homes across the country.

Francesca Rizzi, 26, who won the 2018 Miss Hitler competition, is being investigated by authorities for plotting to form a neo-Nazi party called the National Italian Socialist Workers’ Party.

The 26-year-old woman, who is from Milan, was among 19 people arrested during an operation by Italian officers called ‘Black Shadows’.

Francesca Rizzi, 26, pictured, who won the 2018 Miss Hitler competition, is being investigated by authorities for plotting to form a neo-Nazi party called the National Italian Socialist Workers’ Party 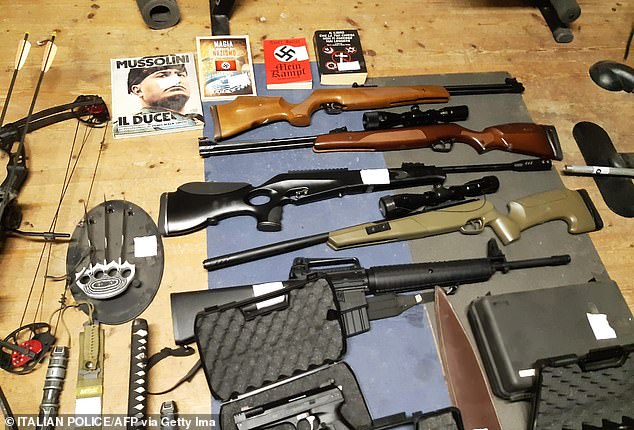 Seized: A stash of automatic weapons, rifles and Nazi paraphernalia which was seized by Italian police in raids of 19 homes across the country

She won the online fascist beauty pageant in 2018 under the name Miss Eva Braun, and her upper back is covered with a tattoo of the Reichsadler – a Nazi emblem with an eagle atop a swastika.

During the nationwide raid, police seized an arsenal of swords, knives, crossbows, hunting rifles and automatic weapons from 19 homes.

Rizzi’s co-accused include a middle-aged female civil servant called Antonella Pavia who refers to herself as ‘Hitler’s Sergeant Major’.

Another suspect, allegedly in charge of training recruits, was linked to the Calabrian ‘Ndrangheta mafia.

Nazi flags and books about Adolf Hitler and Benito Mussolini were also seized in the raids which took place in 16 towns and cities from Milan to Sicily. 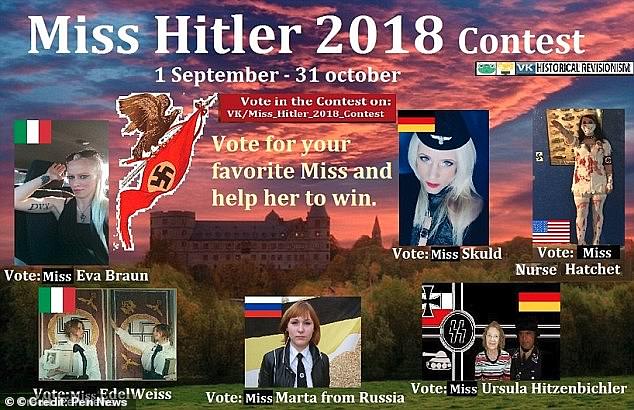 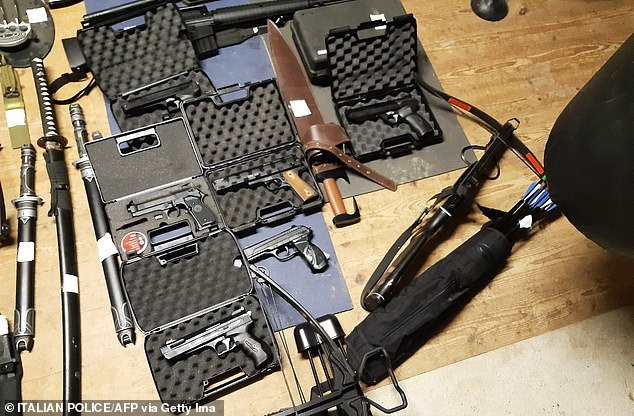 Armed: Police seized this stash of weapons from a group they said were plotting to create a new neo-Nazi party with a name similar to Hitler’s NSDAP 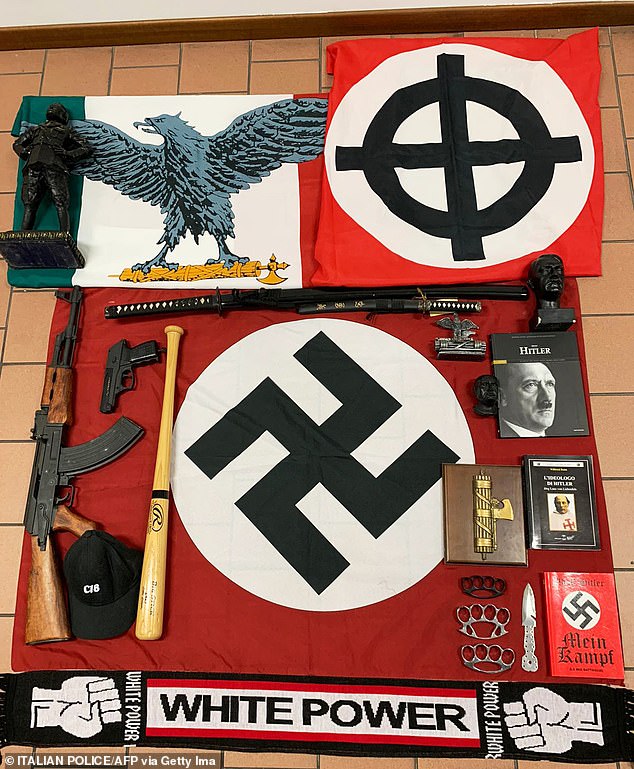 The collection of items found at the 19 homes included flags with Nazi swastikas, a copy of Hitler’s book Mein Kampf and a scarf emblazoned with a White Power slogan

The fledgling party had an openly anti-Semitic and xenophobic programme and had been in contact with other far-right groups in Europe including Britain’s neo-Nazi movement Combat 18, it is believed.

Combat 18 draws its name from Adolf Hitler’s initials, which are the first and eighth letters of the alphabet.

The extremists had also been trying to recruit people on social media and had a group chat called ‘Militia’ to keep in contact. 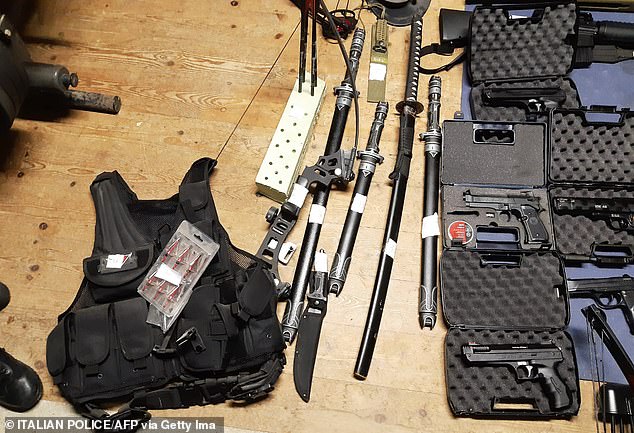 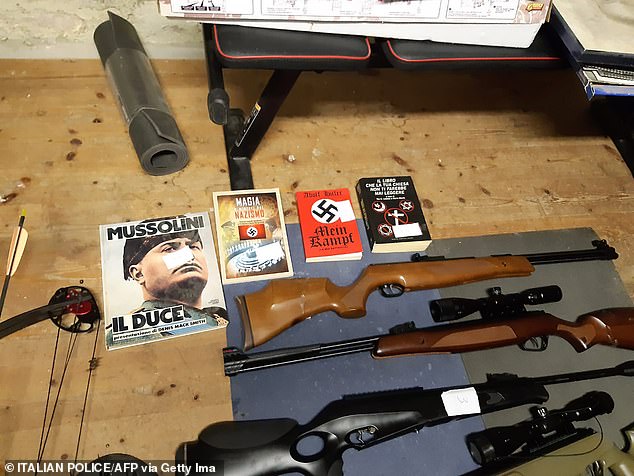 In addition, the head trainer was a member of the powerful Calabrian mafia ‘Ndrangheta, police said.

He had collaborated with police on previous investigations and was a local leader of the small, far-right Forza Nuova party, authorities say.

Italy’s state police said it had been monitoring ‘extreme right-wing local groups all united by the same ideological fanaticism’. The items seized included a copy of Hitler’s book Mein Kampf.

The right-wing activists were under investigation for belonging to a ‘subversive association’ and ‘incitement to commit a crime’, police said. 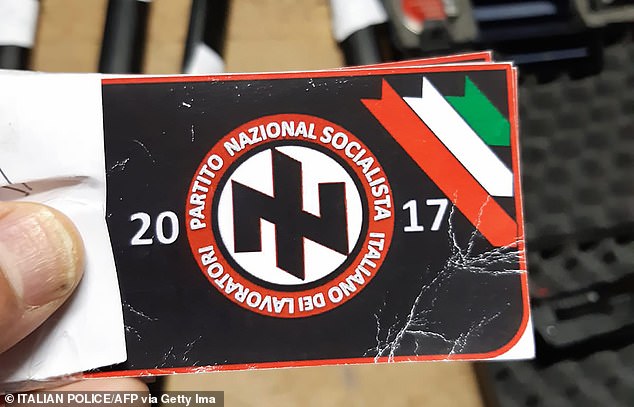 Italian police said the suspects had been plotting to form a neo-Nazi party called the National Italian Socialist Workers’ Party, a name similar to Hitler’s NSDAP 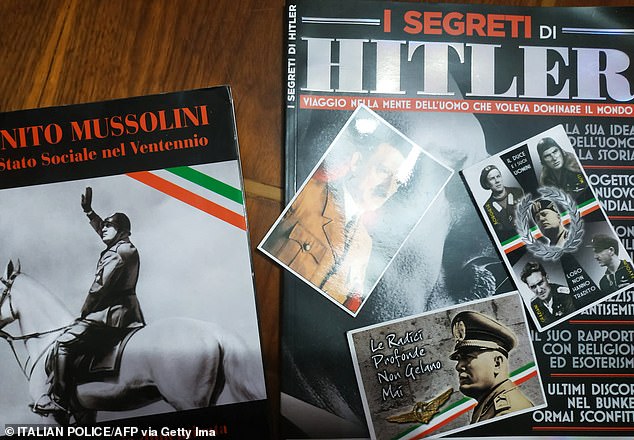 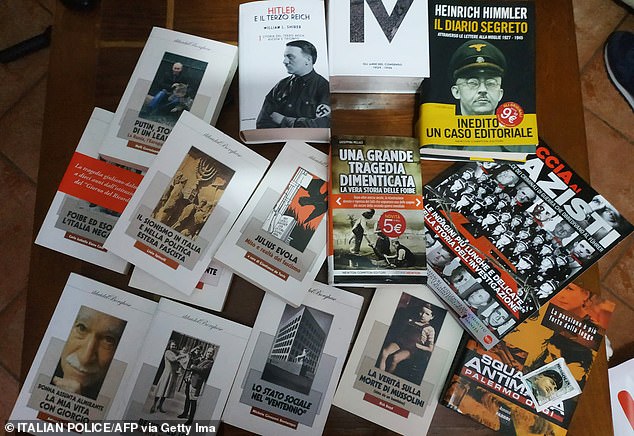 Police did not say how many people were arrested. ‘Defence of fascism’ and efforts to revive fascist parties are crimes in Italy.

‘Some suspects had a vast amount of weapons and explosives at their disposal,’ a statement said.

‘The various accused had defined an internal and territorial structure of the movement, created the symbol and drafted the openly anti-Semitic programme.

‘[They] conducted recruitment and proselytizing activity by publishing content of the same content on their social accounts.

‘During the operation, weapons were found and propaganda material was seized.’