A patient reported missing from a London hospital was found dead on the roof three days later.

The alarm was raised after the man, in his 20s, disappeared from a ward at St George’s Hospital in Tooting.

His body was eventually found three days later by a member of staff. It is unknown how the victim gained access to the roof.

The death came as the hospital, which is where Channel 4 documentary 24 Hours in A&E is shot, underwent construction following a report by the NHS watchdog that warned some buildings were not up to scratch, reports the Evening Standard.

Police were called immediately after the discovery at 7.45am on August 1 and and the hospital has launched an investigation after a post-mortem found the man died of multiple injuries consistent with a fall.

A damning inspection by the Care Quality Commission (CQC) in November 2016 found the hospital required improvement in several areas, and it was told it needed to improve on patient safety.

It also found that ‘several areas of the hospital’s estate that was in a state of disrepair. There was water ingress during heavy rain to several clinical areas we visited.’

They also raised concerns about water leaks near electrical cables. 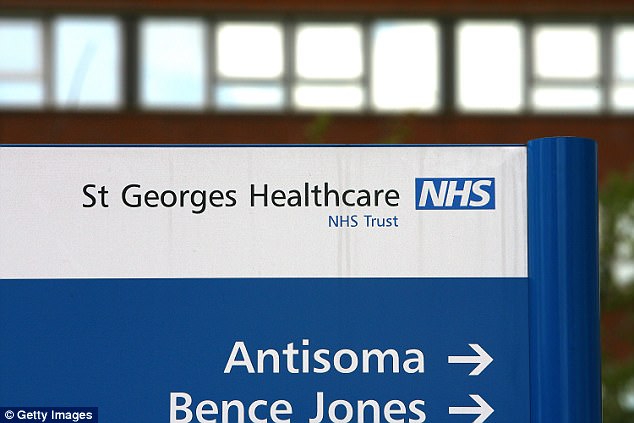 An investigation has been launched after the man, in his 20s, was found dead three days after disappearing from a ward

A spokesman for the Met Police said: ‘Police were called at 7.45am on Tuesday, 1 August to St George’s Hospital grounds in Tooting following reports of a man, aged in his 20s, found deceased.

‘Next of kin have been informed. A post-mortem has been carried out and gave cause of death as multiple injuries consistent with a fall.

‘The death is not being treated as suspicious. A report will be compiled for the coroner’

A spokesman for the hospital said: ‘We can confirm that police were called to St George’s Hospital (Tooting) on Tuesday, 1 August after a man was found deceased on hospital grounds.

‘We are carrying out an investigation, so are unable to comment further at this stage.’