A missing pregnant teenager was found dead with her baby cut from her womb after she was lured to the Chicago home of a woman who offered to give her free children’s clothes.

Marlen Ochoa-Uriostegui, 19, was found strangled to death inside a trash can in the woman’s yard on Wednesday. She had been nine months pregnant.

Authorities discovered that her unborn son, who is still alive, had been ‘forcibly removed’ from her body after the murder.

Hours after Ochoa-Uriostegui disappeared, a woman called 911 claiming she had given birth to a boy at the home and was suffering ‘post-delivery issues’.

The boy was admitted to the hospital in ‘grave’ condition and remains on life support. Three persons of interest have been taken into custody for questioning.

Marlen Ochoa-Uriostegui went missing after visiting a home in Chicago to pick up baby clothes for for unborn son, her family said

An anonymous tip led detectives to check the DNA of the baby after the woman set up a GoFundMe page to raise $9,000 for the baby’s funeral, claiming the boy was sick and about to die.

Results showed that the baby, who has been in the hospital for nearly a month, was Ochoa-Uriostegui’s child. 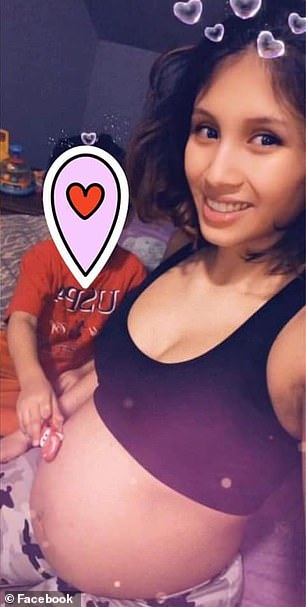 Marlen Ochoa-Uriostegui was nine months pregnant when she was murdered

The disturbing story follows the same pattern as a number of fetal abduction cases in the US.

Her family said she then went to a home on Chicago’s Southwest Side after a woman on Facebook said she had a stroller and baby clothes she wanted to give away, according to the Chicago Tribune.

Ochoa-Uriostegui reportedly met the 46-year-old woman on a Facebook group called ‘Help a Sister Out’.

The woman claimed she was pregnant as well and offered to give the teen a few items for free.

On the night the teen disappeared, a 46-year-old woman from the same Southwest Side home called 911 and said she had just given birth and the baby wasn’t breathing.

The woman told the dispatcher that the baby was ‘pale and blue’ and that she was doing CPR.

A neighbor saw the woman standing outside her front door with the baby, who was wrapped in a white sheet.

She noticed blood stains on the woman’s hands and on her T-shirt, but none on her shorts.

‘I said, “What’s up?’ and she said, “I just had the baby. It’s not breathing,”‘ the neighbor, who did not want to be identified, told the Chicago Sun-Times. ‘She said, “I stood up and the baby came out.”‘

The neighbor said the paramedics never went inside the house.

‘Before she left in an ambulance, she told me several times, “Please call up someone to come and lock the house,”‘ the neighbor added, revealing that the woman was living in her parents’ basement.

Ochoa-Uriostegui was reported missing that same day after she didn’t pick up her three-year-old son from daycare.

Her body was discovered after police took the 46-year-old woman, as well as her boyfriend and he daughter, into custody for questioning.

An autopsy revealed that the teen died from ‘ligature strangulation’. Her death has been ruled a homicide.

‘We believe all of them played some role in this unspeakable act of violence,’ said Chicago police spokesman Anthony Guglielmi said of the three persons of interest.

Charges have yet to be filed as of Thursday morning. 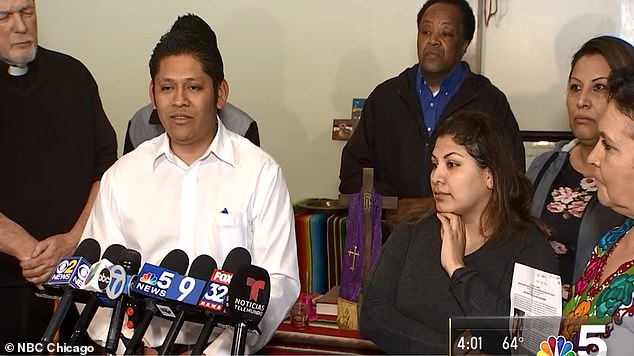 A woman who used to let the 46-year-old babysit her child said she had begun to act strangely recently.

‘She told me how she was getting really attached to the baby, how she couldn’t wait to be a mom again,’ the woman told ABC 7.

Giovanni Lopez, Ochoa-Uriostegui’s husband, was able to visit his son for the first time on Tuesday night and named him Yadiel Yiovanni Lopez.

Sara Walker, a student pastor who is helping Ochoa-Uriostegui’s family communicate with police, said the newborn has severe brain damage and is on life support.

‘It does not look good for the baby, but they are praying and hopeful,’ she added.

Lopez said he was in a ‘lot of pain, a lot of anguish, a lot sadness’.

But the grieving widower said he and Ochoa-Uriostegui’s family are determined to get justice.

‘We’re gonna have justice with those responsible,’ he told Fox News 32.

Neighbors said there was a lot of police activity on Wednesday night with detectives removing large amounts of evidence and searching the backyard and basement.