A judge has declared a mistrial for a southern Indiana man accused of killing his ex-girlfriend and eating parts of her body.

Clark County Circuit Judge Vicki Carmichael made the ruling Thursday after a witness called by prosecutors on the first day of testimony brought up defendant Joseph Oberhansley’s past drug use and time in prison.

Joseph Oberhansley is accused of breaking into the Jeffersonville home of his ex-girlfriend, Tammy Jo Blanton, 46, in September 2014 and then raping her and fatally stabbing her, before eating parts of her body – including her brain.

Carmichael said that information shared by a witness could have prejudiced the jury.

A mistrial was declared and a new court date of September 3 was set by the judge. A new jury will also be selected.

The murder trial has begun for Indiana man, Joseph Oberhansley (pictured in court Thursday), 38, who is accused of killing his ex-girlfriend, Tammy Jo Blanton, 46, in September 2014 and eating her body parts after their breakup

Opening arguments were heard Wednesday, but Thursday marked the first day of testimonies, in which two of Blanton’s friends told jurors that the victim was so terrified of her ex-boyfriend she moved out of her home and in with a friend for several days.

After he father changed the locks she reluctantly moved back in, reassuring friends that she had the police ‘on speed-dial’.

But a third witness, another of Blanton’s friends referenced Oberhansley’s criminal history and drug use during their time on the stand.

Judge Carmichael had previously ruled that both topics of discussion were to be inadmissible at trial. She called a brief recess and then declared a mistrial.

Lead defense attorney Brent Westerfeld voice his disappointment over the decision, but ultimately concluded it was the right thing to do.

‘You feel like you were ready to go and suddenly you can’t go anymore so it’s very much a let down,’ he told WLKY.

Clark County Prosecutor Jeremy Mull said all witnesses had been warned what they could and could not discuss during the trial, prior to testimony.

‘As unfortunate as this event was today I don’t think it’s going to get us very far off track. I do expect to have this trial going in September and by September sometime to have a verdict in this case.

‘The last thing in the world I can do is put this family through another four or five years of delays, trying to get another trial date. So if I’ve got to wait a week or two weeks behind schedule that’s fine.’ 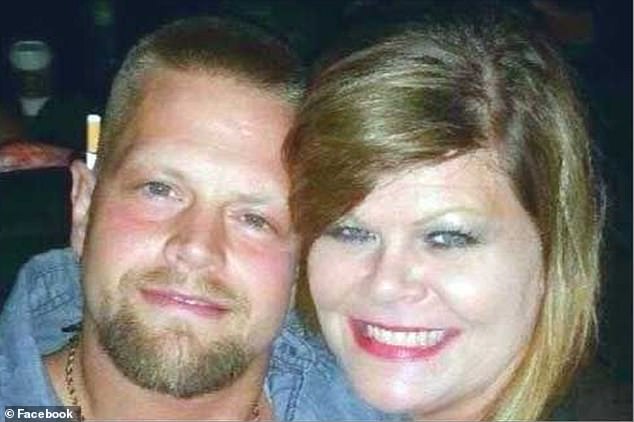 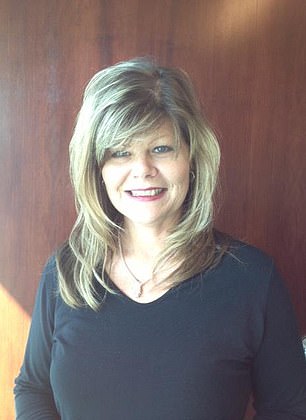 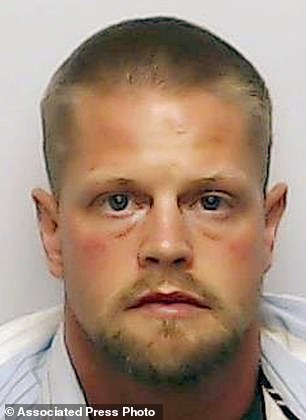 Oberhansley (right) then reportedly used an electric jigsaw to open Blanton’s (left) skull. The so-called ‘cannibal killer’ previously admitted to the crimes including ‘cooking a section of her brain and eating it’. Authorities also said he devoured parts of the victim’s heart and lung

In his opening statement Wednesday, Mull told the jury that evidence will show old Oberhansley kicked in the door of Blanton’s Jeffersonville home nearly five years ago and stabbed her to death.

Mull said Oberhansley then removed and consumed parts of her organs, including her brain.

‘Joseph Oberhansley butchered Tammy Blanton like you wouldn’t kill a livestock animal,’ Mull said, according to the Courier-Journal.

Mull said Oberhansley had gone to the 46-year-old’s home to ‘talk some sense into her’ after she broke off their relationship.

He reportedly used an electric jigsaw to open Blanton’s skull.

The so-called ‘cannibal killer’ had previously admitted to the crimes including ‘cooking a section of her brain and eating it’ after his arrest in Jeffersonville, Indiana, police said.

Authorities also said he devoured parts of the victim’s heart and lung.

However, Oberhansley has called the allegations against him ‘all bull crap lies’ and insists he is innocent.

Blanton had accused Oberhansley of rape the weekend before her murder. But Oberhansley claims that was also a lie.

In a 10-minute rant at a pre-trial hearing last month at Clark County Court, Oberhansley claimed Blanton was ‘getting high and drunk and texting a bunch of bull crap’.

Oberhansley also told the judge that he had uncovered new evidence that pointed to his innocence.

He suggested detectives had missed the murder weapon as it could not have been the ‘cheap little knife’ investigators found.

Oberhansley ignored his frustrated lawyers who warned him to keep quiet. The judge cautioned him to save his comments for his trial.

But then Oberhansley brazenly tried to hold a news conference on his way-out of court before sheriff’s deputies led him away.

Oberhansley was found mentally not competent in October 2017 to be tried. He was hospitalized for more than six months at Logansport State Hospital after the judge ruled he wasn’t capable of participating in the trial.

But last year, a doctor from Logansport filed a report certifying that Oberhansley was competent and he was released back to police custody.

In November 2018, a judge decided that Oberhansley was fit to stand trial based off the doctor’s report, which found his competency had been restored during his time at the psychiatric hospital. 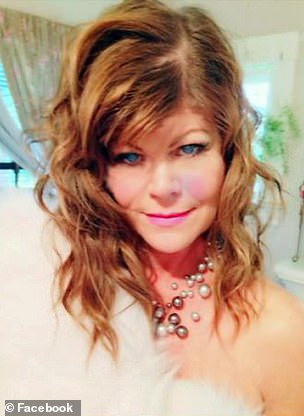 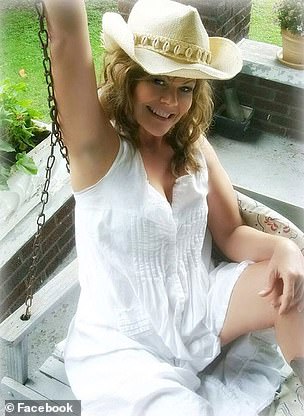 Blanton (left and right) was found with parts of her skull removed under a vinyl camping tent draped over her bath in September 2014. Cops also found a ‘plate with what appeared to be skull bone and blood’ on it in her home 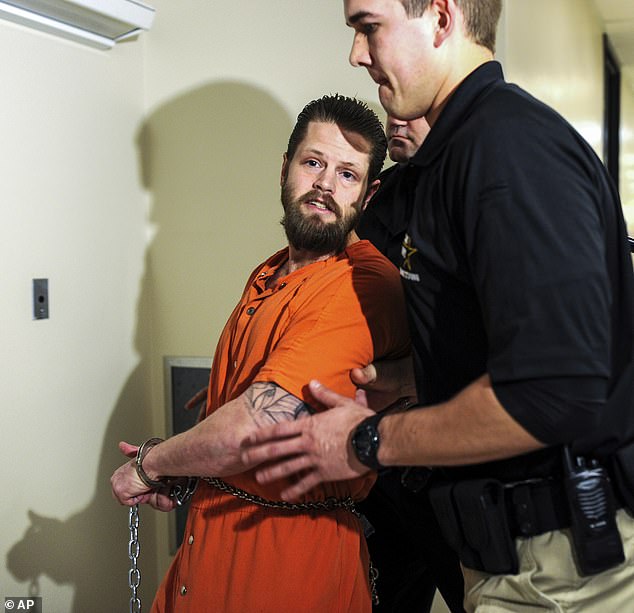 At the time of the murder, Oberhansley was free on parole for fatally gunning down his girlfriend Sabrina Elder, 17, in a drug-fueled jealous rage in 1998. Oberhansley is pictured in March 2015 during a court appearance

Blanton was found with parts of her skull removed under a vinyl camping tent draped over her bath in September 2014.

Cops also found a ‘plate with what appeared to be skull bone and blood’ on it.

A skillet, a pair of tongs with blood on the handles and tissue were in the rubbish bin.

An autopsy revealed she died from multiple stab wounds and parts of her heart, lungs and brain were missing.

At the time of the murder, Oberhansley was free on parole for fatally gunning down his girlfriend Sabrina Elder, 17, in a drug-fueled jealous rage in 1998.

He also shot his mother in the back and fired at his sister before tucking the weapon under his chin and pulling the trigger to give himself a ‘partial lobotomy’.

Jury selection began Monday for Oberhansley’s trial. Because of the attention the case garnered in Clark County, which is across the border from Louisville, Kentucky, and is where the killing took place, the jury was being selected in the Indianapolis suburb of Noblesville, which is about 120 miles north, in Hamilton County.

After jury selection was complete, the jurors and alternates were brought to Clark County. They will be sequestered for the duration of the trial.

Oberhansley told the judge in May that he felt that using the insanity defense would in part amount to admitting guilt to jurors.

‘I don’t suffer from any mental illness,’ he told the court that day.

Clark County’s former prosecutor had planned to seek the death penalty, but Mull, told the court in June that this was no longer the case, saying in a filing that there was a high risk of the case being overturned on appeal due to Oberhansley’s mental status and noting the high cost of capital cases.

He also indicated that Oberhansley’s attorneys agreed not to use mental health information in his defense, based on Oberhansley’s refusal to use an insanity defense.

Oberhansley faces life in jail without parole if convicted.