Mnuchin next on chopping block? Trump’s grumbling about his Treasury secretary

President Donald Trump fired back at a report he’s unhappy with Steven Mnuchin, calling it ‘fake news’ and saying he’s ‘extremely happy and proud of the job’ being done by his treasury secretary.

‘I am extremely happy and proud of the job being done by @USTreasury Secretary @StevenMnuchin1. The FAKE NEWS likes to write stories to the contrary, quoting phony sources or jealous people, but they aren’t true. They never like to ask me for a quote b/c it would kill their story,’ he wrote on Twitter Friday night.

‘Fake news’ is one of the president’s favorite insults for stories he doesn’t like.

Mnuchin was said to be onTrump’s bad side, the Wall Street Journal reported on Friday afternoon, as the president worries moves from that department could hurt the economy and, thus, jeopardize his reelection bid.

Trump is expressing dissatisfaction with Mnuchin and blames him for the appointment of Jerome Powell as Federal Reserve chairman, who has been raising interest rates, the paper noted.

The president is said to be concerned the rising interest rates will hurt economic gains and that, in turn could harm his 2020 election chances. 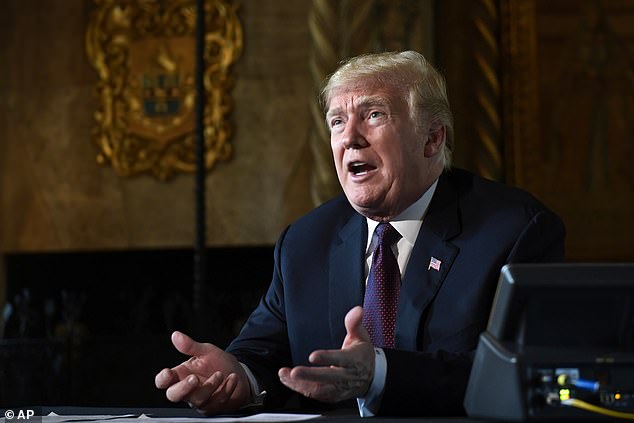 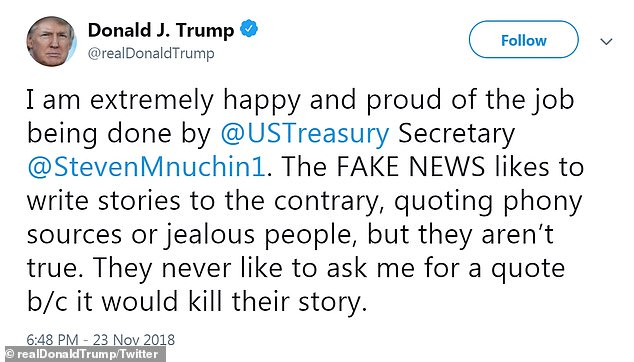 But Trump fired back at the report, saying he’s ‘extremely happy’ with Mnuchin

The grumblings against Mnuchin are said to be following a similar path as those that led to the eventual dismissals of Secretary of State Rex Tillerson and Attorney General Jeff Sessions.

Trump is also said to have voiced frustration with Mnuchin over the turbulent stock market and the treasury secretary’s skepticism toward the trade actions the White House has taken against China, sources told the Journal.

Aides said Trump watches the stock market as a barometer of his White House performance just as important as his approval ratings.

‘If he’s so good, why is this happening?’ Trump said of Mnuchin, a source told the Journal.

However, aides often fall in and out favor in the president’s eyes and this rumblings don’t necessarily mean the treasury secretary could be on his way out the door.

He and Trump have a personal relationship going back to their New York business days. They once worked on a hotel together in Hawaii and Trump attended Mnuchin’s wedding.

The White House told the paper Trump and Mnuchin have a good relationship.

‘The president has long been clear about his views on the Fed,’ said White House spokeswoman Lindsay Walters in a statement. ‘He has a good relationship with Secretary Mnuchin and is thankful for all the work he does on behalf of his administration and the American people.’

Trump told reporters in Mar-a-Lago on Thursday he is interviewing people for jobs in his administration.

But he declined to say for what positions.

It’s Powell’s performance as fed chair that is said to be a sticking point for the president and Trump is said to have wondered if he should have picked someone else, even mentioning mentioning JPMorgan Chase & Co. Chief Executive Jamie Dimon as an alternative.

Trump picked Powell on Mnuchin’s recommendation and tends to blame those who prompted the person when he gets frustrated with an appointee.

Speaking about Powell in a conversation in the past few weeks, Trump told Mnuchin: ‘I thought you told me he was going to be good,’ people briefed on the matter told the Journal. 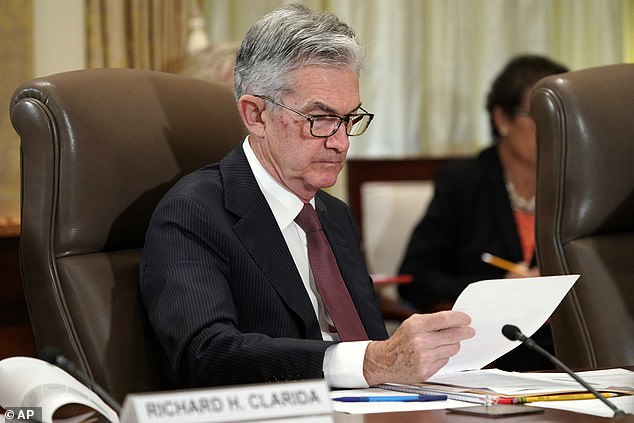 Trump is said to be worried that Fed Chair Jerome Powell’s (above) raising interest rates will hurt the economy, which, thus could damage his 2020 reelection bid 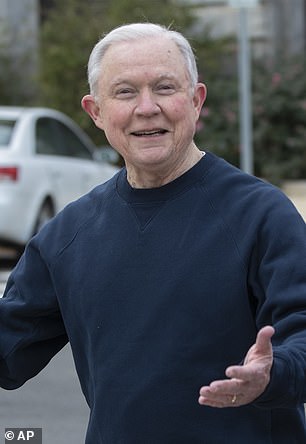 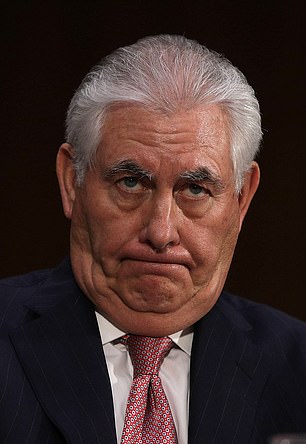 Mnuchin has publicly defended Powell, who goes by Jay. ‘I think Jay has been a phenomenal leader at the Fed,’ he said.

Fed officials have raised their benchmark interest rate three times this year, including in September when they raised it to a range between 2 percent and 2.25 percent and it’s expected to be raised again at their December meeting.

Trump slammed Powell in an interview with the Journal last month.

‘Every time we do something great, he raises the interest rates,’ the president said, adding that Powell ‘almost looks like he’s happy raising interest rates.’

He also named the fed as the biggest risk to the U.S. economy, whose strength he touted repeatedly – and took credit for – on the campaign trail during the 2018 midterm election.

‘To me the Fed is the biggest risk, because I think interest rates are being raised too quickly,’ Trump said last month.