Mohamed Salah ends his Liverpool stand-off and signs a three-year deal worth nearly £400,000-a-week to become the best paid player in Anfield HISTORY after months of talks

Mohamed Salah has ended his contact stand off with Liverpool and committed his future by signing the biggest deal in the club’s history.

Salah had entered the final 12 months of his current terms, which were signed in July 2018, but after months of negotiations Liverpool and Salah have come to an agreement that will see him remain at Anfield until June 2025 on terms estimated to be close to £400,000 per week.

It is a huge moment for both Jurgen Klopp and Salah, as it removes all speculation about what the 30-year-old will do next. 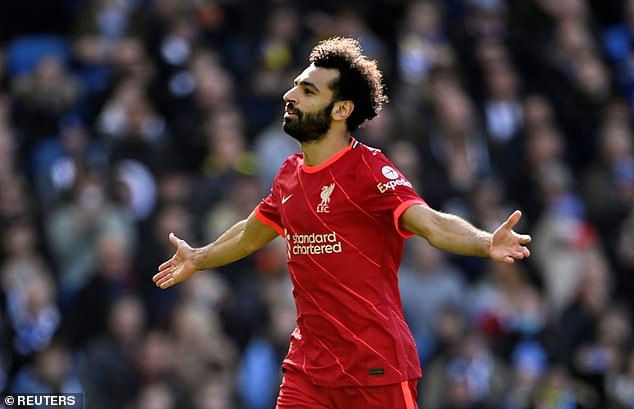 There had been indications that he would run his contract down and move for free next summer but all such chatter is now at an end.

It has always been Salah’s preferred wish to stay on Merseyside, where he has become an icon since joining from AS Roma in 2017.

He has been one of the best buys the club has ever made and is in the all-time top 10 scorers in Liverpool’s history.

Julian Ward, Liverpool’s Sporting Director, flew out with a delegation to Mykonos, where the Egyptian has been on holiday, to get the paperwork signed and the business reflects Salah’s position as one of the current best players in the world.

Salah has been instrumental to the Reds recent success, including last season’s FA Cup and Carabao Cup triumphs.

Salah told the club website: ‘I feel great and [I am] excited to win trophies with the club. It’s a happy day for everyone.

‘It takes a little bit of time, I think, to renew, but now everything is done so we just need to focus on what’s next.

‘I think you can see in the last five or six years the team was always going [upwards]. Last season we were close to winning four, but unfortunately in the last week of the season we lost two trophies.

‘I think we are in a good position to fight for everything. We have new signings as well.

‘We just need to keep working hard, have a good vision, be positive and go for everything again.’