A teenage model who was sexually assaulted in a busy train station just yards away from her mother has waived her right to anonymity to urge other victims to speak out.

Hariotte Lane was groped as she walked through the barriers at Newcastle Central Station after visiting a friend in Barnsley.

The 16-year-old was no more than 10 feet away from her mother Sarah who was there to collect her when Steven Cartwright, 55, touched her in August last year.

Hariotte Lane, 16, (pictured) was groped as she walked through the barriers at Newcastle Central Station after visiting a friend in Barnsley 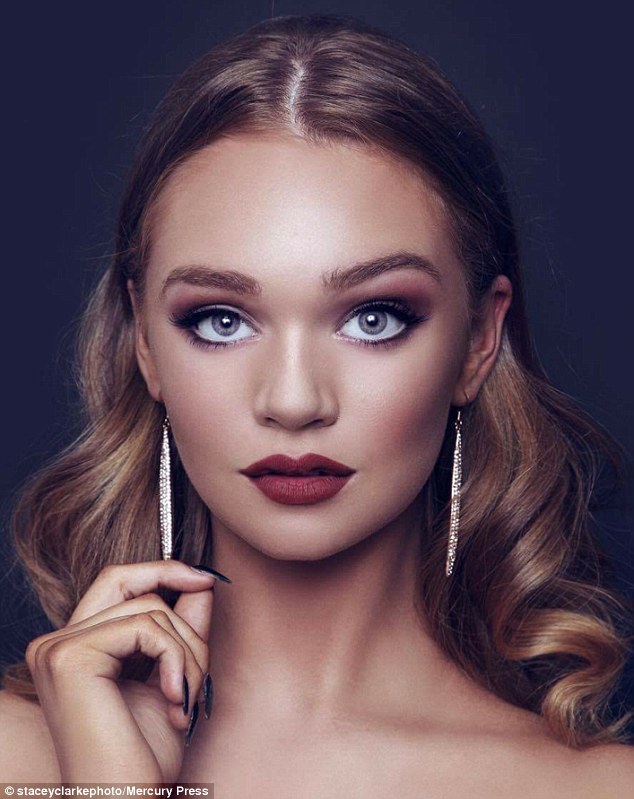 It was the first time the current Miss Teen Tyne & Wear Galaxy had been allowed to travel on her own, making her feel ‘grown up’.

But as her mother caught sight of her she saw her in floods of tears. Now she says the ordeal has left her feeling ‘sick, anxious’ and unable to travel alone.

Harriotte, of West Allotment, North Tyneside, explained: ‘It was the first time I’d travelled alone and felt really responsible and grown up.

‘I’d travelled on trains with my mum so many times for modelling jobs so I knew it wasn’t a problem.

‘I had my hands full with my suitcase and handbag and walked through the underpass.

‘He walked past and grabbed me on my bum, it was humiliating. 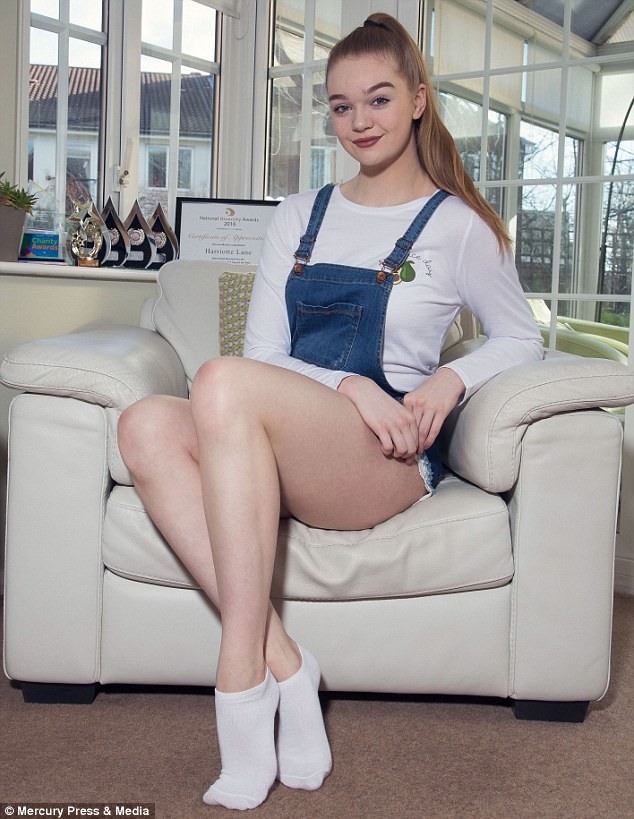 The 16-year-old (pictured at home in North Tyneside) was no more than 10 feet away from her mother Sarah who was there to collect her when Steven Cartwright, 55, touched her in August last year

‘In that moment I felt disgusted in myself. I instantly got upset and shouted ‘you can’t do that’. He just walked off, it was overwhelming.

‘I didn’t realise it was something serious enough to complain about but when mum told me otherwise I felt like something could actually be done about it.’

Harriotte had to go through the station underpass to exit the station building, which is where she was confronted by Cartwright. She was wearing denim cut-off jeans, a sweater and trainers.

After explaining what happened to her mother, Ms Lane shouted at some police officers patrolling the station, who chased after her attacker and arrested him.

Harriotte, who was teased for being six foot tall as a 13-year-old, said the full impact of what happened only hit her a few days later before the incident played out in court – and continues to affect her to this day.

The fashion business and retail student said: ‘I was definitely more withdrawn and had bad anxiety because of it.

‘I felt sick, dizzy, out of breath and scared. I still can’t bear to be in a crowd with people behind me, it freaks me out.

‘The first time I went back on a train to go to a modelling job in London a week later, I was in a state as it brought back memories of what happened and made me worried it would happen again.

‘Coming back from London, knowing we would be arriving at Newcastle train station, was difficult.

‘I was physically sick all the way home from York onwards and just couldn’t stop and was shaking.

‘I couldn’t travel on the train for a good while after that..’

He was sentenced to 250 hours of community service, 20 days of rehabilitation and was ordered to pay £100 compensation and to sign the sex offenders’ register for five years.

Harriotte’s mother, a marketing director, said the assault had stolen part of her daughter’s childhood. 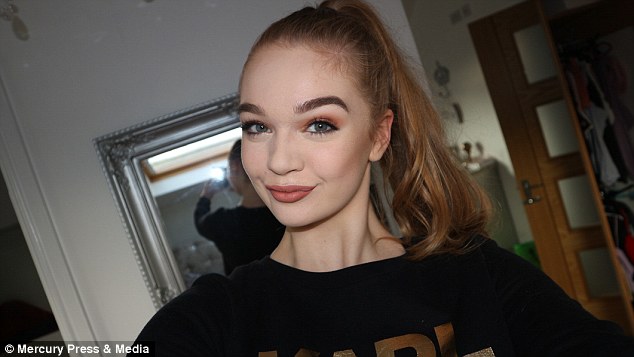 The 44-year-old said: ‘I met her at the train station and was smiling and waving at her as I hadn’t seen her for a week and was all excited.

‘I was waiting on what I thought was the other side of the exit barrier but it wasn’t, so Harriotte walked round and had to go under the footbridge.

‘The station was absolutely rammed at the time. I was no more than 10ft from the footbridge and she wasn’t out of my sight until she had to walk underneath.

‘Harriotte had gone from laughing and smiling while walking past the barriers to tears pouring down her face when she came out of the underpass.

‘You could see she was distressed and didn’t know what to do, she was in a right state.

‘When I asked her what had happened she was just shaking her head, then she said ‘a man touched me’.

‘There was a policeman directly behind me so I shouted over and within minutes they caught him. 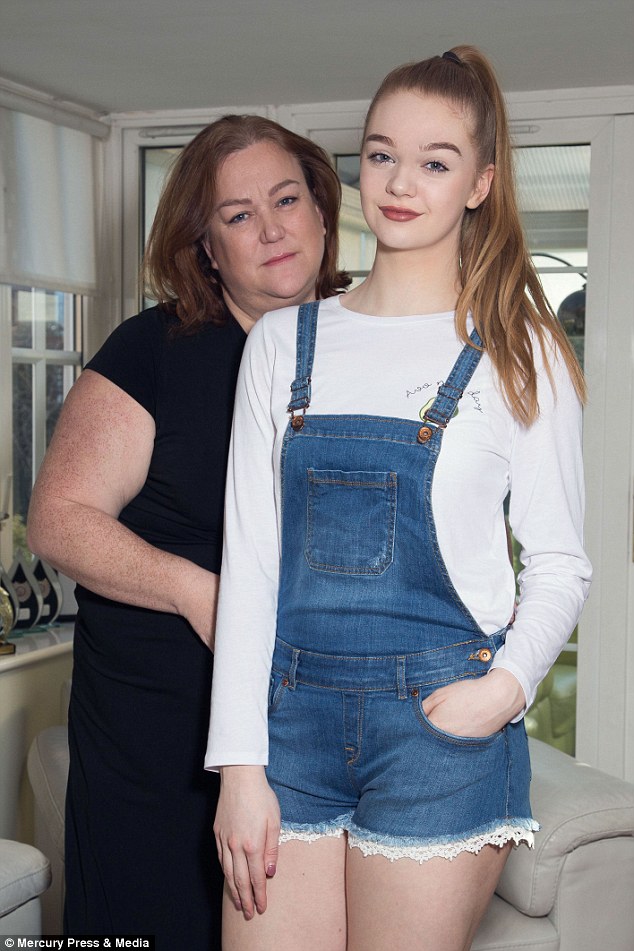 Hariotte is pictured with her mother Sarah Lane, who shouted to police officers at the station, who managed to catch and arrest her attacker

‘Harriotte first thought was that it wasn’t ‘enough of an assault’ for the police to be involved, it’s horrible to think we need a ‘quantity’ of it.

‘She blamed herself and felt she’d maybe got it wrong.

‘I felt so angry and upset, I can’t even put it into words. It’s so disgusting to do it to any human being, it’s such a violation.

‘It was her first time travelling on her own. It should have been one of those moments of being grown up – getting older and being trusted to go out and about on your own.

‘Instead it took away some of her childhood innocence, you don’t want to have to explain to your child that kind of thing.’

Harriotte has made the brave decision to share her experience to highlight what she went through and encourage others to speak out.

She said: ‘I want to be able to educate people to let them know it’s not okay.

‘In the moment you need to know that and that the people doing it can’t get away with it.

‘The more I speak about it and the more people group together and know that, the better.

‘I think the Me Too campaign is so inspiring – it’s great that everyone involved is taking a stand, showing you don’t have to bottle it up and that there’s nothing to be embarrassed about.

‘We have worked hard in recent years to provide swift support to victims and ensure that any report of an offence of this nature will be taken seriously and will be investigated.

‘Our ‘Report It To Stop It’ campaign aims to encourage victims to report any unwanted sexual behaviour that they may experience on the rail network and I would encourage anyone who is subjected to any form of harassment or abuse to inform us as soon as they reasonably can.

‘Time is of the essence, not only for us to respond to your report, but also to get you support should you need it – every report helps us to build a picture of offending behaviour and gives us the ability to target perpetrators.

‘We have specially trained officers who work hard to identify and find those who are responsible.

‘If you are a victim of a sexual offence or any form of unacceptable behaviour or harassment then please text British Transport Police on 61016 or call 0800 40 50 40.’ 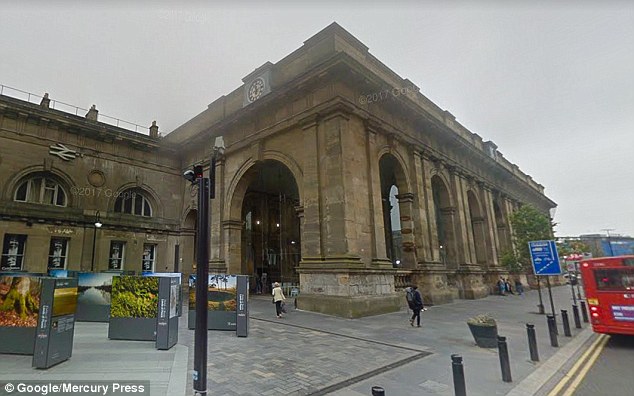 Scene of the crime: Hariotte was attacked by Cartwright at Newcastle Central Train Station