A crowd of more than 70,000 people have celebrated the end of a sparkling Rio Carnival with a star studded samba parade.

The champions parade at the huge concrete Sambadrome arena, where samba schools compete to be crowned carnival winners, finished off the week-long cultural extravaganza.

Stunning photos highlight the beauty and pageantry of the annual event in Brazil’s largest city.

Victoria’s Secret catwalk model Izabel Goulart was spotted at the all night party in a phenomenal diamante chain bra on Saturday.

She was joined by actress Bruna Marquezine, 34, but ensured all eyes were on her as she showcased her jaw-dropping figure in the racy top.

The carnival began on the afternoon of Friday, March 1, with the last main parade taking place on Wednesday, March 6. 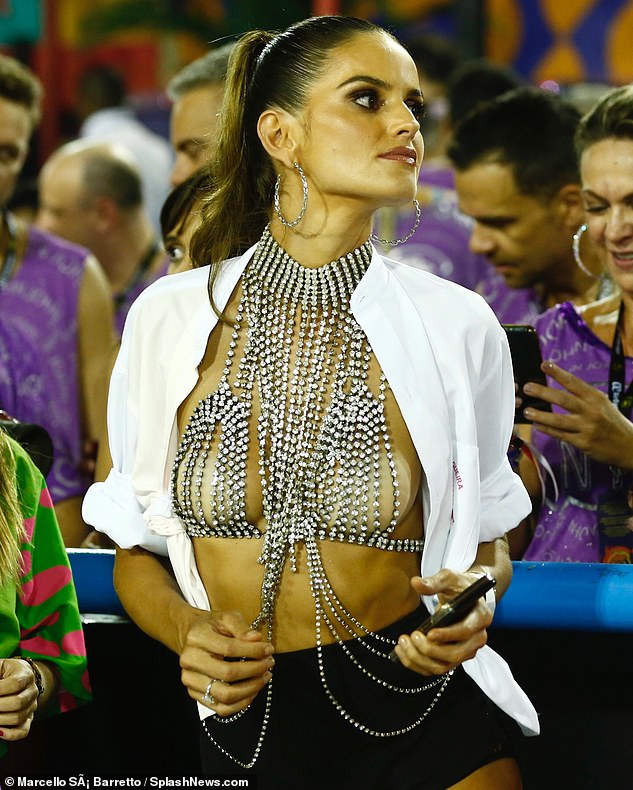 Eye-catching display: Izabel Goulart showcased her phenomenal figure in a diamante chain bra for the final day of the Rio Carnival on Saturday 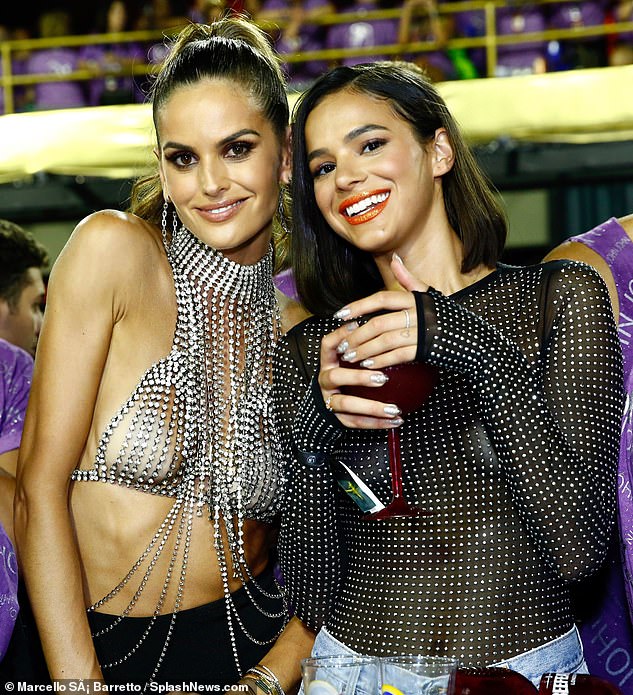 While the parade arena was full to capacity, blocos – street parties during the carnival – are believed to have brought over two million people out in the streets singing or dancing each day.

Model Izabel looked like she was dripping in diamonds in the high collared bra, with the jewels cascading down onto her enviably-toned stomach.

The runway queen left little to the imagination as she flashed plenty of sideboob and her fabulous figure in the backless bralet during the raucous street party. 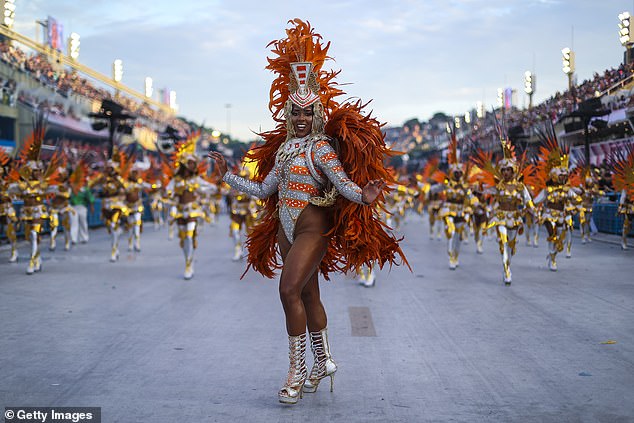 Rio’s two main nights of Carnival parades began on March 03 in a burst of fireworks and to the cheers of thousands of tourists and locals. A member of Mocidade Independente de Padre Miguel Samba School performs during the parade 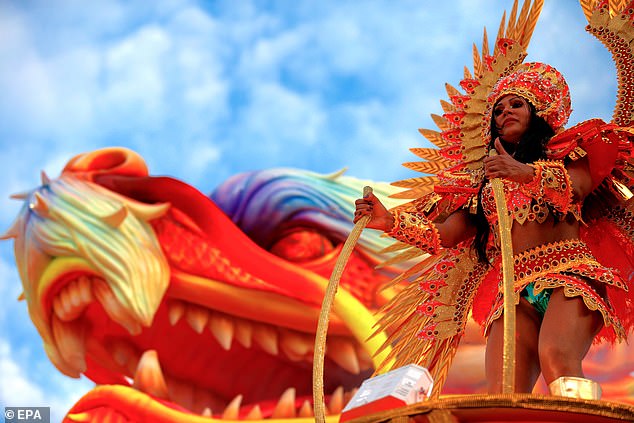 Elaborate flotillas are constructed by each of the samba schools, who are made up of neighbourhoods with some kind of common background in the hope of being crown carnival champions. The Grupo Especial Mocidade Alegre take their float through the main parade 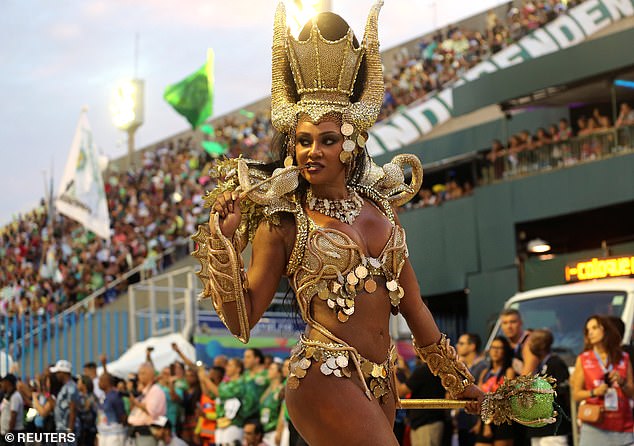 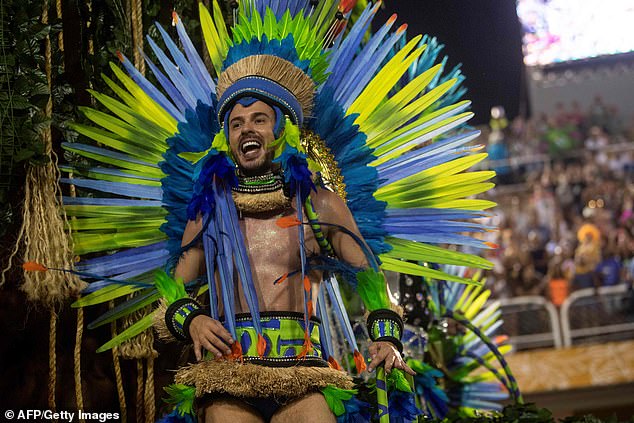 More than 200 different samba schools compete annually for the carnival crown. A member of Mangueira school shows off a large feather headdress in classic carnival colours green and blue 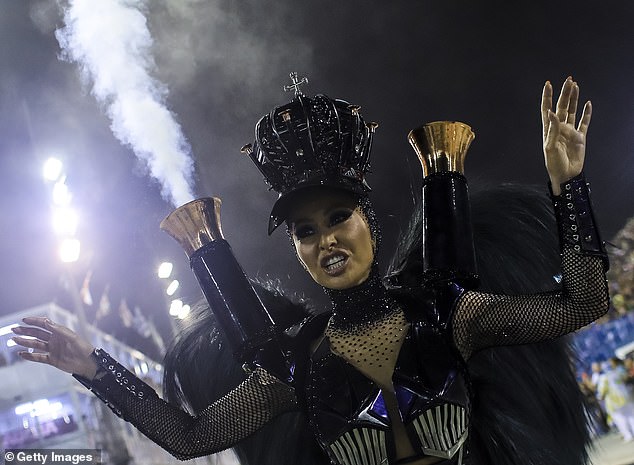 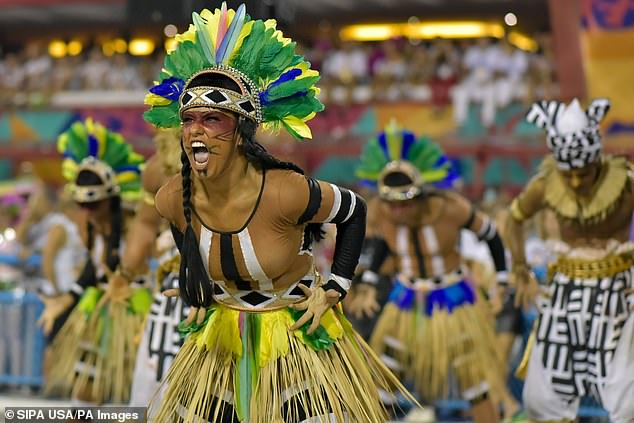 Putting on a show: The crowds were treated to dances and songs by the perfomers who were costumes inspired by their communities

She wore her brunette locks in a sleek high ponytail and accentuated her golden glow with a glamorous make-up look.

Izabel took to Instagram to post a photo of her jaw-dropping outfit as she stood side-by-side with pal Bruna. 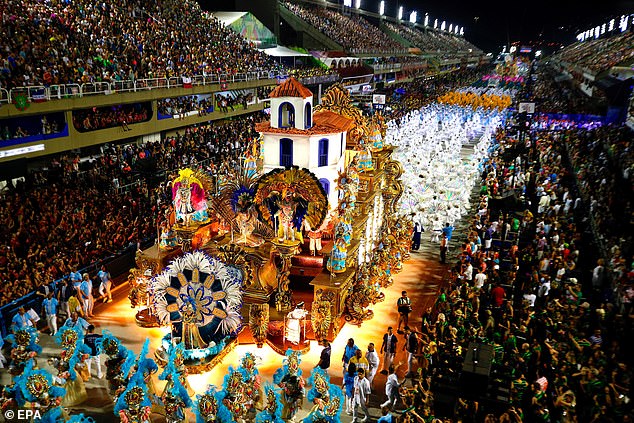 The 70,000-seater Sambadrome in Brazil’s biggest city Rio de Janeiro. The massive concrete arena runs across multiple roads in the Cidade Nova neighbourhood which have to be closed for the week-long parade 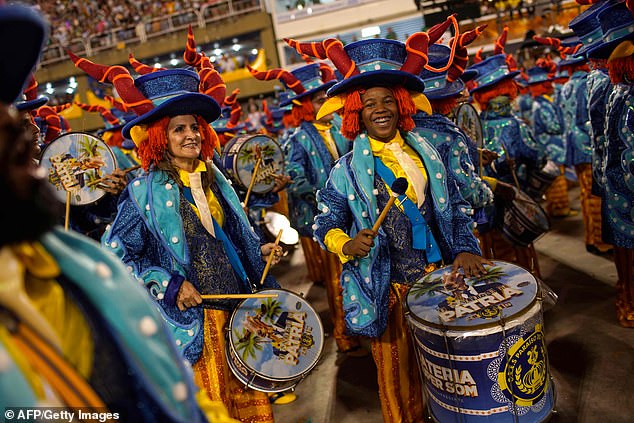 Music is another integral part of the carnival and is encorporated into the samba schools’ acts for their parade. Members of the Paraiso do Tuiuti are pictured 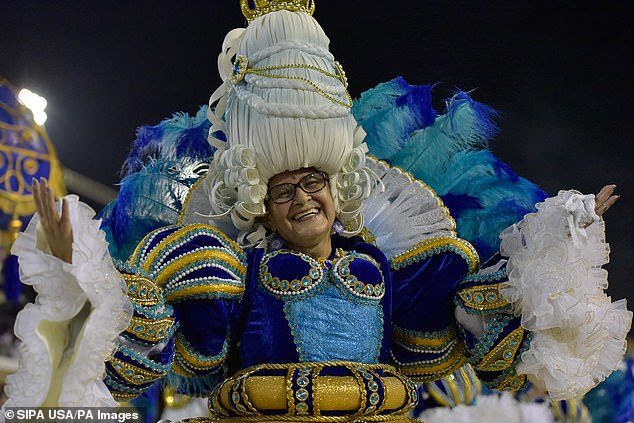 Getting wiggy with it: One member of Unidos de Vila Isabel donned a giant cream wig for the ceremony for what bears a passing resemblance to beauty and the beast 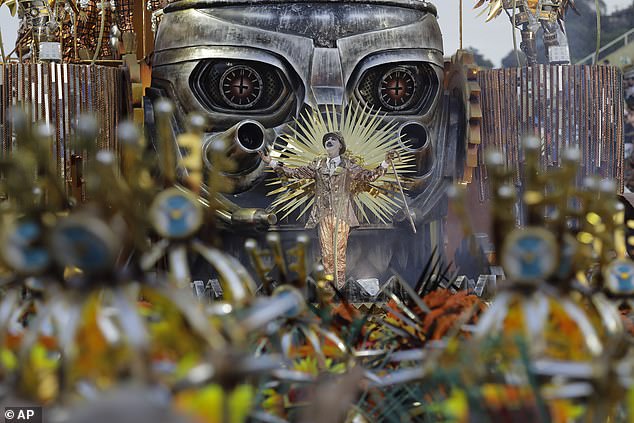 Star of the stage: A performer wears a large spiky star on his back and stands in front of a menacing machine on the parade route 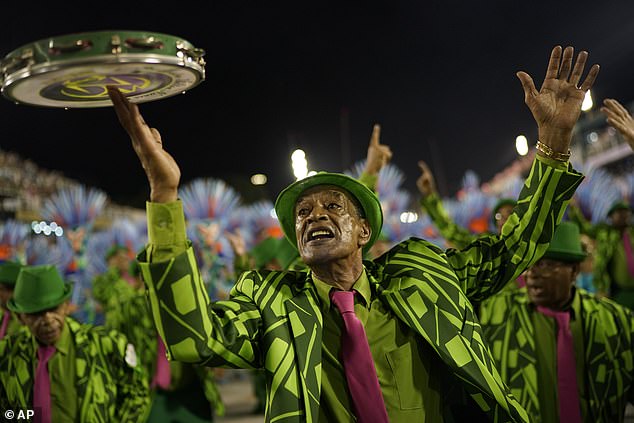 A smartly dressed troupe from the Mangueira samba school look keen to impress in green patterned suits and pink ties. One performer balances a tambourine on his fingertips 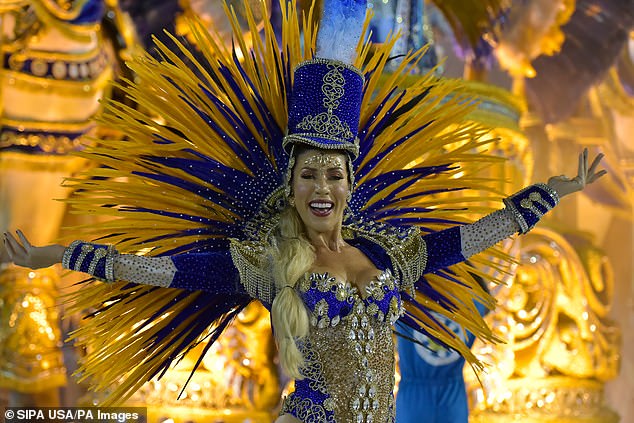 Making a statement: The costumes seen in the parade were designed to turn the heads of spectators as well as other competitors on the two-night party 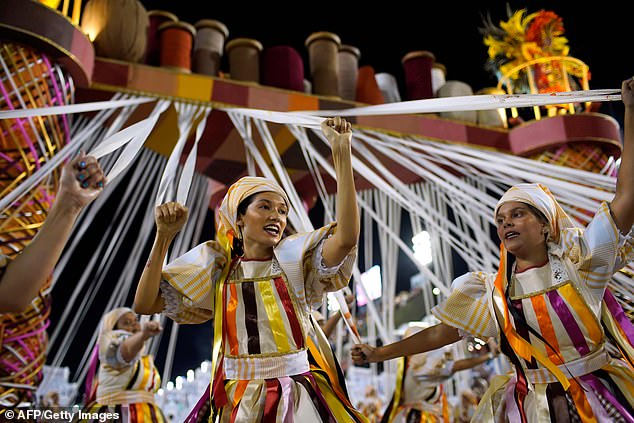 Members of the Portela samba school pull white ribbons out of a sewing-inspired float. HIgh quality costume designs are a key part in deciding the worthy champions of the Rio Carnival

Celebrating the last day of the carnival, the pair looked like they were having the time of their life as they watched the famous parade take place down the Sambadrome Marquês de Sapuca.

Izabel returned to her home country just two weeks after she enjoyed a break in Paris with her fiancé Kevin Trapp.

The couple’s love story goes back to when they first started dating in 2016 but the couple have kept their romance fairly low-key in the limelight.

The lovebirds very happily announced their engagement in July last year during their romantic break to Mykonos, Greece. 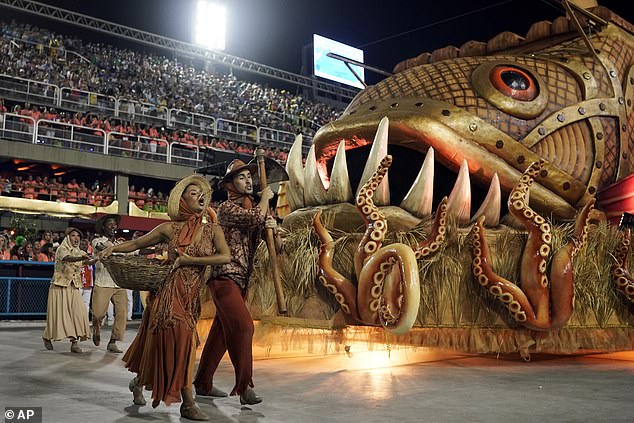 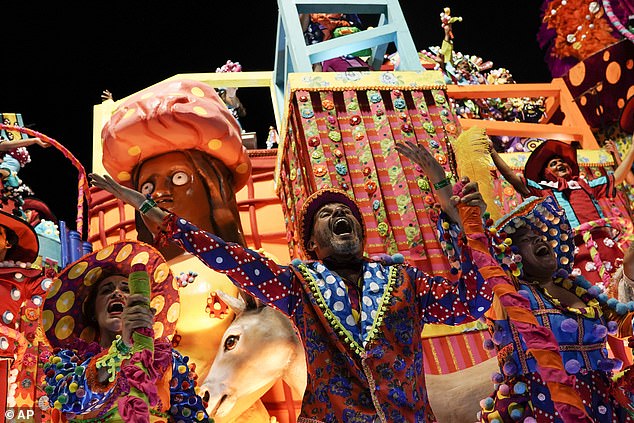 Under the spotlight: A dot-inspired group from the Paraiso do Tuiuti samba school enjoy themselves on the parade route 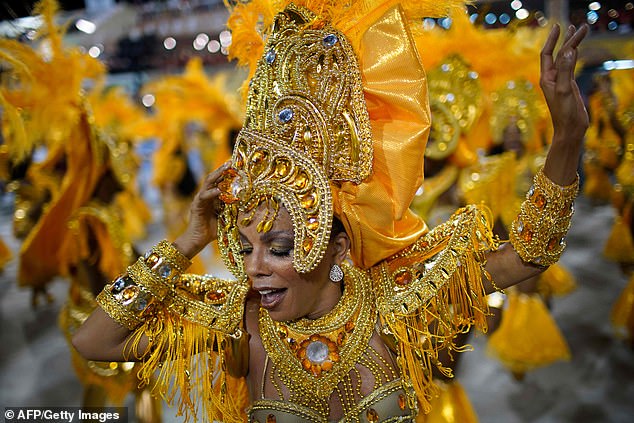 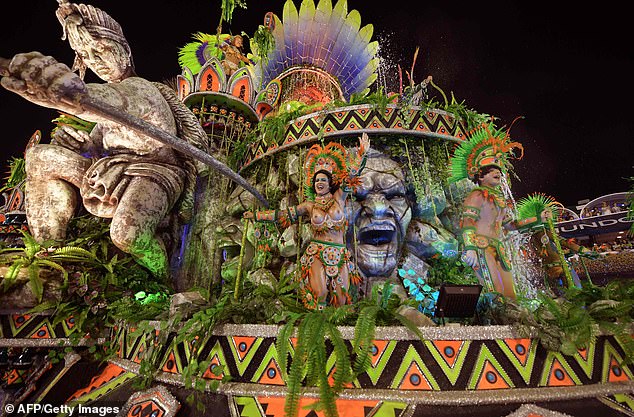 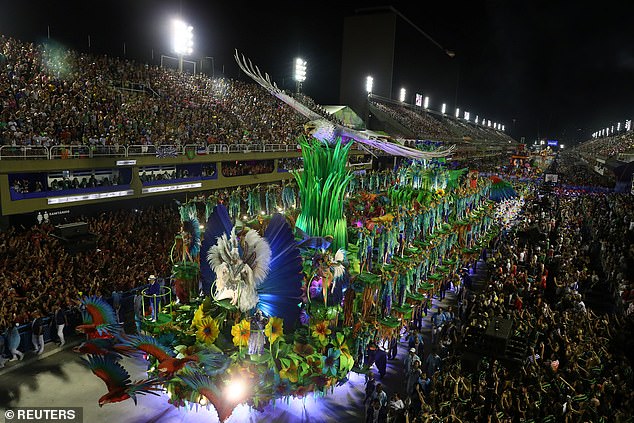 The carnival finished last night with a champions parade through the Sambadrome in front of 70,000 spectators