‘Wouldn’t live anywhere else’: Model Jesinta Franklin shuts down rumours her AFL star husband Buddy could be traded after a lacklustre start to the season

Model Jesinta Franklin has shut down rumours her AFL star husband Buddy Franklin could be traded after a shaky start to the season for his team.

Tongues started wagging after former Collingwood captain and coach Tony Shaw suggested the Sydney Swans trade Franklin ‘while he still has a little bit to offer’.

‘Wouldn’t live anywhere else,’ she captioned the image.

She shared a photograph of the water in Sydney on Sunday and captioned it: ‘Wouldn’t live anywhere else’

Swans coach John Longmire also slammed the suggestion as little more than a headline, asking reporters: ‘I don’t think anyone took it seriously did they?’

‘That’s all it does, create articles and discussions. The serious football journos wouldn’t have fallen for that,’ he said during a press conference after the Swans took on the Tigers.

Franklin’s Sydney Swans, who have made it to the finals ever year since 2009,  have found themselves in the bottom four after winning just one game this year.

The Swans lost by 22 to the Richmond Tigers on Saturday, despite Franklin scoring four goals during the game.

His star performance pushed his goal total to 928 and made him the seventh highest goal scorer of all time.

Franklin moved from Hawthorn to the Swans in 2013, mainly to be closer to his then-girlfriend, 27-year-old model Jesinta Campbell.

He signed a nine-year deal worth more than $10million, which means even if the Swans were to trade him, it would cost them significantly and lose them one of their most marketable players. 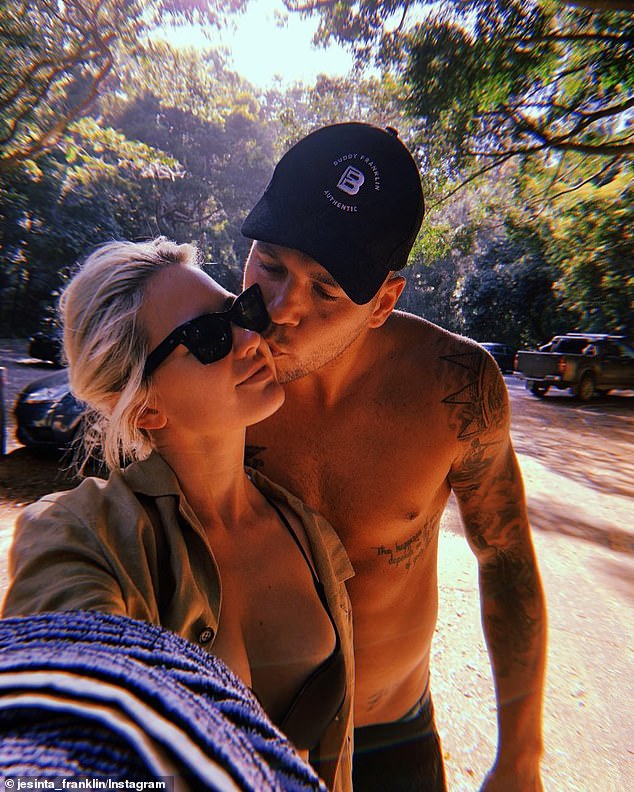 Buddy moved from Hawthorn to Sydney in 2013, with his relationship to the 27-year-old model playing a big part in his decision 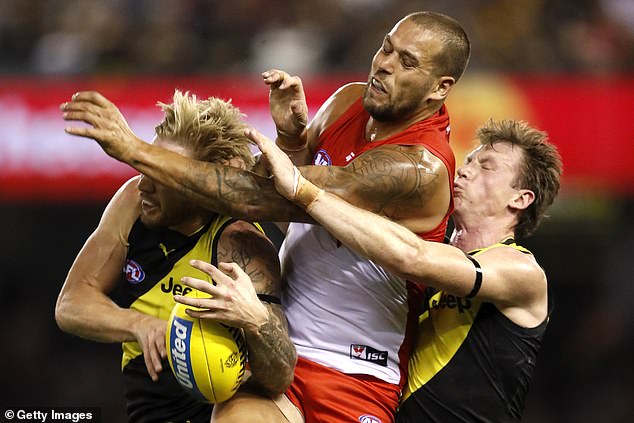 On Saturday, Franklin became the seventh highest goal scorer in AFL history, with a combined total of 928 goals

Before the start of the 2019 season, St Kilda legend Leigh Montagna also suggested the Swans should think about offloading Franklin while he was still a valuable player.

‘I do have my doubts,’ Montagna told Fox Sports News’ AFL Tonight.

‘I don’t want to be a pessimist but we heard about him not training basically at all last season. We know that he hardly trained this pre-season.

‘At 32 years of age, we know he’s a freak show and he’s highly talented. But you just can’t keep rocking up and delivering what he’s done for so long now.

‘I don’t want to say the end’s near, but I’m just a bit concerned where Buddy’s fitness will be this year and what his body allows him to do and it might be the start of the decline.

‘He’s getting on in age and he’s been a star for so long, it’s just that his body just can’t keep doing it.’