The scene could be the aftermath of a riot — or a tornado or a bomb explosion. Little wonder these images have united all sides of a divided nation in asking a single, simple question: Why?

For this is not the result of some major disaster. This is what happened when a gang of teenagers decided to attack a model railway display in a secondary school at the weekend

Having awoken on Saturday morning to find decades of painstaking work pulverised by a gang of yobs, the members of Market Deeping Model Railway Club were last night in tears all over again following an astonishing global response to their appeal for help.

In next to no time, their modest fundraising target of £500 — merely to cover their losses from what was supposed to be a charity exhibition — had been dwarfed by donations from as far afield as Australia and New Zealand.

By lunchtime, lifelong train enthusiast Sir Rod Stewart had been in touch to say he was ‘devastated’ and was adding £10,000 to the kitty. He urged fellow railway enthusiasts to follow suit.

‘It took me 23 years to build my model railway so I feel their pain,’ explained Sir Rod, 74, who has assembled a 100ft model railway at his U.S. home in Beverly Hills.

As of last night, the fighting fund had surpassed £86,000 and was still rising.

‘It really does restore your faith in human nature,’ club chairman, Peter Davies, 70, told me. ‘I can’t say a big enough thank you to Rod Stewart and all the other people out there who have got in touch.’

The money will be used to cover some substantial repairs with the remainder expected to go to a charitable trust.

I arrived at the club’s modest premises yesterday to find the members still stunned by the chain of events which began in the early hours of Saturday when vandals broke in to the sports hall at Stamford Welland Academy, Lincolnshire, the school where the club had been preparing to stage their annual show.

The stalls had been erected the night before; the programmes had been printed. A bumper crowd of more than 500 enthusiasts from all over the country was expected to admire five ‘layouts’ — as ‘modellers’ call displays.

Each was an intricate, fully functional portrait of a scene from the age of steam. In addition, there would be stalls selling model railway ephemera, not to mention the refreshments stand run by Peter Davies’s wife, June, with all the proceeds going to charity.

Here was a charming and timeless snapshot of what happens when devotees of a great British hobby pool their enthusiasm into a good cause — with a nice cup of tea and a slice of cake thrown in. 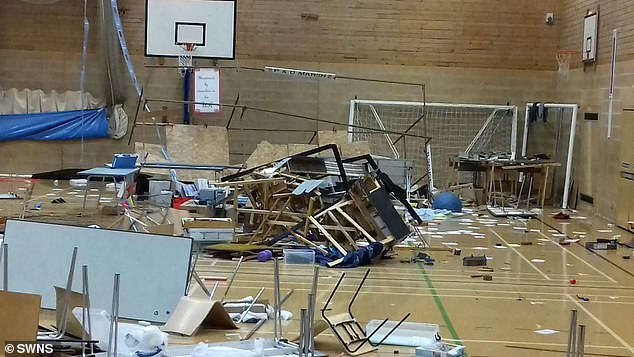 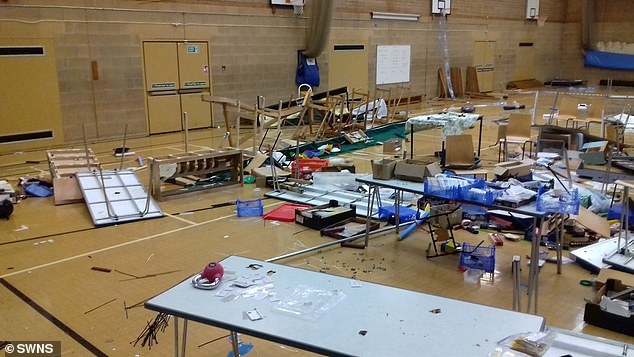 Some of these ‘layouts’ had taken decades to create — and were still a work in progress. That’s the thing about a model railway. There is always an extra branch to add, an extra piece of scenery or signal box to make. It is never quite finished.

Except, all this was finished with a shocking degree of brute force. A gang of youths broke in and ripped the displays apart, tearing up buildings and landscapes which had been lovingly put together over many years.

A metal goal post was rammed through a control box and several tables. Hammers had been removed from members’ toolkits to inflict further damage. ‘They were hitting the layouts so hard that the head came off one of the hammers,’ said Peter Davies.

When members arrived shortly after 7am to put the finishing touches to their pride and joy, they found their way barred by the police. They later learned officers, accompanied by a police dog, arrested three 15-year-old boys and a 16-year-old. The youths have been released pending an investigation for burglary and criminal damage.

Even now, some club members cannot quite articulate the shock of what they discovered. Years of intricate craftsmanship had been systematically smashed to a pulp. ‘I’m afraid a lot of grown men shed a lot of tears,’ Mr Davies says.Some of his colleagues are still too distraught to speak.

One man from St Neots had spent 25 years building what Mr Davies describes as a ‘brilliant’ LMS Black Five steam engine. If it had been put on the market, he says, it would have fetched upwards of £8,000. Except that it would never have occurred to its owner to sell it.

‘To him, it was priceless. And now it is just a piece of junk — or rather many pieces,’ he added. 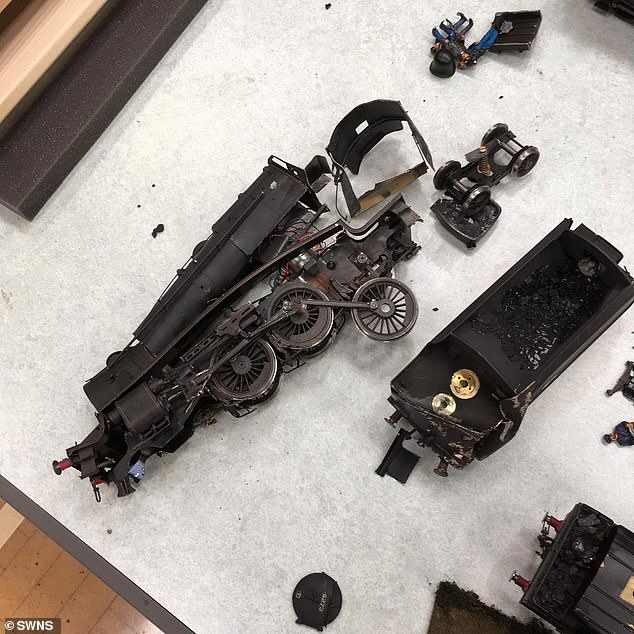 Yesterday evening the members were regrouping at club headquarters in a converted farm building in the Lincolnshire countryside.

Monday night is ‘club night’ and there was a bumper turnout of the 40-strong membership.

The shock of discovering that so many years of hard work had been destroyed had been eclipsed by the greater — and happy — shock at the worldwide reaction.

‘Just have a look at this one,’ said club president Colin Brown,86, showing me a new email and shaking his head in disbelief. It was from a chap called ‘Vern’ in Australia, offering an entire train set which had been in the family for years.

Colin could still remember his own first train set as if it were yesterday. ‘It was a Hornby 0 Gauge clockwork loco and coaches,’ he told me proudly. Did he still have it? ‘Sadly not. Mr Hitler did for it when he bombed our house in 1943,’ Colin laughed.

There was something of a Blitz spirit ahead of last night’s meeting. The club has promised to produce a display for this weekend’s Deepings Literary Festival to accompany a lecture on John Betjeman’s railway poetry.

‘We’ve said we’ll be there and we will be,’ said Bill Sowerby, 74, the club’s ‘exhibitions manager’.

So the club has just dusted off another layout — which was not part of last weekend’s fateful exhibition — and they were busy getting it ready yesterday afternoon.

Meanwhile, a woman in Canada has offered £1,000, even though she is not even a model railway enthusiast. For many people, this was not just an assault on an amateur exhibition in a provincial sports hall. It was an attack on a delightful and thoroughly benign slice of British life which so many of us hold dear.

Many people have contributed in honour of a father or son or brother who is (or was) a railway nut. Even the name — Market Deeping — sounds like something from a Betjeman poem.

Yes, Saturday’s events have been a depressing reminder of the nihilism which can pass for entertainment among a moronic sub-section of society.

Long after Saturday’s damage is forgotten, however, we will remember the outpouring of sympathy and support which followed it.

For here is an endearing reminder of an eternal truth: you can never be too old — or too famous — to enjoy the thrill of a train set.