‘Absolute cretins… incompetent Neanderthals’: Model, 24, whinges about being ‘trapped’ in Australia and missing her flight to New York because she left her visa application too late

An Australian model who lives in New York has called US Embassy workers ‘absolute cretins’ after being left stranded down under because she failed to get her visa approved in time.

Talia Richman, 24, uploaded a series of furious Instagram stories for her 114,000 followers after she was confronted with a series of legal hurdles to get her visa.

The Perth-raised model, who was most recently linked to Kendall Jenner’s ex Ben Simmons, also described US Embassy workers in Australia as ‘Neanderthals’ after missing a flight she booked due to delays with her paperwork.

The Perth-raised model, who was most recently linked to Kendall Jenner’s ex Ben Simmons, described US Embassy personnel in Australia as ‘absolute cretins’ and ‘Neanderthals’

‘I would like to give a personal shout out to the US Embassy offices of Australia for being absolute cretins,’ she said.

‘Like, legitimately, incompetent Neanderthals. They need to be fired, cancelled and blocked immediately,’ she added.

The 24-part Instagram rant was based on Richman’s discovery that there is currently a two to three-month waiting period for visa interviews.

She booked a flight back home to New York for next week and was disgruntled that there was nothing she could do to speed up the visa approval process.

While she seemed frustrated during the video, she flashed a smile and laughed off the situation repeatedly, seemingly making light of being ‘stranded’ in her home country.

The 24-year-old was sitting in an airport waiting for a last-minute flight to Perth when she recorded the clips in a final effort to make it back to New York by next week. 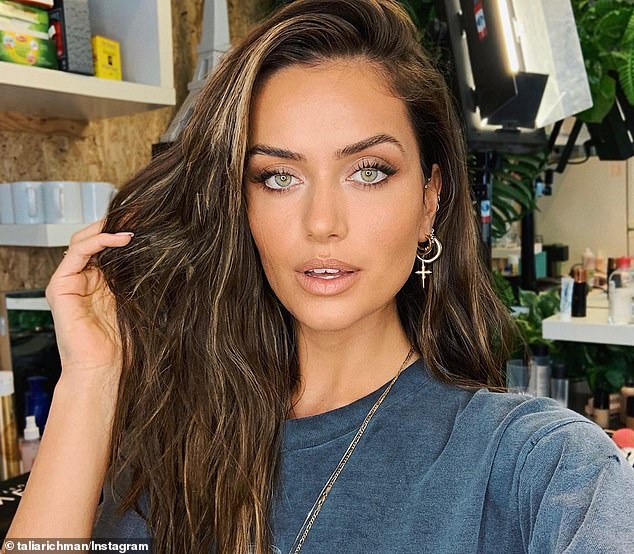 ‘I’ve become that person that asks to speak to the manager,’ she said. ‘I got heated, like verbal abuse on the phone.

‘I’m feeling deported, stuck and trapped here in Australia. Not that that’s a bad thing, but I miss my puppy,’ she said.

In an attempt to speed the process along, Richman found the US Embassy in Perth had a shorter waiting time and initially posted all of her legal documents there to get them approved.

But shortly after she sent them all off, she discovered there was an interview spot open later that day (Wednesday) so she booked the next available flight to make the appointment, forgetting that she no longer had her documents on her person. 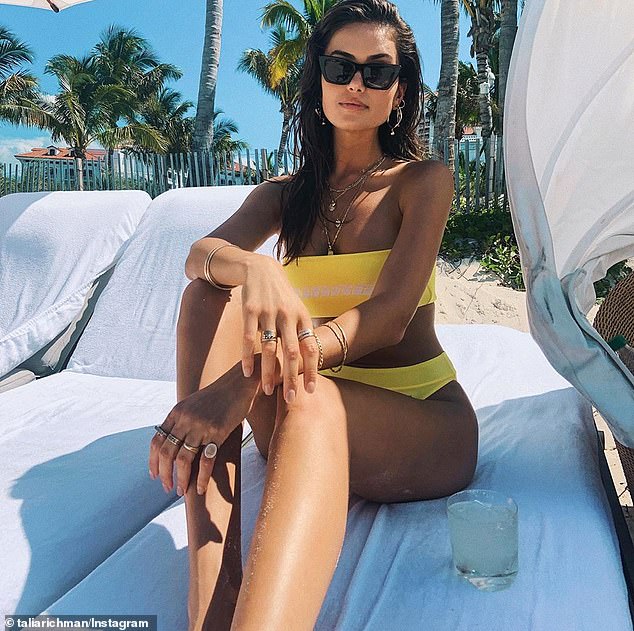 Again, she called the Embassy, who said the documents probably wouldn’t arrive until the next day and that she was unlikely to get approved without them.

‘The Neanderthals call and say its not supposed to arrive until later, so my plan is to rock up, talk, schmooze and flirt my way into them giving me my visa.

‘But, miraculously my documents arrived back at my house this morning by the post, despite the idiot on the phone at the Embassy saying they were on their way.’

Richman is now on her way to Perth with high hopes her visa will be immediately approved so she can be on her way back to New York to continue working.

She apologised to her fans and followers for the long rant, and said she ‘needed to get it out because I’m abusing innocent contractor, phone people instead.’