Model who spent $100,000 on nine boob jobs has her implants removed after they ‘made her ill’

Bobbi Billard, a glamour model and former wrestler from Las Vegas dropped from a DD-cup to a B-cup after having the surgery and says she feels healthier than ever.

Now aged 43, she had her first operation when she was just 18 but needed another eight surgeries when she suffered complications from the implants.

Last year she realised one of her breasts had become swollen and warm to the touch, and was eventually told it was infected.

After antibiotics failed to resolve her problem, Ms Billard believes she had the mysterious condition breast implant illness and decided to have the implants removed last month.

Bobbi Billard, 43, is a glamour model and former professional wrestler. She had nine operations in a bid to keep her larger breasts but she struggled for years with complications 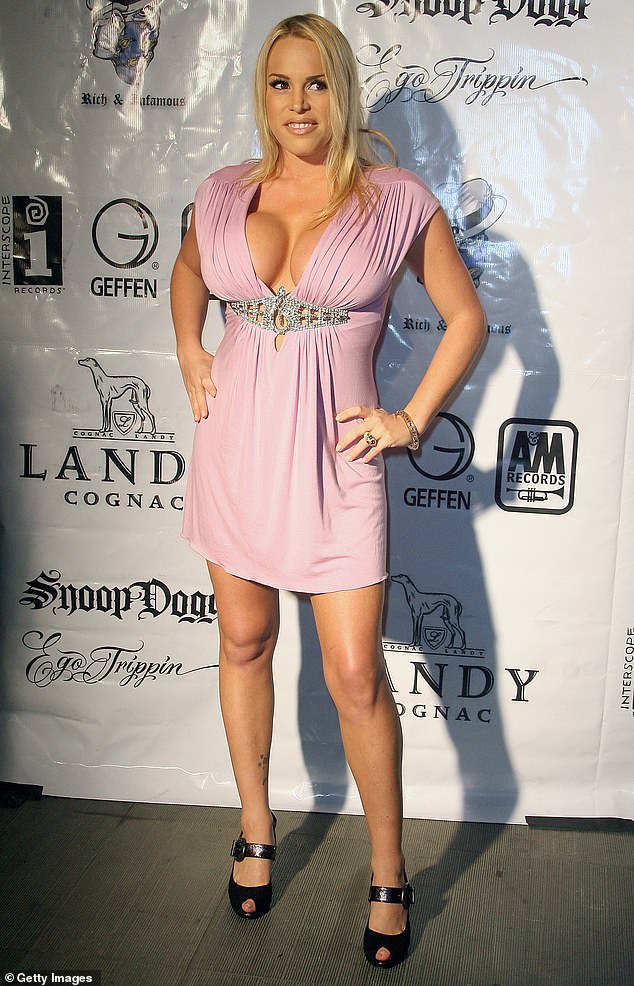 Ms Billard (pictured in 2008, aged 32) first had breast enlargement surgery when she was 18 in 1993, which gave her DD breasts. But she said she suffered with capsular contracture, which happens when the immune system reacts badly to the implants

‘I felt like I was being poisoned from the inside out,’ she said.

‘After over two decades of having breast implants I think my body decided enough was enough.’

Ms Billard had been struggling for years with a complication called capsular contracture, in which the immune system attacks the implants and can cause scar tissue to build up.

She suffered for years from fatigue, chronic neck and back pain and now believes it was linked to her breast implants.

There are growing numbers of women reporting their breast implants make them ill – a condition dubbed breast implant illness, although this isn’t recognised by health authorities in the US or UK.

And last summer, Ms Billard said one of her implants was ‘trying to force itself’ out of her body. But, she claims, doctors dismissed her for six months.

‘I’d spent a small fortune over the years, $100,000, as I was constantly trying to correct my capsular contracture,’ she said.

‘Each surgery cost no less than $10,000 but I made my money as a model which required me to look a certain way and had no choice but to keep getting surgery to fix them.

‘But by 2019, which was 26 years after my first operation, I decided to explant and have my implants removed after years of suffering from an unknown illness.

‘I had no energy, dark circles around my eyes, chronic neck and back pain, joint pain and itching eyes just to name a few.’

After he breast became more swollen and painful Ms Billard was given antibiotics but they didn’t help, so her surgeon drained the swelling and sent the fluid for testing. 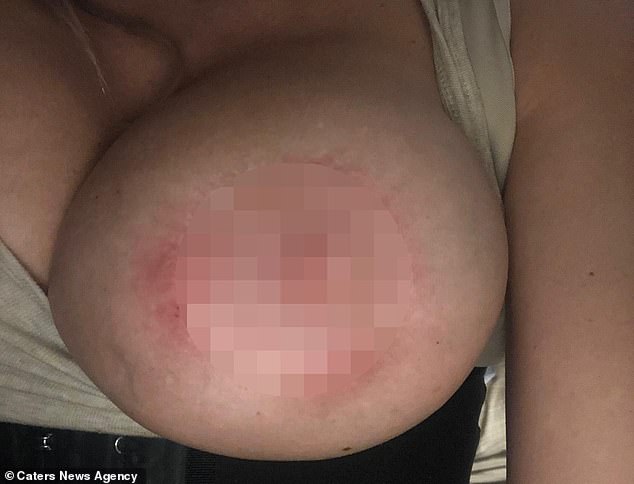 Ms Billard said one of her breasts became swollen and sore (pictured), which was when he surgeon decided to drain the fluid building up around the implant, suspecting an infection 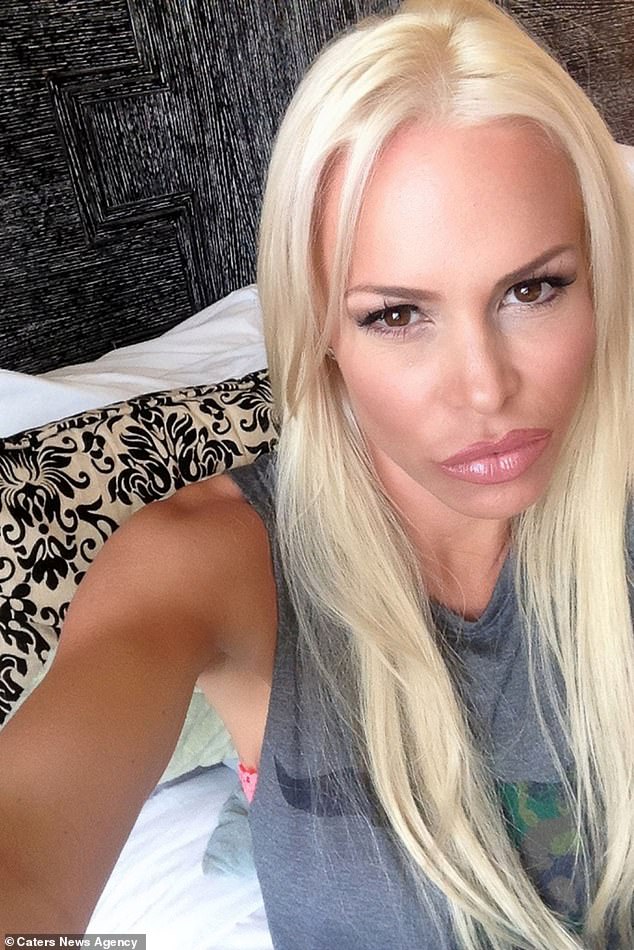 Miss Billard researched her symptoms online and believes she had breast implant illness, a condition not recognised by health authorities in the US or UK but which many women report experiencing 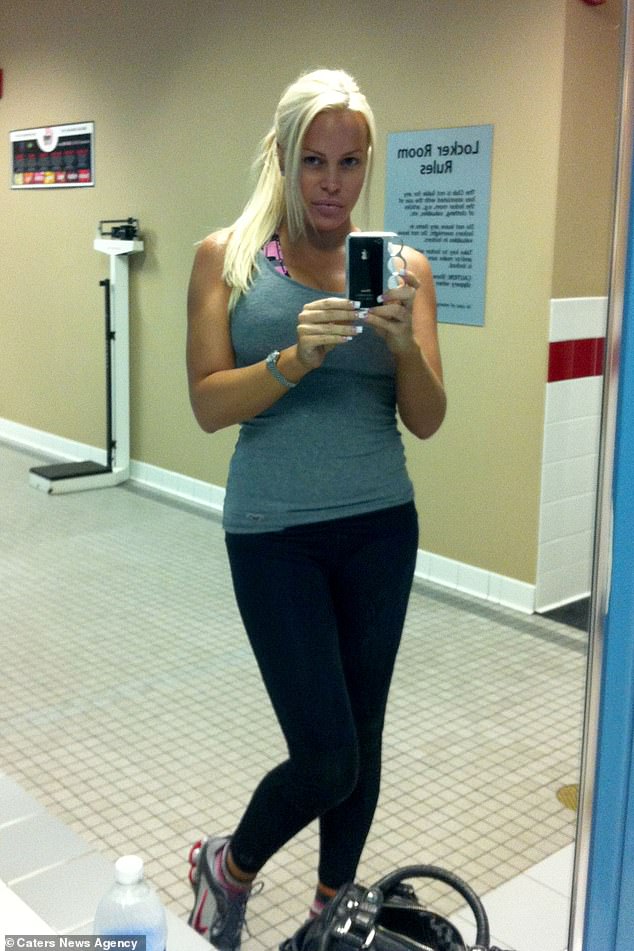 Miss Billard said she suffered for years from fatigue, chronic neck and back pain, which she now blames on her breast implants, which have since been removed 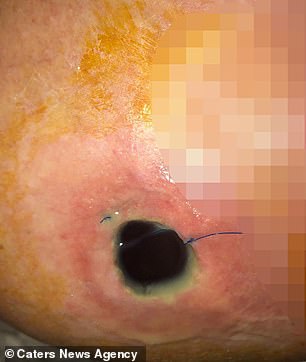 The wound made by the drain later reopened and left her feeling exhausted, nauseous and with an aching body while ‘looking like she had a gunshot wound’.

Ms Billard said she never found out what type of infection she had, but decided in February to have her implants removed.

‘It wasn’t until researching my symptoms online and finding the Facebook group that I realised that I had [breast implant illness],’ she said.

‘It’s incredible that plastic surgeons are taking the same type of approach as cigarette companies once did, saying their products have no negative health ramifications.

After Ms Billard found a Facebook group online called breast implant illness she says she began to understand the condition and her symptoms finally had a cause.

She added: ‘There was no doubt that my mystery illness was being caused by my breast implants.

‘After explanting I went from a DD to a B-cup and while the recovery to rejuvenate my breasts is a work in progress, for the first time, I am happier, wiser and on the road to being the healthiest I have ever been.

‘I’m not going to lie, my breasts do look like shrivelled raisins but I am learning to love and embrace my new figure.

‘Even after my bad experience with breast augmentation surgery I am not against breast implants or plastic surgery as long as it is done after being fully informed about the risks.’

Ms Billard claims she was not aware of the dangers of breast surgery despite undergoing nine operations in total.

She added: ‘I cannot recall one plastic surgeon telling me that breast implants can cause problems if they haven’t even ruptured in the nine breast surgeries I had.

‘It’s up to the patient to keep track of the devices put into their bodies which many are unaware only last 10 years – they don’t last a life time.

‘No one really knows what chemicals are used to make implants or the implications these have.’

Breast implant illness is not recognised by the US Food and Drug Administration (FDA) or the NHS, but has reportedly been suffered by many women. 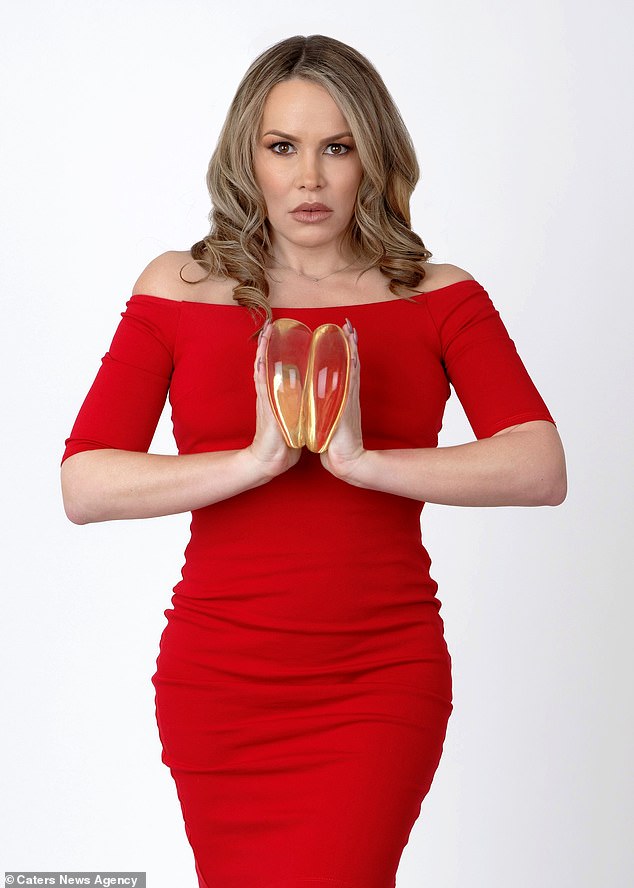 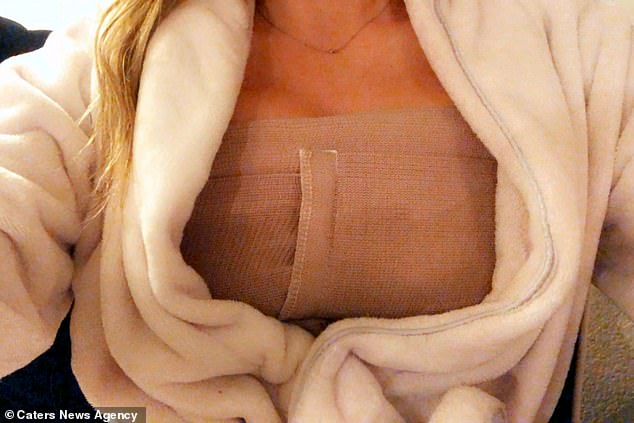 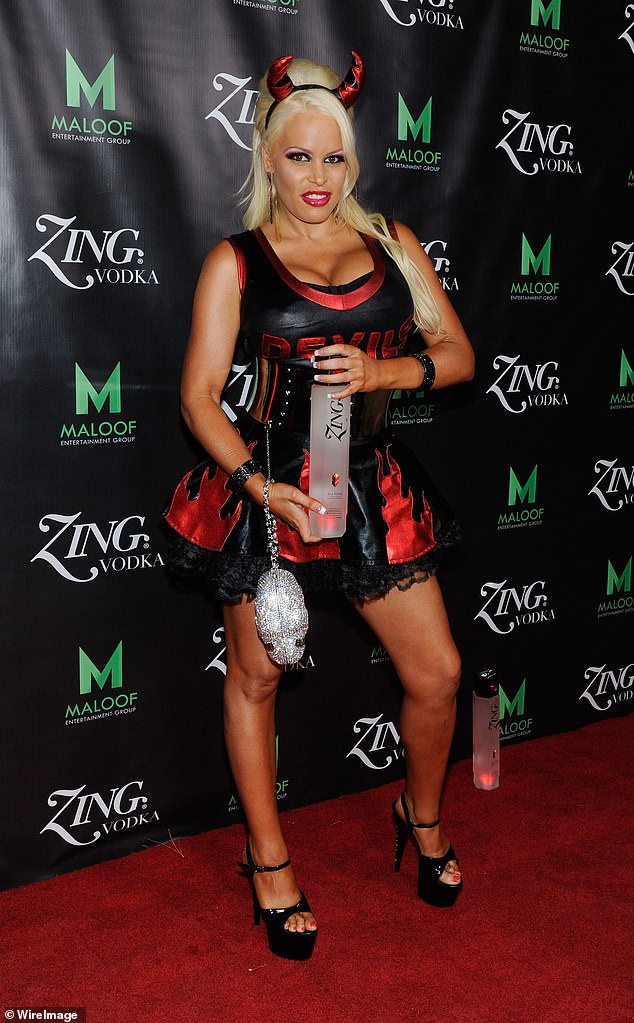 Ms Billard, pictured at a party in Las Vegas in 2012, said: ‘I haven’t had any headaches and my eyes don’t itch or burn as much. I know all of this is because I have explanted and I’m so happy I have’

More than 67,000 people are subscribed to a ‘Breast Implant Illness and Healing’ Facebook group.

The former model for Playboy said: ‘Many plastic surgeons don’t believe in explanting as they think it’s in people’s minds.

‘The Food and Drug Administration [FDA] recommends getting regular MRI’s of breast implants to check for silent rupture. Breast implants degrade and break down over time.

‘The first thing I noticed after surgery was that my back and neck pain was instantly better. I felt lighter on my feet.

‘I haven’t had any headaches and my eyes don’t itch or burn as much. I know all of this is because I have explanted and I’m so happy I have.’