A model who shot to fame for her jet-black monobrow has admitted she receives ‘a lot’ of death threats online for her bushy facial hair.

Cypriot-born Sophia Hadjipanteli, 22, who emigrated to London and then the US, said she’s bombarded with abuse online for her eccentric features.

Appearing on Good Morning Britain today, the University of Maryland marketing graduate, who boasts 292,000 followers on Instagram, admitted she tries not to read the negative comments – and takes solace in the fact her boyfriend loves it.

‘I get a lot of death threats,’ she told stunned hosts Susanna Reid and Piers Morgan.

Cypriot-born Sophia Hadjipanteli, who emigrated to London and then the US, said she’s bombarded with abuse online for her bushy monobrow 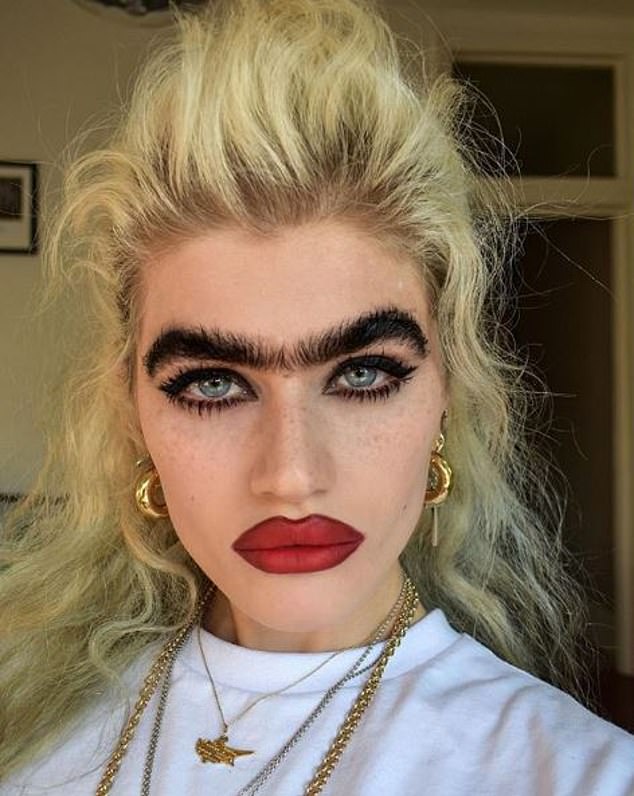 The 22-year-old University of Maryland marketing graduate boasts an incredible 292,000 followers on Instagram

Sophia, who has posed for Vogue Italia and Rihanna’s SAVAGE X FENTY collaboration, continued: ‘I try not to read a lot of them, a lot of people tell me when I get them so obviously I don’t really have the patience to go through and read every person’s comments.

‘It’s a bit of a shame when you want to read the nice ones, to have to go through all the mean ones, but it’s worth it I think.’

Piers, 53, who admitted her unibrow is ‘weirdly beguiling’ in the flesh, said he found it ‘absolutely disgusting’ that people would want to kill her because of her eyebrows, while Susanna, 48, urged people to ‘get over themselves’.

Asked whether her boyfriend Zac Apostolou, a London-based photographer, is a fan of her monobrow, Sophia said: ‘He loves it. 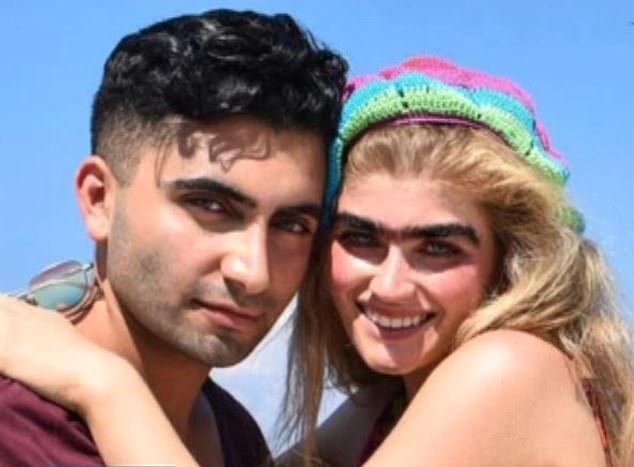 Sophia said her British boyfriend Zac Apostolou, a London-based photographer, loves her monobrow as he used to have one himself

‘He had a monobrow when he was little as well. I tint my eyebrows, I naturally have quite dark eyebrows but not this dark, so whenever I’m tinting them he always gets so interested in what I’m doing.’

The natural blonde admitted the striking appearance of her brows was enhanced back in 2014 when she tried tinting them and accidentally dyed them black.

But rather than rush to correct them, Sophia embraced her unusual new feature and has gone on to make a career out of it, landing a contract with a British modelling agency. 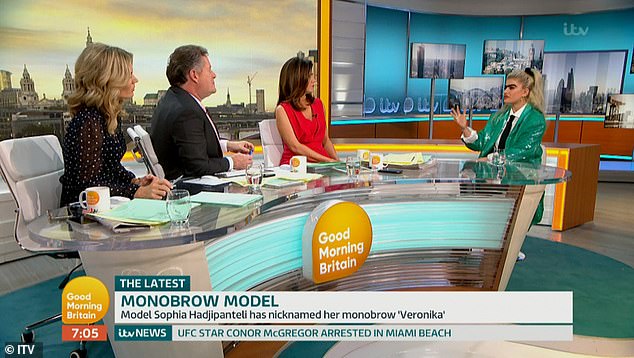 Sophia admitted she gets death threats from vile trolls online which shocked and appalled the Good Morning Britain host, with Piers Morgan branding it ‘absolutely disgusting’ 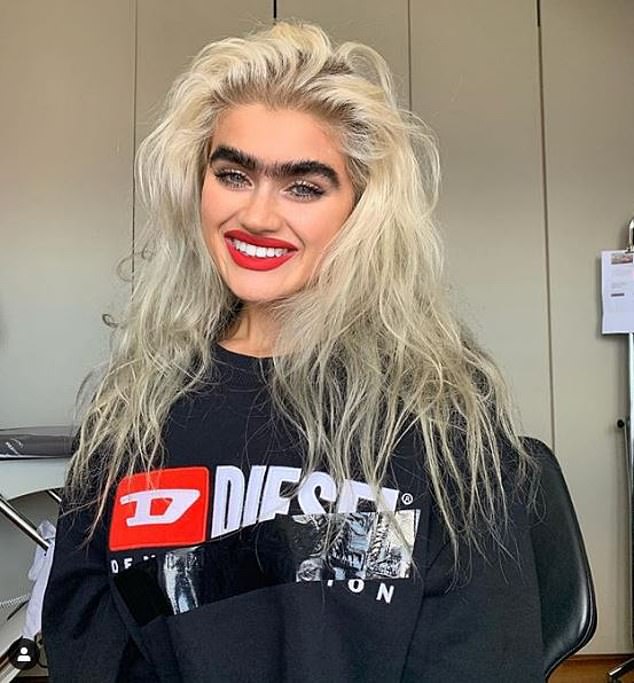 She hopes her unibrow movement and body positive message will inspire others and even uses the hashtag #UnibrowMovement in her Instagram bio.

She previously told The Cut: ‘I really wanted to push people to look at me and to look at a unibrow – which they’ve been conditioned to think it’s kind of weird and something you should get rid of – for them to still say that I was beautiful with this textbook ‘unattractive’ thing.’

Dressed in a sparkling green blazer and white shirt with a black tie and scrunchie to match her striking brow, Sophia said that while people are initially shocked by her monobrow, it tends to ‘grow on you a bit’.

She explained: ‘I’ve always been quite eccentric with my outfits and I love changing my look. 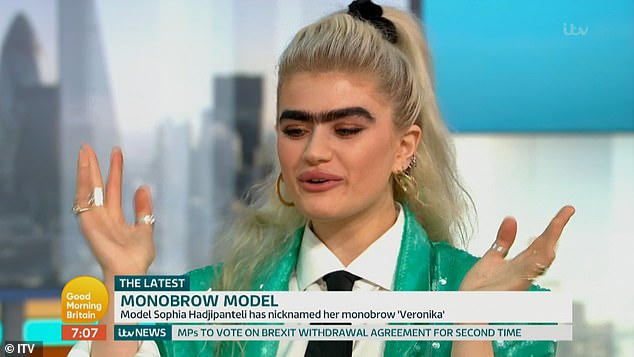 Dressed in a sparkling green blazer and white shirt with a black tie and scrunchie to match her striking brow, Sophia said that while people are initially shocked by her monobrow, it tends to ‘grow on you a bit’

‘I never really based my self-confidence on how others treated me, because at school I was bullied at lot for things that were not focused on my face – my outfit, having parents that were immigrants, we didn’t speak English, being the smallest in my class.

‘Growing up in a conservative area of Maryland, being different isn’t really accepted so that – I hate to say bullying – but I think that sort of challenged me.’

Sophia admitted she receives a lot of negative reactions out on the street but the majority of abuse targeted towards her comes from online trolls. 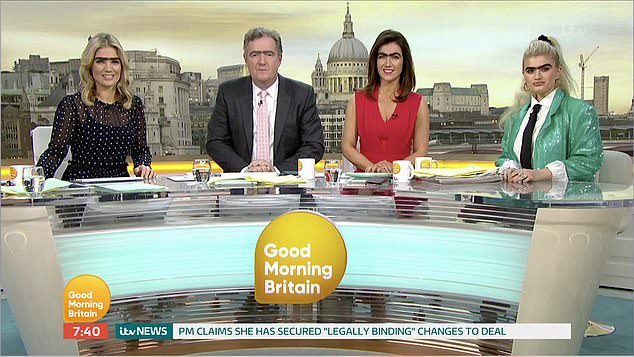 ‘In person people are just a bit unsure of how to take it, because I think it’s odd to see someone like me walking down the street,’ she said.

She puts her bushy facial features down to genetics, telling Teen Vogue: ‘My mom always told me it’s good to have thick brows because she plucked her thin ones off in the nineties when pencil brows were in.

‘I definitely wanted shaped pointy brows when I was 15 or so, but thick bushy brows got trendy around then and I figured it was more “me” to grow them out.’