Modern classic hot hatches that are selling for stellar sums

Hot hatchbacks from the eighties, nineties and noughties are now seriously hot property, with recent sales highlighting the huge spike in values for this genre of car.

Some stunning examples of these vehicles sold for eye-watering sums in recent weeks and months, with enthusiasts bidding over £70,000 for performance variants of family hatches from previous eras.

We take a look at five examples that have changed hands for astronomical figures when they went under the hammer in virtual auctions.

Proof that hot hatches are hot property: These five motors have been sold for big fees by Collecting Cars in the last year as demand for hot hatches from previous eras continues to soar

Recent sales have proven just how desirable the hot hatchback has become.

The most modest of all performance cars, they combine family-car practicalities with scintillating speed and driving dynamics.

And many of them from our past are now incredibly collectible – and selling for big sums.

Some of the boom is as a result of the success of a new breed of online-only auction businesses, dedicated to collectible modern-classics providing a new avenue for motors to change hands.

One of these, Collecting Cars, has provided This is Money with details of five hot hatches that have been bought via its website recently for astonishing figures.

The site, alongside similar platforms including The Market and Car and Classic, has offered collectors the chance to get their hands on existing and future classic motors with greater easy and frequency.

However, while access to desirable motors has increased, so have values, according to market experts.

Hagerty, which specialises in classic car insurance and tracking values, says it has recently completed an in-depth research into online timed auctions and found evidence of them pushing prices higher.

John Mayhead, editor of the company’s Price Guide, told us: ‘When we looked at our data from the biggest platform we track – Bring-A-Trailer in the USA – our team found that there is a real uplift in values of around 8 per cent.’

This might be a reason why these five hot hatch examples have sold for big figures, in most cases well above their average values. 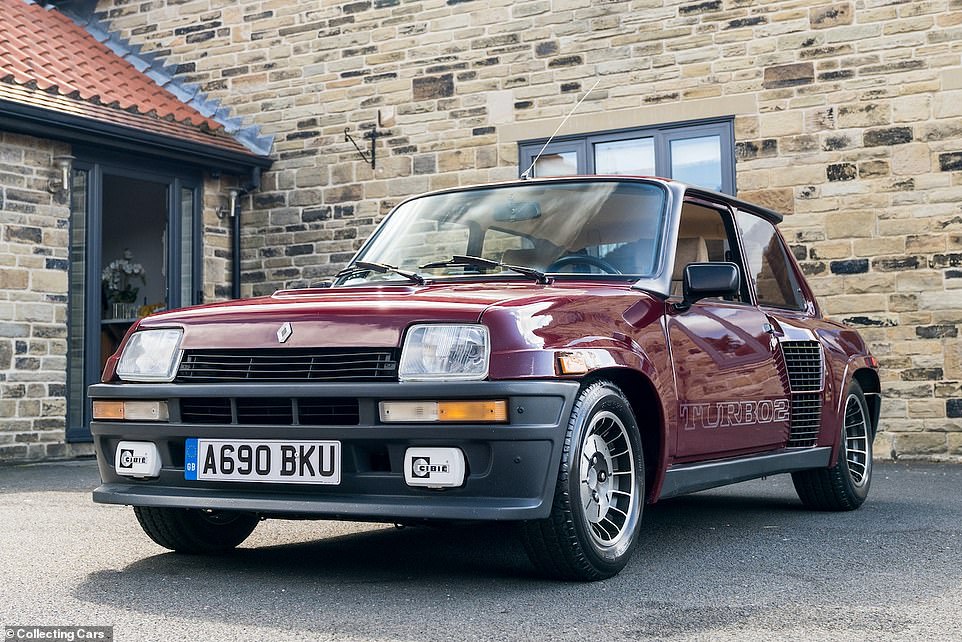 This Renault 5 Turbo was sold by Collecting Cars a couple of months ago for £84,000, which is well over the average value 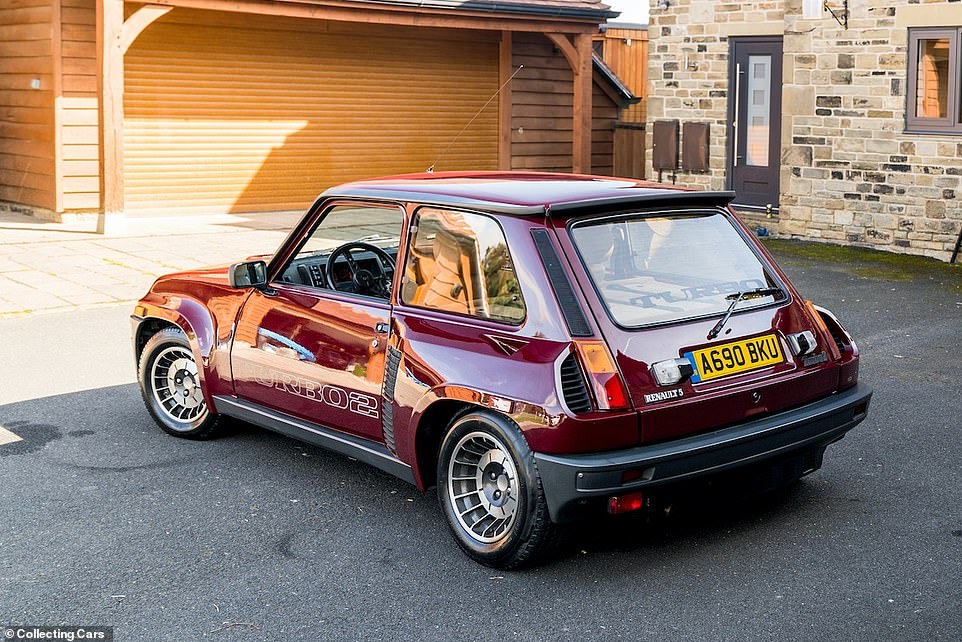 Highly original and low mileage, this version sold by Collecting Cars in September drew plenty of attention. The record price paid for one was set in the US in 2019

A highly original and well-presented example of the idiosyncratic 1980s Renault 5 Turbo 2 hot hatch went to the virtual block with Collecting Cars in September.

With a mere 27,194km (almost 16,900 miles) on the clock, it is a cherished example of the iconic road-going Group B rally machine from the generation.

It is as incredibly loud to driver as it is ferociously fast, with the turbocharged 1.4-litre engine mounted directly behind the front seats.

This example produces around 185bhp with the factory Stage 2 tune, driving the rear wheels through a five-speed manual transmission.

In superb condition with recent MOT and fitted with various mod-cons like electric windows and a heated rear screen, this second-generation Renault 5 Turbo ‘2’ is a rewarding driver’s car and has bags of Gallic character. 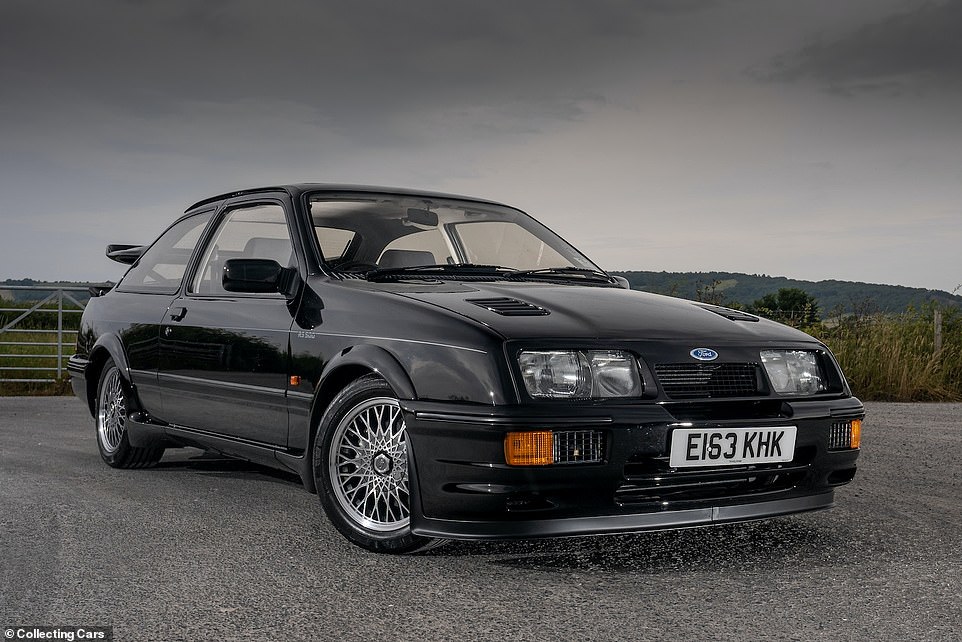 Fast Fords from this era are big money these days, and the Sierra RS500 Cosworth is the one that’s setting the most records with collectors paying six-figure sums for the best examples 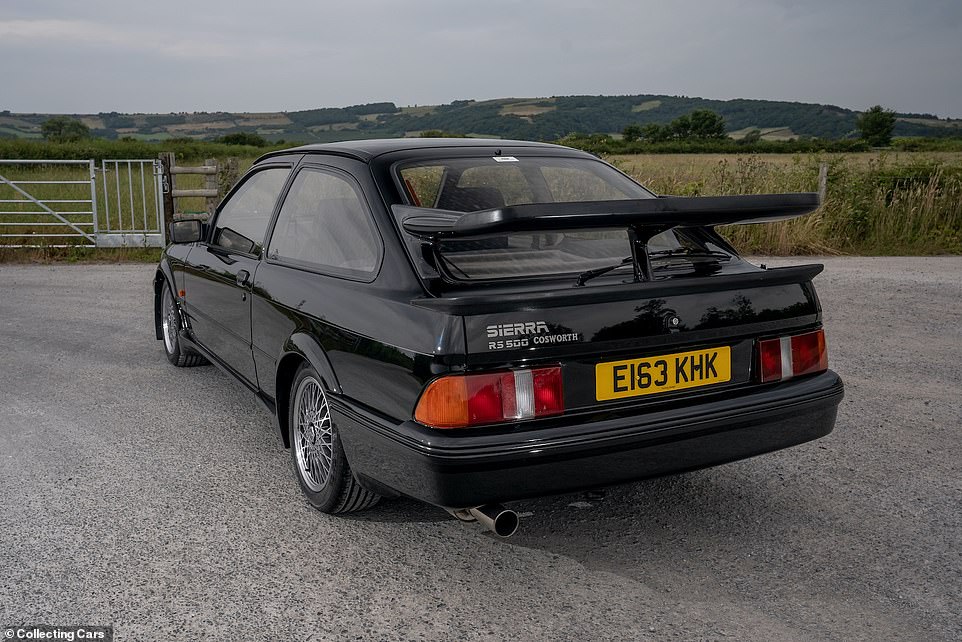 Fast Fords with the Cosworth moniker from previous eras are big money across the board these says, with the Sierra RS500 Cosworth – once a ‘blue collar’ performance hero – now a bona fide collectible asset.

Created to help Ford continue its success in the European Group A racing series, the RS500 was an evolution of the already impressive Sierra RS Cosworth and features a turbocharged 2.0-litre inline-four engine producing around 224bhp and 204lb-ft of torque.

The strategy was a clear success, with the racing version of the RS500 taking home wins in the 1988 DTM championship, the 1989 Spa 24 Hours and the 1990 British Touring Car Championship, to name just a few of its victories.

That’s impressive, though some examples in recent years have bust the six-figure mark, with one in sold for £122,400 back in 2017. Yet Hagerty says average values are just under £50,000 for this particular motor. 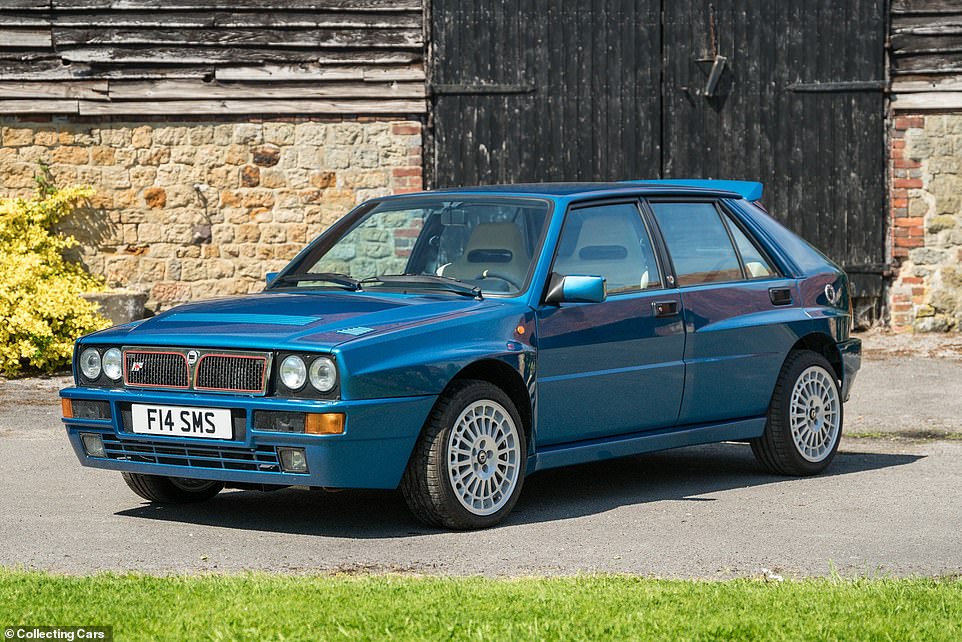 Arguably the greatest homologation special, the Lancia Delta Integrale Evo II was the closest thing you could buy to a World Rally Championship car for the road 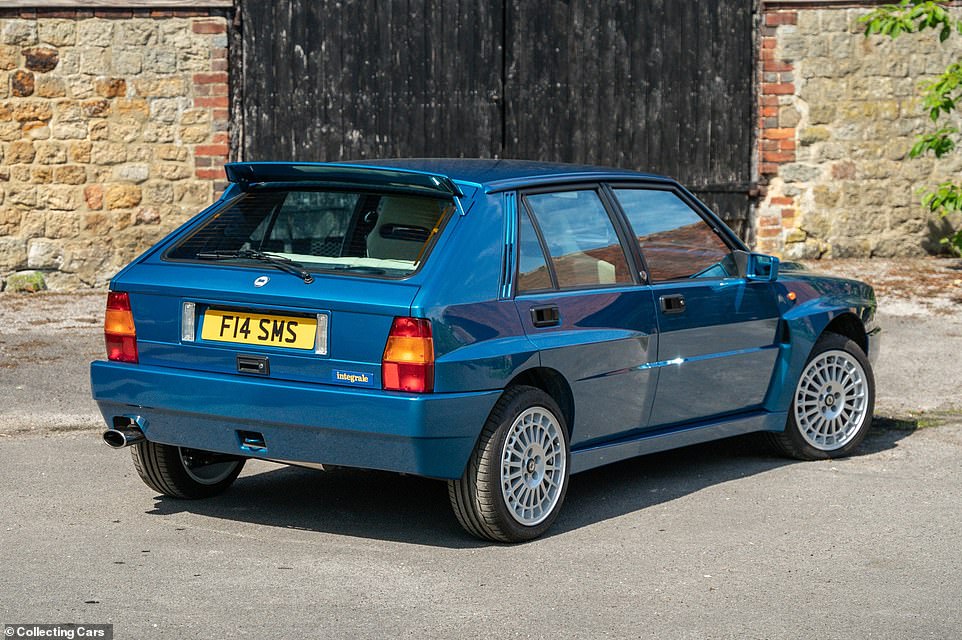 The Lancia Delta Integrale Evo II is recognised as one of the homologation special greats. The last of Lancia’s rally cars for the road that would be the basis for the competition model that was still dominating the World Rally Championship at the end of the Delta’s run.

Not to be confused with standard examples, this limited edition version of the Lancia Delta Integrale Evo II is sought after by collectors and marque enthusiasts.

This ‘Bleu Lagos’ car is one of just 215 worldwide and, when sold this summer, represented a rare opportunity to acquire a coveted modern classic that’s almost guaranteed to go up in value in the future.

Under the bonnet is the 2.0-litre turbocharged 16-valve four-cylinder engine, with four-wheel drive through a five-speed manual transmission. 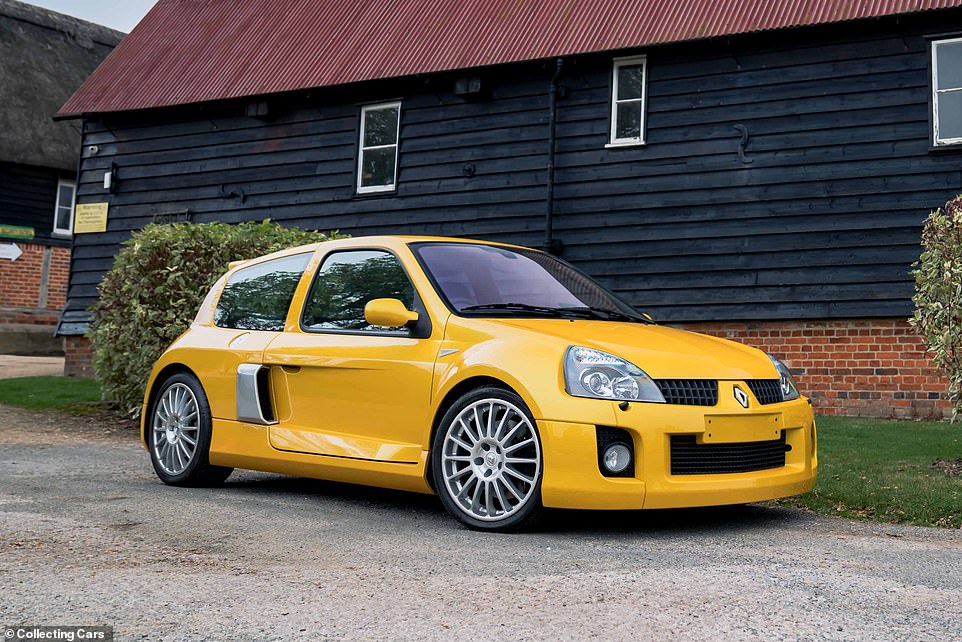 This Renault Clio V6 Phase II is the most expensive version to ever sell at auction, with Collecting Cars selling it for £73,000 just last month 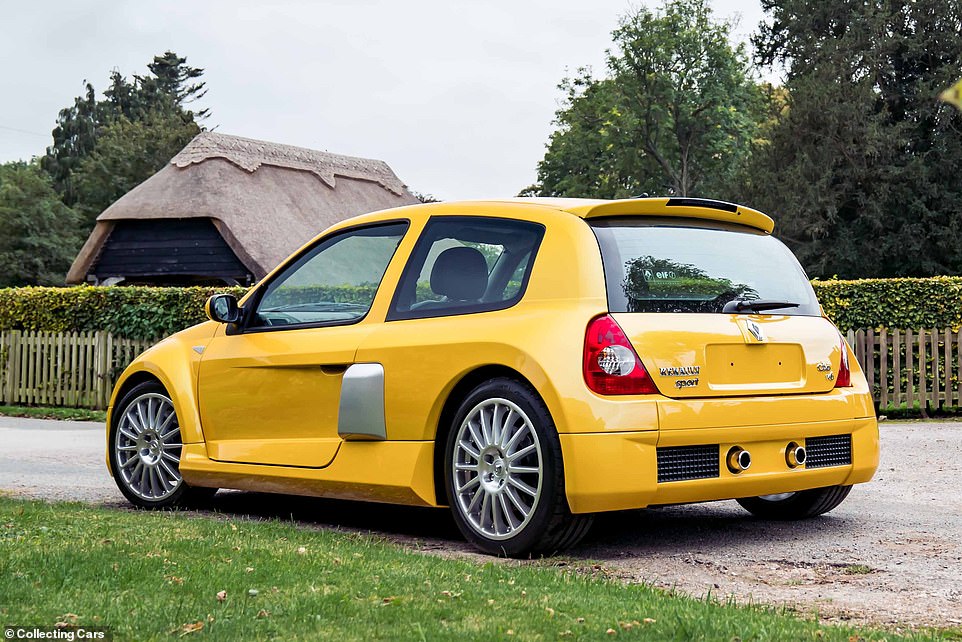 The 2005 Renault Clio V6 was bought on Collecting Cars for a winning bid of £73,000 – some £60,000 more than what Hagerty says is the average value for one of these cars and the most anyone has forked out on any Clio V6 variant.

And this one is something on an astonishing example in true ‘timewarp’ condition.

Showing only 980 miles from new, you will struggle to find another example that’s been used as little as this.

It is also one of only 18 cars delivered to the UK in Liquid Yellow, making it a particularly rare and collectible modern classic.

Featuring a longer wheelbase and wider track compared to its predecessor, the Phase II model also produces an additional 25bhp from its 255hp 3.0-litre V6, mounted just behind the driver and powering the rear wheels via a six-speed manual transmission.

Prospective owners of any collector car are often told to buy the best example they can afford, and this particular Clio V6 is among the very best of all. 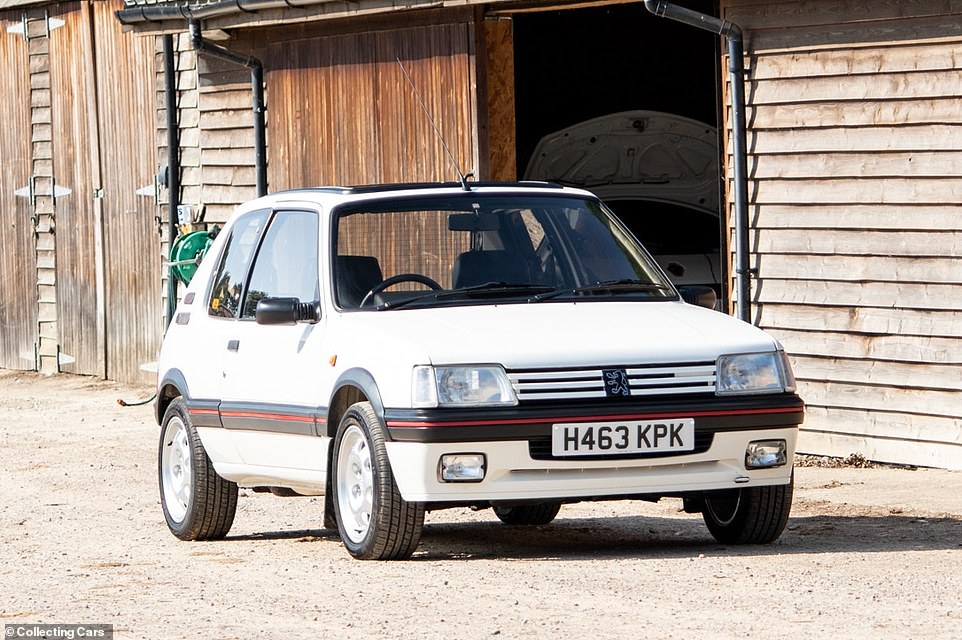 This Peugeot 205 GTI 1.9 sold by Collecting Cars in August is some way off the record price – and also below the average Hagerty Price Guide – but shows how valuable they’ve become 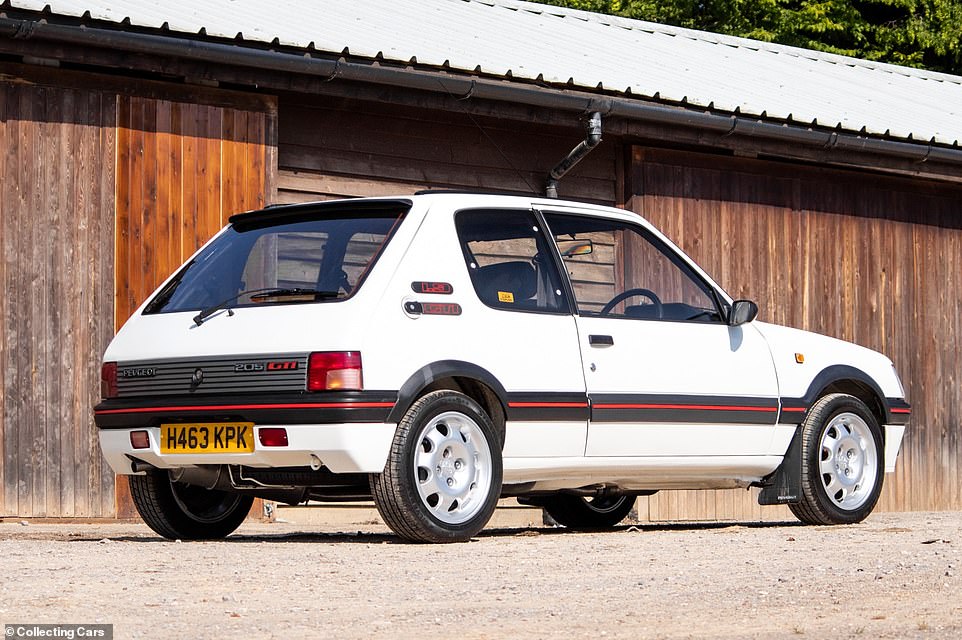 Biggest figures are paid for ultra-exclusive versions and those with exceptionally low mileage. Thought this standard model with 63k on the clock still hit £18,000

While this example of arguably the great hot hatch of all time, the Peugeot 205 GTI, sold recently for less than the average Hagerty Price Guide value , it shows how collectible the rapid French supermini has become.

While the version sold by Collecting Cars in August is highly original, it has had a full engine recommissioned and covered over 63,000 miles. While that is way below average mileage for a piece of motoring history, there have been lesser-used models sold in recent times.

This one was in excellent condition considering age and use.

Cosmetic improvements undertaken during the restoration include stripping and powder coating the front sub frame, suspension assemblies and other components. The underbody was also stripped and repainted, including repairs to the boot floor.

Under the bonnet is a fully rebuilt 1.9-litre inline-four, which produces up to 126bhp and drives the front wheels via a five-speed manual transmission.

Even with average values so high, it is a model that’s destined to appreciate in coming years.

The record figure paid for a 205 GTI 1.9 was achieved in an Artcurial sale in April 2018. That was a limited edition ‘Griffe’ version, of which just 20 were ever built for the Dutch market.