A tailor from East Sussex has revealed how he decided to shun modern fashion after burning his only pair of jeans aged 14 to become a modern day dandy.

Zack Pinsent, 25, has only worn Regency and historical clothing for the past decade and says it is the only way he feels comfortable in the 21st century.

Typical daily looks for the self-styled man include a pair of knee-high riding leather riding boots, a floral waistcoast and riding jacket with long tails.

Zack, who lives in Hove, has gained a huge online following with close to 40,000 adoring fans keeping up to date with his period tailoring.

Zack Pinsent, 25, pictured, has only worn Regency and historical clothing for the past decade and revealed that he made the ‘symbolic decision to burn his only pair of jeans at 14’ 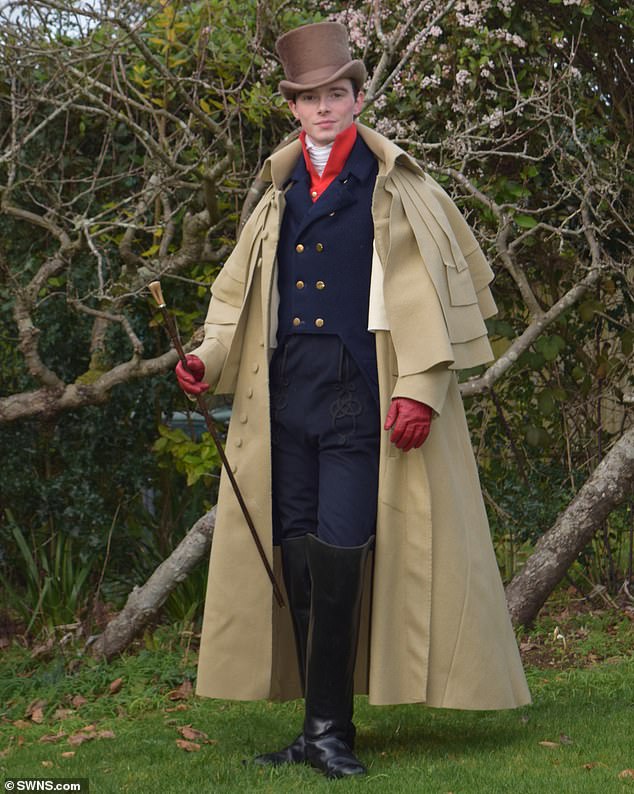 The tailor from Hove, East Sussex, researches all of his looks before sourcing the material and designing them. Some of Zack’s styles can take one year to create properly

He said: ‘It’s hard for men, we can’t show exuberance but I love what I do and I’m only doing it for my own enjoyment.’

His obsession with historical wears started when his family moved home at age 14 and they came across a box full of Zack’s great-grandfather’s old suits.

Luckily for Zack’s period clothing fitted him really well and he began to wear them as much as he could.

He said: ‘At 14 I made the symbolic decision to burn my only pair of jeans in a bonfire, it was a real turning point.

Zack’s obsession with historical clothing started when his family moved home and they came across a box full of his great-grandfather’s old suits, which fit the then teenager really well 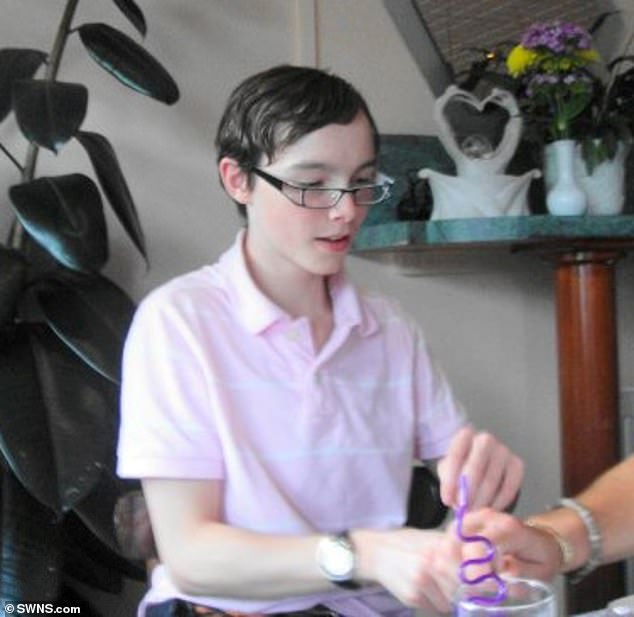 Zack, pictured in modern clothing aged 14, explained how he used to wear three-piece suits on non-school uniform days but started to dress in historical clothing every in sixth form

‘On non-school uniform days I would dress in three piece suits, but when I got to sixth form I started to dress in historical clothing every single day.

‘I was quite surprised that in the leaver’s book I was voted as the best dressed.

‘People weren’t necessarily saying that to my face but it was clear that there was an under current of respect.’

It has now been at least a decade since Zack has worn any modern clothing, the only time he can remember is being invited to a 1980s themed party. 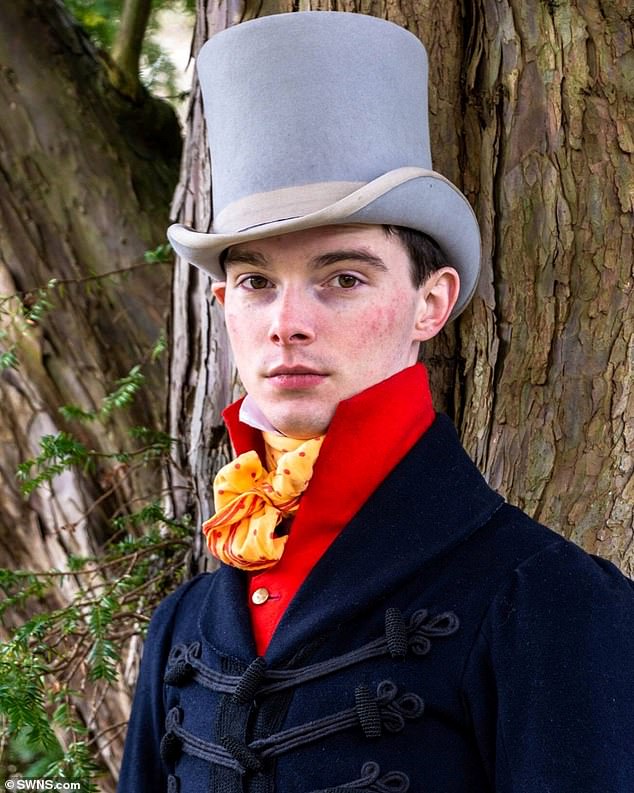 The tailor, pictured, said: ‘I love what I do and I’m only doing it for my own enjoyment’

It has now been at least a decade since Zack, left at 14 and right now, has worn modern clothes and he said the reaction to his look is usually good 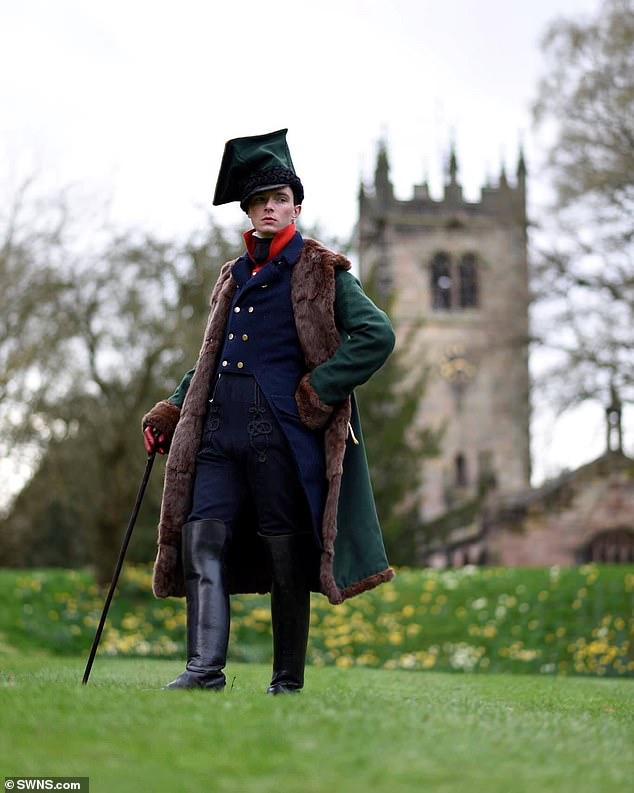 Zack, pictured with his cane and in riding boots, revealed he’s had many marriage proposals over his style and thinks it’s ‘indicative that women want a gentleman’

He said: ‘I was really tempted to dress up as someone from the 1780s and ask which century they meant, I decided against it but next time I will.’

All of Zack’s outfits are researched, designed and sewn by himself- with some outfits taking up to a year to perfect before he puts them on outside of the house.

Although people often stop in the street and stare, Zack says that people are usually really kind.

He said: ‘I keep getting comments in the street that it looks like I’m going to meet Jacob Rees-Mogg. 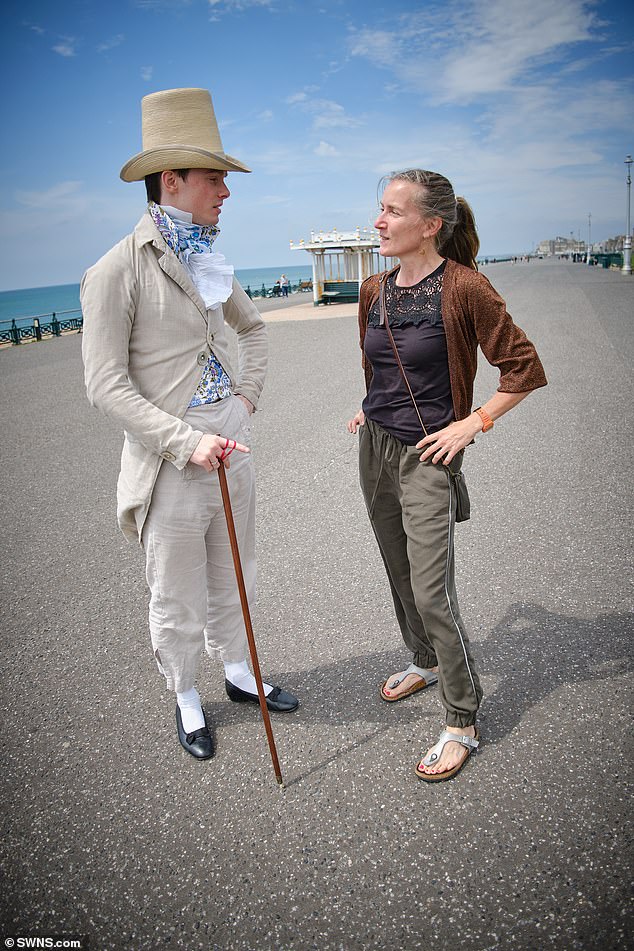 When stopping in the street over his unusual look, most of the reaction is positive. Zack, pictured in Brighton, said some people say he looks like he’s ‘going to meet Jacob Rees-Mogg’ 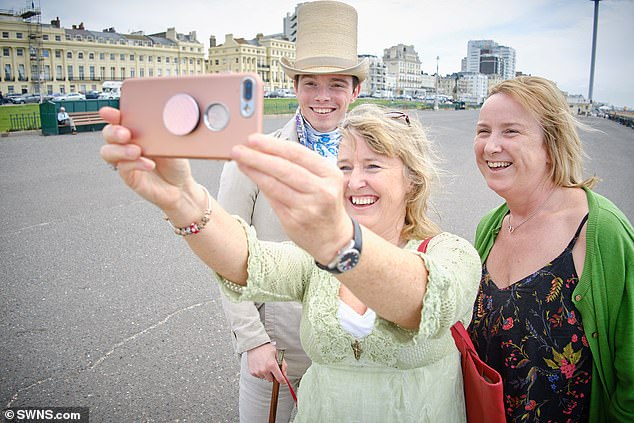 Zack, pictured with two women in the street, said that the positive reaction he gets is not just a ‘Brighton thing’ and that he’s had ‘lovely’ responses from people all over the world

‘The response is almost always completely positive, and genuinely lovely. And it isn’t just a Brighton thing, I’ve been all over the world and people are inquisitive and appreciative.

‘Even when I was in London and a huge group of football fans are walking towards me, my natural reaction was to tighten up and look down. But even then they were good-natured.’

Zack works as a tailor in Hove, specialising in bespoke historical clothing for men and women.

His client list stretches across the globe as Zack believes that there has been an ‘uptick’ in people’s interest in ethically sourced and hand made clothing. 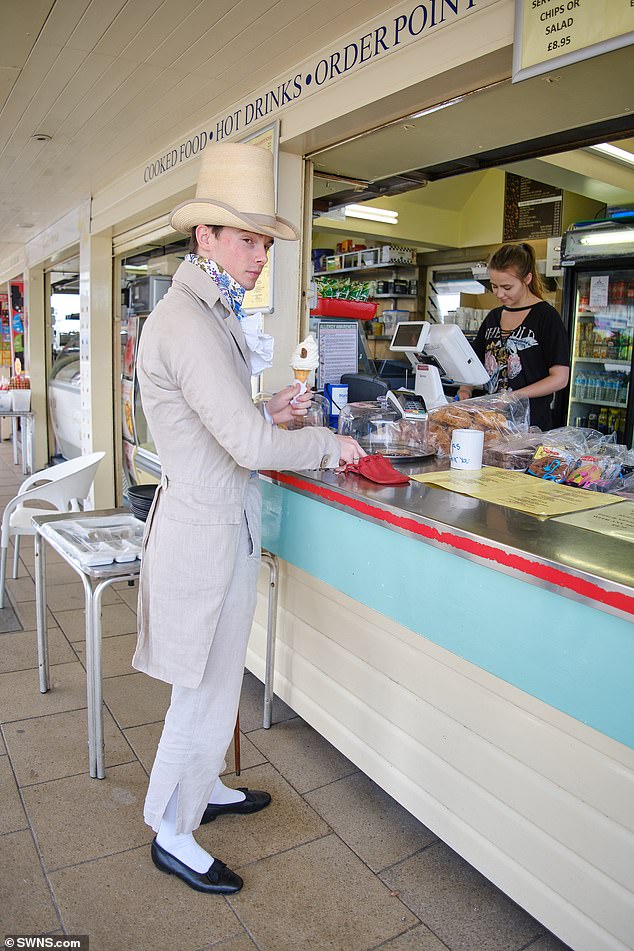 Zack, pictured using a cloth purse to buy his ice cream, works as a tailor in Hove specialising in bespoke historical clothing for men and women 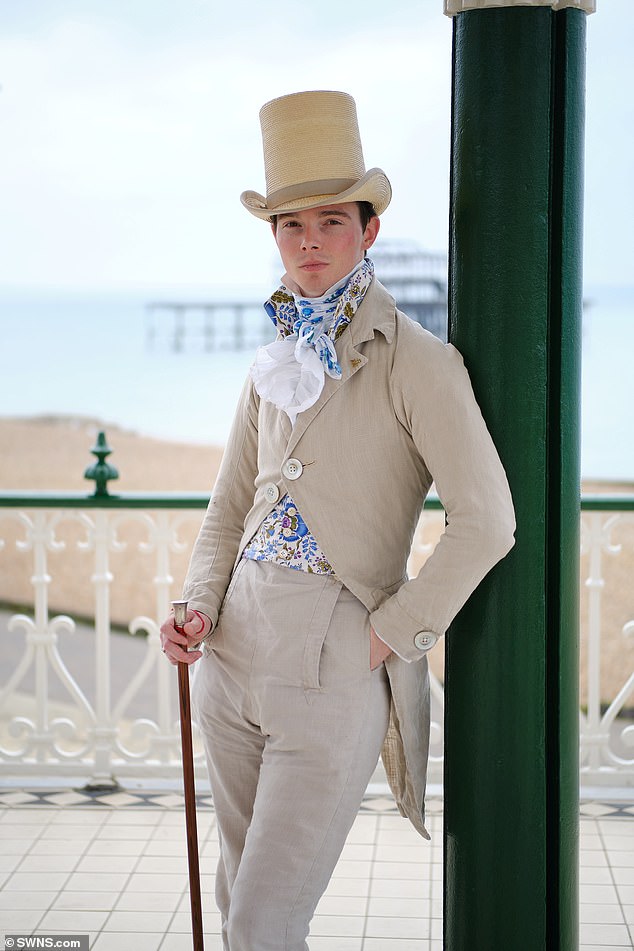 He said: ‘It’s my personal mission that to make sure everything is sourced in the UK and Europe.

‘My carbon footprint is as low as possible, I’m a British manufacturer and a British business using only 100 per cent natural fibres. I use no plastic at all in my clothing.’

In 2017 Zack revealed that wearing a t-shirt and jeans wasn’t an option for him but that he does have his own version of casual clothes.

He said: ‘If I am going to slum, I will wear an 18th century banyan, which is a fancy silk dressing gown. 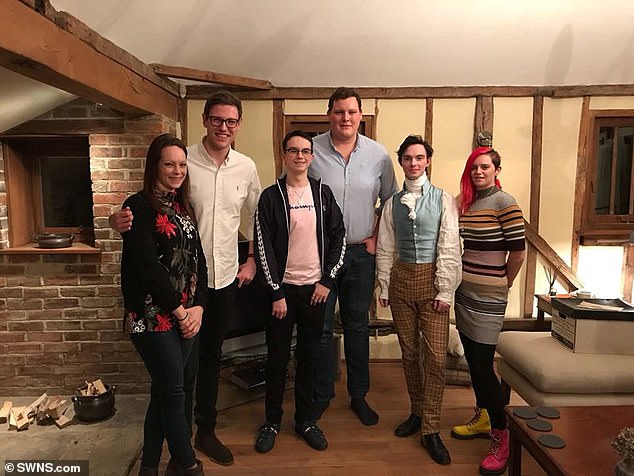 Zack, pictured with his family left to right Romi, Alex, Digby, Ben and Lana, has a large online following of around 40,000 people who keep up with his Regency-era style 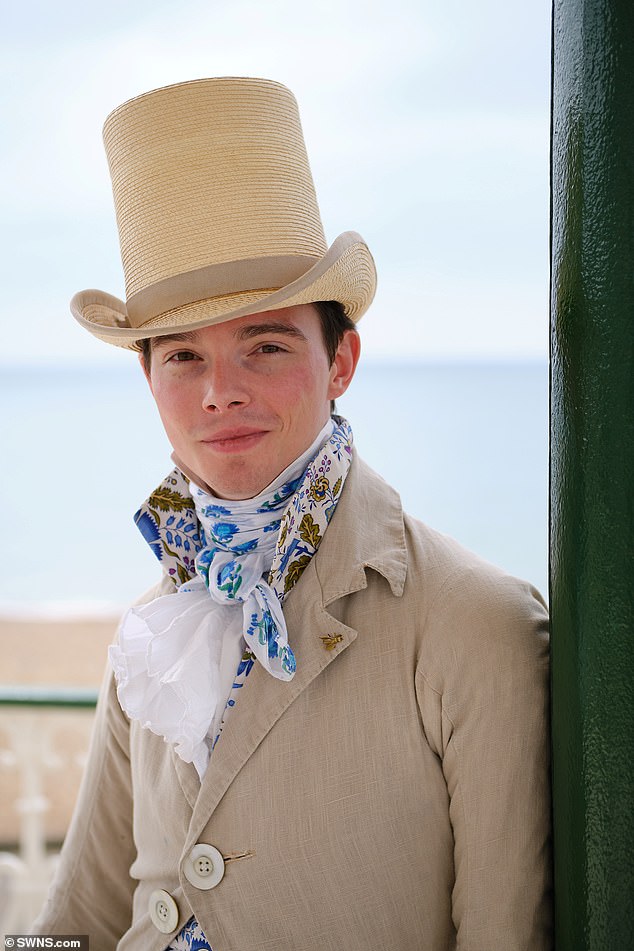 Zack, pictured, believes that there has been an ‘uptick’ in people’s interest in ethically-sourced and hand-made clothing

‘Why dress in jeans and a t-shirt if you can go along to Tesco dressed as Napoleon or something?’

Zack has a huge legion of online fans who adore his historical clothing, but has also been getting quite a substantial amount of interest from female followers.

He said: ‘I’ve received many marriage proposals and many other things.

‘I think it is indicative that women want a gentleman and someone that cares about his presentation and appearance.

‘For me, it is a bit of wrong tree wrong forest situation.’