Mom of Meighan Cordie, 27, who died after jumping from her car left holes in missing person report

Mom of Meighan Cordie, 27, who died after jumping from her car during a drunken row ‘left holes in missing person report’ as she reported her daughter’s disappearance

Questions have arisen over the account made by mother of a woman who died after jumping out of their car on the way home from a wedding.

Jennifer Weathers, the mom of Meighan Cordie, 27, filed a missing persons report the day after her daughter went missing.

Cordie’s death was ruled an accident this week after she was found dead by the side of a road in Oregon last month, however, a prosecutor has now released a memo that details major holes in the story her mother originally told authorities about her daughter’s bizarre disappearance.

Weathers initially told police she and her daughter were arguing in the car, but Yamhill County District Attorney Brad Berry  claims she never told police that Cordie had pulled out a clump of her hair., according to The Oregonian.

Meighan Cordie, 27, disappeared on August 18 on the way home from a wedding in rural Dayton, Oregon, and was found dead four days later by hikers

Authorities only learned of the quarrel’s physical nature after a detective confronted Weathers when the hair was found in her car.after finding the hair in her car, the memo states.

The mother also said Cordie ‘got out of’ the car, only to later tell investigators that her daughter actually jumped out, according to the memo.

Weathers told authorities that the car the pair were traveling in was moving at less than 5mph, but Cordie’s severe injuries suggest a speed far greater.

Cordie disappeared on August 18 on the way home from a wedding in rural Dayton, Oregon.

Her body, hidden at the bottom of the steep slope, wasn’t discovered until some joggers spotted it off the roadway four days later on August 23, Yamhill County District Attorney Brad Berry said at a news conference, according to Koin 6. 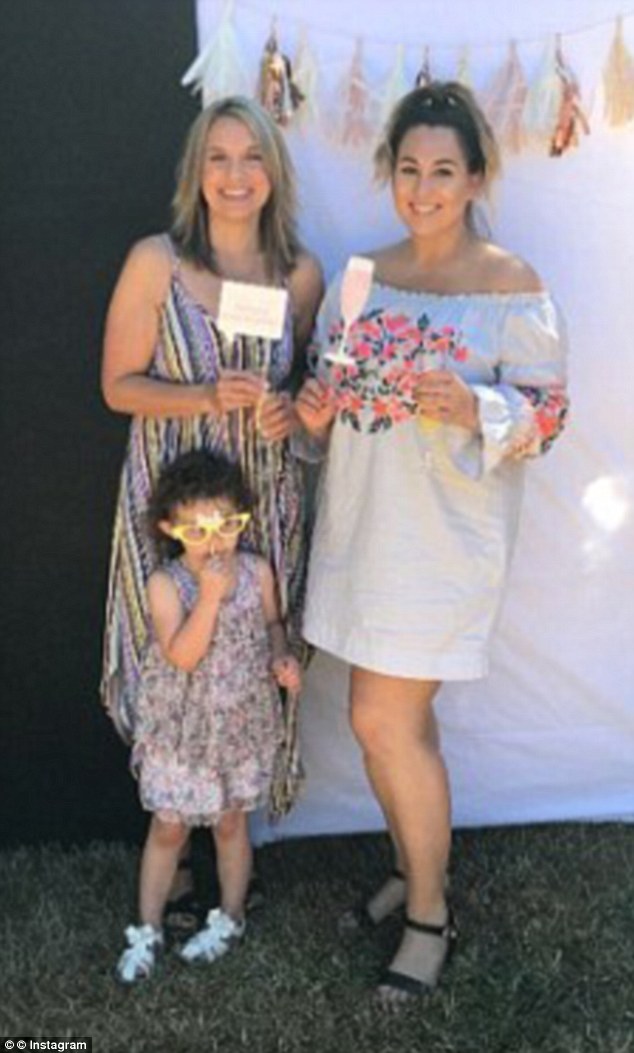 Cordie (right), with a woman described in the comments as her mom, Jennifer Weathers, and Cordie’s toddler-aged daughter 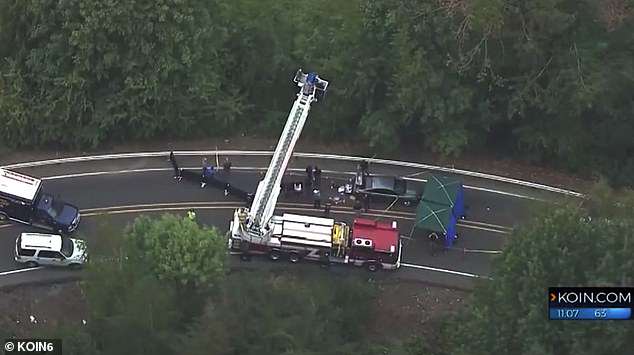 Cordie’s mother, Jennifer Weathers, 50, is not being charged in Cordie’s death, but she was cited for driving while intoxicated and reckless endangerment 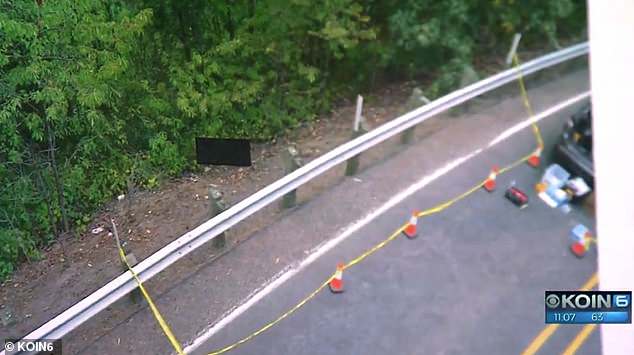 The guardrail is cordoned off as investigators probe the scene

Cordie did not wander off from the scene, but died instantly when she exited her mother’s moving car, hit her head on a guard rail and slid down an embankment, a prosecutor said on Thursday.

Also inconsistent was the location of the body. Cordie’s body was found barefoot nine miles from the location Weathers reported, however her feet didn’t have injuries relating to such a long walk, the memo states.

Weathers is not being charged in Cordie’s death, but she was cited for driving while intoxicated and reckless endangerment. Weathers has a court appearance next week. 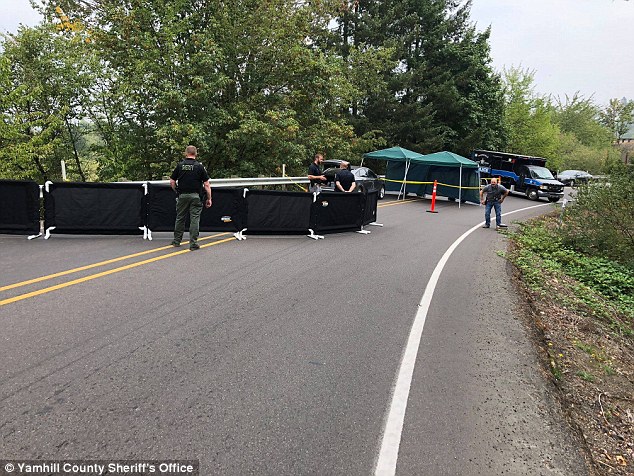 Authorities said Cordie died instantly when she exited her mother’s moving car, hit her head on a guard rail and slid down an embankment

The announcement provides the first public accounting of a bizarre disappearance that continued to baffle investigators even after Cordie’s body was found.

Search crews scoured the rural area of agricultural fields for days, believing that Cordie had left her mother’s car in anger during a fight on the way home from the wedding and walked into the dark alone without shoes or her cellphone.

An autopsy subsequently revealed she had suffered an aortic separation, likely after her back hit the guard rail, and also had head trauma, Berry said.

On Thursday, Berry described a complicated investigation that pieced together clues from the scene – including Cordie’s hair found in the guard rail – cellphone records, lie detector tests and interviews with Cordie’s three-and-a-half-year-old daughter who was in the car and witnessed the incident. 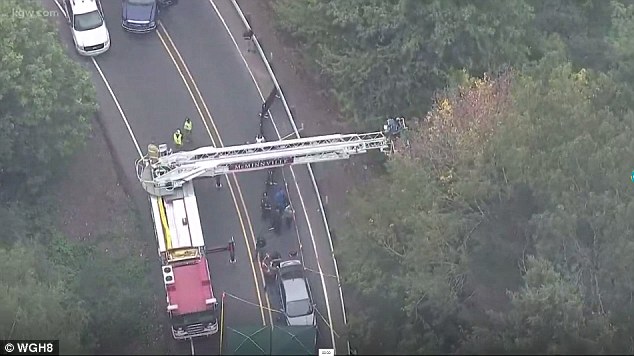 Cordie’s body, hidden at the bottom of the steep slope, wasn’t discovered until some joggers spotted it off the roadway four days after the incident, on August 23 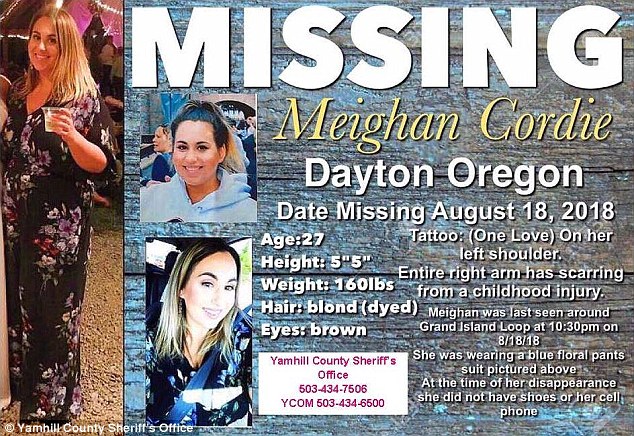 Cordie’s boyfriend overheard her fighting with her mother in a cellphone call that provided a narrow timeframe for the death, Berry said. And a clump of Cordie’s mother’s hair was found in the car, Berry said, indicating a violent altercation.

Investigators concluded the death was tragic, but was not a crime, he said.

‘Every crime consists of elements,’ Berry said of the decision not to charge Cordie’s mother. ‘We can prove elements of certain crimes (but) we just can’t prove all of the elements of a single crime. Clearly leaving her daughter there, if we’re talking right versus wrong, it’s hard for me to fathom that somebody would do that – but it doesn’t mean that I’ve got a crime.’

Berry said Cordie and her mother had a ‘difficult’ relationship and began arguing as they left the wedding.

The mother was intoxicated and wanted to stay longer, but Cordie wanted to get home because her young daughter was getting tired. Cordie got out of the car once, only to be coaxed back in by her mother. 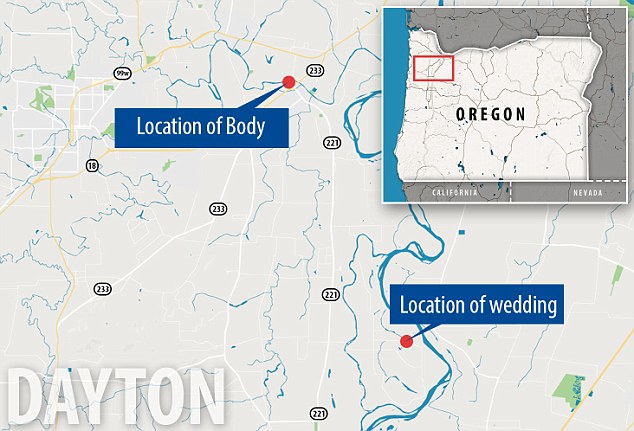 Cordie then called her boyfriend and asked him to come get her.

Then, the evidence shows, Cordie opened the car door and either fell or intentionally jumped from the moving car, Berry said.

Cordie’s young daughter told police her mother was in the backseat at the time.

The mother has not cooperated with authorities since taking an initial polygraph test and it’s unclear if she realized her daughter had been killed, Berry said. The results of the test were inconclusive, he said.

She told investigators that she had looked for her daughter in the dark and then went home.

Cordie’s mother has a court appearance next week on her DUI citation.